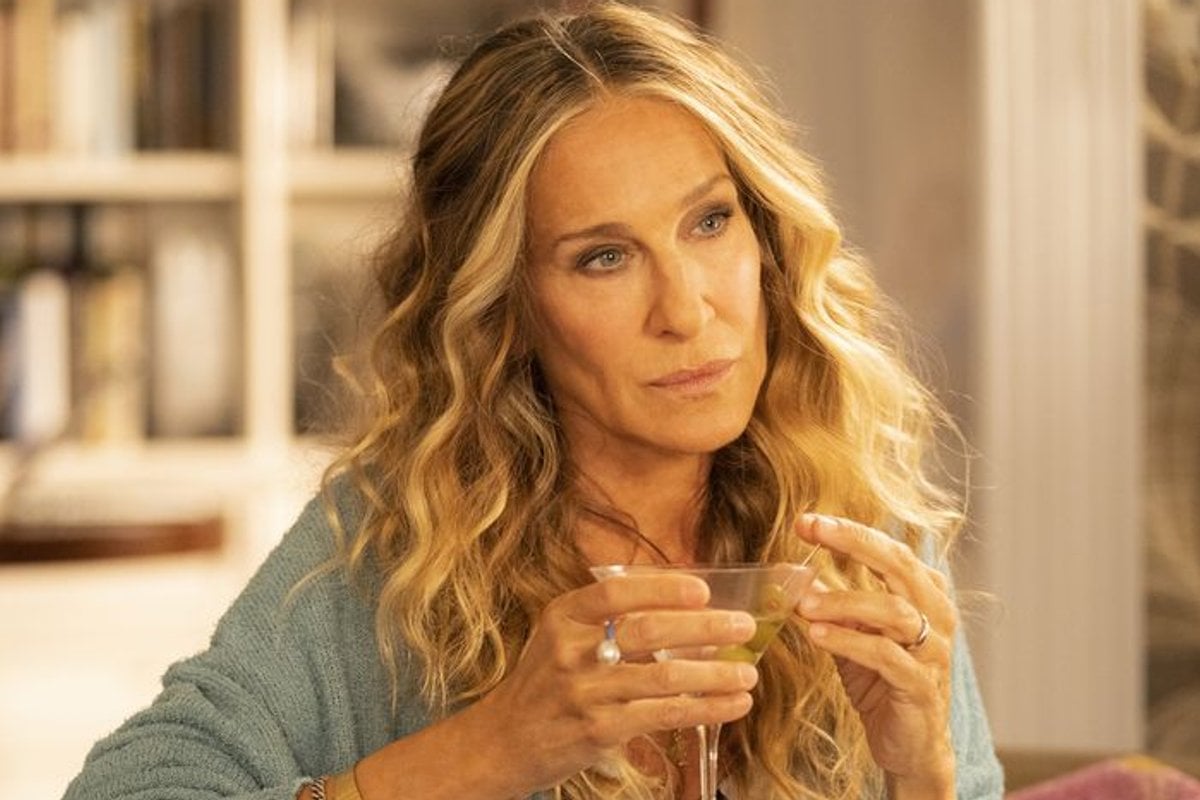 This post discusses alcoholism and may be triggering for some readers.

Sex And The City has had its ultimate reboot with And Just Like That - and in just six episodes, ours and Carrie's worlds have been turned upside down.

In what was the most unexpected plot twist ever, Mr. Big died in episode one and viewers were left to watch Miranda and Charlotte rally around Carrie to offer round-the-clock support for their mourning friend.

It's a glaring portrayal of loss, grief and an odd reminder of old Sex And The City days, where our main protagonist is left alone and without her Mr. Big, yet again.

However, with just one of the biggest plot twists slapping us in the face within the first episode, there are a lot of questions about what could possibly come next.

Turns out, a lot.

Here are all the fan theories surrounding And Just Like That that are circling the internet.

All Chris Noth scenes from this point forward will be deleted.

Reports are claiming that all the Noth scenes from episodes yet to air have scrubbed him from them, following the multiple allegations of sexual assault against him.

TVLine reported that Noth was set to return to an episode for one final time, in a fantasy sequence where Carrie reunites with Big while visiting Paris’ Pont des Arts bridge to scatter his ashes.

Following the multiple allegations that have been thrown at him, editors of the show have allegedly removed any future scenes of him.

Discussion for Season 2 have reportedly ... stopped.

While reports claim the entire cast and production were excited for season two, the Noth allegations have allegedly halted all conversations for another season.

“There was talk about doing another season, but after the past few days, all those conversations have stopped,” a production source told Us Weekly. “Everyone is raw.”

Four women have accused Noth of sexual assault since And Just Like That begun airing.

Nixon, Parker and Davis released a joint statement after the allegations broke.

“We are deeply saddened to hear the allegations against Chris Noth. We support the women who have come forward and shared their painful experiences. We know it must be a very difficult thing to do and we commend them for it,” it read.

Yep, you read that correctly. There's a rumour gaining rapid popularity, and it's that our beloved writer-turned-podcaster is apparently dead, and what we're watching is some sort of dream sequence in her last moments.

While it sounds interesting, we won't be betting much money on this theory.

Miranda will develop a problem with alcohol.

Possibly the most popular theory to hit the interweb involves Miranda, the corporate lawyer who chose to leave her high-paying job to go back to college and gain some critical insight. However, we have a funny feeling that Miranda's biggest lessons won't be taking place in the classroom.

There were a few key moments eagle-eyed watchers wouldn't have missed, and that was Miranda's excessive drinking. Theories for the new season predict she will have to face this issue head on - and it looks like that has come to be true, with Charlotte spotting the problem and sharing her concern with Carrie. How the situation will evolve though? We'll have to keep watching to find out.

It wouldn't be very surprising either, as Cynthia Nixon has made it clear AJLK will dive into deeper issues and attempt to face them with bold new methods not previously explored on Sex And The City. 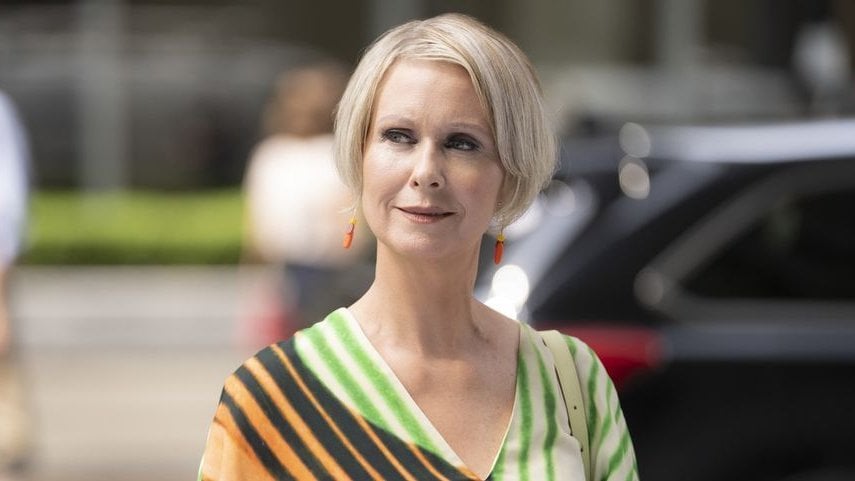 Miranda in And Just Like That. Image: HBO Max.

The writing for AJLT is itching for Samantha's return.

Many have asked why Samantha's character, played by Kim Cattrall, wasn't killed off during AJLT, considering the actress has been open about her refusal to rejoin the cast for the reboot.

Well, it turns out the writers are reportedly leaving her character "open", in the hopes she may return for season two. While we wouldn't hold our breath, it seems like everything is pointing to a possible reunion - even if Samantha's stay isn't a permanent one.

Someone is set to have a sexual awakening... but it's not just Miranda.

In episode two, we watched Miranda have a light-hearted exchange with Che just moments after screaming at them for giving weed in the form of a vape pen to her teenage son, Brady. It set Twitter into a stir, with theories that she may have a sexual reawakening and realise she isn't straight.

And for fans who are up to date with their episodes will have seen that Miranda has a hot and steamy moment with Che in Carrie's kitchen - meaning that she's a) cheated on Steve and b) is about to question her sexuality in a big way.

However, fans are theorising that Charlotte may also have her own sexual awakening this season too. We're not too sure how that is going to play out, but we will be keeping a close eye out for it during the next couple of episodes.

Rose will have a teenage-fuelled rebellion.

Anyone who watched the first episode saw as Charlotte and her pre-teen daughter Rose went head to head on what exactly to wear to her eldest daughter Lily's recital.

While we're not exactly sure when, fans are certain a teenage-fuelled rebellion is on the precipice for Rose - likely tied to her desire to be non-binary - and it may just be the moment Charlotte is forced to face her impossible standards of perfection in a lesson from her own children. 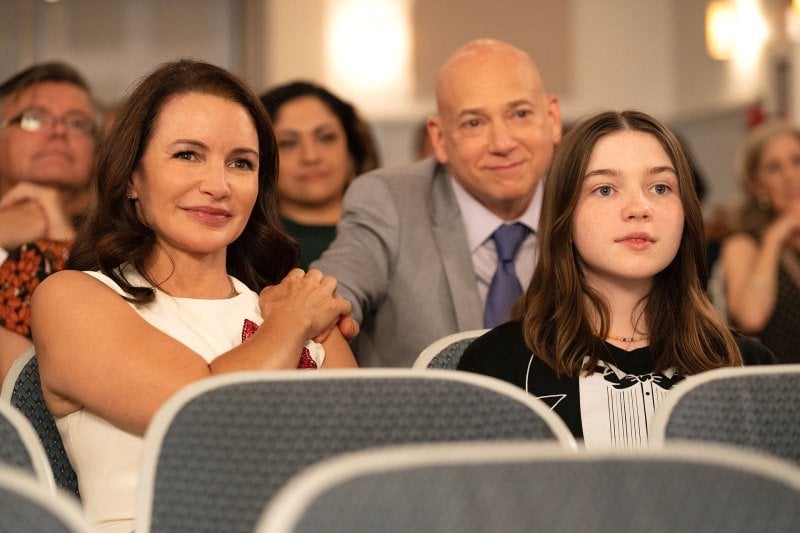 Charlotte, Harry and Rose in And Just Like That. Image: HBO Max.

While we can't be sure of anything at this point, it's clear from the first two episodes that absolutely anything is on the cards for the first season of the Sex And The City reboot.

And just like that, we can't wait for another episode.

Reply
Upvote
1 upvotes
TBH I’m in two minds that we are punishing someone before their day in court. I know I will receive backlash from that comment but that is how I feel. I am not saying that those ladies are incorrect in fact I feel for them and the affect that something like this would have ongoing in their lives. They are brave to come forward. But if we continue to judge prior to looking at evidence as a society I worry
E
emmaontour3 7 months ago

Reply
Upvote
Che is a they not a her, come on Mamamia do better

Thank you for flagging. The article has now been amended.