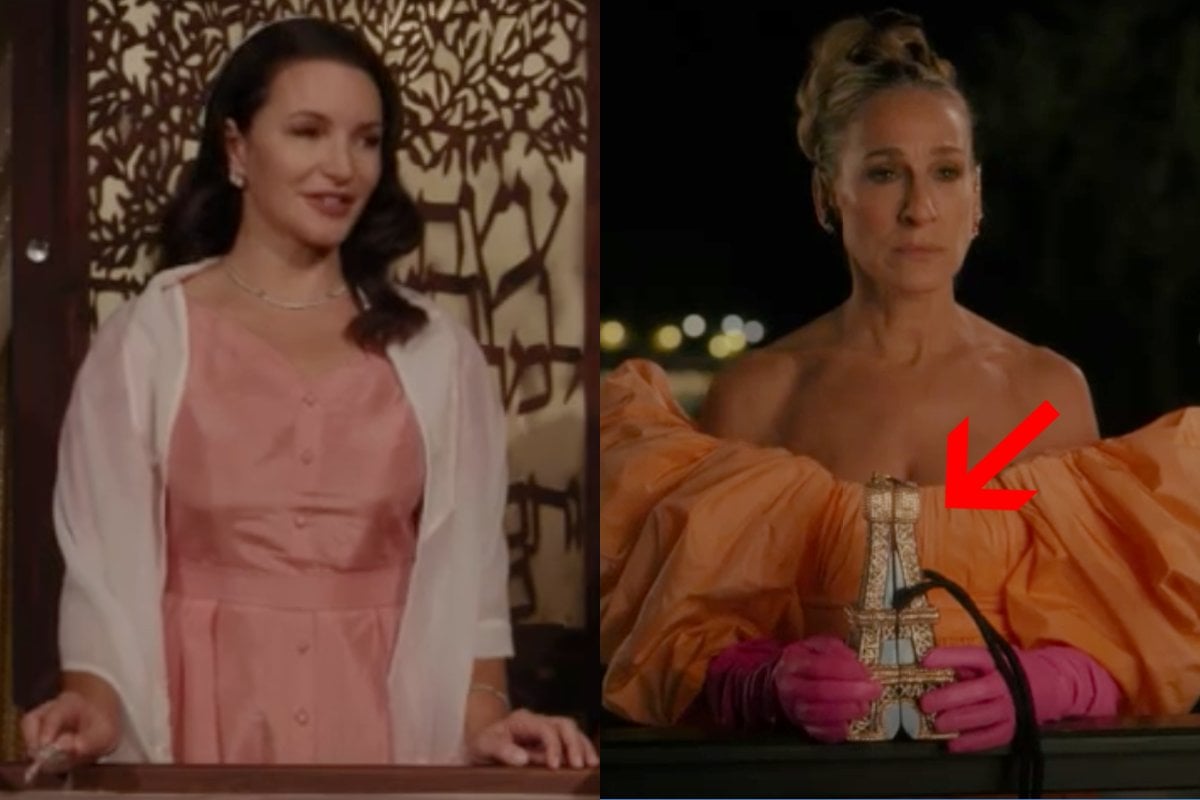 Ten weeks ago, streaming service Binge finally released the highly anticipated Sex and the City reboot, And Just Like That.

Carrie, Miranda and Charlotte are back on our screens (you can read about why there's no Samantha here) along with returning and new faces. And this time, they're navigating friendship, love, and family in their 50s.

The reboot has introduced us to plenty of new characters and storylines but it is also packed with subtle references and nods to the original series.

Below you'll find all the subtle Easter eggs we've spotted in all 10 episodes of And Just Like That. And there's a good chance you missed a bunch of them.

Episode One: Hello It’s Me.

In the first few minutes of the debut episode, a familiar face from the original series returned: socialite Bitsy Von Muffling (played by Julie Halston), who greets the three women at brunch, asking where "the fourth Musketeer" is. 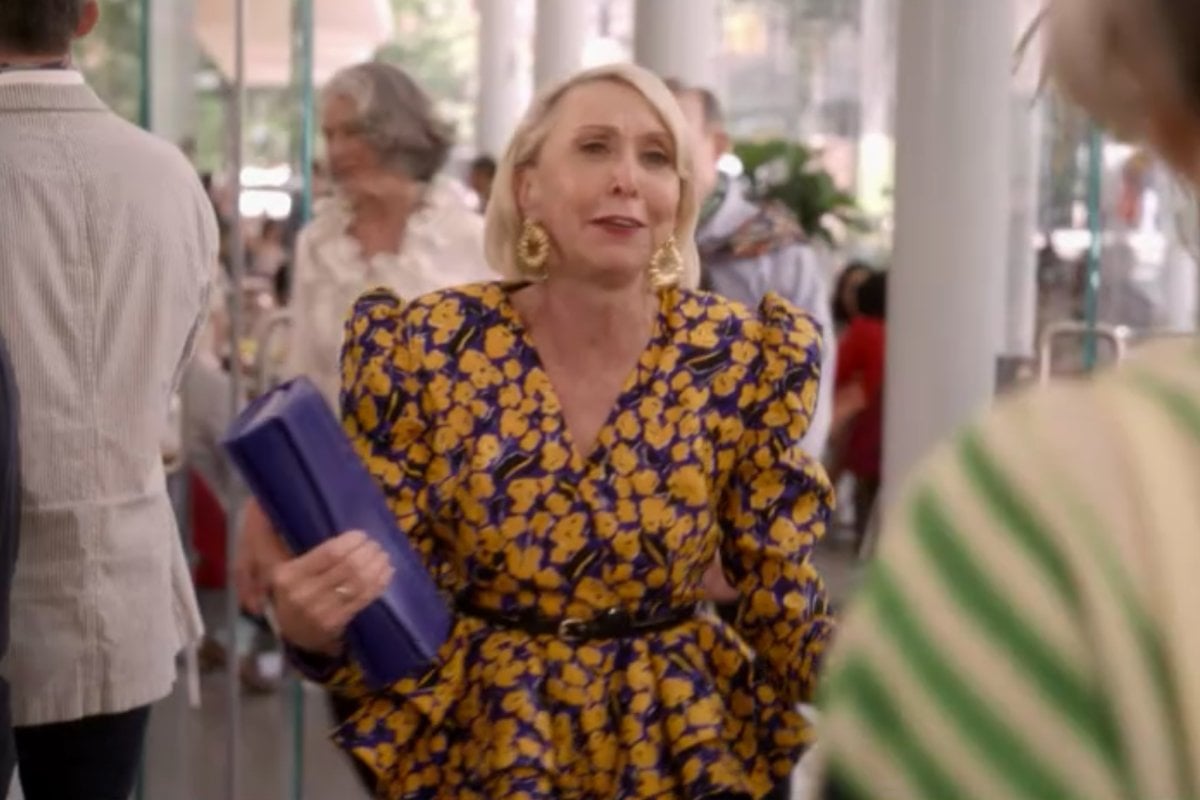 Bitsy first appeared in Sex and the City in the season five finale, when she married cabaret singer, Bobby Fine, whom the women assumed to be gay.

Bitsy then returned to the series in season six, glowing and pregnant, much to everyone’s bewilderment.

She also made a small cameo in the first SATC film, sitting next to Stanford Blatch at Carrie’s rehearsal dinner.

In SATC, Charlotte was a huge Elizabeth Taylor fan. She was inspired by the Hollywood icon's conversion to Judaism and named her Cavalier King Charles Spaniel after her.

Sadly, it just wouldn't make sense for Charlotte's failed show dog to still be alive in And Just Like That. So, in the reboot, the Goldenblatts have a new pup, named after the actress's fifth (and sixth) husband, Richard Burton. 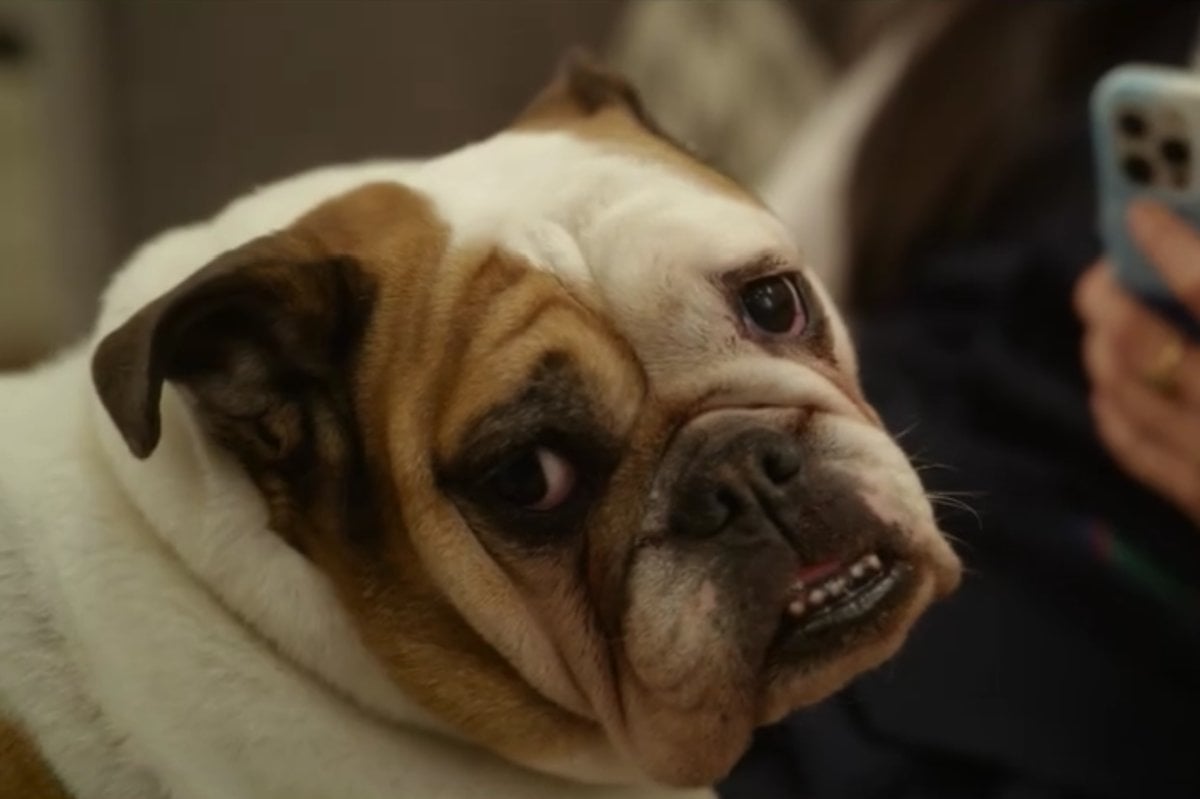 Big remembering Carrie keeping her jumpers in the oven.

Everyone remembers Carrie's storage hack from Sex and the City: storing her jumpers in the oven. Big even remembered it in And Just Like That.

"I remember when you kept your sweaters in the stove," Big told Carrie in the first episode.

"I remember when your hair was black," she quips back.

When catching up with Carrie and Big, we learn they've been going through Big's record collection as a nightly ritual during the pandemic. Carrie picks one out to play before Big sings and dances around the room. 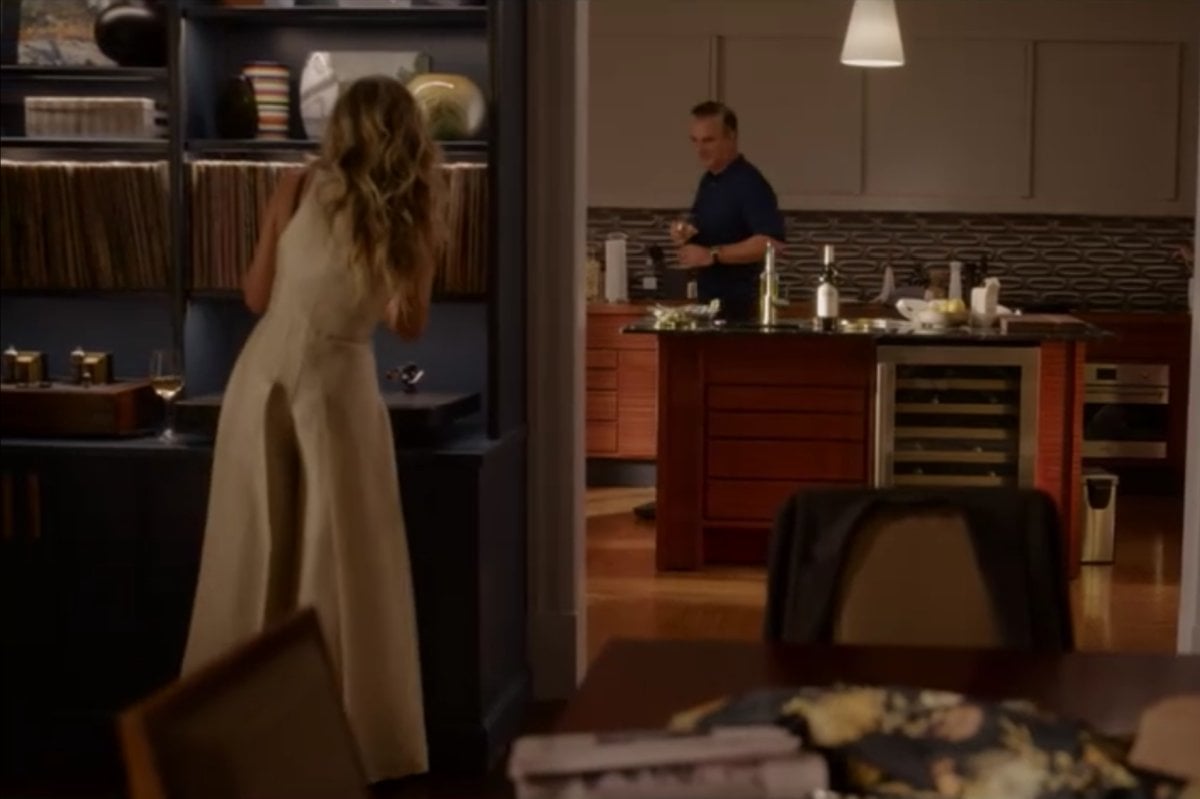 In the original series, his record collection was mentioned multiple times.

"What about your music?" Carrie asked Big in season two. "If I had to listen to freaking 'Blood, Sweat & Tears' one more time..."

Then during the season four finale, Carrie also commented on Big's vinyl collection, before they danced to 'Moon River' in his empty apartment.

If you look closely in Carrie and Big's apartment, you'll spot Carrie's first book, Sex and the City, displayed in the bookshelves. 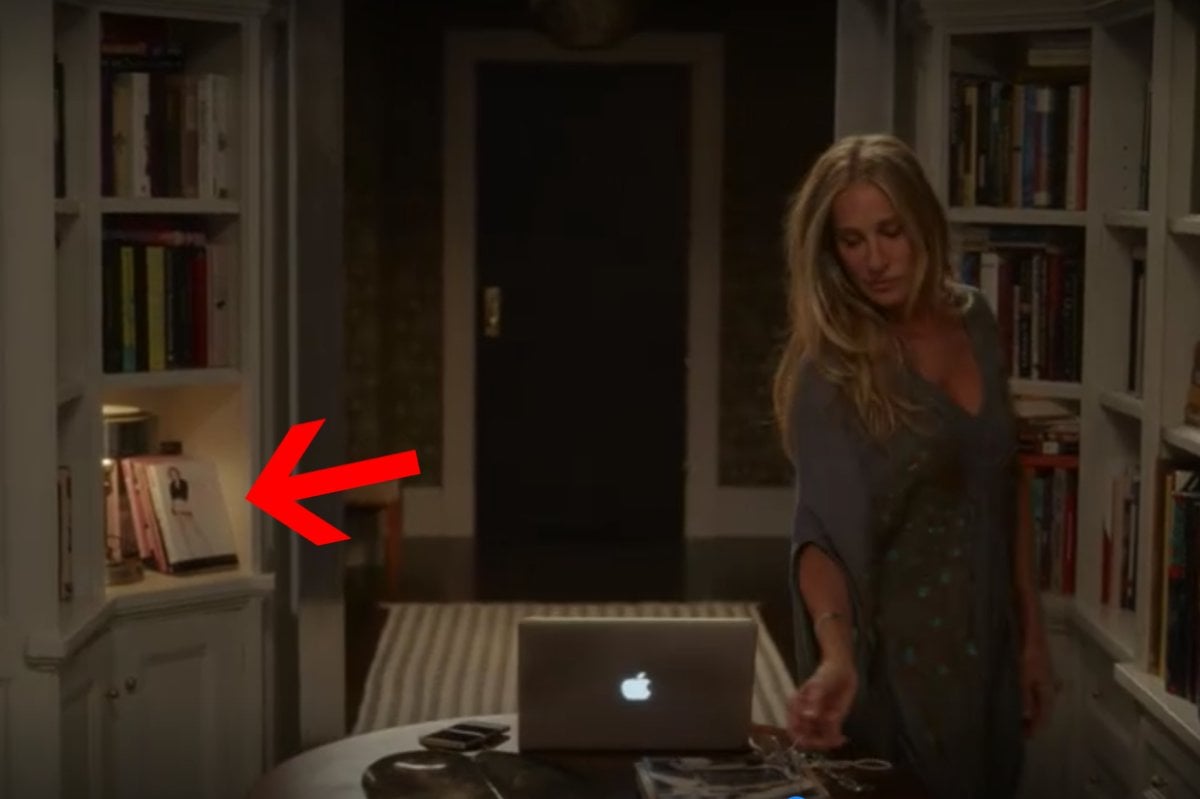 The publication of this book played a role in series five of the original show, in which episodes centre around her cover photoshoot and book launch party.

Before leaving for Lily's piano recital, Carrie is seen greeting her shoe collection and picking her most iconic pair to wear out: the blue satin Manolo Blahnik pumps she bought in the first film, which Big later used to propose to her, and she wore on their wedding day.

"Hello, lovers," Carrie said as she grabbed them - a phase she uttered back in season four when spotting a pair of strappy heels while shopping with Samantha. 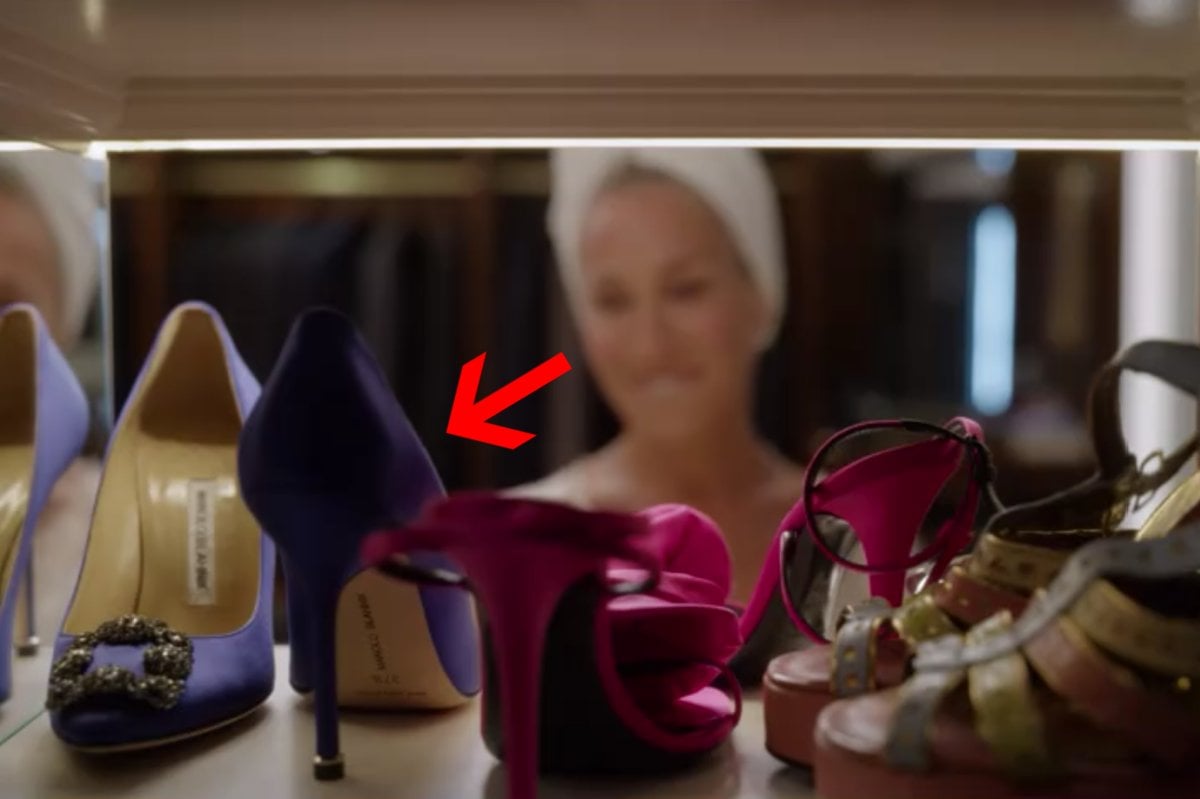 The shoe choice only made the end of the first episode that more devastating.

i’m so jealous of everyone that doesn’t know what this means pic.twitter.com/ITLFTiYkVe

The Manolo Blahnik's weren't the only fashion reference Carrie wore in the first episode.

She also wore a Chanel giant flower brooch, the same one she wore way back in season three.

A post shared by Every Outfit on Sex & the City (@everyoutfitonsatc)

A nod to Carrie's favourite cocktail.

Much like her love for Manolo Blahnik's, it was a well-known fact that Carrie's drink of choice was a cosmopolitan. And during the first episode, Anthony made reference to them.

While having a tiff with Stanford at Lily's piano recital, Anthony tells Carrie: "I hope you like your cosmos with a side of drama."

The song during the final credits.

During the closing credits after the fatal shower scene at the end of the first episode, The Source and Candi Staton's 'You've Got The Love' begins to play.

It's the very same song they used at the end of the original series finale, when Big's real name, John, is finally revealed.

The second episode features lesser references to the original series, but one we spotted was the return of another familiar face, "friend" Susan Sharon (played by Molly Price), who first appeared in season two of the original series.

Susan first met Carrie when she was unhappily married to an overbearing husband. After asking Carrie whether to leave him, she did, but Susan ended up unhappy about her decision and left things on bad terms with Carrie.

Susan later appeared in season four, when Carrie was engaged to Aidan but didn't want to tell her. 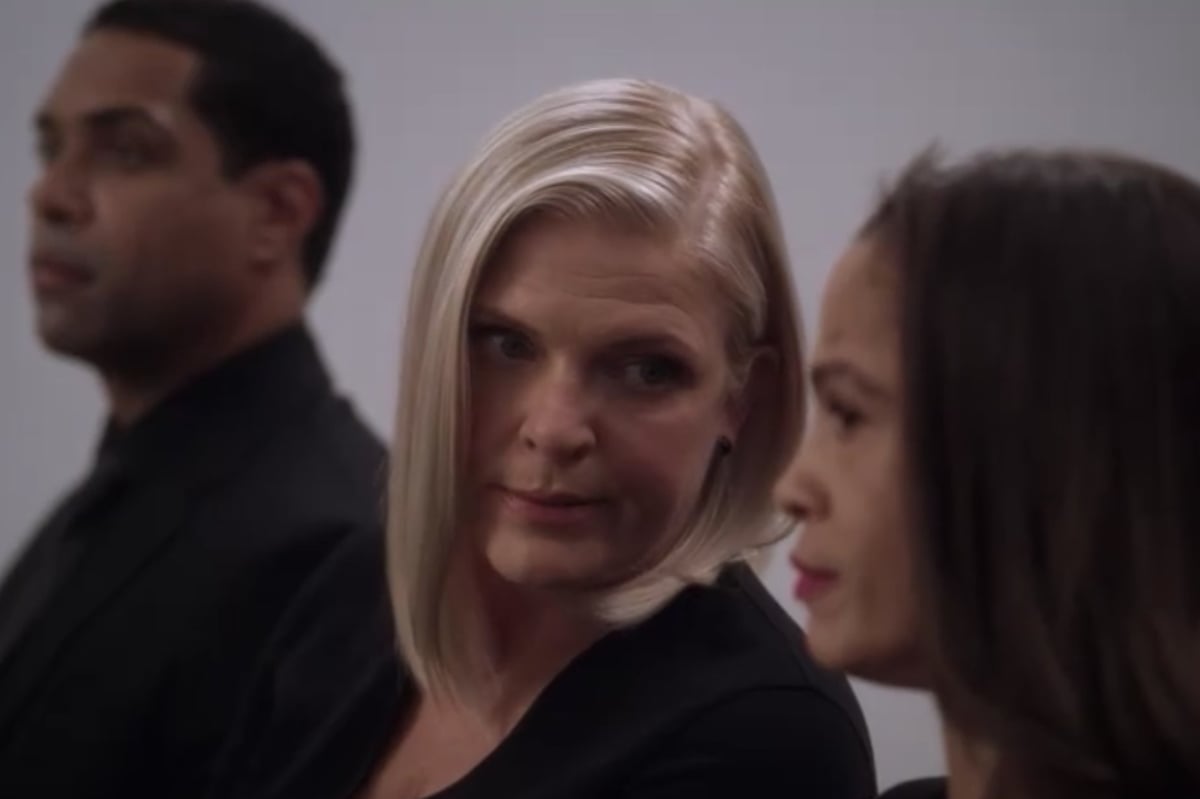 At the funeral she said: "Am I the only one who remembers what a prick he was to her?"

Later in the episode, she approached Carrie to tell her that she no longer holds a grudge against her, which Carrie has no recollection about.

"What happened between you two?" Miranda asked. "I have no idea. I was hoping you knew," Carrie replied.

Episode three: When in Rome.

An old photo of Carrie and Big reappears.

More subtle references to the original series are seen scattered around Carrie and Big's apartment.

During episode three, when Carrie does some digging about Big's past, a photo of the couple can be spotted on the nightstand. 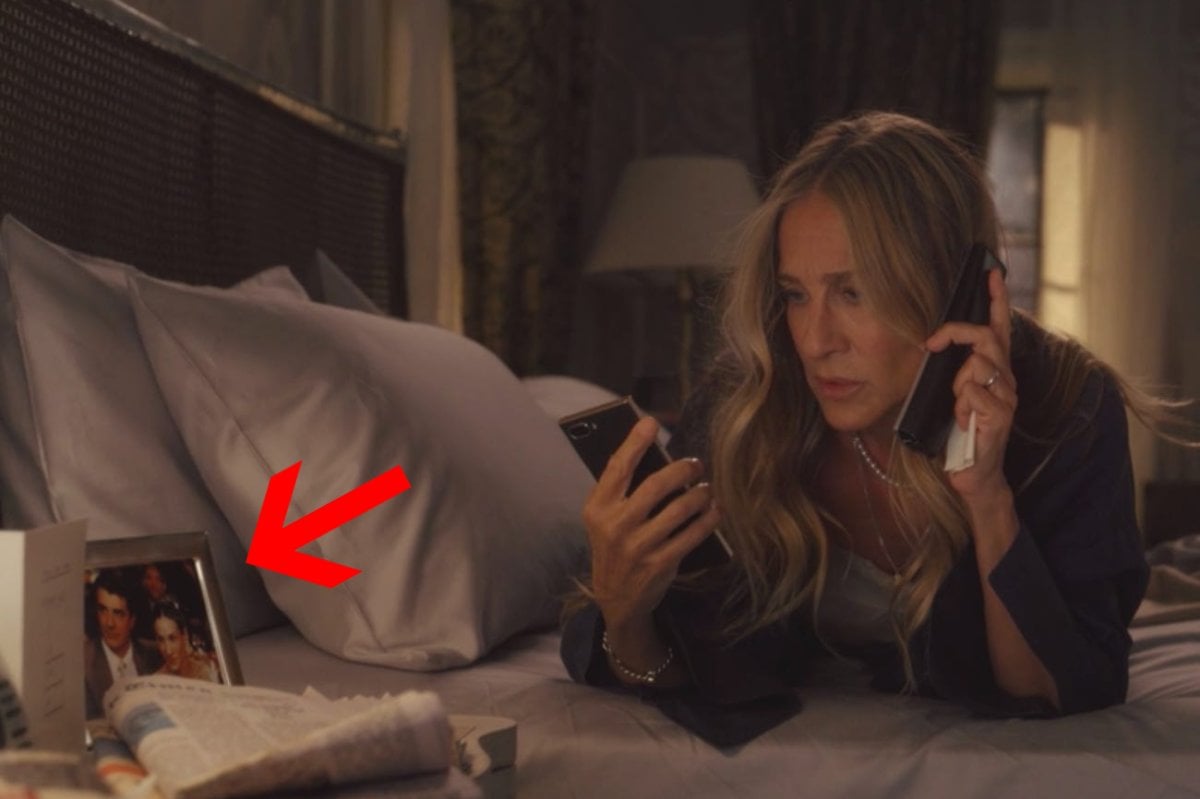 The snap looks to be a still from a season two episode, "The Man, the Myth, the Viagra", in which Big calls Carrie his girlfriend for the first time.

Episode four: Some of My Best Friends.

In the fourth episode, Harry and Charlotte attend a dinner at Lisa Todd Wexley’s home, where they’re the only white couple. Before entering the apartment, Charlotte noticed Harry was already perspiring.

"Did we seem nervous?" Charlotte asked LTW following the dinner. "He sweat through his suit," she replied.

Fans of the show will remember that refers to Harry's habitual sweating, a feature which initially turned Charlotte off him.

When Carrie’s real estate agent and soon-to-be friend, Seema Patel, compliments the patterned wallpaper in her apartment with Big, Carrie swiftly replied, "My husband wasn’t a big fan of beige."

This is a reference to a season three episode of the original series, when Big and Carrie run into each other with their new significant others - Natasha and Aidan.

While attending a furniture show, Big confesses that everything in his home with Natasha is beige, saying, "Beige is bullsh*t."

The return of the "Carrie" necklace. 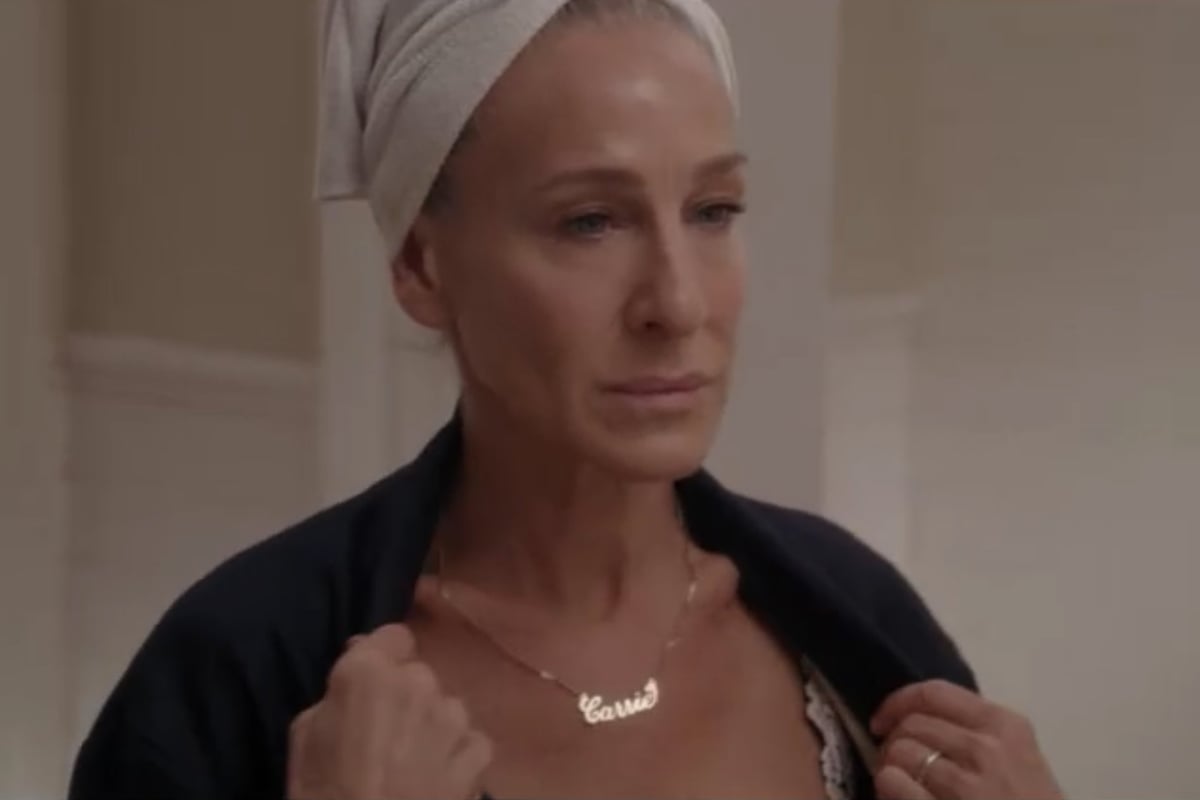 In episode six, Carrie is seen putting on her gold "Carrie" necklace before sorting through a box of Big's items. And anyone who watched the original show will remember just how important that piece of jewellery is.

Episode seven: Sex and the Widow.

Carrie doesn't like her publisher's choice of book cover... again.

In episode seven, Carrie meets with her publisher to discuss the cover of her next book where she writes about Big's death.

But, like we saw when Carrie published her first book in Sex and the City season five, she wasn't happy with any of the options provided. 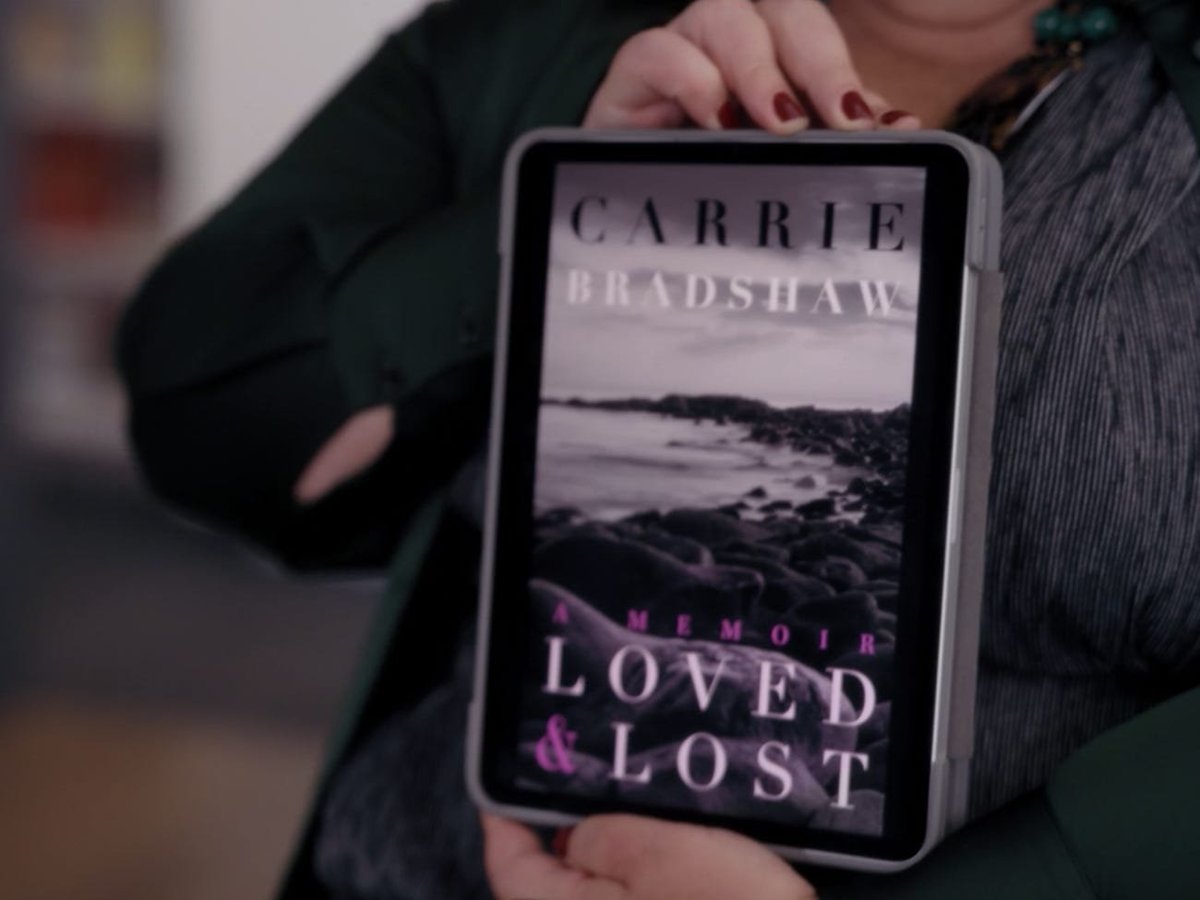 Carrie wrote her book at her apartment window.

In the opening and closing shots of episode seven, Carrie can be seen at her apartment window writing on her Macbook - a shot that was used often in the original series. 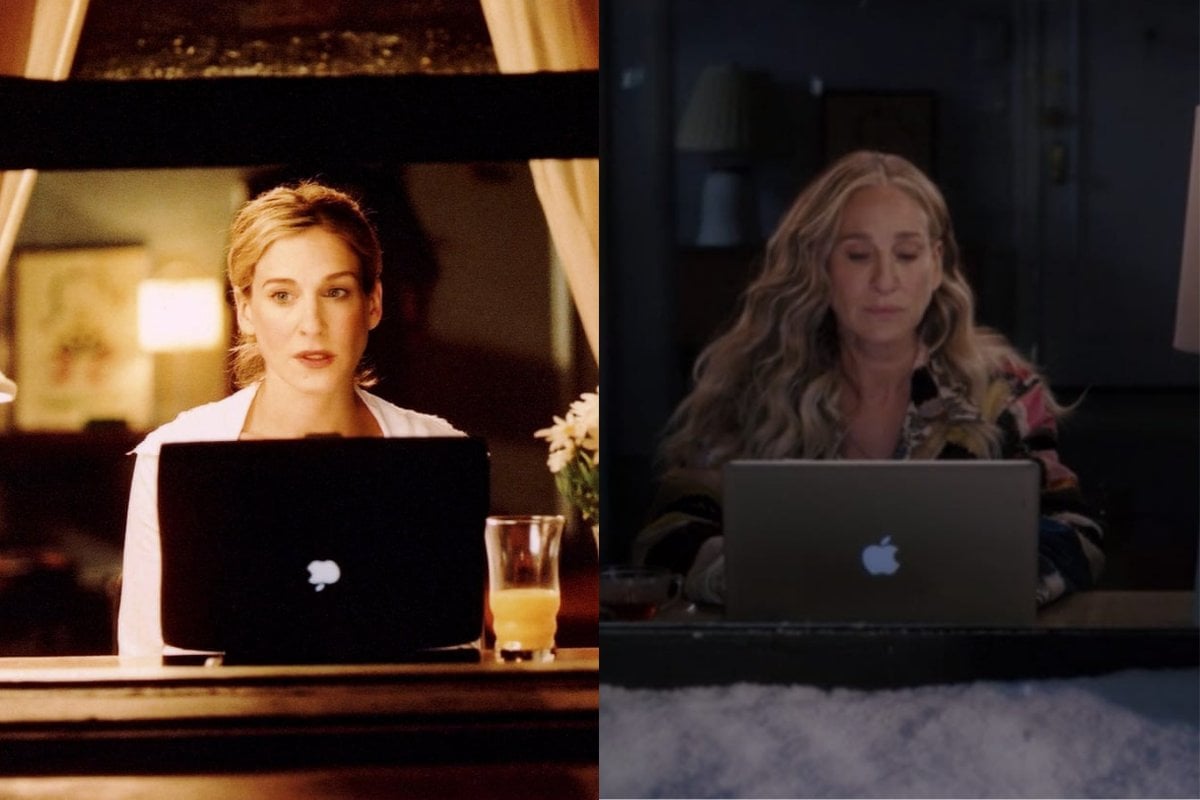 This time, we see the seasons changing to show the passing of time as she writes her book.

The dress we've been dreaming about since SATC ended has made an appearance.

"Do you want to see something amazing?" Carrie asked Seema in the eighth episode. "I don’t wanna brag, but it is my pride and joy."

Carrie then retrieved the sparkly, tulle-heavy Versace gown she wore in the original show's finale in Paris. 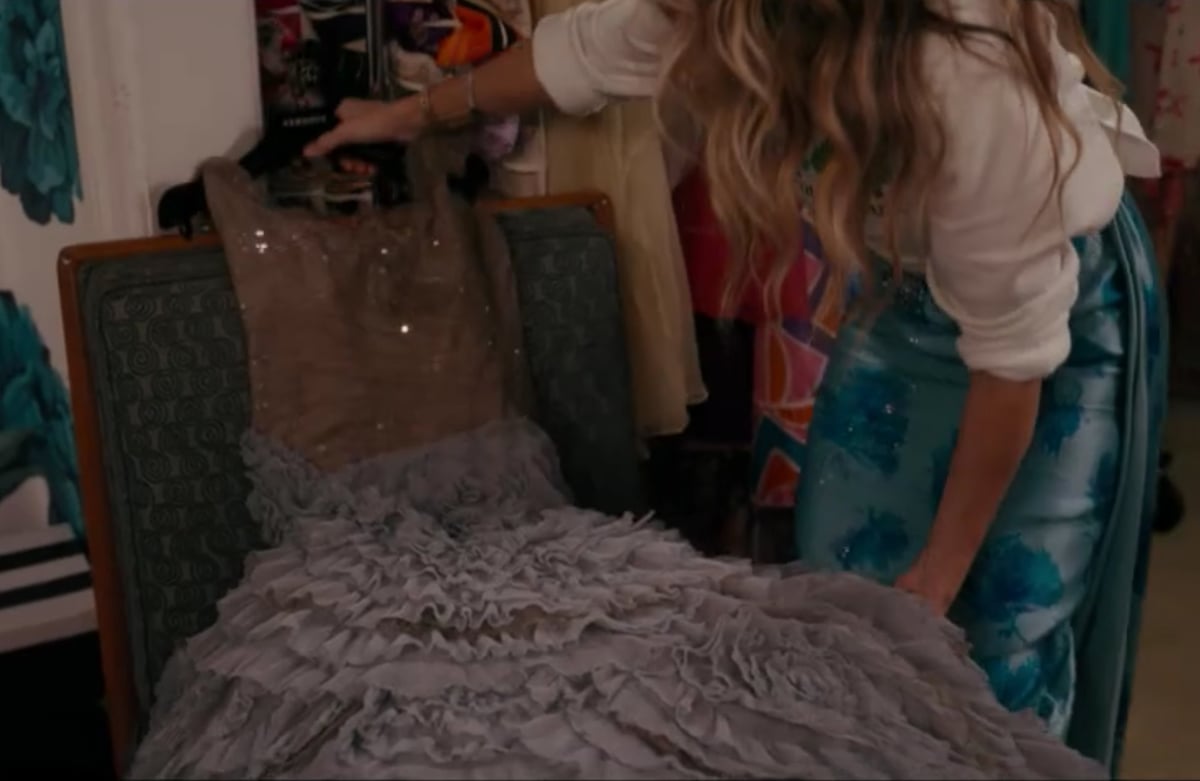 The episode ends with Carrie wearing the gown, sitting on her windowsill.

When appearing on Mamamia's fashion podcast What Are You Wearing?, And Just Like That's costume designer Molly Rogers explained that the gown was scripted to appear earlier in the season.

"The Versace gown was actually supposed to be a duvet that she uses in bed when she comes back to the apartment that night from the comedy club and she doesn't have any bedding," Molly said on the podcast.

"But it was August and Europe was on vacation when we found out they wanted to use it as a duvet and we couldn't get it," she added.

"It would've been fabulous."

Later in the episode, Lily can be seen wearing Carrie’s floral-embellished poncho when helping her organise her closet. 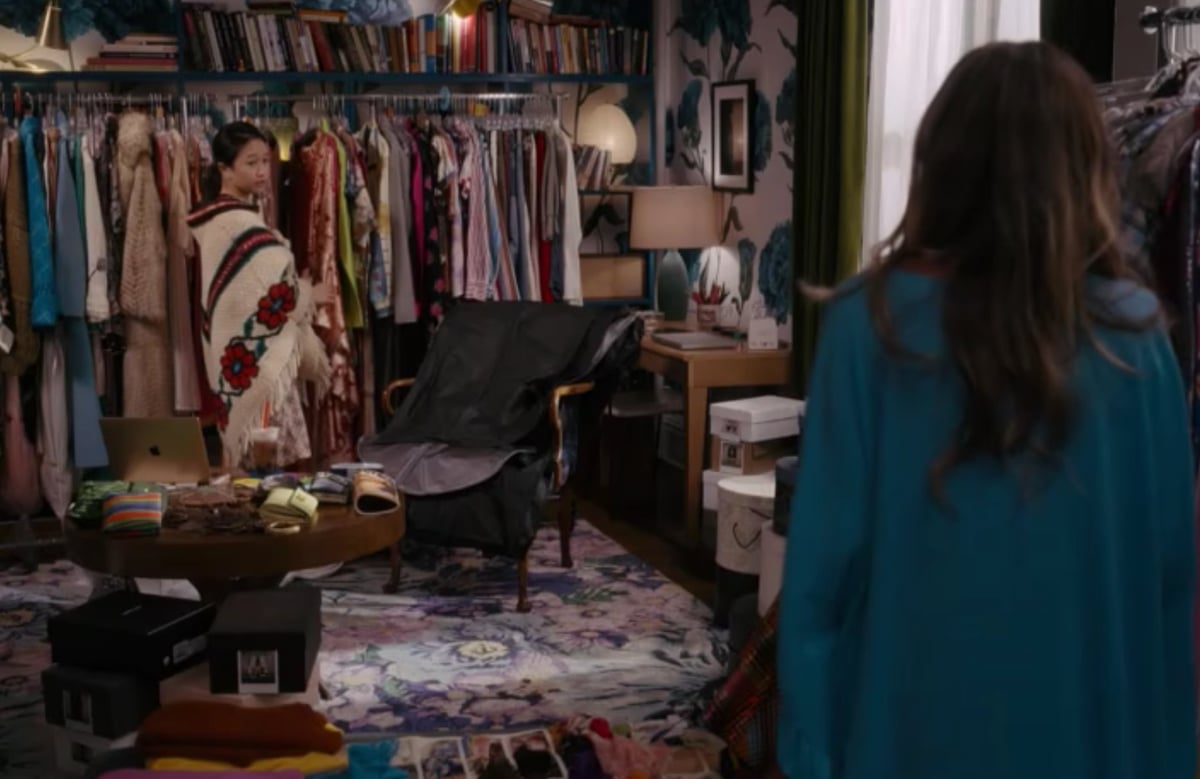 Fans of the original show will remember this piece from season two, where Carrie wore it when arriving late and hungover to a New York Magazine photoshoot. 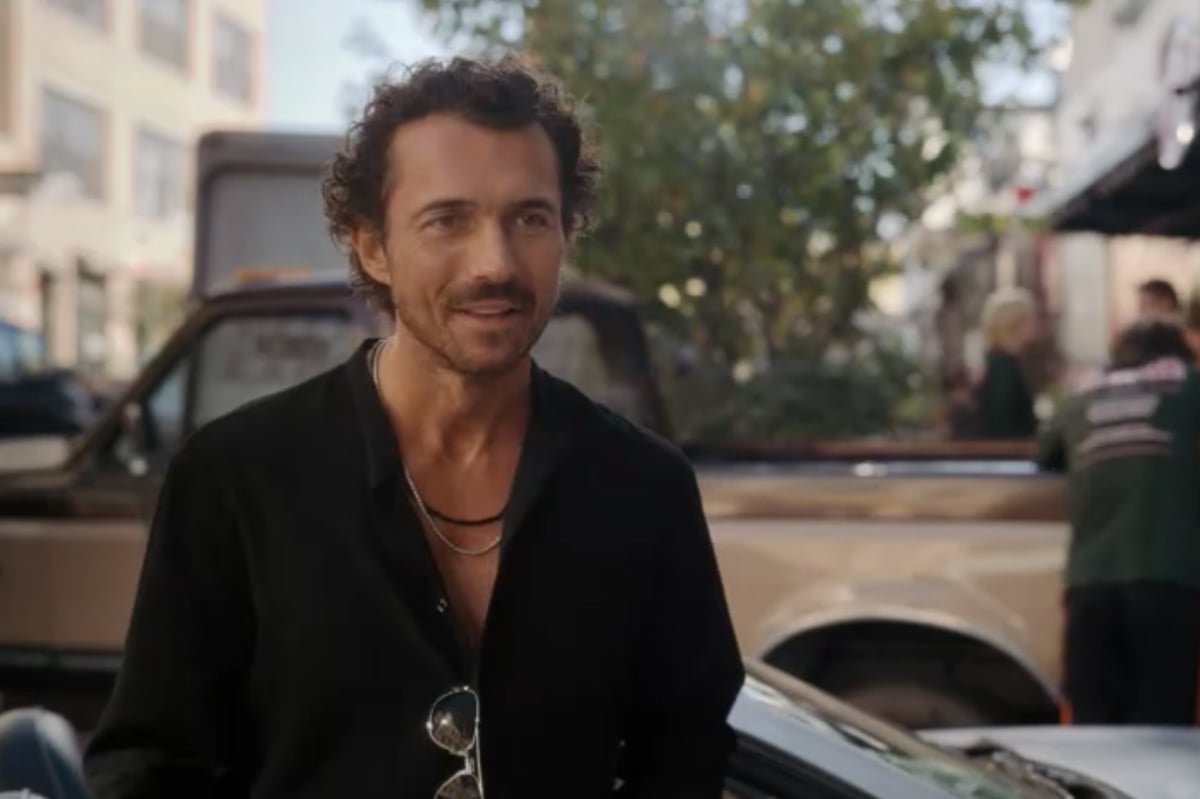 Not only is French actor William Abadie in Netflix's Emily In Paris, but he also played the friendly sales associate at Prada whom Carrie introduces Berger (Ron Livingston) to in the original SATC series. 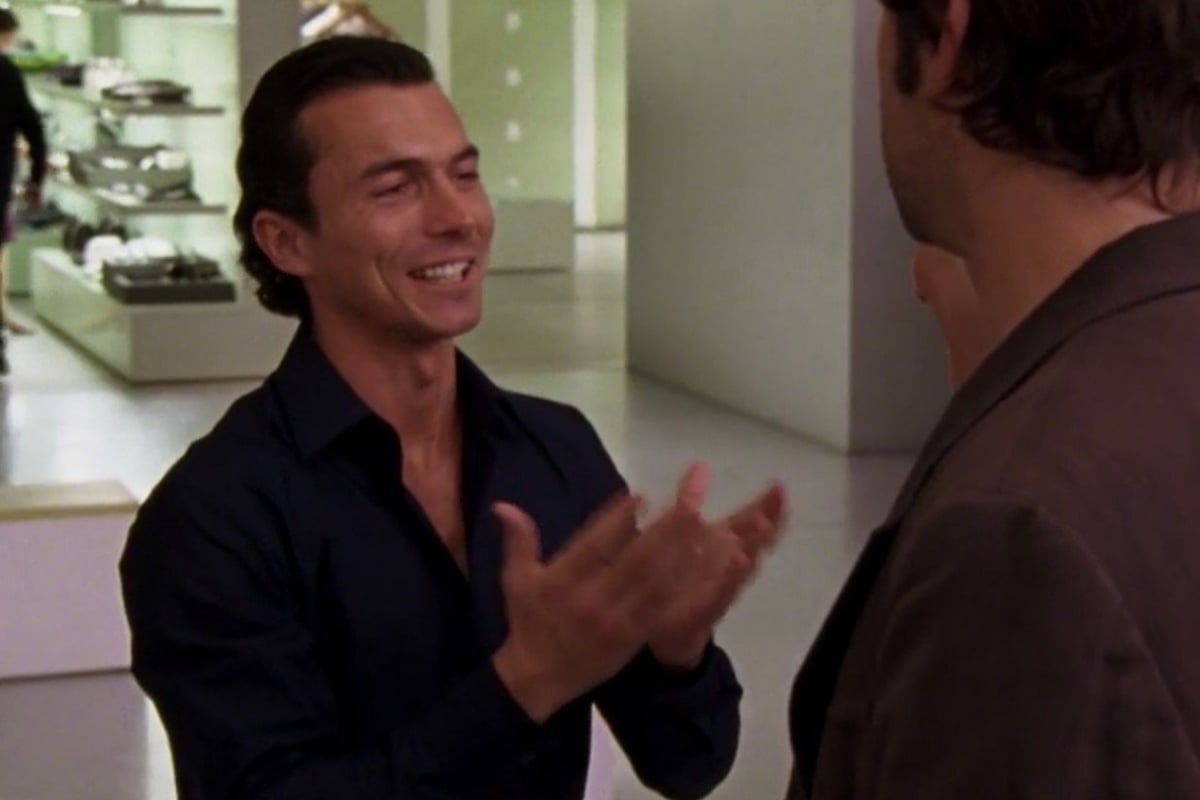 In the final episode, we see Charlotte and Miranda come full circle.

Charlotte has her own bat mitzvah when her child Rock won't go through with their "they-mitzvah". Fans of the original show will remember when Charlotte famously converted to Judaism for Harry in season six, but she never actually had a ceremony. 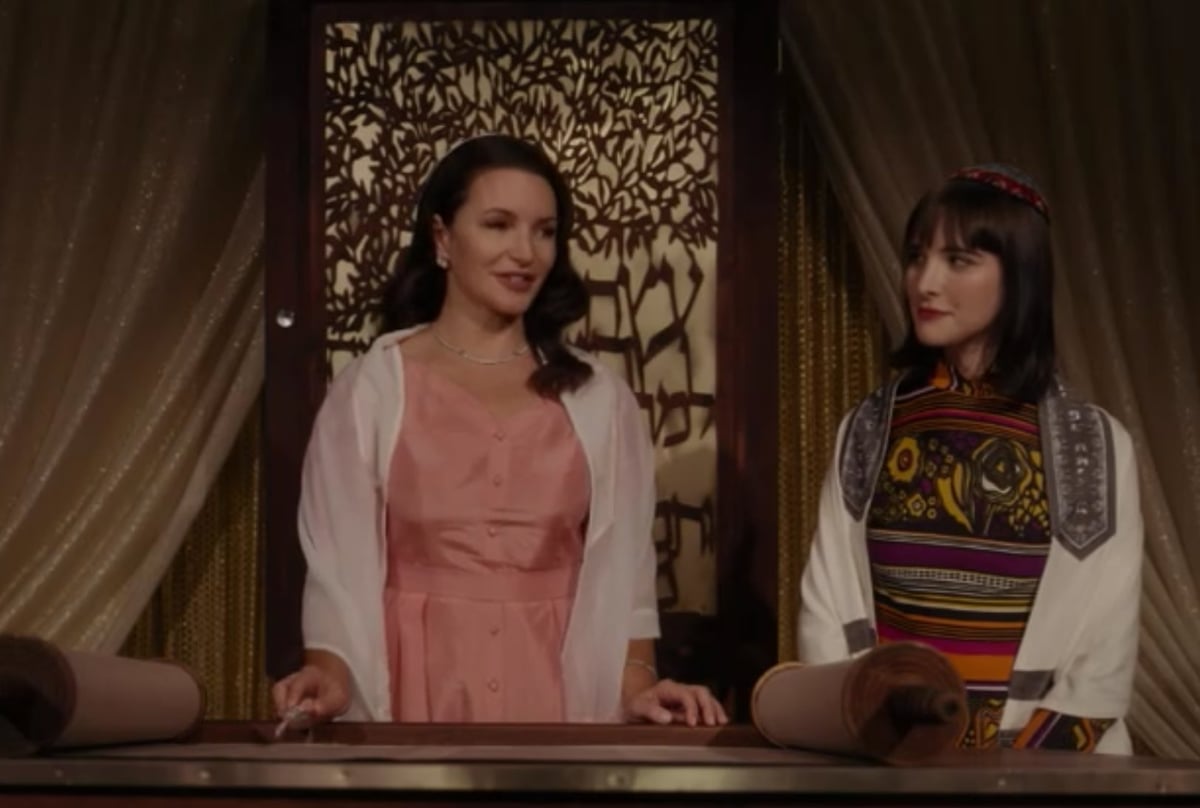 When her son, Brady comments on the new hair, she replied: "Hey, I had it first." 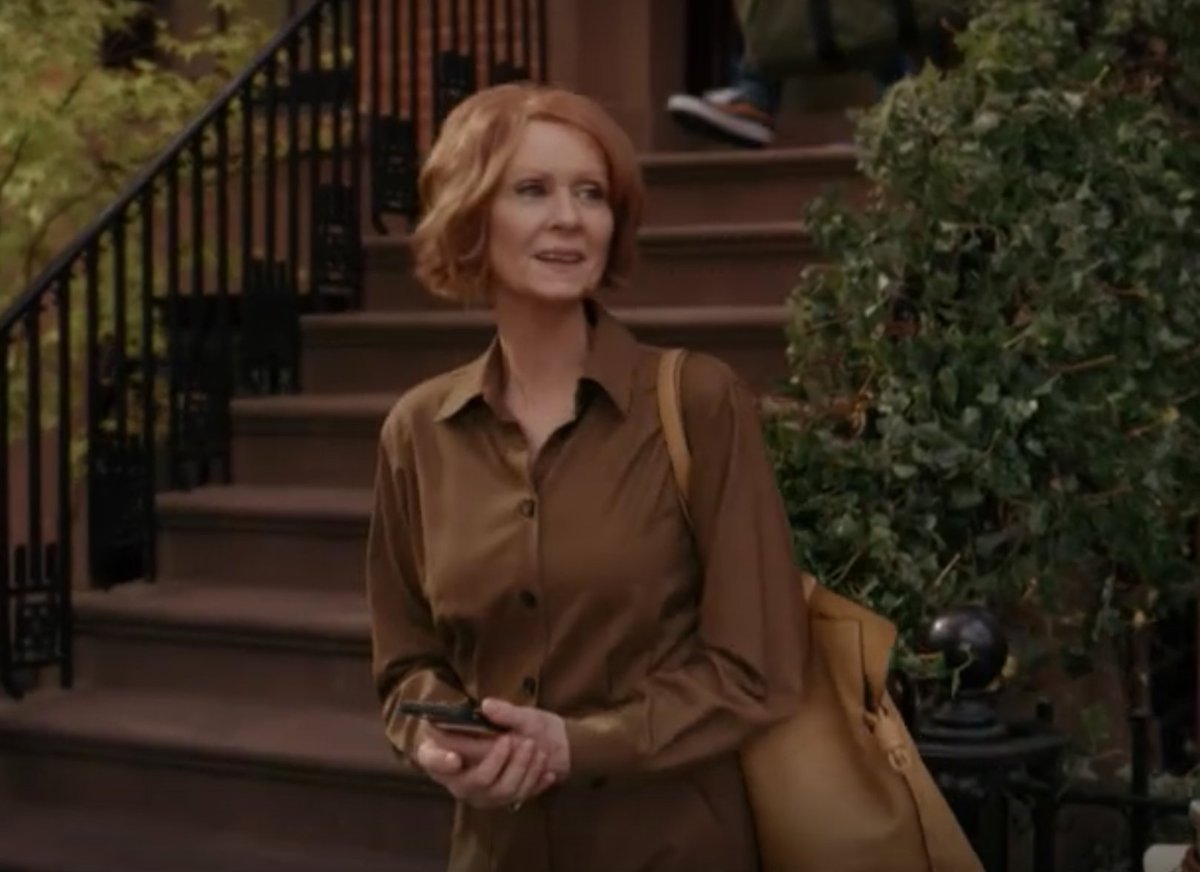 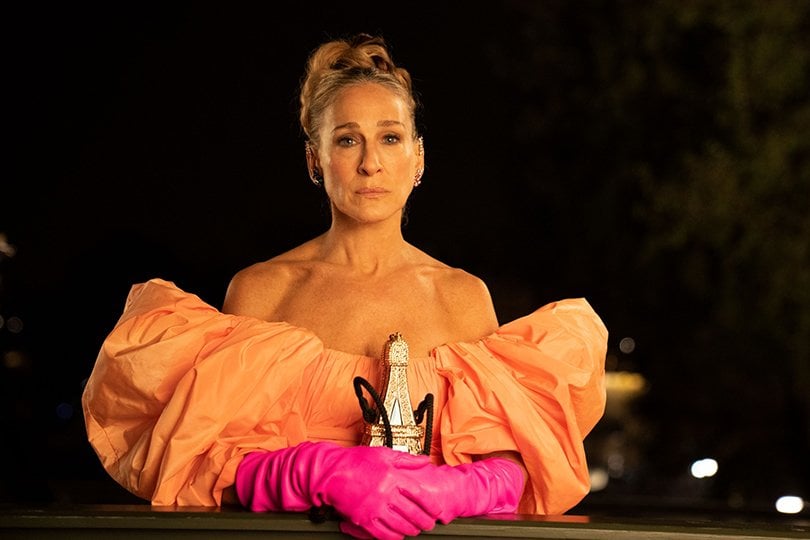 If you're a die-hard SATC fan, you'll remember this Eiffel Tower bag from the first movie.

It was the same bag Carrie used when she and Big went apartment hunting. 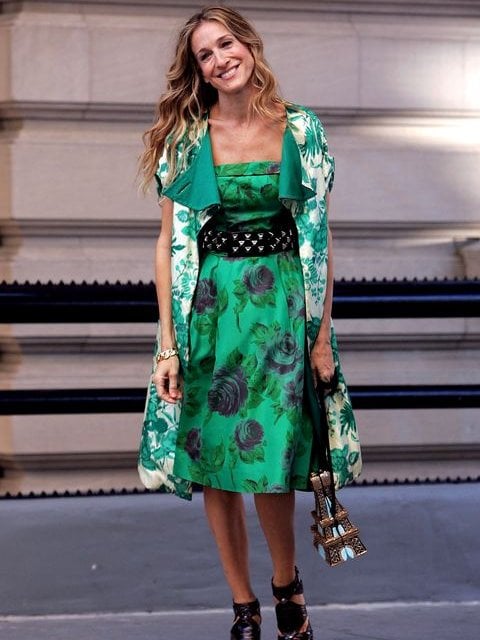 The Carrie necklace returned... in secret.

And lastly, a secret Easter egg you won't have seen: the Carrie necklace in the finale.

In And Just Like That… The Documentary, which dropped this week on Binge, Sarah Jessica Parker and the show's costume designers decided it wouldn’t feel right for Carrie to wear the necklace during the somber scene where she scatters Big's ashes. Instead, Parker kept it hidden in her bag.

"Why don’t I just put it in my purse where it was, where I found it?" she said. "And that will just be for us."