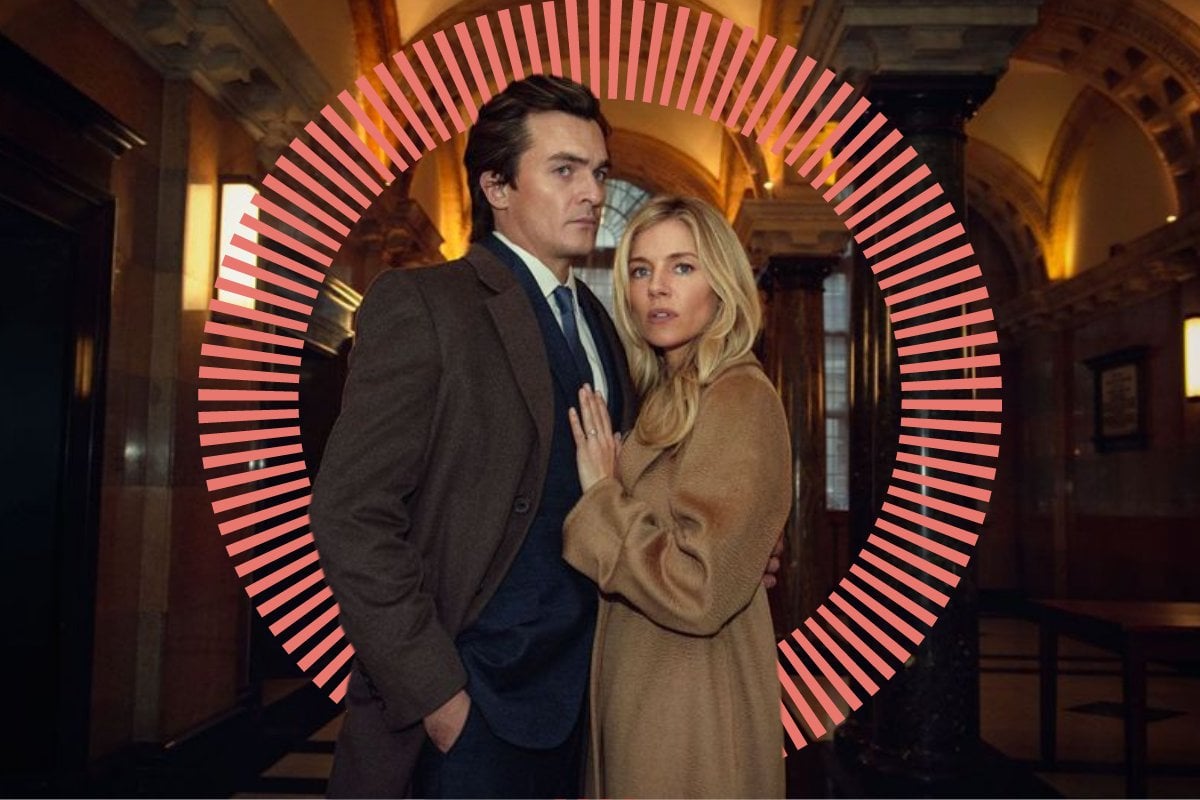 Content warning: This article and series deals with sexual assault and may be triggering for some readers.

At the end of the first episode of Anatomy of a Scandal, Rupert Friend's character James is literally blown backwards by the force of his own shock after he is accused of rape.

While it's a shock to James and his wife Sophie (Sienna Miller), it's not a shock to those of us playing along at home who have watched this story play out many times before.

You see, it's no longer surprising to us that a man in a position of power (James is a prominent British MP) would use that power to take advantage of someone working under him.

That a man would casually rape a woman and wholeheartedly believe that he will get away with it.

Because it's happened so, so many times before.

That's what makes Anatomy of a Scandal such a compelling watch. It's both a 'dirty little thriller' that you'll rip through in an afternoon, and a study of a marriage which asks the question: can we truly ever know what the people we love are capable of?

Watch the trailer for Netflix's Anatomy of a Scandal. Post continues below.

Below I unpack what Anatomy of a Scandal is about and give my verdict on whether you should watch it:

What is Anatomy of a Scandal about?

Anatomy of a Scandal is based on Sarah Vaughan's bestselling book of the same name.

When news breaks that James has been having an affair with his much younger aide Olivia Lytton (Naomi Scott), Sophie vows to stand by him, allowing him "one little mistake".

But when Olivia accuses James of raping her after they had broken up, Sophie begins to question whether she really knows the man she's married to.

The case makes its way to court, where James faces prosecutor Kate Woodcraft (Michelle Dockery) who is determined to bring him to justice.

And as the court case continues, more and more secrets from James' past come to the surface.

The mystery at the centre of the series and the killer twist.

The stories of the women who are impacted by James' actions.

Unbelievable for the sexual assault storyline. And The Undoing for the study of a marriage.

There are six 45-minute episodes, so it's perfect for an Easter long weekend binge.

Anatomy of a Scandal is brilliantly made TV (David E. Kelley knows what he's doing) with just enough melodrama to keep you guessing.

It's also proof that book-to-TV adaptations work as long as you keep the mystery alive and the twists a-plenty (I'm looking at you Pieces of Her and Nine Perfect Strangers).

While some will come away from the series having merely enjoyed escaping into a 'dirty little thriller' for an afternoon, others will appreciate the questions the series poses about consent, privilege and the secrets we all carry.

Anatomy of a Scandal is streaming on Netflix from Friday, April 15.

Reply
Upvote
Definitely watch it. It's such a good drama with a kicker ending! If nothing else the acting of the main players, the wardrobes and the settings have everything going fort it. High class!
A
andra a month ago

Reply
Upvote
Like a lot of these thrillers the plot relies on a lot of coincidences that are more than unlikely, they are just preposterous.  The actors they find for the flashbacks are so unlike the characters now, yet we are expected to overlook this glaring inconsistency.  Try finding the address of some random friend you were at uni with 20 years ago in a city as big as London and see how far you get.  Sienna Millers character does it easily apparently even though the friend is now a complete nobody.  Little things like this really bug me.  The acting is quite good however if you overlook a lot of dodgy dialogue.  Do posh people really speak like that?
News
General
Opinion
True Crime
Politics
Sport
Explainer
Entertainment
Celebrity
Reality TV
Movies
TV
Books
Rogue
Royal
Lifestyle
Beauty
Fashion
Weddings
Home
Wellness
Health
Fitness
Travel
Food
Parents
Before The Bump
Pregnancy
Baby
Kids
Teens
School
Parent Opinion
Work & Money
Money
Finance
Career
Lady Startup
Relationships
Sex
Dating
Separation
Friendship
Family
Real Life
Couples