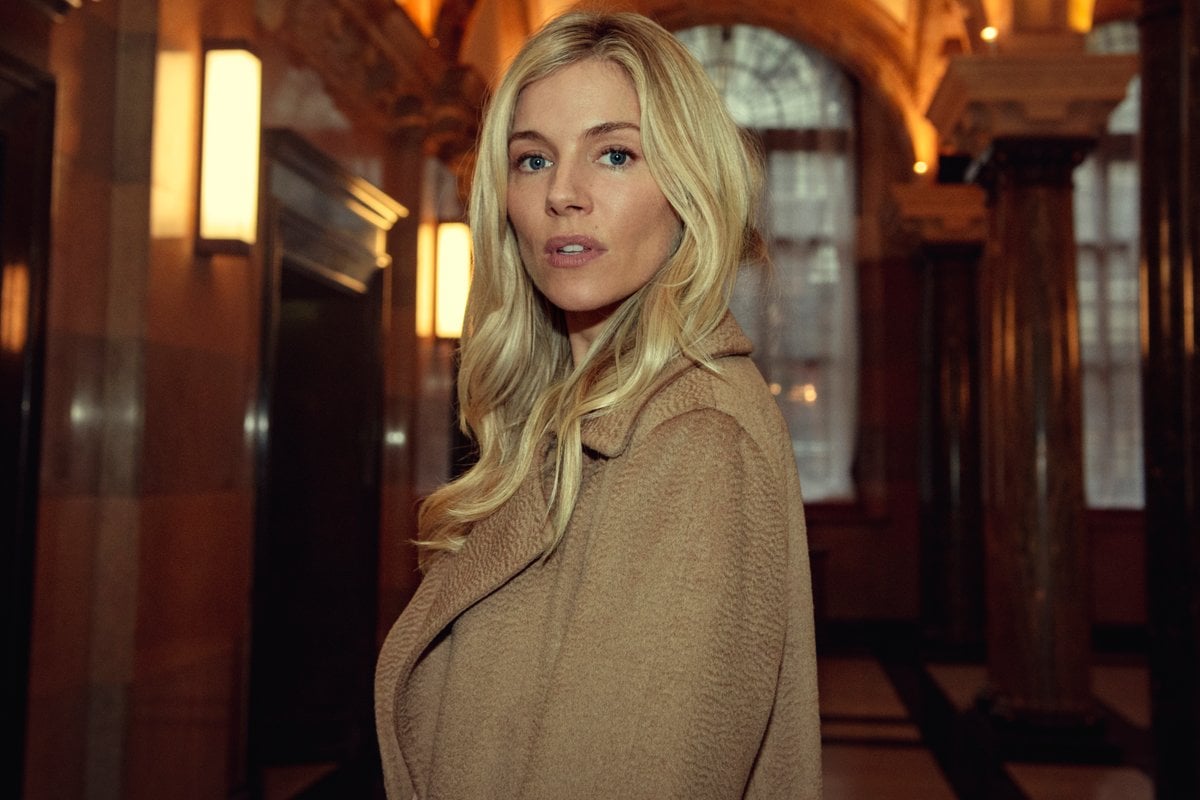 This post deals with sexual assault and could be triggering for some readers.

Netflix's Anatomy of a Scandal hits all the right notes when it comes to being a TV series that's easily consumed faster than a glass of red wine on a stormy night.

There's a gaggle of aesthetically pleasing actors all garbed in muted yet expensive looks (let's just say that if the Golden Globes were still a thing, Sienna Miller's coat collection would definitely be in with a chance) all weaving in and out of lavish homes as they grapple with a web of secrets.

Which all makes sense seeing as the series was developed and executive produced by David E. Kelley, the creative powerhouse behind shows such as Big Little Lies and The Undoing, which also happen to feature famous actresses in good coats devouring glasses of wine the size of well-fed kittens.

Anatomy of a Scandal, which was one of Netflix's top trending shows during its release week, begins when Sophie Whitehouse (Sienna Miller) is summoned home by her MP husband James Whitehouse (Rupert Friend) to be told he has been having an affair with his parliamentary researcher Olivia Lytton (Naomi Scott) and the story is about to be splashed across every news site.

The story quickly becomes more than a headline, however, when Olivia accuses James of rape and Kate Woodcroft (Michelle Dockery) steps in as the prosecution counsel tasked with James' case, all the while hiding her own secret history with the Whitehouse family.

Listen to this episode of The Watch, which discusses every plot twist in Anatomy of a Scandal. Post continues below.

On one hand, Anatomy of a Scandal is an easily digestible drama that hooks viewers in with the promise of the one thing we all like to see on TV - rich people's anguish. It's a series only interested in holding your attention for the six episodes allotted to easily fit into a weekend binge-watch, designed to be watched in an all-consuming clump so you don't look too closely at some of the loose story threads.

Yet, because of the show's use rape as the catalyst for the drama that unfolds on screen, the series, which is based on the novel of the same name by Sarah Vaughan, has no choice but to somehow add a voice to the ongoing discussion aerating the use of rape and sexual assault plotlines on TV.

In its early episodes, Anatomy of a Scandal manages to hit some right notes when it comes to the handling of rape and sexual assault storylines. Particularly in the trial scenes where we see Olivia take to the stand and recount her rape at the hands of James, all the while mindful that she must remain the 'perfect victim' at all times.

From an audience perspective, we are aware that Olivia must not appear vindictive or stray from her story in any way. Always walking a tenuous line between being truthful about her relationship with James while also having to prove beyond a shadow of a doubt that what took place in that elevator was not consensual, even if the relationship leading into it was.

Naomi Scott as Olivia Lytton in Anatomy of a Scandal. Image: Netflix.

There's also a striking moment where Kate Woodcroft angrily explains why Olivia's relationship could unfairly be the downfall of her case against him, noting that it only became illegal in Britain to rape your wife after 1992. Therefore, things still have a long way to go when it comes to convincing a jury that rape can still occur within the confines of a sexual relationship.

Where Anatomy of a Scandal falters, however, is in its depiction of rape on screen.

For decades, rape scenes have plagued TV storylines at every end of the entertainment spectrum, from low-budget soap operas to prestige drama series' and many high-stakes genre offerings.

Either by using the act of rape as a sensationalist grab to elicit a quick or shocking response from the audience, as a catalyst for a female character to have an obstacle to overcome, or, sometimes worst of all, in order to give a male character an arc hooked on vengeance and purpose.

In some cases, like with the 1981 General Hospital wedding of Luke Spencer (Anthony Geary) and Laura Webber (Genie Francis), their beloved on-screen "relationship" began with him raping her. But because it was shaped as a forbidden love storyline, their wedding went on to be one of the highest-rated soap opera episodes in history.

In more modern times, shows such as American Horror Story, The Sopranos, and even Private Practice have also turned to problematic rape scenes for shock value and a desperate reach for character development.

Game of Thrones, one of the biggest TV shows in the world during its eight season run, was always a repeat offender when it came to glorified scenes of rape and sexual abuse.

There was a scene where the character of Cersei Lannister (Lena Headey) was raped by her brother (and lover) Jamie (Nikolaj Coster-Waldau) next to their son's grave and a particularly violent rape scene involving Sansa Stark (Sophie Turner). An episode made even more problematic by the fact that this scene was focused on the pain of a male character forced to witness it, Theon Greyjoy (Alfie Allen), and not on the women being raped.

Michelle Dockery as Kate Woodcroft in Anatomy of a Scandal. Image: Netflix.

Rape and sexual assault soon became a plot point in every script circulating Hollywood, promoting executive producer Jeremy Slater to say in a piece with Variety, "It has become a plague on the industry."

Slater went on to say that when he was choosing writers for the TV revival of The Exorcist, it was the one plot point he encountered over and over again.

"One of my hard-and-fast rules when reading spec scripts was, the second that there was a rape that was used for shock value and that didn’t have any sort of narrative purpose, I threw the script aside," he said. "And I was shocked by the number that had that. I would say out of those 200 scripts, there were probably 30 or 40 of them that opened with a rape or had a pretty savage rape at some point."

In the past few years, a public pushback against the use of rape as voyeuristic plot device has led to a slew of new TV shows exploring rape and sexual assault in a more sensitive way, and following a new set of rules.

This time around only depicting rape scenes through the eyes of the victim, rather than the perpetrator.

Shows such as Unbelievable, Sex Education, Marvel’s Jessica Jones and I May Destroy You all became master classes in how to explore rape on screen. By sensitivitly unpacking the aftermath of the event, telling the story through the victim's eyes and in many cases making the perpetrator a non-descript vessel without a plot of his own.

Rather than an anti-hero whose feelings and motivations are examined at length.

But Anatomy of a Scandal chose to show two different scenes of rape on screen, but then allowed one of the victim's storylines to fade away into the background.

Once her court testimony is over, we never see how the outcome of the trial effects Olivia or where her storyline goes next. We don't even know anything about her outside her status as a rape victim.

We're treated to many different scenes of her being raped in an elevator throughout the show, from many angles and through the eyes of the rapist himself at multiple points, but once her story no longer serves for shock value, she is relegated to a fate off camera.

The new rules of TV have taught us that rape is no longer a device that can be wheeled in and out of shows when moments of shock and tension are needed. They can no longer be the default option for women to be linked to the central plotline.

In this instance, Anatomy of a Scandal took a big swing, but it missed the mark by showing a series of scenes it had not taken the time to earn.

B
bowerbird 3 months ago

Reply
Upvote
1 upvotes
I disagree. I don’t think the series over sensationalized the rape scenes and I can’t stomach those that do.
Most scenes were shown in the courtroom as memories or recounts.
If anything, it gave further voice to the truth of the events (particularly by including the college incident), without which the audience would have been in the same position as the jury. Deliberating a he said she said version of events.
Maybe they could have revisited the staff member as a character, but it was not really about her. It was about the misuse of privilege and power, and the lawyer who used hers for good.
To compare the use of rape as breaking the ‘new rule’ as if it did it in the same way as Game of Thrones (for example) is drawing a very long bow!
Resources
Very Peri
Skin
News
General
Opinion
True Crime
Politics
Sport
Explainer
Entertainment
Celebrity
Reality TV
Movies
TV
Books
Rogue
Royal
Lifestyle
Beauty
Fashion
Weddings
Home
Wellness
Health
Fitness
Travel
Food
Family
Before The Bump
Pregnancy
Baby
Kids
Teens
School
Parent Opinion
Work & Money
Money
Finance
Career
Lady Startup