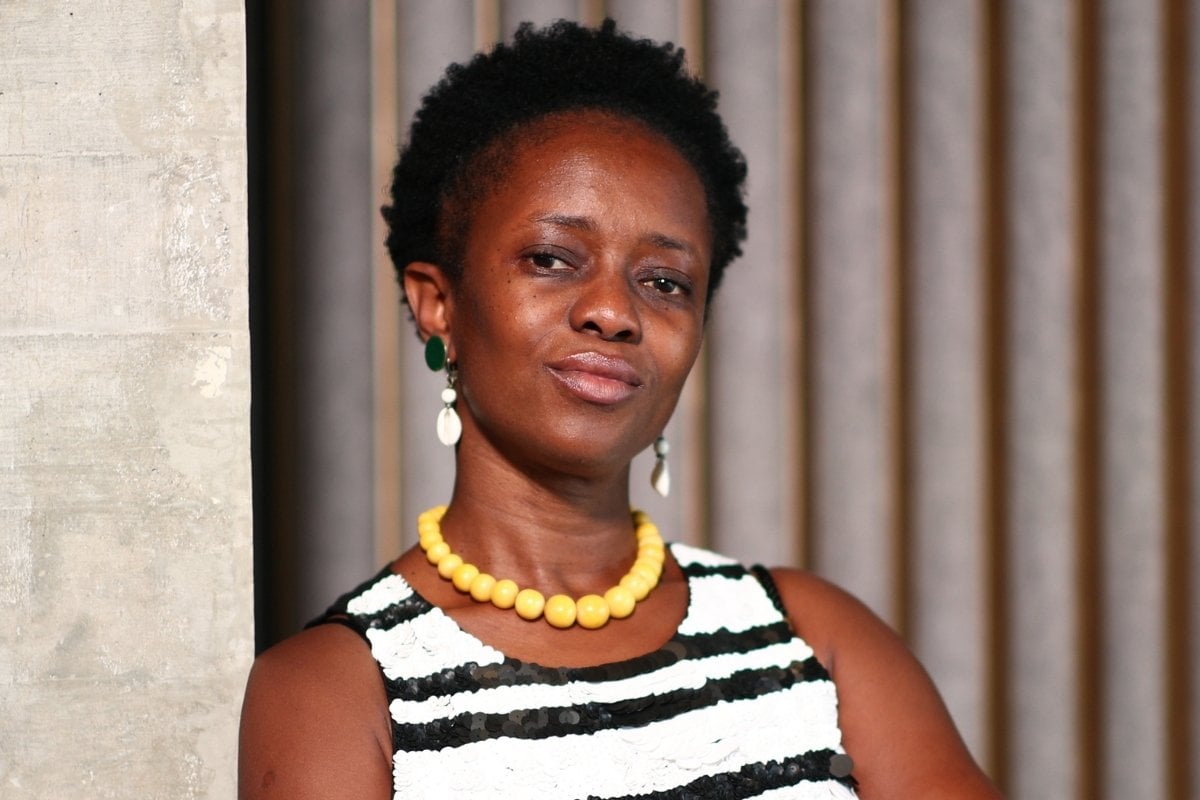 Warning: This post deals with sexual assault, which may be triggering for some readers.

It was in the early hours of a Wednesday, when Aminata Conteh-Biger was woken by a loud, rumbling boom.

The then-18-year-old looked out the tinted, bullet-proof windows of her father's Freetown home to see people scrambling through the dark streets, away from fire-bombed buildings. Some were screaming, some bloodied. Some were wrestling against flames that wrapped around their bodies.

It was January 6, 1999, and Revolutionary United Front rebels had laid siege to the Sierra Leone capital in a savage nighttime offensive.

After waging eight years of bloody civil war across the country, the fighters sprung up inside the city, attempting to seize it from government troops and the West African peacekeeping force, ECOMOG.

Though their ultimate target was politicians and government officials, the rebels laid waste to the civilian population along the way; burning homes, cutting off people's hands, shooting and assaulting them with indiscriminate brutality. An estimated 5000 were killed, pushing the war's toll beyond 50,000. 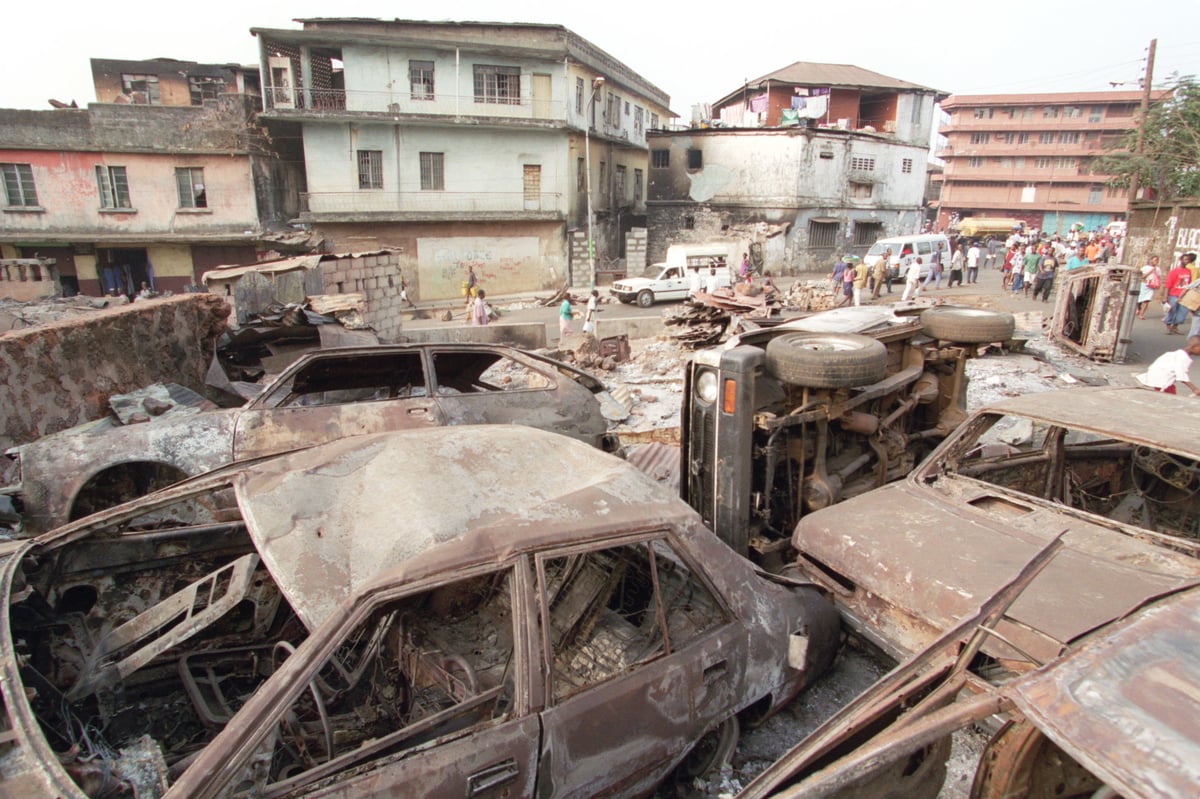 The streets of Freetown in the wake of the January 1999 rebel offensive. Image: Getty.

By the time the rebels came across Aminata's four-story, bright-yellow home — the largest in the area — weeks later, there were hundreds of local people hiding there. Her father had welcomed them in, fed them, sheltered them.

That afternoon, as the rebels crowed threats about burning the home to the ground, the occupants emerged together. Aminata clutched her Parkinson's Disease-affected father's hand, trying her best to hide his shaking.

A rebel fighter named Daramy strode toward her and called her over. She knew what was coming. She'd heard the stories of women being taken, or assaulted in front of their loved ones. Fearing for her life, her father's and her siblings', she obeyed.

"I had to let go of my dad's hand, walk towards him, and not look back," Aminata told Mamamia's No Filter podcast. "I did that deliberately, not to see my dad's reaction."

Like thousands of other Sierra Leonean women and children, Aminata was snatched by retreating RUF forces, marched into the surrounding hills and held in servitude.

She was Darymy's prize. Her virginity was taken in a gang rape by him and at least five men, and the assaults continued for weeks and months. He developed a sick obsession with her, to the point that he stopped going away to fight — "which was my hell; he had more time," she said.

At one point, she became pregnant, and after several dangerous attempts to secretly terminate the pregnancy — including ingesting a battery — she experienced a miscarriage.

Listen: Aminata shares her story of survival. (Post continues below.)

After three months in that hell, Aminata's freedom came from an unlikely source. A particularly vicious rebel commander known as Coal Boot.

Though he'd taken her from Darymy like property and sexually assaulted her with his gun, the next day he released her along with a group of children. She never learned why.

After being handed to the government, Aminata and the children were taken to back to their respective homes. Her father was waiting, a changed, broken person.

"I remember walking to the gate and he was sitting waiting for us. It was just not the same chubby cheeky smile man."

Aminata's unexpected return attracted attention in Freetown, and with a furious Darymy hunting her, she was forced to flee to neighbouring Guinea. There, she stayed with her mother, who'd separated from Aminata's father when Aminata was a toddler, and was referred to the United Nations High Commissioner for Refugees.

She and her sister were ultimately resettled in Australia in 2000.

Though her new home came with challenges of its own — racism, welfare poverty — she also found love, and a platform. She wrote a book about her experience called Rising Heart, advocates for survivors of sexual violence and is working to help end preventable maternal and infant deaths in her country of birth.

Roughly one in 17 women die during childbirth in Sierra Leone, compared to one in 8,700 in Australia.

It's a cause particularly meaningful to Aminata, as she experienced life-threatening complications while delivering her eldest daughter — even in the relative safety of an Australian hospital. Inspired by the messages of compassion and justice her father instilled in her as a girl, she launched the Aminata Maternal Foundation.

"No mother or child should die due to poverty. That is something that we can control. We cannot control war... we cannot control sickness, but bringing a life — we have the ability to make everybody have a joyful experience."

If you have been impacted by sexual assault and need to speak to someone, please call 1800 RESPECT (1800 737 732). It doesn’t matter where you live, they will take your call and, if need be, refer you to a service closer to home.

Reply
Upvote
3 upvotes
What an incredible story, I am amazed and in tears thinking about the strength of this woman. I will definitely be donating to this wonderful cause.
I would LOVE more these sorts of stories (and less about the royals)
cat a month ago