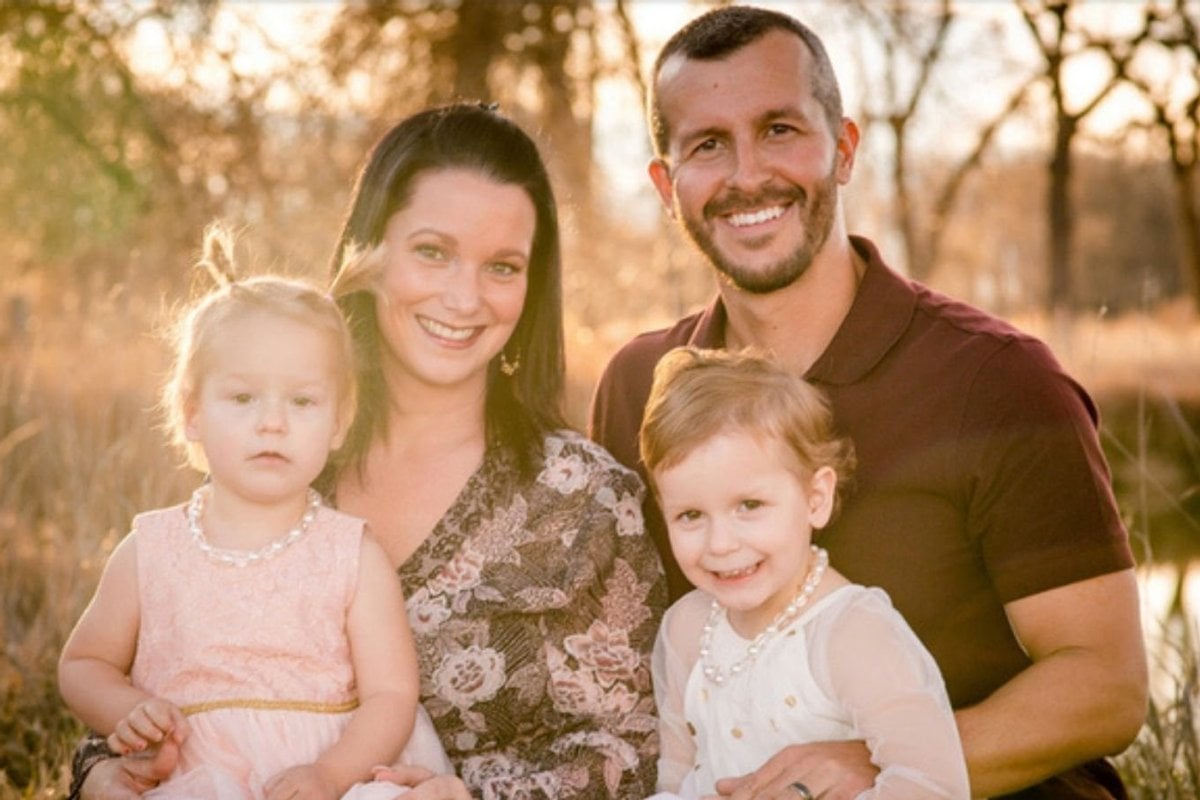 This post deals with graphic descriptions of violence and will not be suitable for all readers.

In the opening minutes, a detective, or a reporter, or a family member of the victim, speaks straight to the camera.

They talk about the case with a level of detachment and reflection that only comes from time and distance.

They've had time to grieve and process what happened to their loved one. The detective has gone over the facts time and time again. The reporter knows the story like the back of their hand.

WATCH: The trailer for Netflix's American Murder: The Family Next Door. Post continues below...

The unimaginable crime happened five, 10, 30 years ago and they've had time to distance themselves from the fresh horror of it all.

It uses police bodycam footage, recordings from the interview room, and snippets from Facebook to plunge us straight into the middle of the Watts family murders.

The documentary begins with the police arriving at the home of Chris and Shanann Watts and their two young daughters, Celeste and Bella, in Frederick, Colorado, on the morning of August 13, 2018.

Nickole Atkinson, a friend of Shanann, had called the police as she hadn't heard from her and she was concerned for her welfare.

Through bodycam footage, we see the police and Nickole and her partner peering through the windows of the house, looking for any signs of distress.

They're just about to open the garage when Chris arrives home. He jogs into the garage and opens the front door.

While the police and the friends search the house, Chris casually answers their questions.

He says the girls' blankies are gone, and they'd never sleep without them. He seems as confused as Nickole when they discover Shanann's phone sitting on the bannister at the top of the stairs.

He doesn't understand where his wife, who was 15 weeks pregnant, and their two daughters, who were just four and three at the time, could have gone.

Later, we see Chris sitting in an interview room. He chats casually with FBI agent Graham Coder and suggests that someone must have taken Shanann and it must have been someone she knows.

"If someone took her, it would have to be someone she knew," he says, "because there's no sign of anything, like, being disturbed or broken."

After he fails a lie detector test, he continues to deny knowing anything about the whereabouts of his small family.

Even when the investigators reveal the fact they know he has been having an affair with his colleague Nichol Kessinger for two months, and he was planning to leave his wife, Chris plays dumb.

Later, when his dad comes into the room, Chris changes his story. He tells his dad he killed Shanann after she killed the two girls.

When Agent Coder asks him whether he's comfortable with the world knowing Shanann killed their two daughters, he replies that he is.

LISTEN: The First Time He Hit Her: The Murder Of Tara Costigan. Post continues below...

Of course, the truth soon emerged when the bodies of Shanann, Bella and Celeste were recovered from an oil field owned by the petroleum company that Chris worked for.

His wife and his unborn son had been buried in a shallow grave, and his daughters submerged in crude oil vats.

Chris later confessed to the murders and is currently serving three consecutive life sentences without a chance of parole.

It's been just over two years since Chris Watts murdered his wife and two young daughters in cold blood.

The grief and pain is still raw and ever-present for Shanann's family. The community of Frederick, Colorado, is still wondering how something like this could have happened in their backyard. The detectives in the case are still piecing together what happened from Chris's ever-evolving version of events.

There's no distance in this story and that's what makes it uncomfortable to watch.

And hopefully, one day, there will be no need for a documentary like American Murder: The Family Next Door.

Reply
Upvote
3 upvotes
"But we need to watch it and we need to sit with our discomfort. We need to be angry. We need to talk about these horrific crimes and we need to share the stories of women like Shanann and children like Bella and Celeste. We need to know that men like Chris Watts exist. "
Really? You honestly think these shows exist to inform and educate us about the fact that there are men out there who devalue the existence of others in such a hideous way? Do you honestly think people would be otherwise unaware of that, were it not for these documentaries? In a world wherein little girls already grow up knowing from an early age that their gender makes them prey, I don't think we need more programs out there to really cement that message, do you? I'd say we're already painfully aware that men like Chris Watts exist.
News
General
Opinion
True Crime
Politics
Sport
Explainer
Entertainment
Celebrity
Reality TV
Movies
TV
Books
Rogue
Royal
Lifestyle
Beauty
Fashion
Weddings
Home
Wellness
Health
Fitness
Travel
Food
Parents
Before The Bump
Pregnancy
Baby
Kids
Teens
School
Parent Opinion
Work & Money
Money
Finance
Career
Lady Startup
Relationships
Sex
Dating
Separation
Friendship
Family
Real Life
Couples