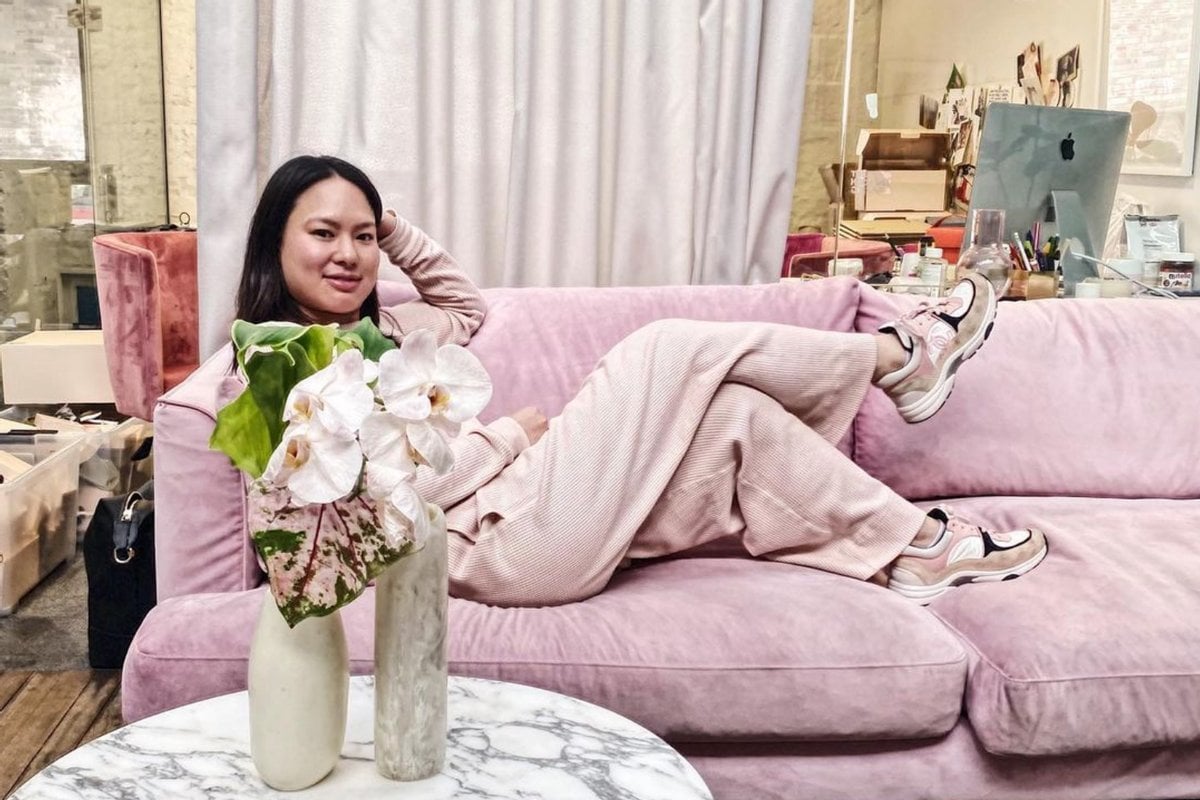 Alyce Tran knows how to build a successful brand. Just don't ask her how she does it.

The Sydney-based entrepreneur co-founded the famed accessories label The Daily Edited (you'd have to be hiding under a rock not to know those chic monogrammed pouches and phone cases), and is now the co-founder of modern homewares brand In The Roundhouse.

But before she stumbled into global success (more on that later), Alyce followed the "typical path".

She went to uni, studied law and became a corporate lawyer.

Speaking to Mamamia, Alyce - who recently applied her creative talents to a Christmas card collaboration with VistaPrint - shared the important lessons she's learnt going from a lawyer to the force behind two cult brands.

Here's what she told us.

1. Grow your side hustle before making it full-time.

After Alyce completed her law degree at the University of Adelaide, she landed a job at a Perth law firm before relocating to Sydney. It was there she met her soon-to-be The Daily Edited (TDE) co-founder, Tania Liu.

It was during a chat with her that Alyce realised law wasn't her end goal.

"One night, [Tania] actually asked me whether or not I wanted to be a lawyer forever. And I was kind of like, 'I don't know, probably not'," Alyce told Mamamia.

"I didn't see the full legal career track as something that I really wanted to do. But I didn't really know what other options there were for me at that point in time, because as a young person, you studied law and you're now at a law firm. So what else is there?"

"So, we started The Daily Edited together, and initially, it was just something that was a hobby, and we never thought it would really go anywhere," she said.

Alyce and Tania originally launched The Daily Edited as a fashion brand in 2011.

It was a blog where the women would showcase a daily edit of clothes that you could buy and wear from work to drinks. But the idea didn't exactly take off.

In 2014, they tested a different type of product: three leather goods - a pouch, a cardholder and an A4 document holder - offering a little something extra; an element of personalisation.

"That was the thing that really changed the business and grew it into something that was quite substantial, and it was only then the business [had] turnover," Alyce said.

"At that point, we [left] our careers as lawyers."

2. How not to manage people.

Before becoming her own boss, Alyce worked under one. It taught her exactly how not to manage employees.

"There was an expectation of long hours and a culture where, to me, asking anyone anything was quite scary," Alyce said.

"I always felt very unsure of myself and I was always very panicked, and so I never wanted to give that same feeling to anyone working for me.

"I definitely learnt how not to treat people through that experience."

3. Work and personal life don't have to be separate.

If you ask an entrepreneur whether they have work-life balance, chances are the answer will be no. And it makes total sense - running your own business leaves little time for play.

But for Alyce, her work and personal life blend together - and she likes it that way.

"I'm very lucky that my sister [Caroline Tran] is in a similar industry - she's the creative director of womenswear at [lifestyle fashion brand] Venroy, and she used to work in magazines," Alyce explained.

"When we're together our whole conversation is work-related, but we really enjoy our work. It's not like there's a definitive line [with work and personal life].

"I understand that other people have jobs where they clock in and clock out. But that's not the case with anything that I do, because I like the work that I do.

"And people find it interesting, so I'm happy to talk about it socially," she said.

4. Sometimes a successful product idea comes down to luck.

While it's safe to assume Alyce has a knack for spotting trends before they’re popular - think personalisation with TDE and desirable homewares with In The Roundhouse - she says the It-factor of both businesses came down to pure luck.

"I actually got my first personalised handbag for my 16th birthday. I really liked it and I didn't think that was going to be a trend."

"Same with homewares. It was the idea of my co-founder, Brooke, who is a school friend... [and] that business blew up because of COVID, [with] everyone caring about tablescaping, how you plate your food and stuff."

Still, we have a feeling there's a little more to it.

With so many women starting their own side hustles, everyone wants to know the formula for a successful product. We asked Alyce what she thinks it comes down to (TDE's most popular item was a phone case.)

"I never thought that phone case would go so well, and that would be a key product," Alyce said.

"I was like, I don't know if people want to hold their names in their hands, maybe they just want it on their handbags they can put down. You're always holding your phone, [so] why you do you need [initials] when you're holding it?"

"So I never thought that it would go that well," she said. "But it's just trial and error."

And that leads to Alyce's best advice for anyone thinking about launching their own business or product.

"Don't stew on your idea. Just get it out there and get feedback."