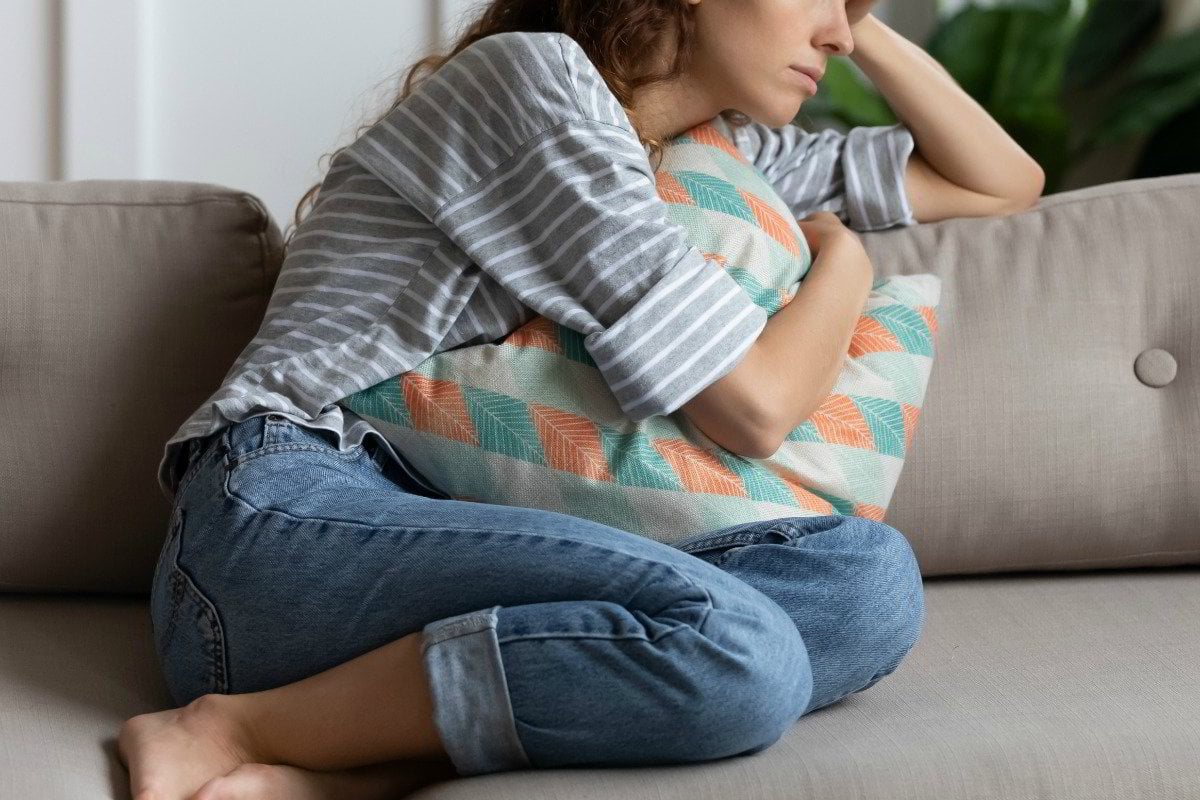 Elle is known to Mamamia but has chosen to remain anonymous for privacy reasons. The feature image used istock photo.

Elle thought she was doing the responsible thing by taking the emergency contraceptive pill after having unprotected sex.

She remembers being quite surprised that the simple silver packet the pharmacist handed her didn't come with a leaflet with information about side effects and what to expect, like you get for the daily contraceptive pill.

But she shrugged, swallowed the pill, and got on with her day.

At 4am the following morning, she woke up feeling faint. She staggered to the bathroom and vomited everywhere.

SIDENOTE: The best position to sleep in when you're on your period. Post continues after video.

She eventually went back to bed, but when she woke up again and looked in the mirror her face was swollen.

"I took a couple of days off work to recover and then the next month rolls around and I get my period and I wake up again at 4am and exactly the same thing happens," Elle told Mamamia.

Except this time the symptoms were worse, and they kept on getting worse every period.

She started getting red blotches on her face. Some months they'd extend to her shoulders, and fingers. Her body would prickle with hot, uncomfortable irritation.

"I looked like someone who was allergic to bee stings. My lips and tongue were enormous. I couldn't really see my face it was so swollen," she explained.

The symptoms would follow the trajectory of her period. The red blotches would spike on day one, start to pop and blister on days two and three, and reach her eyes on day four, making her look like she had conjunctivitis. Then, by the end of the week, she would start to heal.

It was so debilitating Elle had to take a week off work every single month. 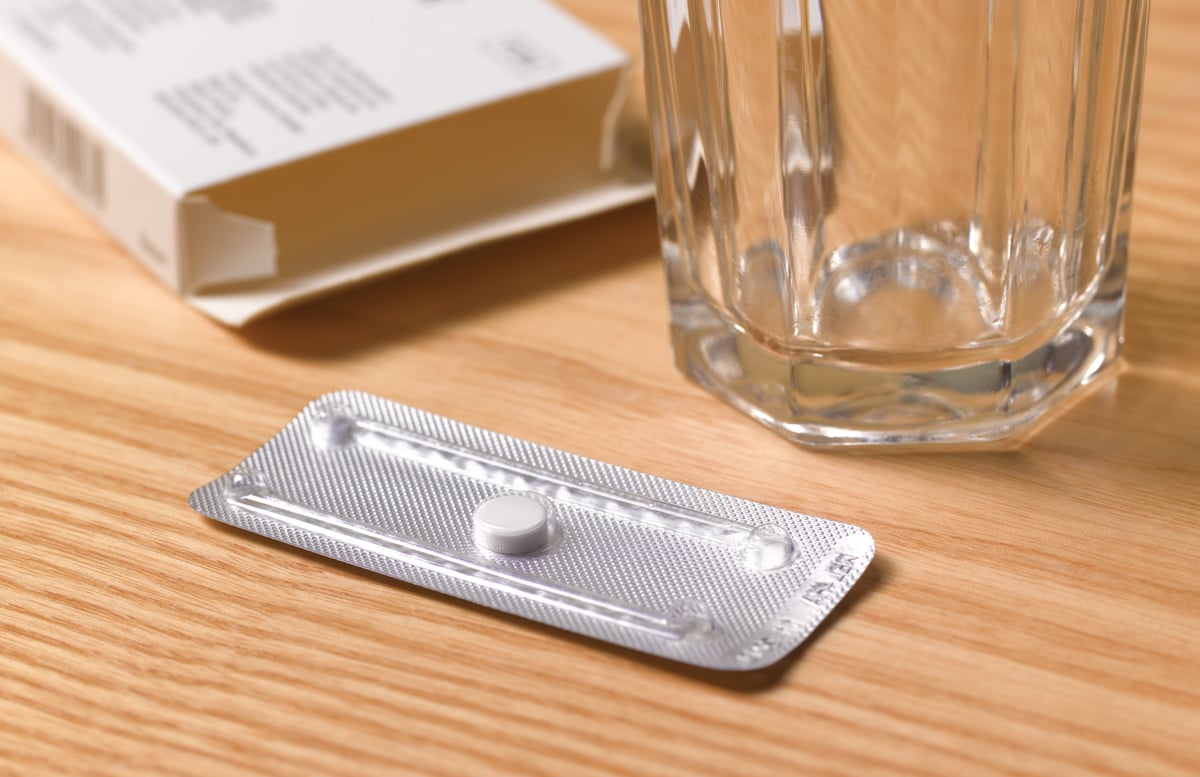 Elle is angry that her emergency contraceptive pill didn't even include a leaflet warning of possible side effects. Image: Getty.

Elle has always had issues with hormonal contraception.

She tried the Implanon rod first and bled non-stop for months, so quickly looked for another option.

When she tried the daily contraceptive pill instead, she ended up in emergency throwing up and spasming. Not just once - multiple times. Doctors thought she might have gallstones or food poisoning, but when she stopped taking the pill, the symptoms didn't return.

It'd been close to five years since she'd had any hormonal contraception in her body when she took the emergency contraceptive pill in 2019, and 12 months on her doctors still consider her a "mystery."

Despite being able to pinpoint that the symptoms started right after she ingested the morning-after pill, they couldn't tell her why.

Thankfully, an auto immune medication given to her by her GP has stopped the symptoms for now, but it's only a short-term solution. She's been told she can't stay on that medication forever as it can lead to osteoporosis if used too often, for too long.

"After all this started, I was so blown away that taking the contraceptive pill could possibly cause something like this. I knew it could cause all sorts of things, but I was shocked about this," she said.

Elle was told she might have autoimmune progesterone dermatitis - a condition in which the menstrual cycle is associated with a recurrent skin rash. But she was also told the condition was "very rare" and is yet to receive a definitive diagnosis.

"It's very vague, because there hasn't been a lot of research. So everything points to a hormonal disorder triggered by the contraceptive pill. The results all show that, but there's just been so little research they can't confirm it," she explained.

"I've seen 10 specialists in 12 months - allergists, dermatologists, immunologists, gynaecologists - and they still can't tell me if it's an autoimmune disease or an allergy or why I have it."

As Dr Kenneth Wong, a Dermatology Registrar, wrote in 2008: "The cause of autoimmune progesterone dermatitis is not entirely understood. Some patients have had previous exposure to external progesterone in the form of oral contraceptive pills. This is thought to pre-sensitise patients to react against their internal progesterone."

Mamamia spoke to three different skin experts, who all confirmed that the condition Elle's experts think she might have is very rare.

"It's extremely rare and has only a few cases reported and it is quite hard to prove," Associate Professor Greg Goodman, founder of Script Skincare told Mamamia. "Even the skin test is not entirely accurate and there are challenges in performing it. There is no really specific histological or other laboratory test to prove the diagnosis."

"It is exceedingly rare with only 50 reported cases in medical literature, but was first identified in 1921," added Dr Giulia D'Anna.

In between appointments, Elle has been doing some of her own research and has found Facebook groups full of hundreds of women describing the same symptoms as her, desperately seeking answers.

Skin Practitioner Sarah Hudson tells Mamamia that the condition occurs three to ten days prior to the menstrual period, and generally resolves two days after your period.

"[It is a] skin rash with red, raised, itchy bumps or maybe even present as eczema," she said.

Of the women Elle has spoken to and read up on, some started experiencing it from the moment they began menstruating, while others developed it after taking the pill. Most would get it in the week before their period started, others like her, would start breaking out in rashes and blotches and swelling on the first day of menstruation.

"I've read reports about women being allergic to their periods around the world... They are either treated with the  contraceptive pill, immune-suppressants, a hysterectomy (removal of the uterus) or an oophorectomy (removal of the ovaries), which is an extremely harsh solution that's not even addressing the problem," said Elle.

As Dr D'Anna explained to Mamamia, treatment for a condition like this is limited.

"Antihistamines that are usually used in most “allergy” type reactions do not really have much impact, so treatment is limited to suppress progesterone with oral contraceptives," she said.

"If women have symptoms from contraceptive use we say, 'It didn't work for me.' But there are so many women like me. It isn't our body or our fault," Elle told Mamamia.

"The contraceptive pill came out as such an empowering thing for women to have the option to choose if they wanted to get pregnant or not. But then there's that flip-side where it's our burden and we bear the brunt of contraceptive responsibility and the side effects of medications like the pill. Debilitating side effects aren't normal and shouldn't be deemed acceptable by medical standards," she added.

Elle is telling her story because she wants more answers.

Assoc. Prof Goodman think its "rarity is against its research," which is why not much time and effort has been put towards it.

"Hopefully some people working in the medical profession can just care enough about all of the women out there living like this, to do more research into it," Elle told Mamamia.

"Everybody's story is the same and there are thousands of women who are desperate for answers."

Elle is collecting the stories of women like her. If that's you, please drop her an email at [email protected].