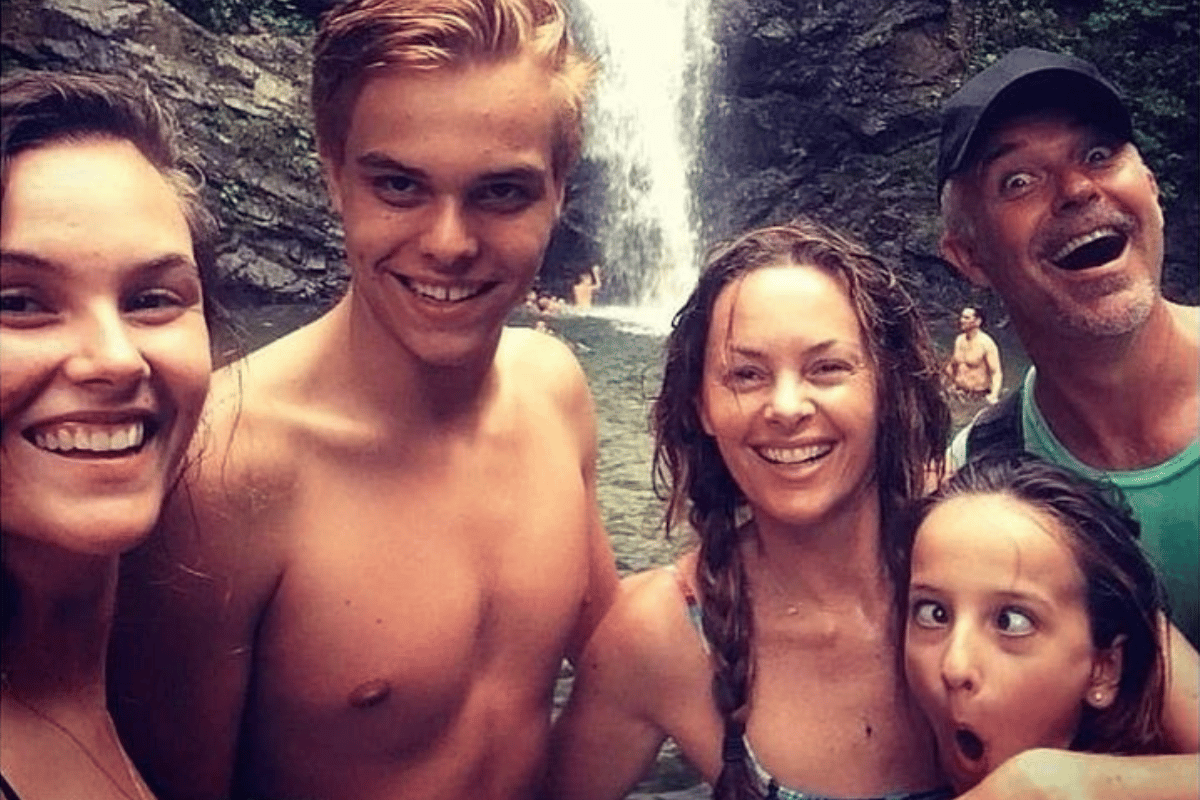 For many years, author Alison Daddo's life revolved around her kids. But as her three children with actor husband Cameron Daddo - Lotus, River and Bodhi - became adults, everything changed.

"My favourite job [as a mum] was no longer a job - I was made redundant," the former supermodel tells Mia Freedman on Mamamia's No Filter.

"I still really find it hard. I loved my years of being with the kids when they were younger and I loved being a stay at home mum. So I'm still working through this phase, but I'm also feeling so much more energy and like I have a second lease on life, because I'm through the other side."

Watch: Alison and Cameron talk about their relationship on Studio 10. Post continues below.

While initially she felt as if she never wanted her kids to leave home, Alison says she enjoys the freedom of a little more space.

"For a long time, it felt like I was going to be mourning for the rest of my life," she recalls.

"When the kids would go out on a Friday or Saturday night, I would feel so sad they weren't at home having dinner with me, but now I'm actually excited. So I'm feeling this shift, which is really good."

Before Alison made this emotional shift, she had to work through a range of emotions that came with 'letting go' of her teenagers, which she admits was sometimes 'heartbreaking'.

"River was very much a mama's boy for a long time. When Bodhi was born six years after River, I would attempt to still make time for him, but he was at school and he soon became his own little fellow. I remember that shift of independence, even then.

"He kept a lot of things to himself unless he was cooking in the kitchen... then little bits of information would dribble out. But I remember those moments of feeling that he was stepping even further away from me until there was no news coming at all and the physical affection was gone. I would go to hug him, and his body would stiffen and recoil.

"But he's 22 now, and he tells me things again. He's much more appreciative of our relationship now."

Alison realised exactly how much River appreciated her when, during a speech for her 50th birthday, he referenced the time he came out as gay and her beautiful, loving response.

Listen to Mia Freedman interview Alison Daddo on No Filter. Post continues below.

"When River came out, he apologised for it, which tells you a lot about the culture we still live in. I told him at the time that was the last time I ever wanted him to apologise for who he was.

"At my 50th, he wept when he got up and spoke in front of the room full of family and friends about what that meant to him. I had no idea and it just shows that you don't always know how impactful your words are to someone.

"If your child comes to you and tells you they're gay, then just wrap them up, wrap them up with love, and just ask them, 'What do you need? Is there anything you need to talk about?' Tell them you love them and that they can be whoever they want to be."

The only concern Alison says she had for River initially was for his safety, and her instinct was to protect him.

"Suddenly I thought, 'Is he going to be safe?' My mama bear came out because it was my instinct to want to keep him safe."

Parenting her two girls through the teen years presented a similar set of challenges for Alison. She tells Mia how she struggled with wanting to protect them from being stared at and catcalled in the street.

"I felt immediately protective. Particularly when I saw 50-year-old men leering at my 16-year-old. I just wanted to wrap her in a blanket and put her under my arm.

"I wasn't quite ready for it. They're both gorgeous young women. But as a young girl, I think it's hard to prepare yourself for that kind of catcalling."

The 52-year-old author of Queen Menopause says that ageing has been tough, but that saying goodbye to her fertility came with even greater feelings of grief.

"I had a lot of tears about that. When talking to Cam about it, he was so confused because he knew we weren't having any more children. But I just didn't want that choice taken from me. I was like, 'Who says you can take it?' Like, what if I really do want kids at 55? It felt really cruel that the choice was taken from me."

As she researched more about perimenopause and menopause for her book, Alison wanted to find out more about this stage of life and what she needed to do to get through it.

"My focus has been on Cam and the kids, so once fertility gets taken from you, it's like, 'What's left?' And what's left is me. I nurtured the kids and they really no longer need me in that way, so now it's my turn!

"I'm really taking good physical care of myself for the first time. I'm eating better and just coming home and going to read my book in my room for a bit with a cup of tea and closing the door with my kids in the house.

"I couldn't have done that before because I would have been making dinner or been out there chatting and making sure they got everything.

"Now it's like me removing myself from them, not them remove themselves from me, and it's freeing. It's a good thing."

Queen Menopause: Finding your Majesty in the Mayhem by Ali Daddo is published by Allen & Unwin and is available now.

Listen to the bonus episode of No Filter where Ali Daddo shares an extract from her new book. Exclusive to Mamamia subscribers, listen here.

Reply
Upvote
1 upvotes
This article hits particularly close and Alison puts perfectly into words what I'm currently experiencing. I've been a mum for over 23 years to five amazing kids. My last two are about to turn 11 years old and my daughter especially is starting to need less time with mum. Logically, I know that it's part of them becoming their own people, finding out who they are, but it's hard and it's heartbreaking at times. Mum is all I know how and who to be. I am in that "feeling like I'm going to be mourning the loss of their littleness forever" phase and it's going to be a bit of a dig to remember just who I am again, without little hands and bodies attached to me wherever I go.
News
General
Opinion
True Crime
Politics
Sport
Explainer
Entertainment
Celebrity
Reality TV
Movies
TV
Books
Rogue
Royal
Lifestyle
Beauty
Fashion
Weddings
Home
Wellness
Health
Fitness
Travel
Food
Family
Before The Bump
Pregnancy
Baby
Kids
Teens
School
Parent Opinion
Work & Money
Money
Finance
Career
Lady Startup
Relationships
Sex
Dating
Separation
Friendship
Family
Real Life
Couples