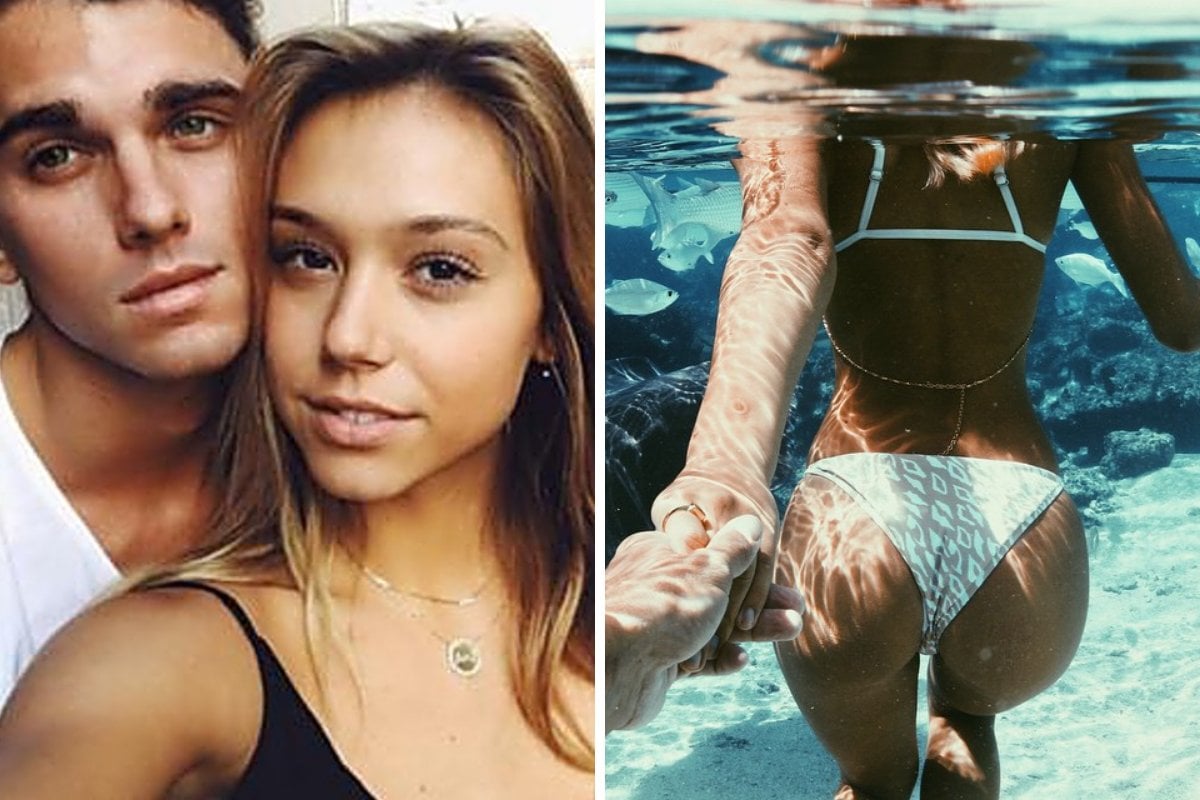 "You were the first face of Instagram," Alex Cooper said.

And while Alexis Ren said a deflecting 'wow' in response, she knows that it's true. With 14.8 million people following her every post, Alexis grabbed the attention of this audience nine years ago, and she's held its gaze ever since.

While you may not instantly recognise her name, chances are that you've seen an Instagram picture of Alexis, or a YouTube video of her romantically running away from the camera during a vlog filmed on a pristine beach. And there's a really big chance that you have seen a photo of her with her ex-boyfriend and thought, 'I want that'.

That's because Alexis was one half of the first Instagram famous couple. She travelled the world with her partner, Jay Alvarrez, and the world became fascinated with the pair.

Even after their breakup in 2017, everything remained picture perfect about the couple, with just an archive of photographs and #relationshipsgoals sprinkled across the internet.

But this week, Alexis Ren decided to take people behind the filtered fairytale she and her ex established, to share what their relationship was really like. And she did it all on an episode of the Call Her Daddy podcast, with host Alex Cooper.

Here is Alexis' side of the story.

...Or maybe this should be titled, When Jay DMed Alexis.

Alexis and Jay's Instagram-famous relationship started at the source of their fame: on Instagram.

"He DMed me and was like: 'Come to Hawaii,'" Alexis shared.

While this sounds like the opening plot of a true crime investigation, Alexis wasn't afraid, or cautious, or concerned. Instead, she hopped on a plane to Hawaii with her big sister.

When Alex asked Alexis what initially attracted her to Jay, she had an instant response: "The lifestyle."

"He seemed very connected to nature. And his mum had died from cancer too, so we connected over that and I thought, 'He gets me,'" she said.

But in hindsight, Alexis admitted that she saw the red flags from the very beginning. 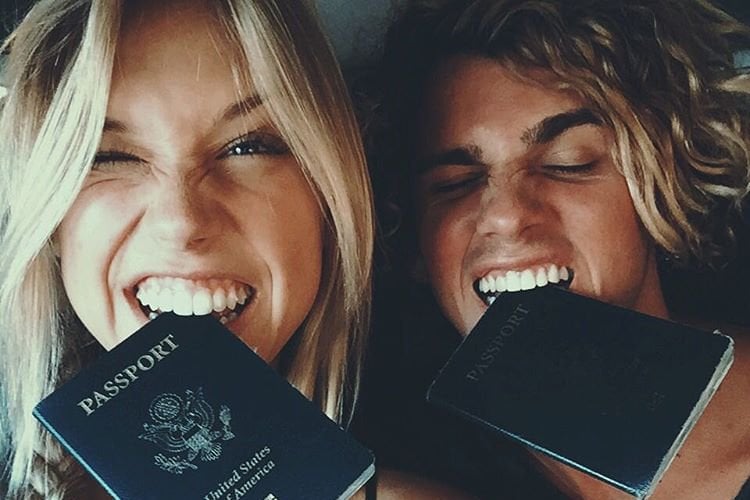 "Every morning I would get up so much earlier than him to put on my makeup, and I don't know if he knew that I was doing that, but I felt the need to always look perfect."

And that pressure of perfection would remain a constant in their very public relationship.

"I do. It was when my ex posted the first lifestyle video that we did," Alexis replied.

"I didn't really know what he was doing with the camera. We were just screwing around, but then we woke up the next morning to every single news channel talking about it."

And they didn't stop. Alexis and Jay's videos became a point of fascination. An intimate look into a very aesthetically pleasing relationship that everyone wanted to mimic.

Here's one you can watch right here. Post continues after video.

"People didn't know what to do about it," Alexis recalled, reflecting on the popularity of the videos. And she didn't know how to process it all either. "At the time, people were like, 'Why are people asking for your picture? Why are people chasing you down at Athens airport?' And I was like, 'I don't know!'"

"I didn't think that it was me that was the famous thing, it was the relationship that was. And so I had to make sure that I was the best girlfriend. I had to be the perfect girl for him. Because no one will like me if I don't, and he won't like me if I don't."

In hindsight, Alex admitted that their relationship "was set up to fail".

"People would literally call me 'the perfect girl'. How was I ever meant to maintain that?"

Nowadays, whenever a couple of influence start over-sharing the intricacies of their relationship online, audiences are quick to judge the reality of it all.

Is this put on for the cameras? How much of this is fake?

But when Alexis and Jay pioneered this trend, viewers soaked it up. They felt privileged to be seeing this very real relationship playing out on screen.

"The relationship was amazing... at first. I genuinely do think that he loved me, and it was real for a little bit. But then when the 'business' of our relationship became bigger than the connection itself, that's when it started to deteriorate."

And then Alexis and Jay hit a domestic hurdle that most couples do: money. Except their arguments weren't about electricity bills and spending too much on takeaway. They were about how big of a slice of the pie they deserved.

"His belief was very much that there was not enough [money] for everyone, so he had to fight for his place, his money. There was a constant 'scarcity' feeling."

While Alexis sympathised with Jay's stance, adding, "In their mind, they're not the bad guy. They're trying to survive", she noted that blending business and romance in this way is a recipe for disaster.

"When money and power become the main purpose, then the connection becomes collateral damage." 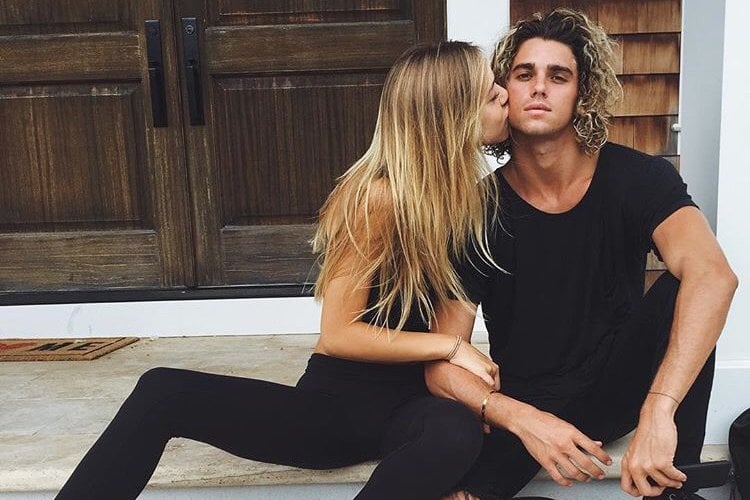 Towards the end of their relationship, even Alexis' support network could see they were hanging on for the wrong reasons. In fact, it got to the point where Alexis' friends were telling her that Jay was just staying with her to make money.

"There was such a sense of, 'I need her to be in this relationship to maintain the business', and that to me was terrifying - because I didn't look at our relationship like a business."

When it came to the breakup, Alexis recalled being pushed emotionally to the edge by Jay. He was nudging her towards a meltdown, so when during an argument she finally sobbed the words, 'I'm done', he accepted it as a victory.

"I was screaming, 'I can't do this! I'm done!' and there was just no emotion in his face." It was at this point she could no longer recognise the boy she'd first fallen in love with.

But they still had a job to do. A job that required them to be the perfect couple. A couple very much in love.

"I remember being in Italy and we had to finish this job, but the joke was out, I knew he didn't want to be with me. I knew it. He ended it. I was so committed to him. I was so sad. I was just crying on the stairs and he grabbed me and put my hands up against the wall and [he was] laughing in my face."

"That's when I knew that it was all business to him."

"I spent two years after that relationship with litigation lawyers and pretty much lost everything I had trying to get out of that," Alexis explained. But the percentage still stands.

And so she took to Twitter to lash out.

"I said on Twitter that he had a small dick."

Alexis explained that this is probably the thing she regrets posting the most, as it was picked up by news outlets across the globe in an instant. But, she was mad, and she had just found out that her ex boyfriend was going to be getting a cut of all her future earnings.

"I was being so mature about it all, but the reason I said it was because at this point in his 'evolution' this was the one thing that mattered to him. So it was the only way I knew how to trigger him. I knew that it would piss him off."

Since their split, Alexis has seen her ex once.

She was attending a festival, four years after their breakup, and she spotted him. "My whole body froze. And then I had to leave. It wasn't an emotional response, but a body reaction. It was almost like my body was telling me, 'We're not safe, we're not safe'."

But beyond that jarring encounter, the two have gone on to live separate lives.

Alexis' modelling career is still thriving, and she's built a mental health and physical wellness community called @wearewarriors on the side.

Speaking on Call Her Daddy, Alexis shared that she has been dating someone new, but she'll be keeping this relationship off Instagram. For good.

Reply
Upvote
@gu3st "Follow bum around with a camera. To music."
So essentially you are accusing Steven Spielberg of starting the whole concept with Jaws? That man was ahead of his time I tell you.
G
gu3st 5 months ago

Reply
Upvote
1 upvotes
Wait, so, she broke up with him, but was then shocked that their relationship was only business from then?
Tells the world he has a small dick, knows it was wrong but it's okay, because she was mad.
L
laura__palmer 5 months ago

Reply
Upvote
@snorks Although I don't like body-shaming comments like this, the way he screwed her out of her own money, including future earnings, I can understand why she was mad and why she did it. He sounds awful. Imagine having to pay your toxic ex your own earnings for the foreseeable future, you might lash out like that, too.
C
cat 5 months ago

Reply
Upvote
@laura__palmer if Im ever in court I want whichever lawyer he had, truly insane.
S
snorks 5 months ago

Reply
Upvote
1 upvotes
@laura__palmer Did he screw her out of her money? She had lawyers, presumably it is structured like this for a reason.
Ah yes, the old 'they shouldn't have provoked me'.
G
gu3st 5 months ago