It was unlike the many, salacious, breakup conversations that the public is given access to on reality television.

It was not about cheating, or picking wet towels up from the floor.

The conversation was honest and open.

And it was about an issue that affects around 73,000 Australian women every year.

The couple appeared, by all accounts, to be having a discussion about an unplanned pregnancy and the subsequent termination.

So why didn’t anybody say the word?

The coverage of the event was vague, and circled around the clear implications of the conversation.

The clear reason was that Alex and Richie didn’t say it. So why should they?

But abortion is not, and should not be treated like, a dirty word.

Last night Gogglebox contestants reacted to the conversation between Alex Nation and Richie Strahan in their living rooms, and we had the same conversations we all had last Wednesday night mirrored back to us.

“What would a woman do that involves two people that she had to do alone? I think it starts with an A,” Symon explains to Adam, resulting in a look of sympathetic shock. 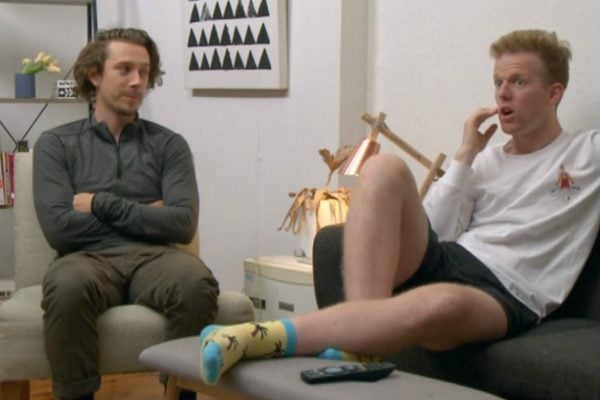 Kate Dalton then comes right out and says it: "Did she have an abortion?"

The family looks on with concern for Alex Nation. The other reactions are purely in the faces of the contestants. There is sympathy mixed with shock, as they appear to realise Richie didn't show up. The words they spoke had been spoken by thousands of Australians around the country as they watched Bachelor in Paradise last week, and in saying abortion out loud the Gogglebox contestants normalised the conversation, removing the stigma from a situation that so many women blamelessly find themselves in.

Of course, there is no way of knowing for sure what the conversation between Alex and Richie was about. It could have been about something else entirely, something the entire nation is unable to know anything about.

But the speculation is fair.

Thank you, Gogglebox, for saying the word.

You can watch Gogglebox on Foxtel Now, Foxtel Go, and tomorrow night on Network 10.

Did anything stop to think about Richie? To me it didnt look like he wanted her to have an abortion. It seemed to be her decision and she changed the date several times. I dont think its clear cut that he is the bad guy for not turning up.

It’s not his choice whether she has an abortion but it is his job to turn up. If he wanted a kid he should have discussed it with her first. Clearly they hadn’t so it doesn’t matter whether he wanted an abortion or not. ITs kind of a non negotiable situation, work isn’t an excuse.