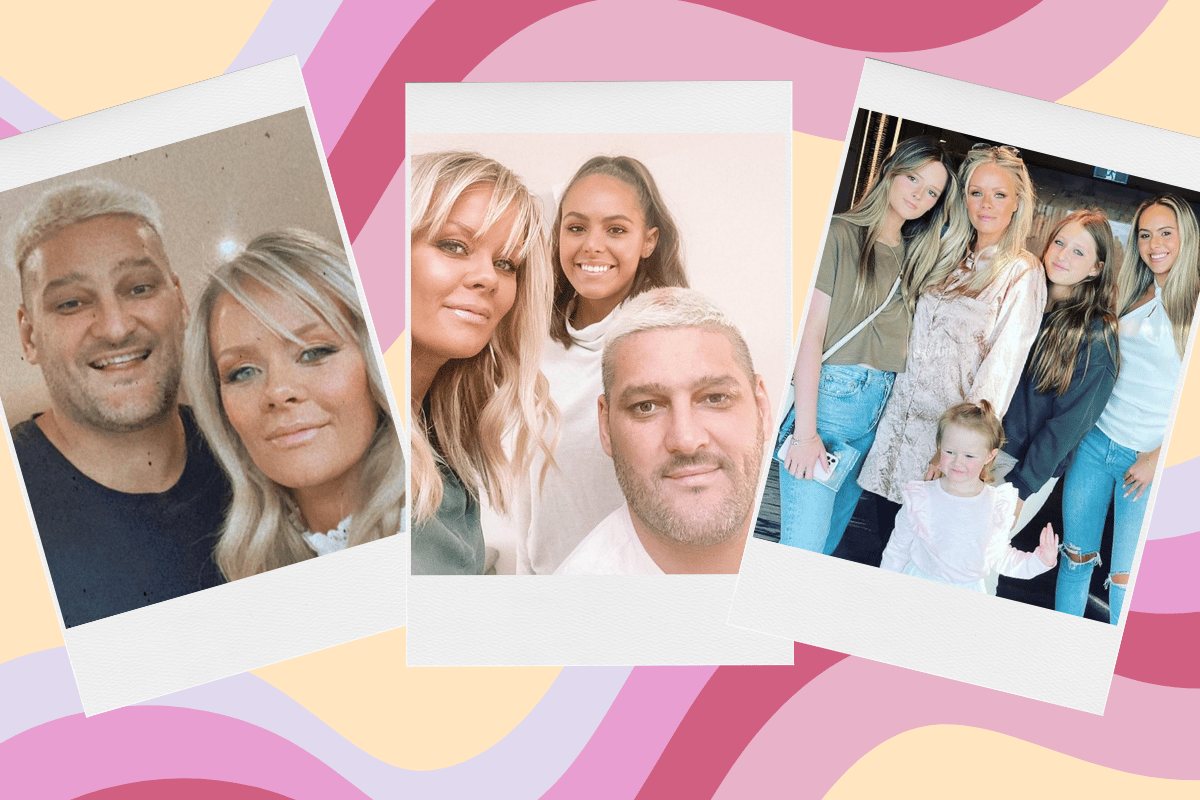 When Alex Fevola was 22 years old, she had her first child, daughter Mia.

Now at 45, the business mogul, author and photographer is a mum of four girls - her oldest being 19 years older than her youngest, three-year-old Tobi.

"I gave birth to [Tobi] when I was 41. And it was such a surprise," Alex tells Mia Freedman on a bonus episode of Mamamia's No Filter.

"I can't even begin to tell you how surprising that was."

Listen to Mia Freedman's chat with Alex Fevola on Mamamia's No Filter. Post continues after podcast.

Alex met up-and-coming AFL star Brendan Fevola when she was 25 and a single mum to three-year-old Mia. At the time, she was still grieving the tragic death of her partner Lonny.

"When I met Brendan, I was at dinner with a friend and I had Mia with me," she explains.

"Brendan enquired after Mia's dad and I told him straight away that her father had died and that I was a single mum. I think actually Mia was the reason we connected straight away. She loved him and he's very good with children. It was a big tick straight away."

While it would be a few years before they welcomed their now 15-year-old daughter Leni, Alex, Brendan and Mia were the perfect trio.

"[Mia's] always been such a delight. She's tagged along with us, you know, from the very beginning. We never went away without her," Alex recalls.

"We were just a trio for those first couple of years and still now she's just she's just a delight."

Brendan proposed to Alex within the first 12 months of their relationship and they wed close to a year later in 2005.

But shortly after the birth of daughter Leni, the couple separated because of Brendan's affair with model Lara Bingle (now Worthington).

The couple later reunited in 2007, before welcoming their second child together, their now 11-year-old daughter Lulu.

While Alex and Brendan later divorced in 2014, it was not the end of their love story.

They got engaged for the second time in 2016 and welcomed fourth daughter Tobi to the family in 2018.

"I had just got my kids to all be at an age where they were very self sufficient," Alex tells Mia Freedman.

"[I was] just getting my life back as far as having a lot more freedom, not having to worry about babysitters, and not having separation anxiety."

But regardless, Alex has "savoured every minute" with her fourth daughter.

"I think being older, you really appreciate that time so much more and you're not in such a hurry to get your freedom back," she says.

"And we're both really aware that their last child and it's just been so special.

"I feel really grateful that I've had that experience a bit later on in life because it's definitely felt different. You love your children the same but the experience has felt different being an older parent."

To listen to Alex Fevola's full chat with Mia Freedman, subscribe to Mamamia to listen to the bonus episode of No Filter here.

Silver Linings by Alex Fevola is out now.