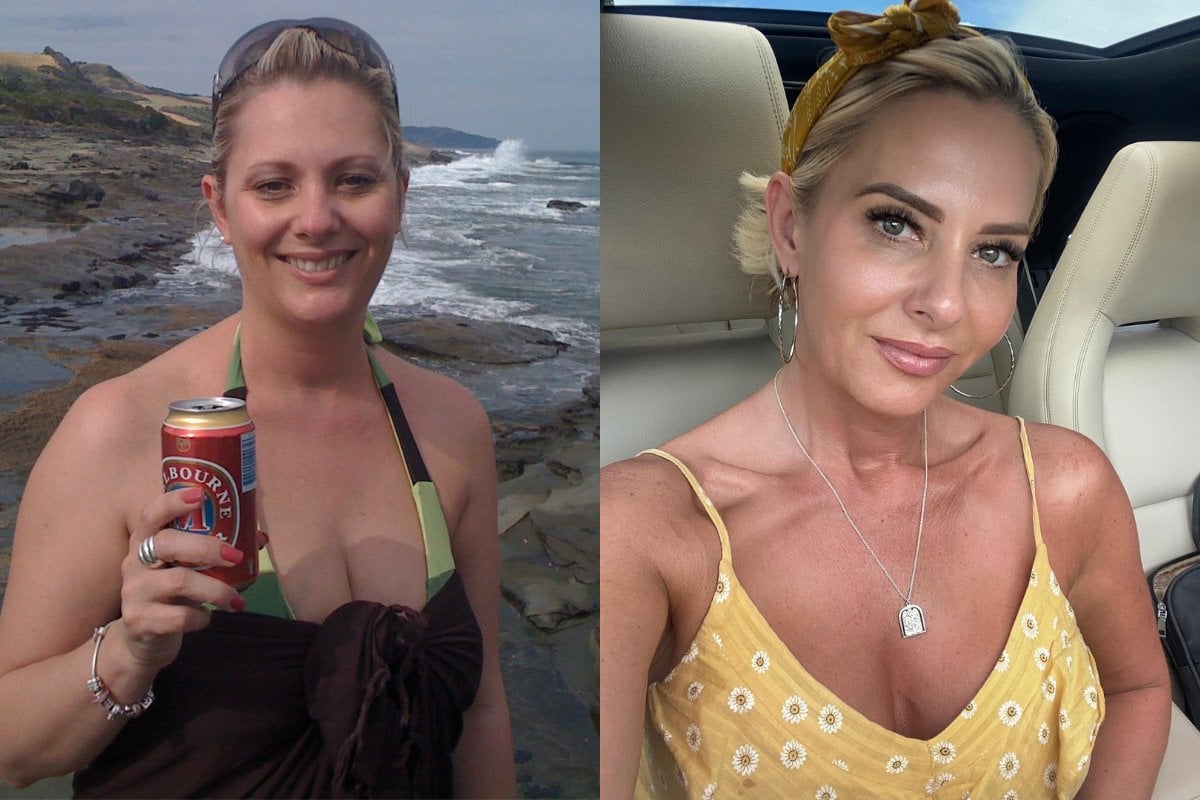 This post deals with addiction and could be triggering for some readers.

It was the tail end of a year-long, 24/7 drinking period.

I’d been moved interstate by my family and had just been enrolled into a rehabilitation program as a forced intervention.

My two beautiful children were being 'shadow minded' by parents due to my inability to look after them properly myself and my husband was flying between states, trying to keep work commitments, terrified of what might happen next.

Watch: Your Body After 1 Year Without Alcohol. Post continues below.

I was skeletal by then, weighing just 47kgs. My hair was falling out, my liver was showing signs of cirrhosis and my triglycerides - the fat levels in my blood - were so high, I was at risk of a heart attack.

I was covered in bruises from unknown sources, with emergency visits frequent.

Doctors told me I had just months left to live if I continued with this self-destruction.

On this particular afternoon, my dad picked the kids up from school and brought them home to me to assess whether I was capable of having them overnight on my own.

Although I’d agreed to a recovery plan, I wasn't sticking to it. He told me he couldn’t leave the kids with me and would take them home to his place.

My daughter was almost 10 years old at the time and she was starting to feel the impact of being moved between family members who were trying to protect her from my mess.

As my dad got the kids ready to leave, she looked at me, dishevelled on the couch, and started to cry.

"Mum, I’m scared you are not going to get better," she sobbed.

They say we all have one rock bottom moment but I disagree. I had many. Just weeks before this, I'd ended up in emergency after drinking from my parents' liquor cabinet while they were out of town and my sister was caring for me.

But this moment, with my daughter sobbing, fearing for my life, sat differently. It sunk into my soul. It accessed a part of me that was still functioning unanaesthetised and stuck like glue to the will I still had to live.

I had been drinking to medicate for years. To numb out the pain of a messy divorce, child custody arrangements and a truly battered sense of self-worth.

All of this on top of anxiety and obsessive-compulsive disorder which had set the tone for my mental health most of my life.

I had two types of drinks.

The ones that sat on the table visibly for everyone to see and the ones that were hidden in a cupboard, drawer or under a bed that were used to top up the first.

I'm not sure that I ever really had a healthy relationship with alcohol.

I always drank for the 'feel' not the taste. Maybe as a teen I partied just like teens do, but I quickly learnt that when I wanted to escape what I couldn’t control in my head, alcohol was a brilliant solution.

There were years where it wasn’t really a problem, but slowly alcohol became the only way I knew how to cope with 'life'.

Ironically, I was robbing myself of just that - living.

I quickly lost control of it.

Dealing with a drinking problem is complex enough if your responsibilities are only for yourself. But the pressure of looking after a family adds further duress that can become completely overwhelming and inevitably unmanageable.

I’d wake in the morning inevitably with a pounding head and the shakes.

My first thought would be, "What did I do last night?" quickly followed by "What do I have to do today?".

There was a constant tug of war between my state of consciousness and impaired memory.

Then there was the run to the toilet with the relentless diarrhoea that dictated my overall movements.

This had become so chronic at points in time that I carried a spare pair of undies in my bag just in case I didn’t make it to one of the emergency public toilet stops.

My days were meticulously planned in my more sober moments.

Lunches, uniforms and school items were prepared the afternoon prior so that when the evening came around, there was nothing to co-ordinate except trying to be as present I could be with my babies.

On really bad days I would get the kids ready for school and drop them off only to promptly return home, swig a few glasses of wine and go back to bed with the alarm set for school pick up.

I had it down pat: that was just enough time to be under the limit again.

On days where I knew I couldn't drive, I'd call another school mum, asking them to pick up my kids because I was unwell.

Of course, I thought it was going under the radar. But all around me people were starting to notice what was going on.

I was losing count of the way it was negatively impacting my life.

The cycle of self-sabotage and guilt felt never-ending. In fact, it was enough to make me pick up another drink.

The road to recovery for me was not linear.

After attending a day patient program in a rehab centre for almost three months, I still held on to the hope that I could still be a social drinker.

You know, moderate and control when and how much I drank. But that never worked. As the saying goes, 100 is never enough and one is too many.

The minute that alcohol hit my lips I was physically compelled to have more. It was more than psychological; it was chemical.

After 18 months of experimenting, I knew that alcohol no longer had a place in my life. That is, as long as I wanted to thrive.

The most pertinent part of my recovery was exercise.

Healthy living became the core foundation of my wellness. It was both a distraction and a vital recovery tool and is now the centre of my flourishing and fulfilled life.

Without the clouding of alcohol, I had full clarity for the first time in years. What I deemed as large obstacles before were now manageable as long as I DIDN’T drink.

My kids trusted me again. They felt safe in my presence. They felt loved. They had my full attention.

But best of all, they now had an example of how to live your life and cope with everyday challenges without escaping through substance.

This was their 'normal'. I’d changed the narrative and created a generation of kids that know that alcohol is simply a diversion, not a solution and can quickly become an unwelcomed dependence.

From a near death alcoholic mum, I've now become a role model.