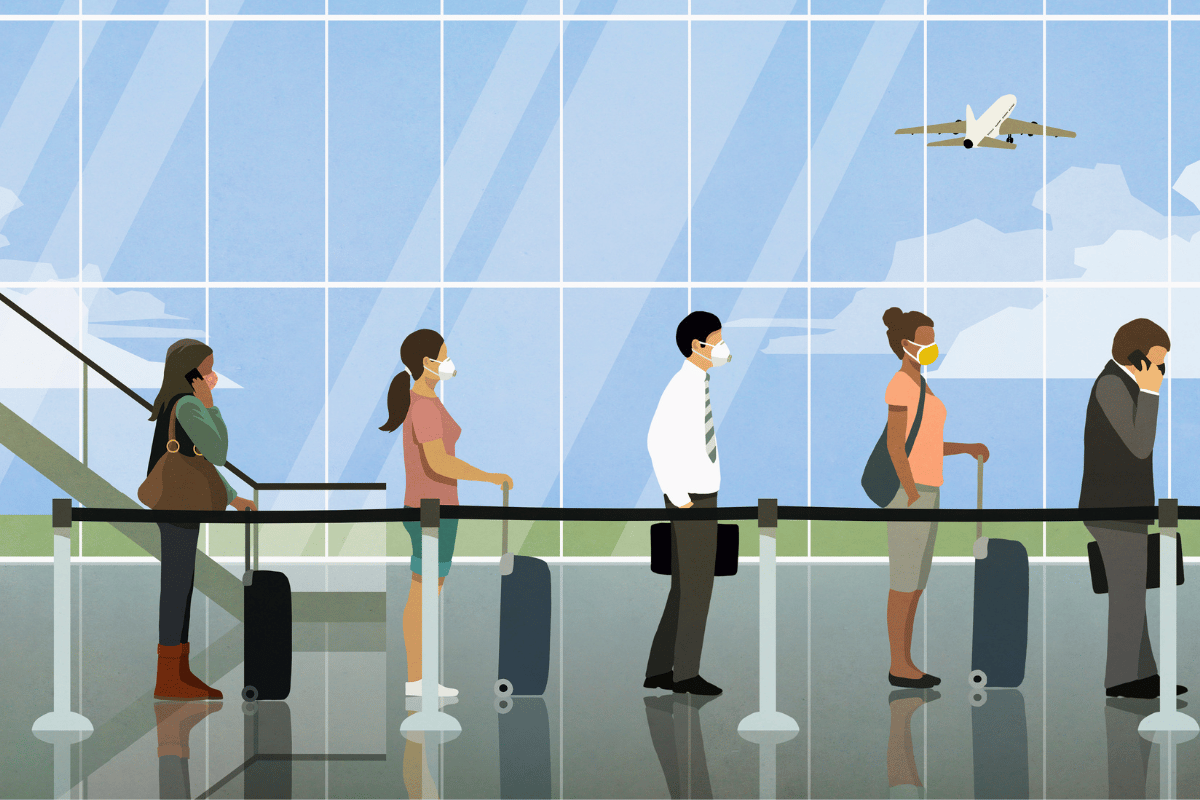 Danielle had big plans for her 20th wedding anniversary - a much anticipated adventure in Europe.

But as she and her husband hurried around the house packing up their final belongings for their trip away, they got an email.

Their Singapore to Copenhagen flight had been cancelled.

They could get to Singapore. But after that - they'd be stranded.

Not knowing what else to do, they headed to the airport. Their airline was great, initially, saying they knew the flight had been cancelled, were working on a replacement and would give an update shortly.

24 hours later, they were still in Australia.

The airline sent them down to Sydney from Brisbane, thinking they'd have a better chance at getting a viable flight...but unfortunately, it just left them in a stickier situation with a lack of connecting flights.

"We just went - you know what, the universe is trying to tell us that we really shouldn't be going anywhere. We were left trying to get home to Brisbane from Sydney, and it cost us $800 to get home. I then started to feel unwell and icky, went and did a RAT test and discovered - not only do I not have a holiday, I also have COVID!" Danielle told Mamamia's news podcast The Quicky.

"What a happy anniversary it was! I can laugh, but I did spend the entire week in bed sobbing," she said.

Danielle and her husband certainly aren't alone. If you've flicked on the morning news over the past few weeks and months, you will have noticed airport chaos creeping into those headlines more than normal.

Between cancellations, delays and lost baggage - there's a lot of disgruntled travellers out there.

Qantas cancelled one out of 13 flights during the month of May. By June, the airline had confirmed they were slashing domestic flight schedules by up to 15 per cent through to September and by 10 per cent through to March 2022. (That's despite the demand remaining high).

There are stories of rescheduled flights that no longer match connecting flights, baggage that doesn't turn up for weeks and don't get us started on wait times for speaking to an airline representative in the call centres.

So what the hell is going on??

James Goodwin is the Chief Executive Officer of the Australian Airports Association, the national voice for Australian airports, representing the interests of more than 330 airports and aerodromes across Australia.

In his opinion, the reason the aviation industry appears so overworked right now, comes down to a few factors.

"It is school holidays and it is busy, so that really is the number one issue right now. But at least it is great that after two years of disruptions and lockdowns, people are getting out and visiting their relatives and having a holiday if they're able to. But what it means is there is a strong demand on the aviation system, and there are some staff shortages," James explained to The Quicky.

Although passenger numbers are just about back at 100 per cent of pre-COVID levels, the overworked staff body and the fact so many left the industry amid the pandemic, only to not return, has proved challenging. Incredibly, 70 per cent of the workforce at the height of COVID were either temporarily stood down on reduced hours or made redundant.

Departments experiencing major staff shortages include baggage handlers, engineers and security screeners. Then there's the higher number of sporadic absentee numbers right now thanks to COVID and the flu.

"Most people have gone on to other parts of the economy," James explained. "We've got a very low unemployment rate across Australia and we've got record job vacancies. And aviation is harder hit by this - we have more positions to fill and we have not yet recovered."

Chuck in wet weather down much of the east coast affecting actual takeoffs and landings, and you've got yourself a mixing pot of issues.

1st day of school holidays at Sydney Airport. Took my friend 80 minutes to get to bag drop @9NewsSyd pic.twitter.com/72i3iy3ugw

Another issue the aviation industry is facing, is something commuters know all too well; the price of fuel.

"It's very expensive," James said. "The actual cost does vary, but the aviation fuel situation is not dissimilar to what you're putting in your car or SUV. It has almost doubled in price in the last month and even in the last six months there has been a rise. And that is having an impact on the cost of long-haul and international flights."

So what can we as travellers do to make travel easier on ourselves?

James suggests getting to the airport a little earlier than normal. However, authorities are reminding us that baggage drops for domestic flights do not open until 90 minutes prior to the flight's departure. So it's not required to arrive earlier than that.

If you can, travel off-peak.

Mamamia's News Editor Gemma Bath travelled between Melbourne and Sydney during the school holiday period on a Wednesday and Monday evening, and found the terminals busy - but manageable.

"My advice would be prepare for the worst, but hope that you get the best outcome," James admitted.

"Come to the airport prepared, arrive on time, try and check-in online, bring COVID paperwork if needed, make sure you book transport well in advance, and keep an eye on transport and traffic in the lead up to getting ready to head to the airport. Hopefully, you will only be at the airport for a short time - just remember to think about the holidays, think about the reason why you're actually travelling and we'll get through it together."