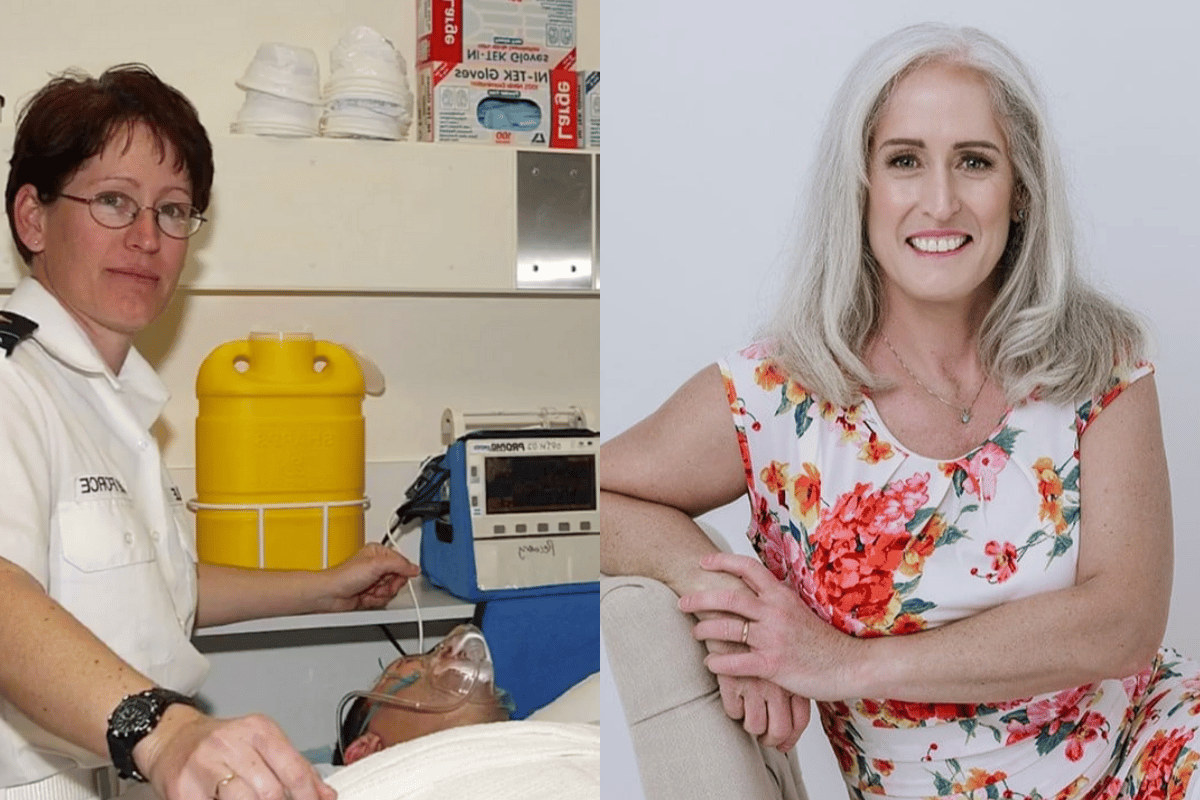 Michele Scherr knows all too well the horrors that war brings.

She spent almost 20 years as a Nursing Officer (Registered Nurse) with the Royal Australian Air Force.

And for those long years that Michele was a part of the Australian Defence Force (ADF), she was deployed to a number of high-risk operations, including in East Timor, Iraq and Afghanistan.

Watch: Debra Swain speaks about seeing signs of PTSD in her partner. Post continues below.

Initially, she was attracted to the challenge.

But as the years went on and the list of witnessing traumatic experiences grew longer, Michele was struggling.

You would imagine that working within a healthcare system while experiencing mental health issues would mean Michele would have access to support - knowing where to go and who to speak to.

But from her personal experience, she felt isolated, desperately requiring better support both from an organisational level and directly in the workplace.

And it left her in a vulnerable state.

As a young adult, Michele started off as an undergraduate nurse before finding her way into the Royal Australian Air Force. Once Michele got a taste of what the job looked like - the adrenaline, the challenge and the ability to help people - she decided to stay.

For the next 20 years, Michele was deployed a number of times. And with each high-pressure experience, the trauma was slowly building on top of Michele's shoulders.

"During my last deployment to Afghanistan, I worked in the resuscitation bays, ICU, and was evacuating ill and injured ADF personnel," Michele shared.

"My job was to fly wherever I needed to in Afghanistan to pick up an ADF patient and transport them to the next staging facility, as determined by their condition. In one particular instance, the fellow had significant eye injuries, and we were being transported in coalition partner's planes. It was very stressful."

While working in these conflict zones, Michele was constantly in a state of hyper-vigilance.

"One of the things I almost ironically laugh at now was that in the criteria for diagnosing Post Traumatic Stress Disorder (PTSD), one of the questions is, 'Have you been exposed to dead bodies before?' I'm a nurse in the ADF - an emergency nurse at that - of course I have," she said.

"But what really set off the hyper-vigilance was the fact I was constantly on edge. Worrying about my safety and security, I was constantly aware of how vulnerable I was being a female and a military member. Add to that the fact the Taliban are trying to kill you. It was a lot." 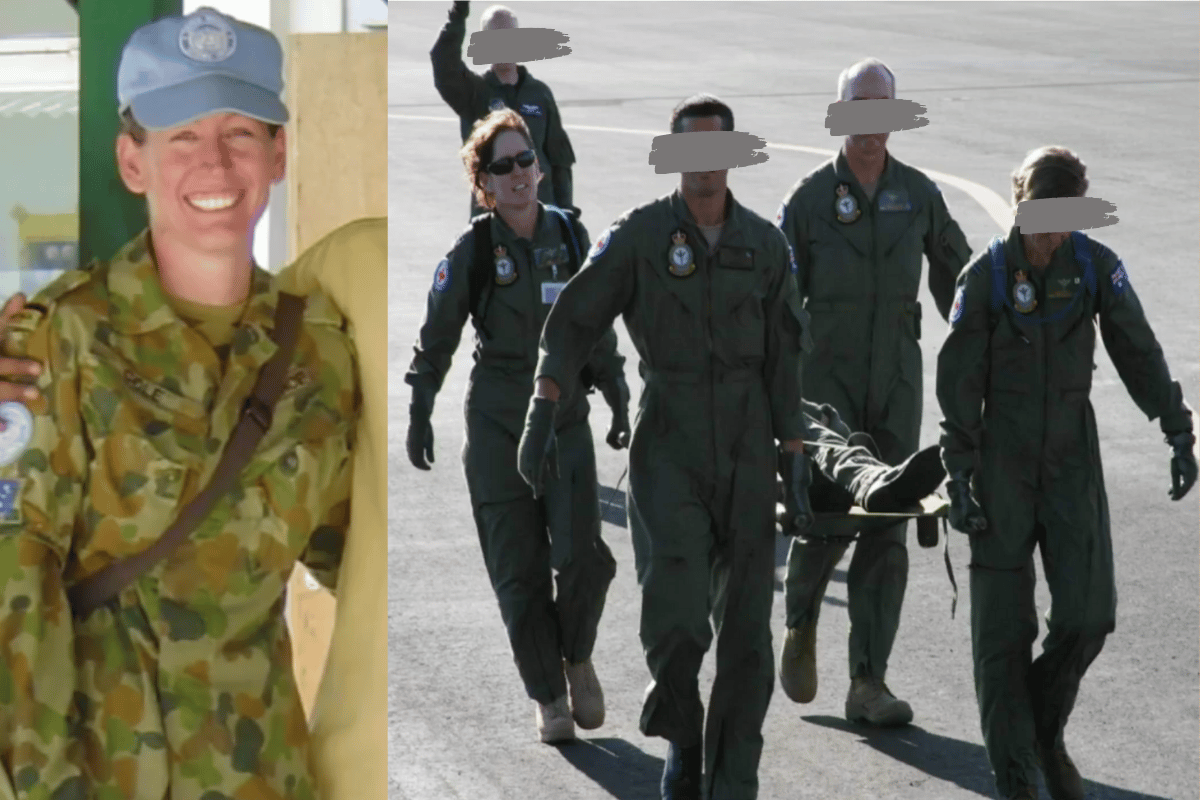 Michele in the army. Image: Supplied. 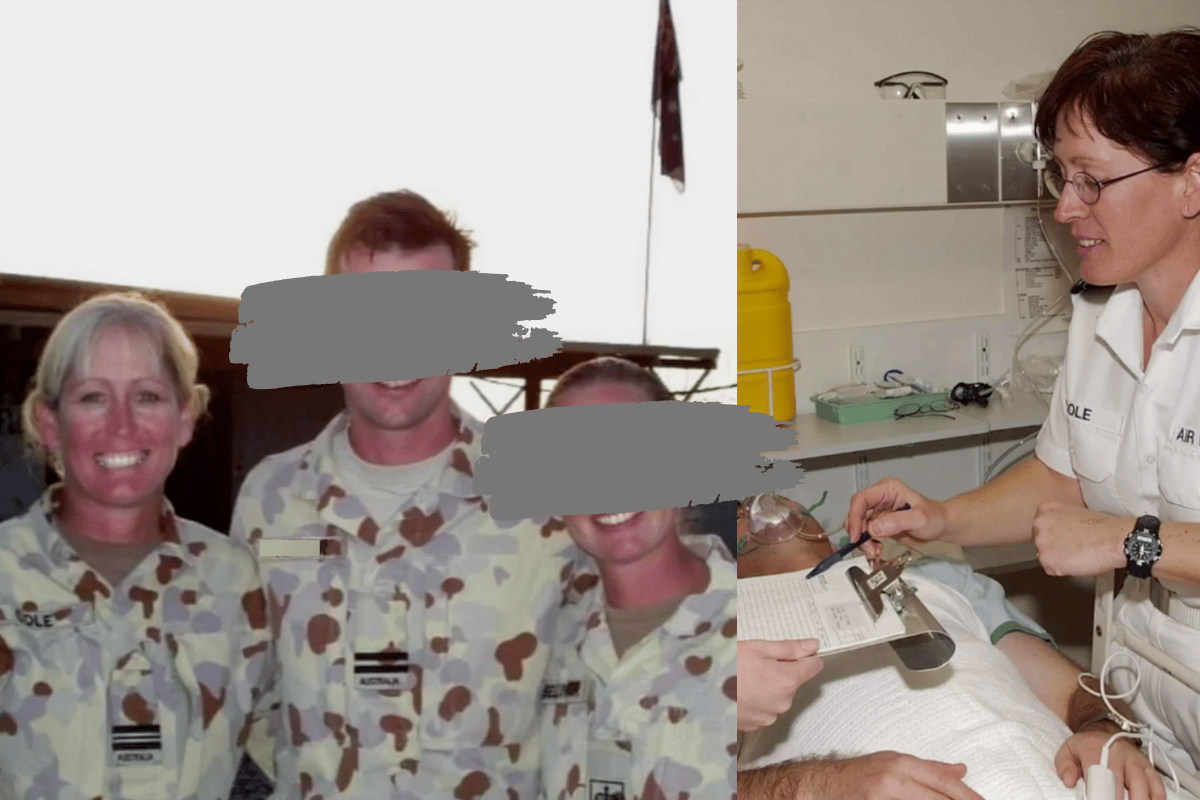 Michele in the army. Image: Supplied. A person can only be hyper-vigilant for so long - something has to give. And for Michele, it was her mental health that bore the brunt.

"I managed to complete the deployment, but after Afghanistan, I returned from there with PTSD. It wasn't necessarily one factor or one specific experience that led to the diagnosis, but rather a culmination," she said.

"It all became too much when I was posted away from my social support, medical support, and unable to access the necessary help when it was needed."

Throughout her time in the ADF, Michele was also a single mum to two boys. The fly-in-fly-out nature of her job added extra pressure to her family life and wellbeing. Michele was lucky to have her parents around to step in for her when she was on deployment.

"I didn't have to worry about my boys," she said. "The household expenses were automated, the kids had all they needed. It was just about having my parents there to help with the day-to-day running of things, making sure they were fed, taken to school and in a loving home."

By the time Michele returned from Afghanistan, her sons were turning 16 and 18. It wasn't until she was home in Australia and after being discharged that she saw the impact her work had not only on herself but on her family.

"It was at times quite worrying," she told Mamamia. "One of my sons had challenges with his mental health, and I do sometimes look back and wonder what I could have done differently. But I know that the example I set was that no matter what life throws at you, try to make the most of what you've got."

But as Michele noted to Mamamia, it was this 'absolute can-do' attitude that was perhaps her downfall - as by struggling on and trying to prove to everyone she was okay, she was actually making things worse.

"I was saying to myself, 'I won't show that I'm vulnerable, I won't show that there's anything wrong with me, because I'll lose my career.' If I lost my job, I thought there would be nothing left for me," she explained.

"I fortunately had a specialist and psychologist from my hometown who were very good - but the system I worked within didn't support me."

Some time after returning from Afghanistan, Michele was discharged from the ADF, with her PTSD diagnosis factoring into that decision.

For any member leaving the ADF, that transition is incredibly difficult.

Listen to No Filter: If you're struggling right now, this is for you. Post continues after audio.

"When I was discharged I thought, 'Is there anything left for me to live for?' It was the most horrific situation. The suicidal ideation - hitting rock bottom was a defining moment," Michele said.

Michele has said she struggled to find emotional assistance during this time. It was also a particularly unique experience, given she knew the healthcare model better than most, and yet she still found it hard to navigate when seeking assistance with her PTSD.

Her story doesn't necessarily represent the mental health support available to ADF members today. But in her personal experience, she felt completely isolated.

"I remember seeing this doctor that contacts within Joint Health Command had organised for me. I ended up taking a friend with me to see the doctor because I was so unwell and stressed. The doctor ended up asking us to leave because he was feeling pressured to talk to me, as it was his lunchtime," Michele said.

"It basically felt like he was saying to me, 'You might be having a mental health crisis, but I need you to leave my office as I'm busy and hungry.' From a general perspective, there is absolutely help available - whether it's the right sort or enough help for every individual, I think that is the question.

"Everyone has their own experience, and no one is any better or worse than someone else. For anyone diagnosed with PTSD - particularly veterans - it's a similar feeling, a similar panic, the same mental health struggle. People just reach that point for different reasons."

Four years on from being discharged, Michele says she is in a much better place mentally. She also wishes that the system hadn't forgotten her in the first place.

Now, she's using her experience to try to help others in a similar position.

"I think I've only really started to recover recently," she said. "Most of my healing has taken place since leaving. I haven't had to put on my uniform, be a particular persona - a strong leader. In taking off the uniform, I've been able to release some of that trauma."

And someone who is reaching that stage of stepping down from the ADF is Michele's husband. The pair married in 2017, and he is currently serving in the Air Force, but is set to retire soon.

"It'll take time for him to decompress. He's ready to step out of the uniform and take on a different role. Just after we married he went on deployment, and of course since we both used to live and breathe military, it was important for me to have that break and not have to hear military things being brought up in conversation while he was away," Michele said.

"I needed that. It was the best thing for decreasing my hyper-vigilance, along with finding an amazing group of female friends in my local area and community groups.

"It's good to have a positive focus and still be able to make a difference - let's face it that's why so many go into the ADF. To see that I can still contribute to my community and for these women to accept me and not expect anything of me has been a huge part of my recovery.

"That's what gets me out of bed every morning - still seeing I can make a difference."

Michele Scherr is a Self-confidence and Success Mentor. To hear more about her story and the work she does, you can visit her website here.