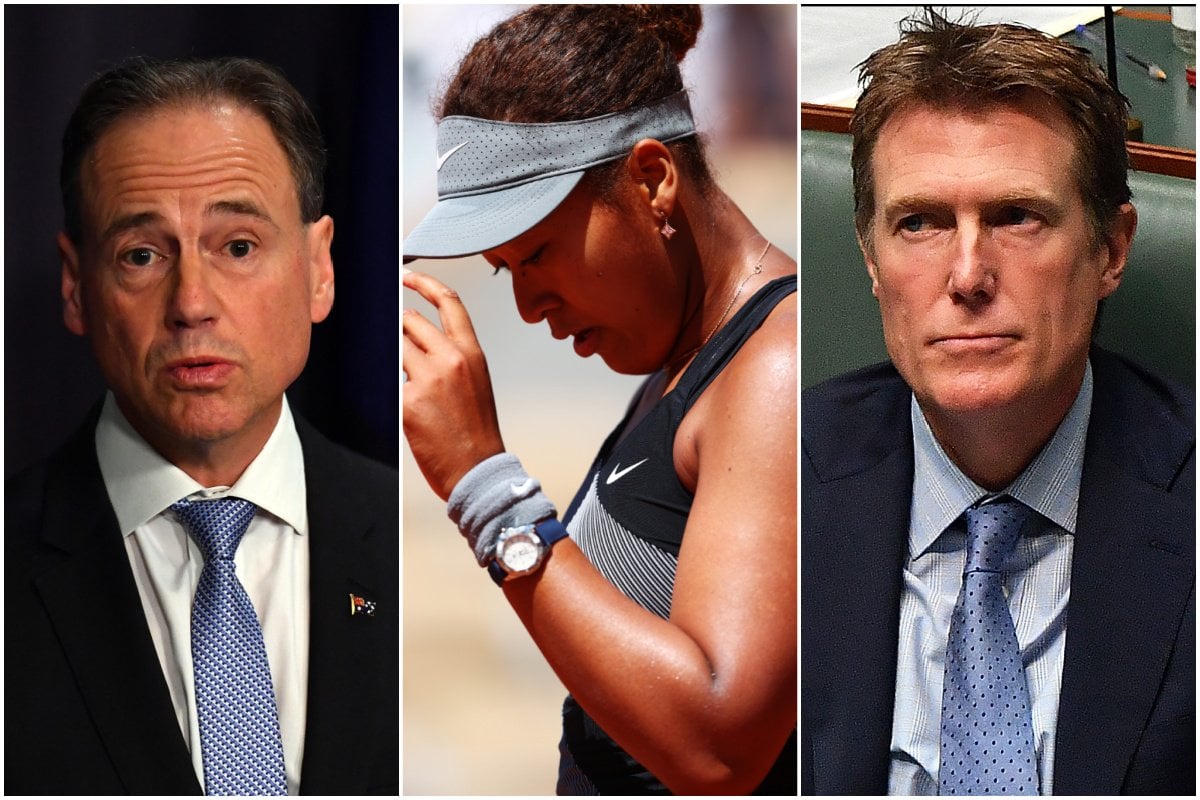 Vic lockdown 'ring of steel' not ruled out.

A return to the so-called "ring of steel" separating Melbourne and regional Victoria is not off the table if the state's lockdown drags out beyond seven days.

Acting Premier James Merlino warned the outbreak could get worse before it gets better, as three of 11 new cases reported on Monday were linked to a Melbourne aged care home.

A 99-year-old woman is among those those who tested positive.

Mr Merlino added it was too early to tell if the statewide lockdown would be extended beyond 11.59pm on Thursday, saying the next few days would be critical.

CHO Brett Sutton says a return to the ring of steel around #Melbourne is “not out of the question”.

The idea is welcomed by some regional communities, locked down hundreds of kilometres from the outbreak’s epicentre. @andrew_lund #9News pic.twitter.com/WC1a92e7ju

None of Victoria's 60 active cases reside in the regions, although several of the state's more than 320 exposure sites are outside the city.

Victoria's Chief Health Officer Brett Sutton could not rule out a return of the "ring of steel", a series of road border checkpoints that stood for weeks last year as the regions recovered from the second wave quicker than Melbourne.

The Morrison government is under renewed pressure over its aged care coronavirus response after dropping a rule to ensure staff do not work across multiple sites.

It emerged on Monday the federal government scrapped a requirement for aged care workers to only work at one facility in November last year.

"The federal government promised us that by March every single aged care resident and aged care worker would be vaccinated. They have not met that target by any stretch of the imagination." - @ClareONeilMP #abc730

Despite Victoria's concerning outbreak, the rule wasn't reinstated until the Commonwealth designated Melbourne as a coronavirus hotspot on Thursday.

Health Minister Greg Hunt said about 4.7 per cent of aged care staff had worked across multiple sites as he stressed the importance of flexibility in periods without outbreaks.

He said case numbers were the main factor in determining whether the single-site rule was in place.

"That is something that has been well established in consultation with the states, and so once that was reached then the definition was triggered," Mr Hunt said.

Labor's health spokesman Mark Butler was scathing of the decision to lift the ban in November.

Aged care homes in Melbourne have been plunged back into a coronavirus outbreak, after the federal government allowed staff to once again work across multiple sites. https://t.co/511aQMeDoC

"This latest outbreak in aged care is a direct result of Scott Morrison's gross negligence and dangerous complacency," he told reporters in Canberra.

Of Australia's 910 coronavirus deaths, 685 have been aged care residents.

A Melbourne pastor has been remanded in custody after anti-lockdown protests at the weekend with more planned for the coming weekend.

Separately, an aged care worker has been identified as the woman who breathed on a 9News reporter's face during weekend protests.

This woman - who deliberately breathed heavily in my face at Saturday’s anti-vax rally - is an aged care worker with @Baptcare. I feel for the residents she supposedly looks after. Sickening. pic.twitter.com/4pn7R4J5jV

Baptcare later confirmed the woman who appeared on the news was an employee. They didn't comment on whether the staff member would face any disciplinary action.

Christian Porter has dropped his defamation case against the ABC.

Federal minister Christian Porter has decided to discontinue his defamation action against the ABC and journalist Louise Milligan, the broadcaster says.

"All parties have agreed to not pursue the matter any further," the ABC said in a statement on Monday.

"No damages will be paid.

"The ABC stands by the importance of the article, which reported on matters of significant public interest, and the article remains online. "

Former Attorney General Christian Porter has dropped his defamation case against the ABC and one of its journalists.

The politician launched proceedings against the public broadcaster over its reporting on allegations he raped a woman in the 1980s, a claim he strongly denies. pic.twitter.com/dfDVEx0PCi

The February 26 article has since been updated with a statement confirming the "unnamed Cabinet minister" subject to a woman's rape allegation was Mr Porter but that the ABC "did not intend to suggest that Mr Porter had committed the criminal offences alleged".

"The ABC did not contend that the serious accusations could be substantiated to the applicable legal standard – criminal or civil," the editor's note says.

"However, both parties accept that some readers misinterpreted the article as an accusation of guilt against Mr Porter. That reading, which was not intended by the ABC, is regretted."

The former Attorney-General filed a claim for defamation on March 15, alleging the story defamatory because it imputed he raped a 16-year-old girl in 1988 and that contributed to her taking her own life.

Shadow Attorney-General Mark Dreyfus said Mr Porter's decision to abandon the case meant Prime Minister Scott Morrison no longer had an excuse to refuse to hold an independent inquiry into the allegations.

Naomi Osaka has opened up about her struggles with depression in announcing her withdrawal from the French Open because of the furore caused by her boycott of media duties.

The world No.2 won her opening match against Patricia Maria Tig on Sunday but her decision not to take part in press conferences or interviews has been the biggest talking point of the tournament.

The grand slams reacted strongly to Osaka's move, releasing a joint statement on Sunday that, along with a fine of 15,000 US dollars (approximately $A19,400), threatened her with potential disqualification and a ban from future tournaments should she not reconsider.

Tennis star Naomi Osaka withdraws from the French Open. She'd been fined for not talking to media at the event, citing mental health reasons. https://t.co/dO35LG1mFL

Osaka wrote on Twitter: "Hey everyone, this isn't a situation I ever imagined or intended when I posted a few days ago.

"I think now the best thing for the tournament, the other players and my well-being is that I withdraw so that everyone can get back to focusing on the tennis going on in Paris."

Osaka said she had suffered bouts of depression since winning her first slam title at the US Open in 2018, when she lifted the trophy to a chorus of boos after opponent Serena Williams was awarded a game penalty, and that talking to the media triggered anxiety.

"I never wanted to be be a distraction and I accept that my timing was not ideal and my message could have been clearer," she continued. "More importantly, I would never trivialise mental health or use the term lightly.

"The truth is that I have suffered long bouts of depression since the US Open in 2018 and I have had a really hard time coping with that.

"Anyone that knows me knows I'm introverted, and anyone that has seen me at the tournaments will notice that I'm often wearing headphones as that helps dull my social anxiety.

"Though the tennis press has always been kind to me (and I wanna apologise especially to all the cool journalists who I may have hurt), I am not a natural public speaker and get huge waves of anxiety before I speak to the world's media."

Five men have been arrested and charged after the cenotaph in Martin Place was desecrated in Sydney's CBD on the weekend.

Police on Monday appealed for public help to identify the men seen on CCTV climbing on the cenotaph and sitting on the shoulders of the bronze statue of a soldier about 3.10am on Saturday.

The group is accused of vandalism that damaged the soldier's bayonet.

APPALLING: Police are hunting a group of males who 'stupidly' climbed on the Martin Place Cenotaph in Sydney to take photos, before damaging one of the statues.

Earlier Premier Gladys Berejiklian condemned the vandalism, saying it's important to understand the sacrifices made by veterans.

"I think it's really hurtful that a small number of Australians don't appreciate the sacrifices many Australians made, who lost their lives and lost their livelihoods over many, many decades for our freedoms," Ms Berejiklian told reporters.

"It's incumbent on us to make sure that every single Australian citizen is aware and grateful for the sacrifices made by our ex-servicemen and women."

Queensland pollies in for a "significant" pay rise.

Queensland's politicians are in line for a pay rise after a tribunal found the economy is strong enough to deal with the additional cost.

MPs will be earning significantly more by September 2022, under a series of increases recommended by the Queensland Independent Remuneration Tribunal.

The tribunal said Queensland politicians haven't had a raise since 2017, putting their salaries behind those enjoyed by counterparts interstate.

Queensland MPs will be getting a Pandemic pay rise despite a promise to freeze politician's wages during COVID-19. #9Today pic.twitter.com/kFnJLTsNEH

"Since the tribunal considered salary levels in 2020, the economic and social circumstances have stabilised to the extent that a salary increase is now justified for members," it found.

Married Chinese couples may have up to three children, China has announced in a major shift from the existing limit of two after recent data showed a dramatic decline in births in the world's most populous country.

Beijing scrapped its decades-old one-child policy in 2016, replacing it with a two-child limit to try and stave off risks to its economy from a rapidly aging population.

China announces three-child policy, a major policy shift from the existing limit of two children after recent data showed a dramatic decline in births in the world's most populous country https://t.co/PPWFsDCI2h

But that failed to result in a sustained surge in births given the high cost of raising children in Chinese cities, a challenge that persists to this day.

The policy change will come with "supportive measures, which will be conducive to improving our country's population structure, fulfilling the country's strategy of actively coping with an ageing population", the official Xinhua news agency said following a politburo meeting chaired by President Xi Jinping.

- Peru has announced a sharp increase in its COVID-19 death toll saying there have been more than 180,000 fatalities since the pandemic started.

- At least 50 people have been killed in two attacks on villages in eastern Democratic Republic of Congo in potentially the worst night of violence the area has seen in at least four years, the Kivu Security Tracker (KST) research group says.

- The OECD says the global economy could grow by "nearly 6 per cent" this year but the pandemic recovery could be "very uneven."

Reply
Upvote
2 upvotes
The point of Porter taking legal proceedings against the ABC was to prevent a formal enquiry into the events surrounding Kate's death. Morrison stated the enquiry was not appropriate while there were legal proceedings afoot.
Well now there aren't and we haven't forgotten her, as they'd hoped. We need to maintain the pressure for an independent formal enquiry into all the events surrounding this matter.
G
gypsy a year ago

Reply
Upvote
@anonymous  One hundred percent agree. Bring it on.
C
cat a year ago