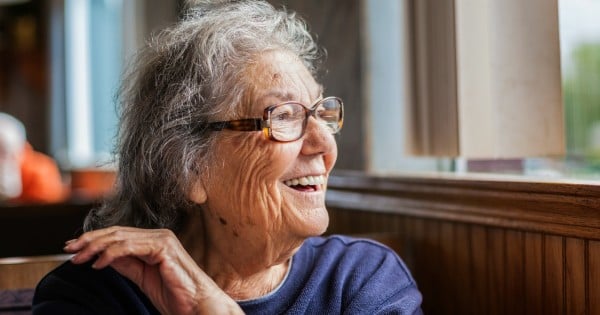 Thanks to our brand partner, HESTA

“We have a resident here, he’s been here a few years now and he’d been living in a boarding house for a long time. He didn’t have his own room, or bathroom. When he first came here and when saw his room, with its own bathroom, he started crying.

“He had stopped talking when living in that boarding house and went through a dark and difficult time. When he came here he didn’t speak, he didn’t write, he didn’t do a lot of things. Within six months he was writing us letters, writing us stories. We got him one of those mindfulness colouring books and now he does pictures for everyone. He’s much more social, goes on outings and helps to run some of the activities, too.”

Kristen Grainger has worked in aged care for 20 years. For the past 12 years she’s worked at Catholic Healthcare’s Charles O’Neill Hostel in the New South Wales coastal city of Newcastle.

She has been the residential manager for the past 10 years and has overseen the establishment of the “A Safe Place to Call Home” program, which creates a safe residential environment for people with mental health conditions that also require residential care.

It’s a unique program, designed to strengthen care for some of the most vulnerable people in the community – many of them homeless or living in boarding houses before they arrive.

“We’ve always been a dedicated aged care service for people from a socially and financially disadvantaged background, which does bring us a lot of people who have been homeless or are at risk of homelessness," Kristen explains.

“Over the past eight years we’ve seen that some of the people coming here might have been homeless for a reason. There wasn’t much out there for these people and when they came here a lot of the people had mental health conditions.”

It was a program born from the need to provide better care to residents at Charles O’Neill, and it has since helped to build the home’s reputation for excellence.

Around 75 per cent of the residents at Charles O’Neill have mental health conditions and they are provided with individually tailored care.

“We were interested and enthusiastic about caring for these kinds of people and it just got to where most of the people on our waitlist have these challenges,” Kristen says.

“We’ve always been a dedicated aged care service for people from a socially and financially disadvantaged background." Image: iStock.

So the team decided to rethink how they cared for these more challenging residents, and reached out to community mental health teams to create individual programs.

“When they move in we have a bit of time to get to know them, and then we invite psychologists and community mental health workers and so they come in and we hold detailed discussions about the specific person," Kristen says.

“There’s not really a lot of a services that have this kind of level of people with mental health conditions so our idea was to really develop that relationship with the community mental health team and look at each person individually.”

“The main thing in the program is to know your resident really well so you can see if there’s something bad coming and they’re on a downward spiral.”

The team’s ability to anticipate problems has meant they’ve had great success improving the physical and mental health of their residents, providing them with a much greater quality of life.

“It’s about assisting our residents to live comfortably and feel safe. We have a resident that has been here for about three years and for the first year she spent a lot of time in hospital but since then she hasn’t been admitted for two years. That’s a really big achievement and something we’re very proud of.”

Kristen is very proud of her team’s work, which has been recognised with a series of awards, most recently the HESTA Aged Care Awards 2015 team innovation award. As part of that award, the program received a $10,000 development grant, courtesy of the Awards sponsor, industry super funds’ owned bank ME.

Kristen said the prize money would help fund the continuing employment of an art therapist to work with residents on a weekly basis and contribute to further staff development and education. “Staff education is one of the most important things, and we can always use more,” she says.

The prize money would help fund the continuing employment of an art therapist. Image via iStock.

The HESTA award has also meant the program is seeing more referrals from further afield, as recognition for the excellent work Kristen and her team do increases. And even more importantly, Kristen says, the recognition is a real boost for staff who do a hard job every day.

“I think sometimes we forget that we’re doing something a little bit different, a little bit more unique and it really boosts staff morale,” she says.

“We have been getting referrals from hospitals in Sydney who we’ve never heard from before. Our waiting list has grown quite a bit. It’s really nice to have that recognition.”

When I speak to Kristen, it is a sad day at the service. A 105-year-old resident has just passed away and the staff are in a sombre mood. “That’s hard, because we are a community and we get to know everyone so well and they are all a part of the little family here. There’s a real sadness in the staff today,” she tells me.

So I ask her what’s the best thing about her job. “There’s a lady who lives here who you never know whether she’s going to be angry with you when you walk in in the morning and then some days she looks at you and says she loves you and it’s just a really warm and fuzzy feeling.”

At 40, Kristen has been working in the sector half her life. And she says she can’t imagine working anywhere else.

What would you like to see more of in the aged-care industry?

Blessings to you Kristen and all your staff.
You are amazing people - thankyou for the work you are doing xx

What an inspiration you and your team are, Kristen .... I only wish there were more programs like this around the country ... since they closed down Sydney's main psychiatric units and the government sold off the land, those who were previously cared for in this type of facility were tossed out into boarding houses where they often lived in squalor and were not supervised taking their own medications. My late aunty who suffered with schizophrenia most of her life, was forced to take this path and had to jump in front of a train and lose both her arms (because the voices told her to) before she was taken into care where she fortunately lived the last few years of her life safe and content. She even found love. I am to understand that so many people like my late aunty, who should have been in psychiatric care, were placed in boarding houses where they ceased taking their much needed medication and ended up committing a criminal misdemeanour and found themselves in prison, rather than the psychiatric care that should have been theirs. Sadly, for some, this was a safer alternative than the street.