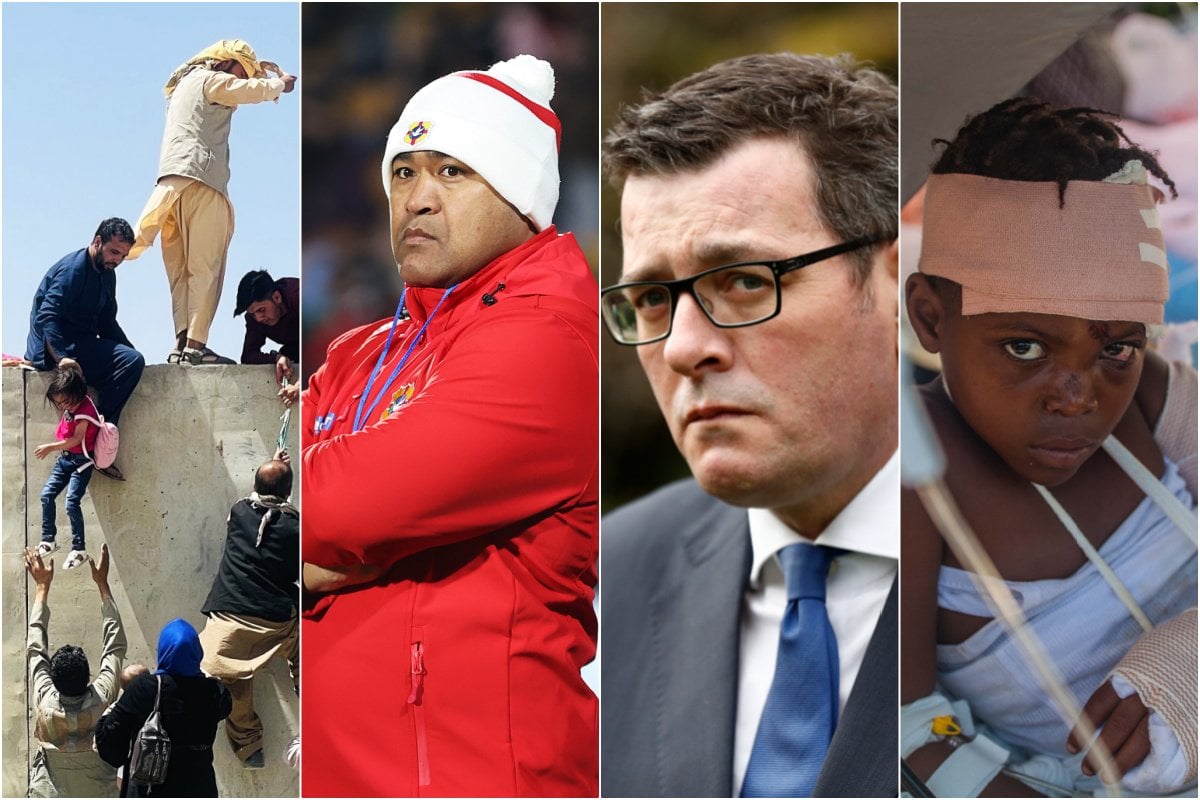 More than 250 Australian defence personnel will be deployed to Afghanistan to support the government's effort to evacuate citizens and visa holders.

A KC-30A refuelling aircraft left the RAAF's Amberley base on Monday for Australia's main operating base in the Middle East in support of the wider US-led operation later this week.

Two C-17A Globemasters will also depart for the Middle East later this week.

Since April, Australia has evacuated 430 Afghan employees, and their families, who assisted with the war effort over the past two decades.

The US sent about 3000 extra troops to evacuate embassy staff and others as the capital fell. The UK also said it was deploying troops to help British nationals and local translators flee.

Australia has joined dozens of countries in issuing a joint statement calling on all parties to "respect and facilitate the safe and orderly departure of foreign nationals and Afghans who wish to leave the country".

Since 2013, Australia has granted visas to 1800 people who worked with its forces out of Afghanistan.

Chris Barrie, who was chief of the defence force when Australia entered Afghanistan 20 years ago, said the "ugly truth" was the government left it too late. The retired admiral said there was not much hope for people who helped Australia and their families.

"Australia has an obligation to protect those most at risk including human rights defenders, ethnic minorities and women and children," he said.

US President Joe Biden says he was "deeply saddened" by the unfolding situation but did not regret his decision to end America's involvement.

"The truth is, this did unfold more quickly than we anticipated," he said, before adding, "Afghanistan's political leaders gave up quickly and left the country. The military collapsed, sometimes without trying to fight. American troops cannot and should not be fighting in a war and dying in a way that Afghan forces are not willing to fight for themselves."

The events we are seeing now are sadly the proof that no amount of American military force would ever deliver a stable, united, secure Afghanistan.

What is happening now could just as easily have happened five years ago — or fifteen years in the future.

At least six people have died at the chaotic Kabul airport as thousands of war-battered people tried to escape Afghanistan, fearing a Taliban reprisal a day after the insurgents captured the capital.

Two people, who had held on to a plane flying out of Kabul, fell to their death after the flight took off, as seen in viral videos recorded at the tarmac.

In a distressing video, Afghans can be seen attempting to hold onto a U.S. military plane as it takes off from Kabul airport. According to reports, at least three people died after falling from the aircraft. pic.twitter.com/WvrO0FIIyv

The videos, shot on mobile phones, show the stowaways fall off as the plane gains height, with people shouting and screaming in shock.

"Thousands of people, including women and children, spent their night inside the Kabul airport. The situation got chaotic after a shootout broke out between the Taliban and US soldiers," Mirwais Yusufi, an eyewitness, said.

"I saw three civilians and a Taliban fighter killed in the shootout." 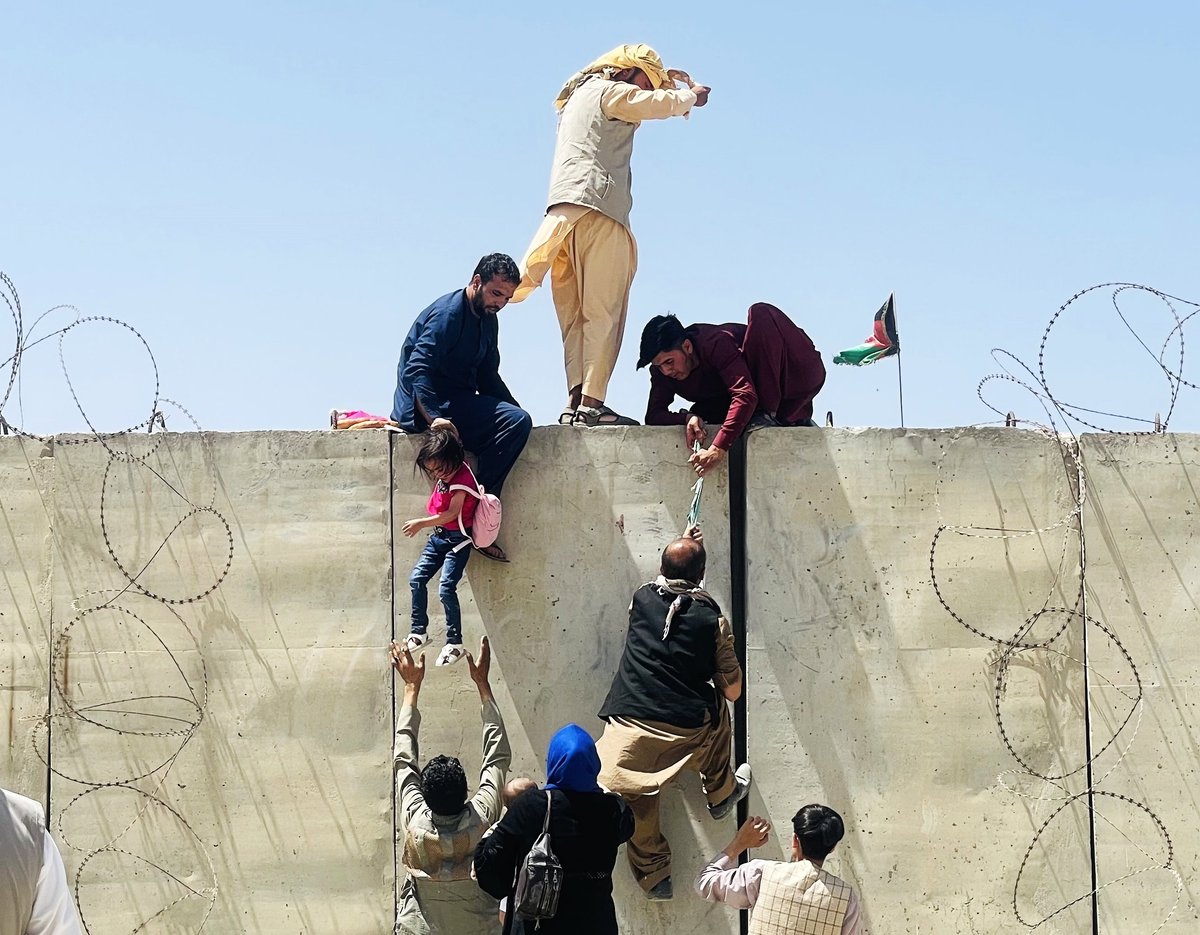 Thousands of Afghans rush to the Hamid Karzai International Airport as they try to flee the Afghan capital of Kabul. Image: Haroon Sabawoon/Anadolu Agency via Getty.

The Taliban have said they want to form an "inclusive, Islamic government" with other factions and have been holding meetings with leaders in the former government. They've pledged to enforce Islamic law but say they will provide a secure environment for the return of normal life after decades of war.

However there are grave fears the Taliban's rule will be violent and oppressive as it was before the US-led invasion. There's already evidence of provinces being asked to provide lists of young women in the area to be "married" off to Taliban fighters, which The Conversation reports is sexual enslavement under the guise of marriage.

Read more about what the Taliban takeover means for the women of Afghanistan here.

Melburnians are waking up under stricter lockdown measures including a reimposed curfew and the closure of playgrounds, as health authorities fight to control the city's worsening coronavirus outbreak.

People living in Melbourne are required to stay at home between 9pm and 5am after Victorian Premier Daniel Andrews announced a night curfew which came into effect at 11.59pm on Monday.

The city's lockdown has been extended for another two weeks until September 2, with playgrounds and skate parks closed, exercise limited to two people and authorised workers required to carry permits.

On the advice of the Chief Health Officer, we will introduce additional measures to stop the spread of coronavirus in Victoria. pic.twitter.com/iCo6gzKFEs

Additionally, large-scale construction will be restricted to 25 per cent of staff and people will not be allowed to remove their masks to drink alcohol in public.

Mr Andrews said there was "no choice" but to toughen restrictions given increasing mystery infections, the number of children infected and several illegal gatherings at the weekend.

Chief Health Officer Brett Sutton said "we are right on the cliff edge here" as he warned a "grumbling" number of daily cases could end up being 100 in a fortnight, or thousands in a month.

Residents in Greater Darwin and the town of Katherine are starting their first full day in COVID-19 lockdown amid fears of a Delta outbreak.

About 150,000 people were plunged into a 72-hour lockdown at midday on Monday after an infected US traveller spent four days in the community.

The man in his 30s travelled to Darwin for work on Thursday after quarantining for 14 days in a Sydney hotel.

What you need to know about the COVID lockdown rules in Greater Darwin and Katherine https://t.co/IhaywK4zQP

NT Chief Minister Michael Gunner said the man had been cooperating with authorities but refused to say if he was vaccinated.

Residents were given 90 minutes' notice of the three-day lockdown, which is scheduled to end Thursday.

Numerous exposure sites have been listed, including Outback Steaks and Curry in Darwin and Knotts Crossing Resort in Katherine.

NSW recorded 478 new local cases in the 24 hours to 8pm on Sunday, at least 91 of which were out while infectious.

Eight deaths were also recorded, including 15-year-old Osama Suduh - the youngest person in Australia to die with the virus.

The teenager from southwest Sydney died after contracting pneumococcal meningitis, and while he was also COVID-positive, it was not the reason for his hospitalisation or death.

Police are using portable security cameras at Sydney's most famous beach, as part of a city-wide lockdown blitz. #9Today pic.twitter.com/tu0c7TgV7D

NSW Police has been granted additional powers to enforce lockdown rules, including beefed-up fines of up to $5000 and portable security cameras at beaches like Bondi.

Queensland is about to start locking out essential workers from NSW, with new sewage tests suggesting COVID-19 remains on the state's doorstep.

Queensland Premier Annastacia Palaszczuk announced a second consecutive donut day for Queensland on Monday. But COVID-19 fragments had been found in sewage at Ballina and Lennox Head, just an hour's drive from the border.

Queensland will introduce a ‘no jab, no entry’ directive at the border this week.
There were no new cases in Queensland today and it’s been 10 days since a locally acquired infection outside of isolation. | @Chris_Campey pic.twitter.com/Xr4REWgBeP

Police are already stopping and checking every vehicle trying to enter Queensland.

From Friday, even essential staff who live in NSW but work in Queensland will be turned around unless they can show they've had at least one dose of a vaccine.

Chief Health Officer Jeannette Young said the deadline shouldn't affect too many people because shots have been offered to the likes of health workers and emergency services staff since February.

A 15-year-old has been charged with attempted murder after Australian rugby great Toutai Kefu was stabbed in the stomach in his Brisbane home while disturbing a burglary.

The former Wallabies player was left in a critical condition while trying to defend his family on Monday morning, police say, and is now at Brisbane's Princess Alexandra Hospital.

Queensland Police say three juveniles were involved in the incident.

One of the boys, a 15-year-old from Goodna, was on Monday night charged with attempted murder, assault causing grievous bodily harm, break and enter and other offences.

Former Wallaby Toutai Kefu is in a serious condition following an attack in his family home.

Our thoughts are going out to the Kefu family right now. ❤️#9News #9WWOS #Rugby pic.twitter.com/7ggpvNPNoj

Another 15-year-old boy remains in custody, while the third juvenile fled the home in Coorparoo and is yet to be apprehended.

"That person was accosted by at least one of the offenders in the premises and threatened to be stabbed if they didn't hand over vehicle keys," Det Supt Fleming told reporters.

Police say Kefu suffered "very serious wounds" to his abdomen. A man in his 20s also suffered abdominal and back lacerations, a woman in her 40s injured her arm and a teen girl injured her hand.

The death toll from a devastating earthquake in Haiti has soared to 1297 as neighbouring countries rush to send aid and rescuers scramble to find survivors buried beneath the rubble before a tropical storm hits.

The 7.2 magnitude quake on Saturday destroyed thousands of homes and buildings in a Caribbean nation which is still clawing its way back from another major tremor 11 years ago and is reeling from the assassination of its president last month.

BREAKING: The death toll from a magnitude 7.2 earthquake in Haiti soared to at least 1,297, as rescuers raced to find survivors amid the rubble ahead of a potential deluge from an approaching tropical storm. https://t.co/mtt6rcMtsP

Churches, hotels, hospitals and schools were badly damaged or destroyed, while the walls of a prison were ripped open.

The rescue and aid efforts will be complicated by Tropical Storm Grace, which is expected to lash Haiti with heavy rainfall imminently.

Access to the worst-hit areas was complicated by a deterioration in law and order that has left key access roads in parts of Haiti in the hands of gangs.

The Paralympic Games will be held without spectators as Tokyo continues to report an alarming increase in coronavirus infections.

Tokyo 2020 President Seiko Hashimoto apologised for the move, calling on people to watch the Games at home and avoid attending road events.

Tokyo Paralympics 2020: No fans allowed in stadiums due to surge in COVID-19 cases https://t.co/uv8llVOQEV

An exception will be made for school children as part of an education programme who could be allowed to attend venues if local school authorities, in discussion with parents, wish.

The Paralympic Games will see around 4400 athletes from 160 nations compete in Tokyo from August 24 to September 5.

- Zakia Khudadadi would have been the first woman to represent Afghanistan at a Paralympic Games this month but had been forced to pull out as the Taliban takeover her country.

- A wildfire caused by a burning car is threatening the homes of 1000 people in central Spain who have been forced to evacuate.