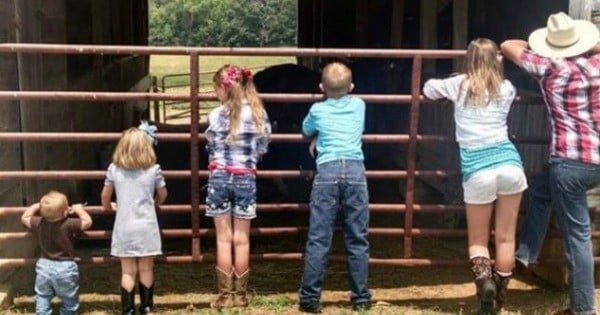 Beth Laitkep and Stephanie Culley were best friends for years. They’d supported each other through pregnancies, the births of nine kids (between them), and Laitkep’s terminal breast cancer diagnosis in 2014.

After battling the illness for two years, Beth, a 39-year-old single mother of six, decided to stop treatment. As she was dying, she asked Stephanie a big question: would her friend take in her six children once she was gone?

“She was in her hospital bed and she said, ‘Can you do this? I know you will, but can you do this? Can you handle raising nine kids?'” Stephanie tells Us Weekly.

It wasn’t an easy decision, but with the children’s fathers out of the picture, Stephanie was the closest thing to family they had.

“I knew that we were their only option other than foster care and I just couldn’t bear that,” she says. “Me being a mother, I couldn’t fathom letting her die not knowing if her kids would be loved.”

On May 19th this year, Beth died knowing her children would be taken in by the Culleys and raised alongside their own three kids.

And just a week ago the Culleys were granted permanent custody of all six of Laitkep's children.

"As soon as we came out [of the courtroom] and locked eyes, Will ran over and gave my husband a huge bear hug. Selena about knocked me over. She ran straight into my arms and started crying her eyeballs out. We’re so relieved. Those babies have been so worried that they were going to get taken."

It's an incredible story, and it makes you wonder if you could do the same. Culley's been called a hero, but says she did what she knew she had to.

“I think anybody would have done what I did."

A GoFundMe page has been set up for the family and has already raised $75,000. Click here to donate.

An expert shows us how to check for breast cancer.

What a burden to impose on your best friend. - but yes. What a generous warm hearted couple.

What else do you do though? Let them go into the foster care system?

Not one of the biological father could step in? Not even one?

I read a comment on the GoFundMe page -
"I personally know them & the father of the 4 oldest hasn't been in their lives in YEARS.....the father of the youngest 2 just up & left because Beth was sick with cancer again & HE couldn't deal with it.....copped out completely. So, there's your answers...."

If I were one of her family members, I'd be chasing the fathers down until they either paid up child support or looked after their children.

The last thing those kids would have needed was to be separated once their Mum died, and to go to men that clearly hadn't given two shits for them would be tragic. What a wonderful friend she had. XX