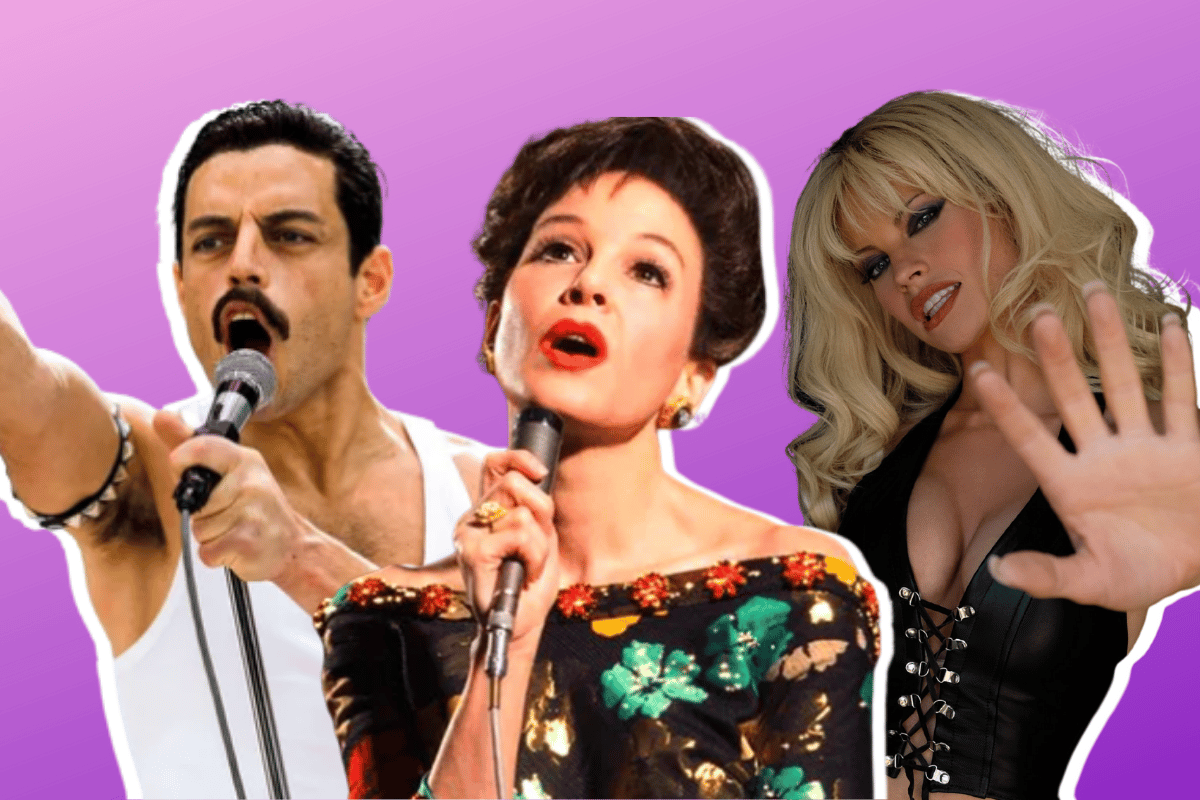 Whether it's a limited TV series of big blockbuster film, any acting role comes with its challenges.

But playing a real-life person (and particularly a famous one at that) can make things a bit more difficult for actors.

Not only do they have to do all the research and learn lines, but they also have have to master the way the person looks, walks, talks and in some cases even sings.

It's something Lily James and Sebastian Stan, surely know all too well as they prepare to play Pamela Anderson and Tommy Lee in the upcoming Hulu series Pam and Tommy.

The network released two photos of the actors over the weekend. And it's fair to say, the internet is low-key loosing its minds over the eery resemblance.

Here’s a peek at Pam & Tommy, coming to @Hulu. Based on the true scandal that started it all, featuring Lily James, Sebastian Stan and @SethRogen… ready to rewind? #PamAndTommy pic.twitter.com/4ctdKYEm9F

Lily James as Pam Anderson is more perfect than I could have realized (also Sebastian Stan as Tommy Lee is a big yes for me) pic.twitter.com/VTfTZOoZV7

Me trying to see Lily James under all of her Pamela Anderson makeup. It’s just freaking crazy. #PamAndTommy pic.twitter.com/hKhO2mQHcc

I mean, give the makeup artist who turned Lily James into Pamela Anderson an Emmy already pic.twitter.com/cHqerqFTEC

But James and Stan aren't the only actors who have shocked fans with their look-a-like roles.

Here are seven other actors who look exactly like their real-life counterpart. 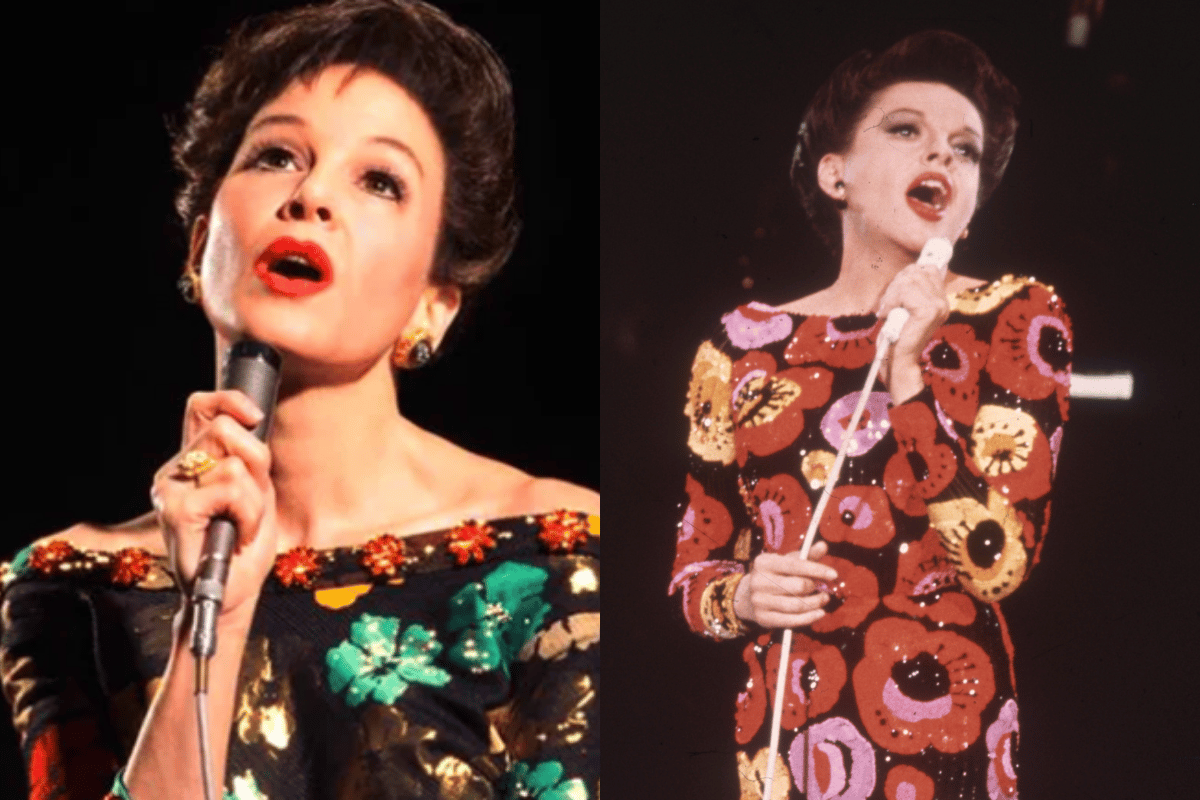 Renée Zellweger looked so much like Judy Garland in the 2019 film Judy, that even she didn't believe it was her under the wig.

"Judy’s features and her defining physical characteristics were instantly recognizable. It felt like it wasn’t me underneath the wig and makeup," she told Vanity Fair.

"Every day it was denial. I couldn’t believe it was me."

To get the features just right, Zellweger had to wear brown contact lenses, a prosthetic nose, had her eyebrows reshaped and wore dental retainers to match Garland’s teeth and jaw line.

"Renée had a set of teeth that she could rehearse with," Jeremy Woodhead, the film's makeup and hair designer told The Hollywood Reporter.

"She spent several weeks with these teeth and by the time we came to film, she was completely used to wearing them, so it didn’t impede her."

A shading makeup technique was also used to give the actress the appearance of Judy’s cheekbones.

"Most of the shading was trying to age Renée’s beautiful, flawless face into [Garland’s] more ravaged look...There’s lots of shading around the jawline to suggest that her face has dropped somewhat, and [we added] eye bags and creasing around the eyes."

Emma Corrin and Princess Diana are basically the exact same person. And we will not hear otherwise.

Fans of The Crown will agree that the British actress had a striking resemble to the late Princess when she starred in season four of the show.

Even he co-star Josh O'Connor agrees.

"When I first met her, I walked into a room where they were casting Camilla, and Emma Corrin was there to read [scenes as] Diana before they were even thinking about Diana. I was like, 'I don't know who this girl is, but she literally is Diana'," he told Glamour. 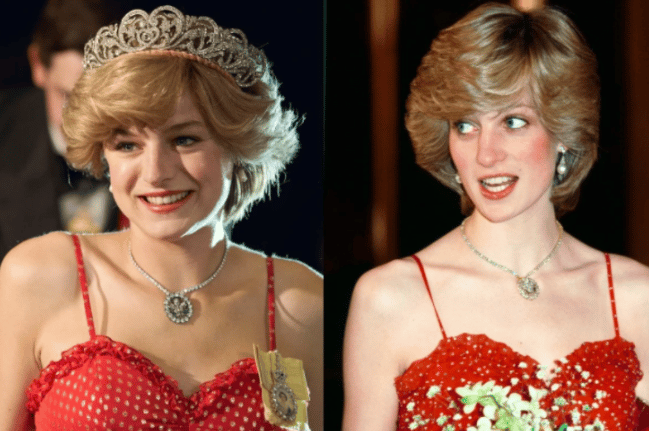 To prepare for the role, Corrin watched the same documentry over and over again.

"I only watched the documentary 'Diana: In Her Own Words'... I didn’t watch another documentary. I don’t think I would have got the part without it. Honestly. I watched it before I did any audition."

"It’s a phenomenal thing, and honestly, for research purposes, you don’t need much more, because it is her, talking about her life, overlaid with footage. It’s everything."

She also had to learn to master Diana's signature voice.

"She has a downwards inflection on the end of her sentences or words. I got the voice mainly through watching 'Diana: In Her Own Words' on repeat. My mum’s a speech therapist, and that helped initially. I also worked with an amazing dialect coach, William Conacher. He’s just brilliant and really helped me refine it."

Rami Malek won an Academy Award, a Golden Globe and a SAG Award when he played Queen frontman Freddie Mercury in Bohemian Rhapsody.

To play the role, Malek had to wear wigs, a prosthetic nose, mustaches and prosthetic teeth.

"The teeth were difficult to get used to in the beginning. Initially, I put them in my mouth a year prior to shooting and I immediately felt insecure. I felt like I was on my back foot, in a way. I didn't feel like myself," he said during an interview with Fresh Air. 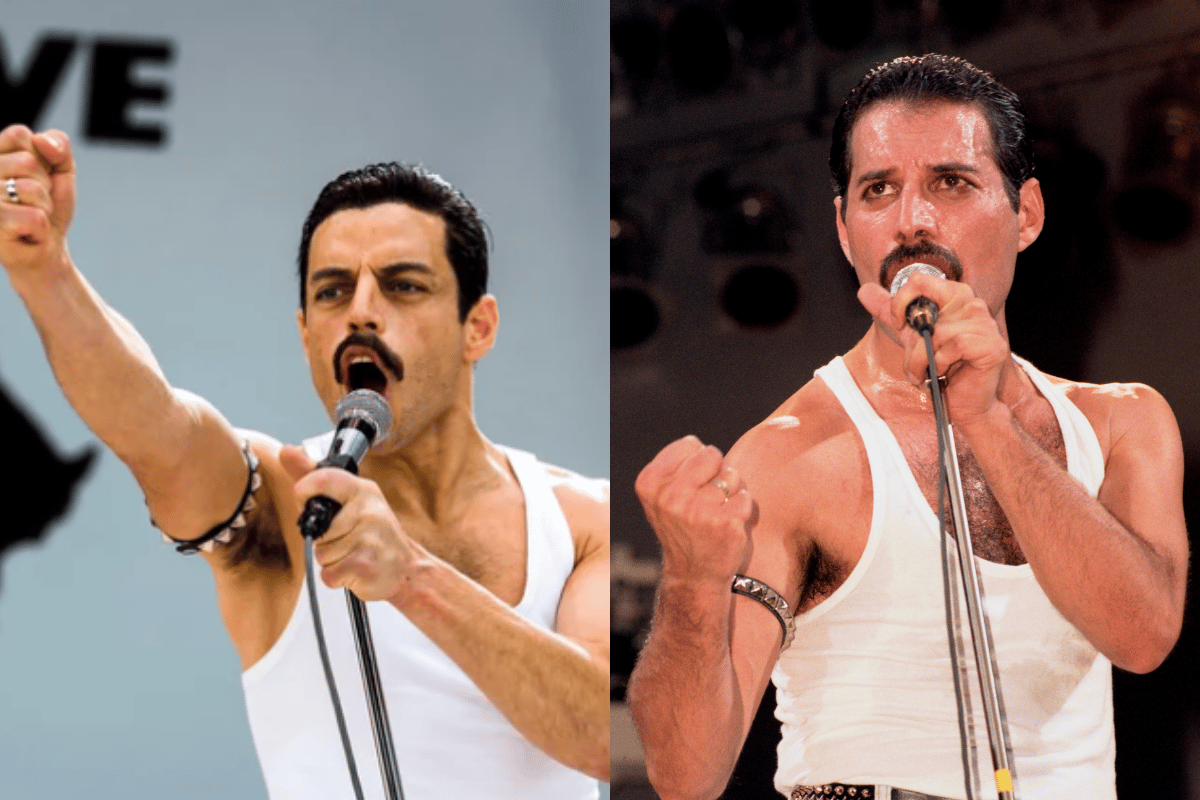 "It was a feeling of insecurity that I had to cover them up as well. I had been watching so much footage of him. You see him covering up his teeth so often that I thought, 'How am I ever going to do that?' Well, as soon as those teeth went in, it was second nature. I found myself covering them up so often. My lips would dry up, so I found myself licking my lips as he did."

However, looking like Mercury was only one part of the challenge. Malek also needed to sound like him.

But considering everyone - including Malek- knows "no one can sing like Freddie Mercury", the audio engineers had to mix together the pair's voices.

"It's actually an amalgamation. The large majority is Freddie Mercury. I went out every day and sang at the top of my lungs, because that's the only way to match what he's doing. He's giving everything 110 per cent, always."

But for the Dr Who actor, being told he looks like the 'Muswell Hill Murderer' wasn't something new.

"It’s always the kind of thing that people would point out," he told Radio Times last year.

"Maybe that was one of the reasons why I thought, 'Maybe there’s a story to tell'." 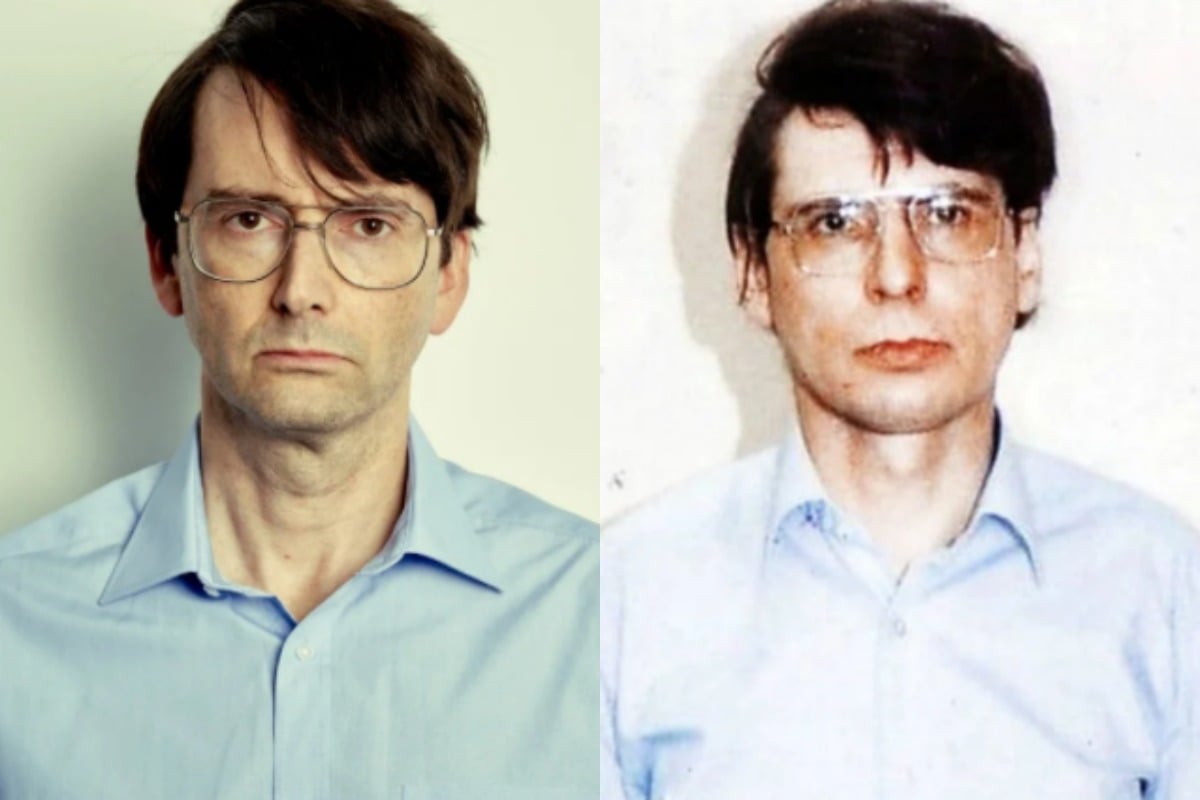 To prepare for the role, Tennant told The Guardian he watched documentaries and footage of Nilsen.

"[Nilsen] wrote a very extensive self-indulgent autobiography, which I read some of, as well as rereading Masters’s book and looking at billions of articles."

However, there was more to his research than just trying to "replicate the way [Nilsen] talked or the way he moved".

"It’s not just about impersonating a character. It’s about trying to get some sort of sense of him, not to relate to why he did what he did but to try to understand it. And it’s particularly hard with Nilsen because he’s someone who has written a lot about himself – but it doesn’t all tally up, so you have to find a space where all the things he said and all the things that other people have said about him can be true."

Aussie actor Damon Herriman looks so much Charles Manson that he played him not once but twice in 2019.

The 50-year-old played the cult leader in Quentin Tarantino’s film Once Upon a Time in Hollywood before reprising the role in the second season Netflix’s Mindhunter, where he played an older version of him. 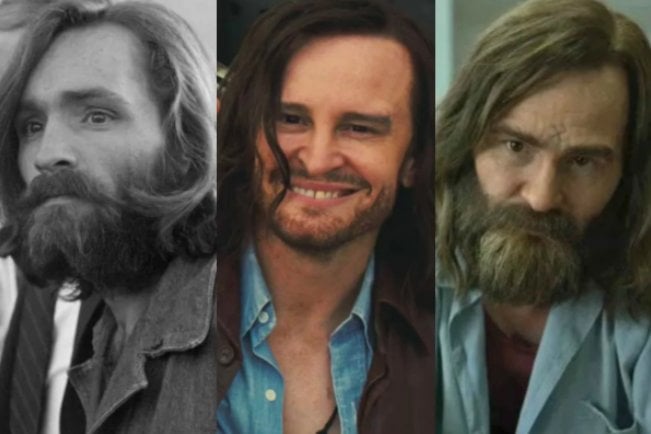 To prepare for the roles, the actor spent a lot of time researching the look and "sounds" of Manson, whose followers carried out several murders in the late 1960s.

"I watched every feature version I could find, every documentary, every interview several times, read a couple of books, listened to some podcasts. I was trying to get as much information as possible, mostly just trying to soak in the visuals and the sounds of the guy," he told Vulture last year.

After the two performances, the actor said he's understandably ready to move on from playing Mansion.

"I think twice is quite enough," he told Variety.

Ashton Kutcher made headlines for his striking similarities to Steve Jobs when he played the co-founder of Apple Computers in the 2013 biopic, Jobs.

To get into character, Kutcher started by watching documentaries and interviews of him, studying everything down to the smallest detail. 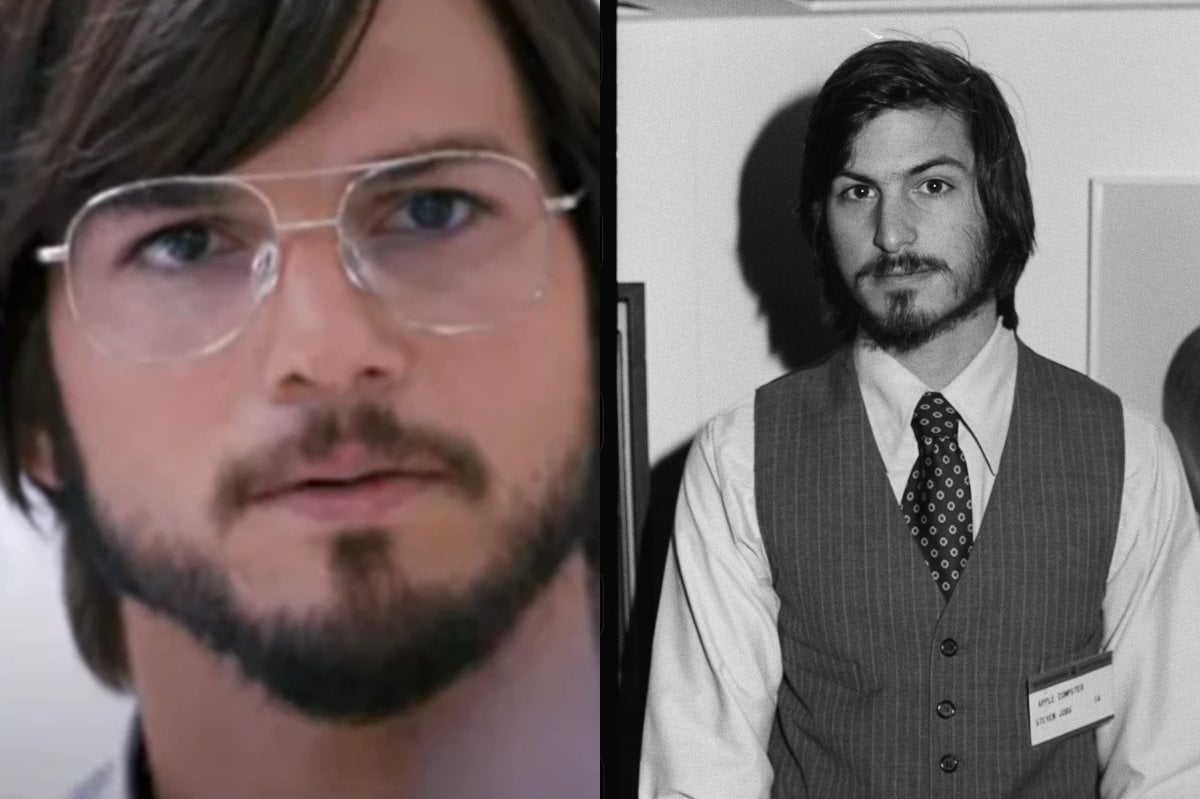 "I then started to dissect the nuances of his behavior, the walk, the fact that he has an almost imperceptible lisp, his accent that was a combination of northern California and Wisconsin, the way he paused before answer, and nodded in understanding, the way he bowed in namaste when receiving praise, and stared with contempt when in conflict," the actor wrote on Quora.

"I noticed how he used his hands to talk and how he counted with his fingers (pinky finger first), how he used the word 'aaaaand' and 'noooow' to think about what he was going to say next. But I quickly found that, while learning 'how a person is' ultimately is the key, you have to learn 'why a person is'."

Kutcher got so into character that he also decided to follow Job's fruitarian diet by only eating fruit. However, it ended up landing him in hospital.

"First of all, the fruitarian diet can lead to, like, severe issues," Kutcher later told USA Today. "I went to the hospital like two days before we started shooting the movie. I was like doubled over in pain. My pancreas levels were completely out of whack. It was really terrifying… considering everything."

Dawson’s Creek actress Michelle William looked like the spitting image of Marilyn Monroe in 2011 film My Week with Marilyn.

To get into character, Williams worked with a choreographer to master Monroe's walk and tired to gain weight, which didn't end up working out.

"Unfortunately, it went right to my face," Williams, who had to use foam padding, told Vogue. "So at some point it became a question of, Do I want my face to look like Marilyn Monroe’s or my hips?" 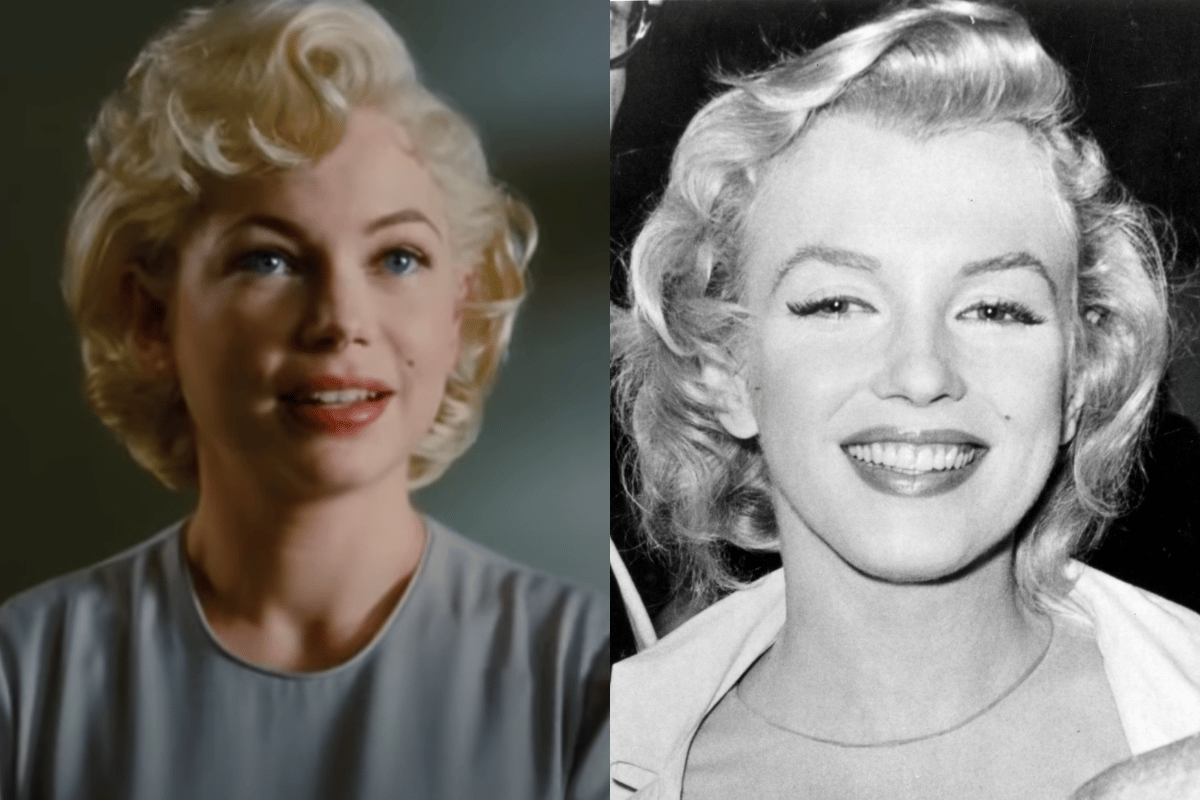 "It felt like breaking my body and remaking it in her image, learning how she walked and talked and held her head. None of that existed in my physical memory, and I knew I needed as much time as possible to make it part of me."

The actress also studied the changes to Monroe's movements throughout her career.

"In her early work, her face doesn’t have the same kind of agility that it does in her more famous roles. Early on, she hasn’t mastered how she positions her mouth or raises her eyebrows but you see it gestate over time," she told Deadline.

"Her voice is much lower, the sexy husky thing is in a lower register and it became breathier and higher as she developed her persona. So I could actually see it being built and follow her steps. It gave me courage: This didn’t come naturally to her, so I didn’t have to expect it to come naturally to myself."

Have you come across any other actors that look exactly like their real-life characters? Let us know in the comments below.

Reply
Upvote
2 upvotes
I think that with even, pretty features, many an actress could hide behind huge false eyelashes and dyed blonde hair to look like Pamela Andersen.
Artful makeup accounts for much of the match in the others, with the exception of Damon Herriman, whose eyeset really matches Manson.
Kutcher is also a much glowed up version of Jobs, but perhaps less reliant on make up than some of the others.