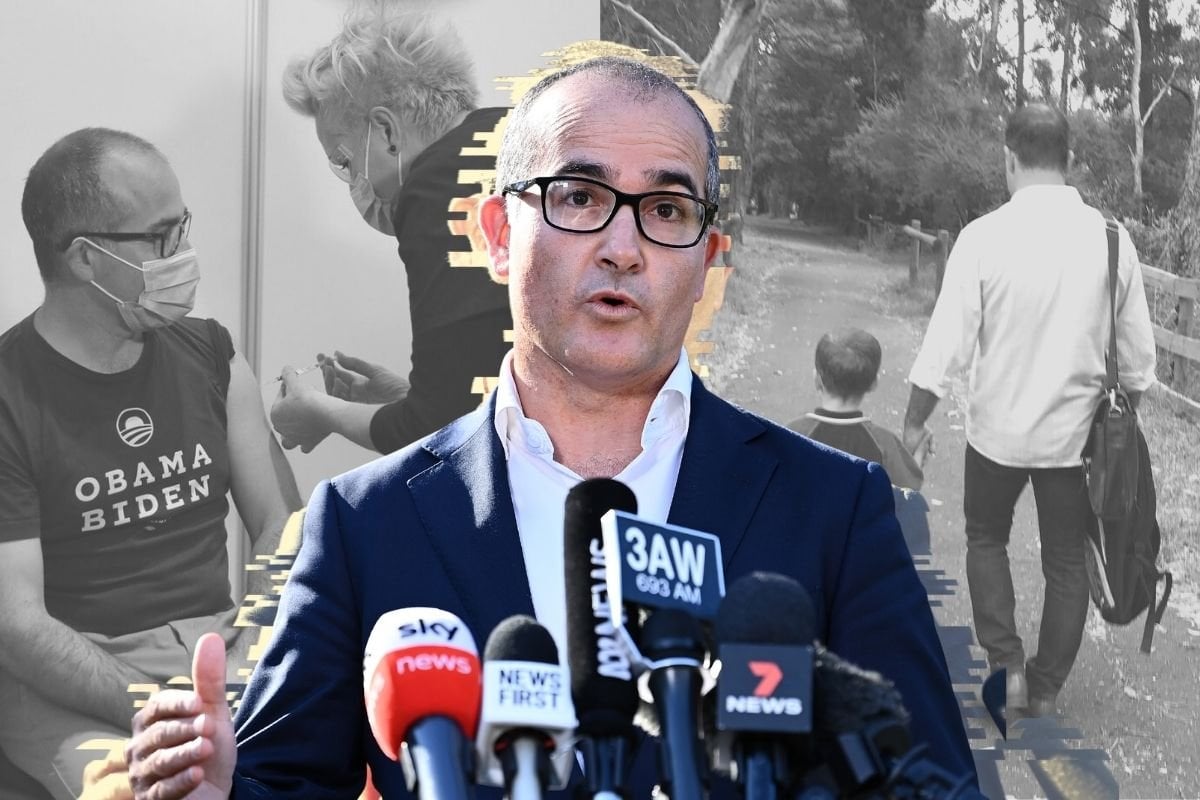 In 2020, Australians got to know their state premiers and chief ministers in a whole new way.

Every morning, we'd wait for our state or territories' morning COVID update, and cling to the words of our respective premiers as they read out our fate for the next week.

Victoria got to know their premier more intimately than everyone else. He fronted 120 consecutive press conferences as the state rode more waves and more lockdowns than the rest of the country.

But in March Daniel Andrews had a fall and broke several ribs and his vertebra. So his deputy, James Merlino, stepped up to the top job.

As Victorians get used to the new face leading them through their fourth lockdown, here's everything we know about him.

Merlino, 48, lives in the foothills of the Dandenong Ranges, with his wife of 15 years Meagen and their three children, Sophie, 13, Emma, 11, and Joshua, 9.

Meagen is a teacher at a public high school in Mount Waverley.

According to his website, Merlino is a keen reader, gardener, owner of two adopted greyhounds, Max and Sara, and a devout Catholic.

The Age reports, just prior to Andrews' fall, Merlino was considering walking away from politics to spend more time with his kids.

Born to Italian migrants in 1972, Merlino spent his final years at school and university bricklaying for his dad before putting his political science degree to use.

Merlino started off as a councillor for the Yarra Ranges, and Deputy Mayor, before being elected to Parliament as a Member of the Legislative Assembly for Monbulk in 2002 at the age of 30.

"At 21 I knew that the Labor movement was to be my life's work and I joined the party," he told the Victorian Parliament in 2003, citing former Prime Minister Paul Keating as his "hero."

Recently, he announced the elevation of the teaching of consent in Victorian state schools. From April 2021, specific classes were made mandatory to address the deficiencies in education programs in light of a national reckoning against sexual assault. Merlino has since called for a nationwide rollout of the program.

Respectful Relationships is nation leading and goes directly to the issue of consent.

But students tell us they want and need more. This is why we will mandate consent lessons in our schools.
https://t.co/1oqOv4mkkD

In 2020, he led the state through the ups and downs of remote learning in a pandemic, asking for patience from parents as they ironed out the kinks.

"I’ve got three kids, two in primary school, one in high school and I am as apprehensive as any parent, any teacher," he told The Age in April last year.

2020 has been a very tough year for our schools, students and their families. But I could not be prouder of how they have all responded.

In terms of his most recent portfolio, mental health, which he took on in late 2020, Merlino has been focused on the recently released results of the Royal Commission into Victoria's Mental Health System. In February he announced a $3.8 billion overhaul of the system that included a new tax for big business to help raise necessary funds for the sector.

What his time as Victoria's Acting Premier has looked like.

In his role as Acting Premier, Merlino hasn't shied away from telling the Federal Government what he thinks.

While he's followed a similar path to Daniel Andrews in terms of COVID response, this time around the Commonwealth hasn't been quite so generous with its coffers.

After announcing the first week of lockdown, Merlino gave a scathing press conference telling reporters he was "beyond disappointed" the prime minister had decided not to financially support Victoria, labelling it "disgraceful."

Merlino's also been vocal of his belief that the Federal Government's sluggish vaccine rollout and slow uptake of more robust quarantine facilities, is to blame for Victoria's most recent outbreak.

James Merlino not mincing words when it comes to the vaccine rollout.

"We should be at a much higher level, in terms of the number of people vaccinated than today. These are supply issues the Commonwealth is responsible for..."

In announcing an extension of the Melbourne lockdown on Wednesday, he implored: “If we let this thing run its course, it will explode. We’ve got to run this to the ground because if we don’t, people will die."

From his sickbed, Andrews has thanked Merlino for his leadership.

And on a personal note, I'm sorry I can't be there with everyone but I'm so grateful to @JamesMerlinoMP for his leadership. I have more scans and a meeting with my medical team next week. I'll let you know how that goes and exactly when I'll be back on deck later this month.

The 'fiery' nature of Merlino's attack on the government isn't new to those who've followed his career, with The Age reporting he is well known for his "hot-headedness and feisty attitude".

Euthanasia laws are "a recipe for elder abuse".

In 2017, Merlino failed in an attempt to block the state's proposed euthanasia laws, after he pulled a parliamentary move that pit him against his boss, Daniel Andrews, and much of his Cabinet.

He said: "I think this is a deeply flawed bill. This euthanasia legislation is a recipe for elder abuse."

On 29 November 2017, Victoria became the first Australian state to pass legislation allowing assisted suicide. The law gives anyone suffering a terminal illness, with less than six months to live, the right to end their life.

Merlino assured that despite the difference of opinion, there was no lingering animosity in the party.

"Yes I'm disappointed, but that's the nature of democracy and debate," he said.

A reformed opponent of same-sex marriage.

As a Catholic, Merlino was a self-confessed long-time opponent of same-sex marriage but in 2016 as Australia debated marriage equality, he revealed that he'd had a change of heart.

In a candid interview with The Sunday Age, he attributed his newfound perspective to fatherhood.

"They grow up so fast. In the blink of an eye they'll be teenagers. In two blinks they'll be young adults and it has meant, particularly over the last couple of years, I've been thinking long and hard about this issue," he added.

The same year, he defied Commonwealth requests to limit Victoria's Safe Schools LGBTIQ anti-bullying program to high schools, telling the ABC, "Absolutely we can go it alone and we will if we need to. The [Federal] Government's recommendations completely undermine the Safe Schools program."

Prior to Merlino's public support for same-sex marriage, he'd been at odds with many of his Labor colleagues and it was often remarked that his views on marriage equality - which he did voice from time to time - appeared inconsistent with the party's broader view on equality.

Six years ago, Merlino experienced a revolt from within caucus to dump him as Deputy Premier because of his ties to a specific union.

It all started when Adem Somyurek was forced to resign as Small Business Minister because of the findings of a report into workplace bullying allegations.

In an extraordinary outburst following his dismissal, Somyurek claimed his downfall was part of a union revenge plot, and called for Merlino to be sacked.

Prior to politics, Merlino was the National Industrial Officer for the Shop, Distributive and Allied Employee's Union, which is the same union Somyurek had left a few months prior to his sacking.

He claimed Merlino was too closely aligned with the SDA, which was the same union that pushed the government to create two additional public holidays in Victoria months after Labor was voted into power. It was a decision that stunned business leaders, and at the time there was a lot of commentary about the 'ever-growing influence' of unions on the Victorian Labor Party.

Somyurek wasn't the only one thinking it, with one MP telling The Age, "Merlino's position is no longer sustainable, he is the source of instability and for the good of the government he must go."

But Daniel Andrews dismissed the claims, calling Merlino an "outstanding" deputy. Merlino said there was no truth to Seminyak's accusation he'd been involved in a factional stitch up, calling the comments "utter nonsense". 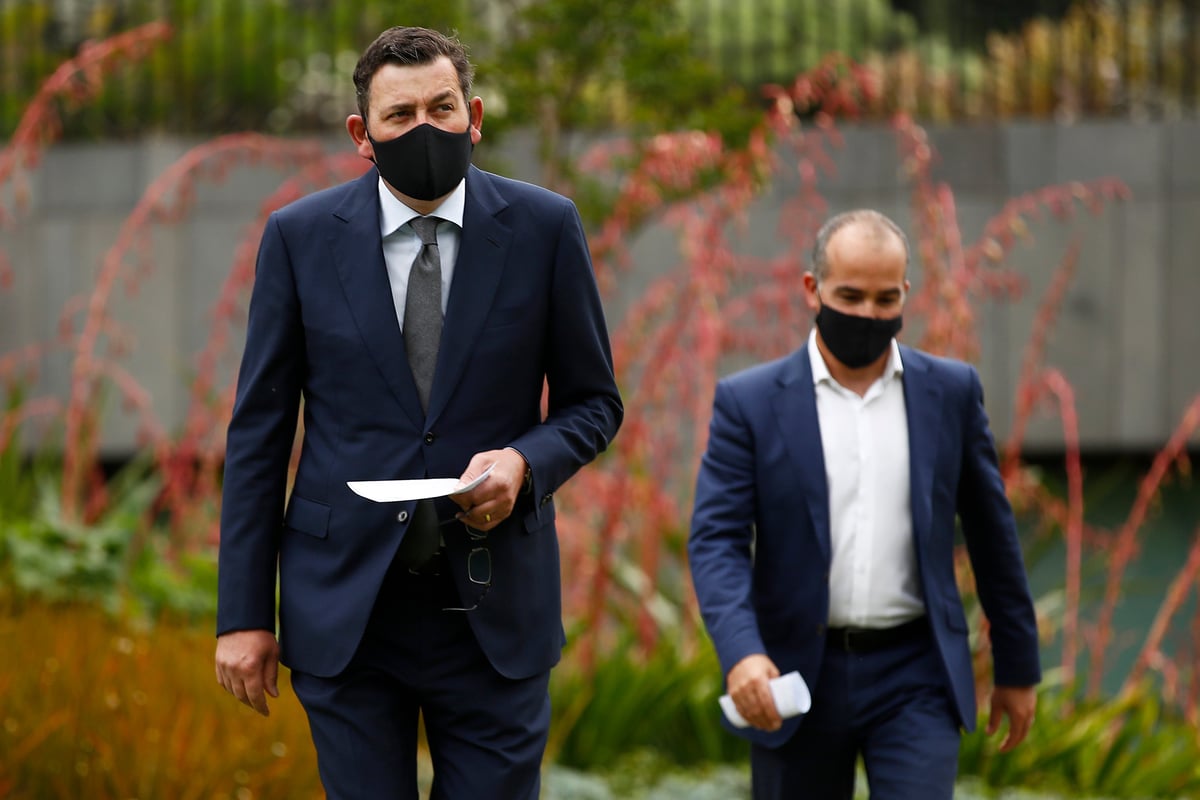 They've had very different opinions over the years, but Andrews has long supported his deputy, Merlino. Image: Getty.

He opposed a move to relax abortion laws.

Once again showing his conservative approach to social issues, Merlino vowed in 2007 to oppose any attempt to relax abortion laws in Victoria.

The state was moving to legalise abortion, a Bill that was passed in October 2008.

"The dignity of human life is not a tradeable commodity," Merlino told Parliament. "Since when did bringing about a death become socially progressive?" 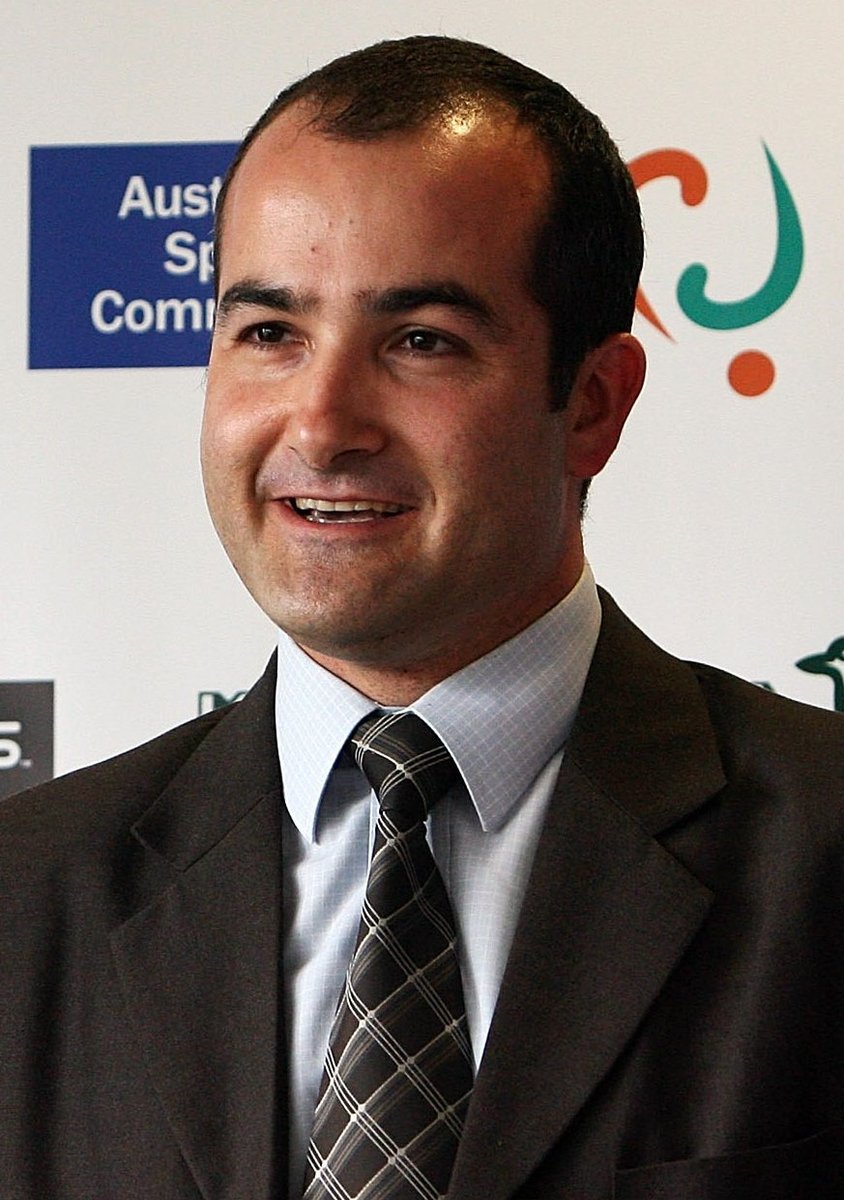 James Merlino in 2008, as Minister for Sport and Recreation. Image: Getty.

His opinion put him at odds with the then pro-choice Premier John Brumby. At the time his wife was expecting their second child, and he told Parliament how, on the day the Bill was introduced, he viewed the heartbeat of his eight-week-old child.

"The morning was joyous as I imagined life with another little human being running around. That afternoon turned to sadness as this bill was introduced," he said.

While Merlino has changed his conservative views on same-sex marriage, there is no public commentary from him to suggest he's had a similar change of heart with abortion.

Reply
Upvote
1 upvotes
Don't you just love the fairweather Catholics? Who change their 'Catholicness' depending on their needs?
As with Morrison, it shouldn't take having your own kids to change your views on basic human rights like same-sex-marriage, abortion etc.  How did someone who is clearly so Conservative end up in the Labor Ministry? Hurry back Dan.
S
sarah a year ago

Reply
Upvote
2 upvotes
Anyone is better than Andrews but Merlino needs to take responsibility and stop blaming the Federal Gov. Andrews and Merlino love to throw everyone under the bus instead of taking any responsibility for the constant problems in Victoria.
C
cat a year ago

Reply
Upvote
@sarah  No-one is better than Andrews, Melbournians miss him. It would have been great for him to get us out of 'Victoria's constant problems', the current one being a COVID outbreak caused by the failures of Adelaide (and federal) quarantine.
S
sarah a year ago

Reply
Upvote
@anonymous Are you related to Andrews?
He is not missed and I get anxiety when ever I see him or hear him.
A
anonymous a year ago