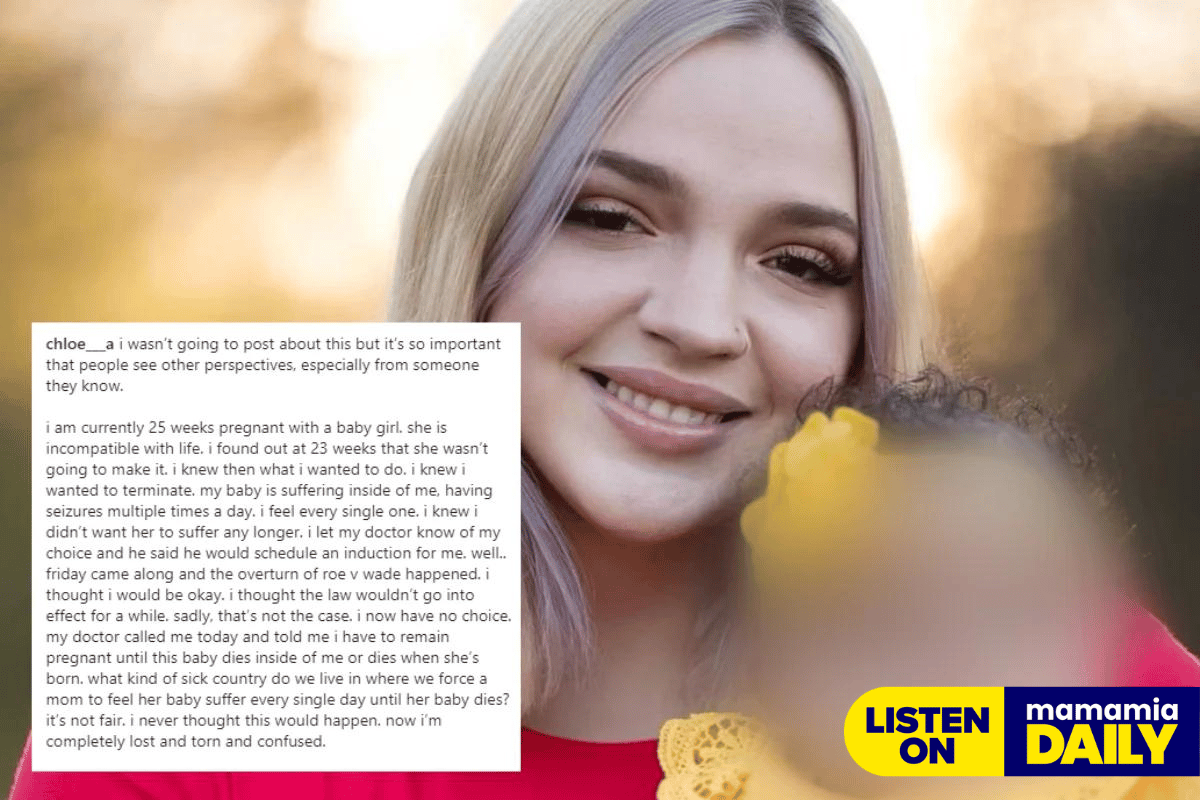 Warning: This post mentions sexual assault and miscarriage and may be triggering for some readers.

Listen to this story being read by Brielle Burns, here.

It's been one month since the US Supreme Court handed down the decision that sparked outrage all over the world.

On June 24, the court overturned the landmark 1973 Roe v. Wade ruling that recognised a woman's constitutional right to an abortion, winding back women's rights by 50 years.

Watch: US President Biden speaks after the overturning of Roe v. Wade. Post continues below.

Since then, "trigger laws" banning nearly all abortions have started taking effect in 13 US states. Restrictive abortion laws from before Roe v. Wade are also starting to be enforced in another 13 states.

Just this week, Georgia became the latest state to institute a ban on abortion after a heartbeat is detected, around six weeks of pregnancy.

In the aftermath of the Supreme Court's decision, President Joe Biden signed an executive order earlier this month, that aims to protect women's access to abortion.

The order applies to states where the procedure remains legal by heading off some potential penalties that women seeking abortion may face, but his order will not restore access to abortion in the states where total bans have come into effect.

Today, I signed an executive order to protect the reproductive rights of women in the aftermath of the Supreme Court's extreme decision to overturn Roe v. Wade.

It formalizes the actions I announced right after the decision and will add new measures to protect women's health. pic.twitter.com/EujXCMAwFR

In the meantime, anti-abortion laws have not only robbed women and girls of their rights, but have also caused confusion amongst medical professionals when it comes to providing care for miscarriages, ectopic pregnancies and other complications.

One month on, here are just some of the women (and child), whose lives have been impacted by the decision.

The 10-year-old who had to travel interstate for an abortion after being raped.

The story of a 10-year-old girl, who was forced to travel interstate for an abortion after being sexually abused, made news around the world last month.

The Indianapolis Star, an Indiana-based publication, reported the young girl was forced to travel from Ohio to Indiana to have the procedure days after Roe v. Wade was overturned.

Under Ohio's "heartbeat law", abortions are banned after the first fetal heartbeat is detected, around six weeks into the pregnancy.

Obstetrician and gynaecologist Dr Caitlin Bernard told the publication she had received a call from a "child abuse doctor" who had "a 10-year-old patient in the office who was six weeks and three days pregnant".

US President Joe Biden later addressed the story, which some had called into question, when he signed the executive order to protect access to abortion.

"A 10-year-old shouldn't be forced to give birth to a rapist's child," he said at the time. "Does anyone believe that the majority view is that should not be able to be dealt with?"

"This isn't some imagined horror… It's already happening. I can't think of anything more extreme."

A 27-year-old Ohio man has since been charged with two felony counts of rape in an indictment this week.

Ohio man indicted in rape of 10-year-old girl who traveled for abortion https://t.co/fvnH04tsLw

The mum who was refused an abortion despite being told her baby was "incompatible with life".

Over in Arizona, 21-year-old Chloe was denied an abortion after finding out her baby girl "wasn’t going to make it".

Sharing a post on Instagram last month, Chloe, who is already a mum-of-one, said she was 23 weeks pregnant when she was told her baby was "incompatible with life".

"My baby is suffering inside of me, having seizures multiple times a day. I feel every single one," she wrote in the post.

"I knew I didn’t want her to suffer any longer. I let my doctor know of my choice and he said he would schedule an induction for me."

However, by the time Chloe’s appointment came around, Roe v Wade had been overturned.

"I thought I would be OK. I thought the law wouldn’t go into effect for a while. Sadly, that’s not the case," she explained.

In Arizona, abortions are banned unless medically necessary to save a mother’s life.

"I now have no choice. My doctor called me today and told me I have to remain pregnant until this baby dies inside of me or dies when she’s born," she wrote.

After her post went viral, Chloe started a GoFundMe page to help her raise money to pay for the procedure in another state.

The woman who bled for 10 days from an incomplete miscarriage.

In Wisconsin, a woman who was having an incomplete miscarriage, was refused help by doctors after the state's ban on abortions came into effect.

According to the Washington Post, the woman, who has not been identified, was reportedly left to bleed for 10 days.

Carley Zeal, a gynecologist at Mercyhealth Cancer Centre in southern Wisconsin, told the publication, the staff from another hospital weighed up what services they could provide the woman before ultimately refusing to remove the fetal tissue from her uterus.

She later gave the woman abortion medication to expel the fetal tissue.

"It really delayed her care," she told the publication.

"I saw her a week and a half later with an ongoing miscarriage and bleeding, increasing the risk of severe bleeding as well as infections."

Reply
Upvote
They're not even acting when it is necessary to save a woman's life - the woman in Wisconsin could have died. You can't just leave dead fetal tissue in someone. They're ultimately criminalising pregnancy and health care.
C
cat a month ago

Reply
Upvote
@alessandra.z87  its horrifying. A lot of women cannot get pain medication for arthritis in particular because it can technically cause cause a miscarriage, so doctors don't know if they could be sued by a random member of the public for prescribing it.
So women with chronic illnesses just have to live in pain.
C
cat a month ago