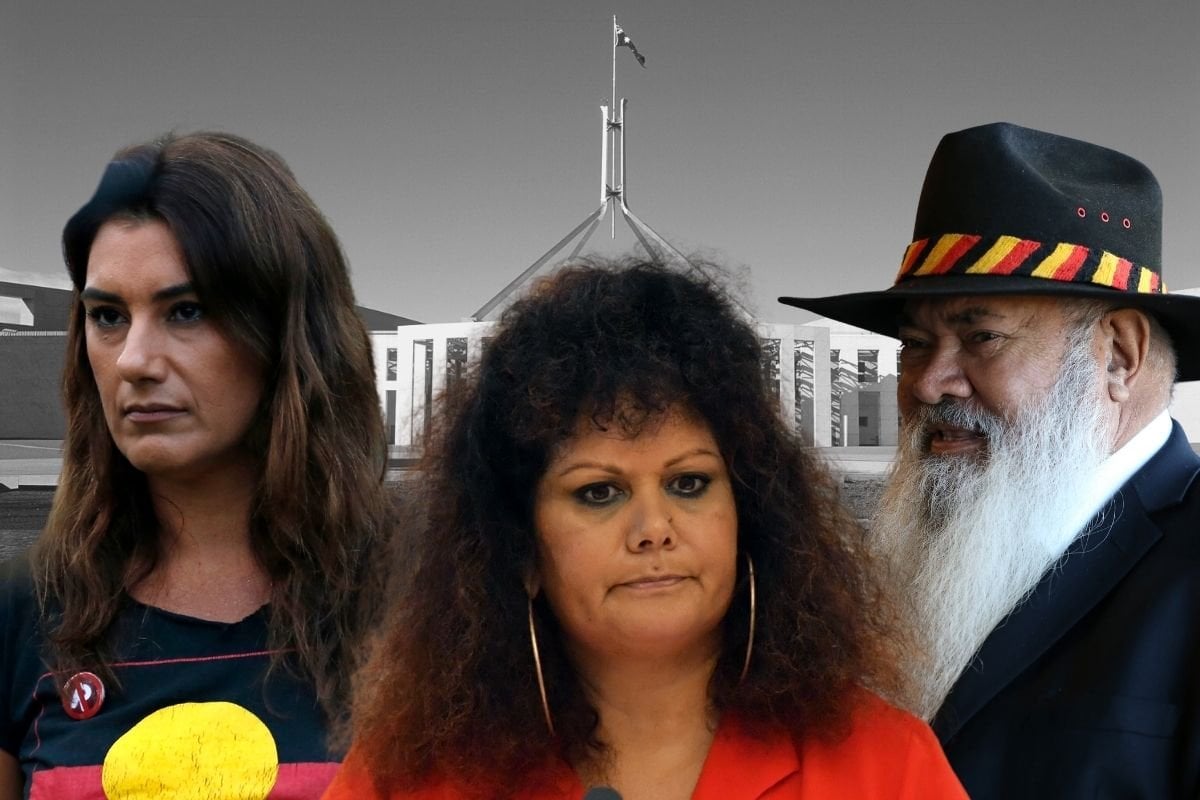 This week is NAIDOC Week, an annual celebration of the history, culture and achievements of Australia's Indigenous people.

Yet on Tuesday, the Australian Government decided that it's not "appropriate" to permanently install the Aboriginal and Torres Strait Islander flags in the Senate — the seat of Australian democracy.

Watch: Amanda Fotheringham on why she can't 'just get over' the Stolen Generation.

The motion, tabled by Indigenous Labor Party senators Malarndirri McCarthy and Pat Dodson along with the Greens' Lidia Thorpe, was voted down by the coalition, 29 votes to 28.

"Why is it in this week of NAIDOC, could the government be so mean spirited," McCarthy said in parliament.

"The government has actually had this motion before them for three months."

Defending the government's position, Liberal senator Anne Rushton said, "There are many places and circumstances to appropriately display the flags of our nation, including the Aboriginal and Torres Strait Islander flags.

"The government believes the Australian national flag, which represents all Australians, is the only appropriate flag to be flown in the Senate chamber."

The irony of this decision is that the government claims it was motivated by unity. It made a value judgement that the national flag better "represents all Australians", that it ought to be enough for everyone.

But it got it wrong.

Not a single element of the Australian flag acknowledges our country's first people or their ancient culture. In fact, it erases them entirely.

On 26 Jan 1938 at one of the first major civil rights gatherings in the world - the Day of Mourning - we asked for basic human rights. Today 82 yrs later in the week borne from that day we asked for our flags to also be flown in the Senate chamber. Just the flags..nothing else.

There's the Union Jack, a tribute to British settlers.

There's the Commonwealth star, with a point for each state and territory.

And there's the Southern Cross constellation, which can only be seen from the southern hemisphere — "a reminder of Australia’s geography", the government says.

It's been up to the Aboriginal and Torres Strait Islander flags, first flown in 1971 and 1992 respectively, to offer that recognition and serve as a symbol of pride and unity.

"So the Aboriginal flag is what we identify with, what we connect with, just as you connect with the colonial flag..."

The theme for NAIDOC Week this year is #AlwaysWasAlwaysWillBe. The Senate sits on stolen Wiradjuri/Ngambri/Ngunnawal land, and yet these Coalition Senators voted AGAINST a motion from 3 Blak Senators to permanently display our flag in the spirit of NAIDOC Week. pic.twitter.com/DK3yewwjUr

Our anthem is similarly selective about Australia's history. And NSW Premier Gladys Berejiklian has this week floated the idea of changing the line "young and free" to "one and free" in recognition of our rich pre-settlement history.

Standby for the Federal Government's take on whether that would be 'appropriate'...

Meanwhile, in the middle of NAIDOC Week — which this year has the theme 'Always Was, Always Will Be' — coalition senators have chosen not to approve their colleagues' request for a simple, yet meaningful act of acknowledgement. They've chosen not tell the full version of Australia's story in the very place where its next chapters are shaped.

Fostering unity is an admirable and urgent aim, but it cannot be achieved if our lawmakers continue to ignore the voices of our First Nations people, nor if they continue to make value judgements about the relative importance of their history and culture.

After all, the Aboriginal and Torres Strait Islander flags are recognised as official flags of our country under the Flags Act 1953. And many state and territory parliamentary chambers fly all three proudly.

Yet in the one place where all Australians are meant to be represented, the Federal Government can't bring itself to do the same.

Inappropriate doesn't even begin to cut it.

NAIDOC Week 2020 runs from the 8-15 November. For more information and details of events in your area, visit the website.