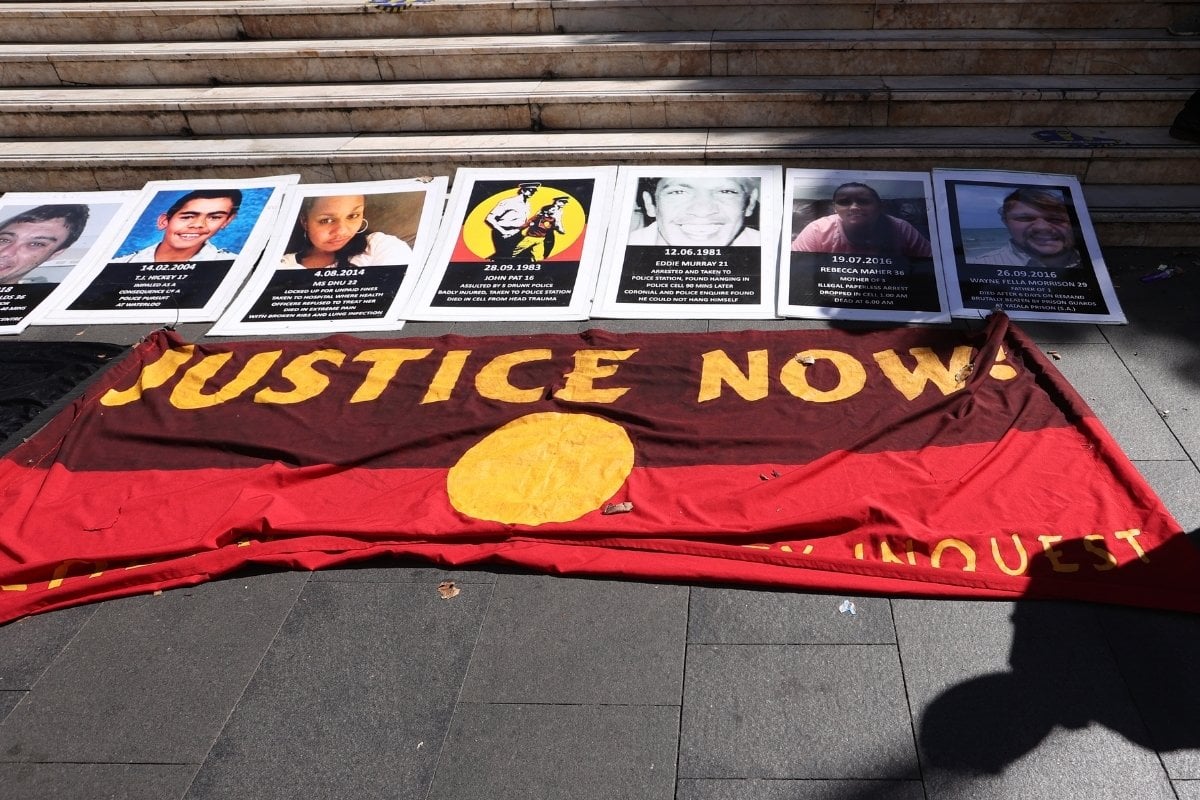 WARNING: Aboriginal and Torres Strait Islander readers are advised that the following article contains names and images of people who have died.

The following contains mention of suicide, which may be triggering for some readers.

On Saturday, thousands of people marched in rallies around Australia calling on the Federal Government to take meaningful action to prevent Indigenous people dying behind bars.

And on Thursday, April 15, many will march again.

They're doing so to mark 30 years since the Royal Commission into Aboriginal Deaths in Custody was tabled in Parliament, and because despite the lessons learned, the situation remains urgent.

Watch: Australia may be 'the lucky country'. But only for some.

Since the beginning of March, five Indigenous people have died in prison or police custody in Australia. That's five lives lost in fewer than five weeks.

On March 2, an Aboriginal man in his mid-30s died after becoming unresponsive in his cell at Long Bay prison hospital in NSW.

On March 5, an Aboriginal woman in her mid-50s died in an apparent suicide in her cell at Silverwater Women's Prison in NSW.

On March 18, a Barkindji man from NSW suffered a medical episode during a police pursuit. He was declared deceased at Broken Hill Hospital.

These tragedies have renewed questions about why rates of incarceration remain so high for Indigenous people and why, for some, being detained represents a death sentence.

Among those leading the charge is a collective of 15 Indigenous families who have lost a loved one in custody.

The group includes the family of David Dungay Jr., a Dunghutti man who died in 2015 after being restrained by five riot response officers at Sydney's Long Bay prison because he refused to stop eating a packet of crackers. And the family of Yorta Yorta woman Aunty Tanya Day, who died from brain injury in 2017 after repeatedly falling over in her cell. It was three hours after her most significant fall before police sought medical attention.

Behind the numbers are people. When someone dies in custody, their loved ones are left to carry an unimaginable burden. As we mark #RCIADIC30Years, we stand by the families who live with this pain.

"We, the families, are left with a profound void and emptiness that can’t be remedied. The spiritual and emotional unrest of knowing that our loved ones won’t be coming home is immeasurable. We live with this ongoing trauma day to day," the group said in a statement.

"Every time there is a death, we relive the loss of our loved ones, and another family must experience this never-ending pain. This system is killing our people and our future."

What the Royal Commission found.

The recent cluster of deaths is a sadly familiar situation.

The Royal Commission was established in 1987 amid palpable grief and anger over a spate of deaths of Indigenous men, women and children in custody since the start of the '80s. The youngest was 14 years old.

In its final report, the Royal Commission noted that Indigenous people were not more likely to die in custody than non-Indigenous Australians. But it found that rates of Indigenous incarceration were disproportionately high and that "glaring deficiencies existed in the standard of care" that had been afforded to those Indigenous people who'd died.

"Aboriginal people die in custody at a rate relative to their proportion of the whole population, which is totally unacceptable and which would not be tolerated if it occurred in the non-Aboriginal community," the report read.

The Royal Commission issued 339 recommendations, including that imprisonment only be a last resort, as well as greater collaboration with Indigenous communities and improved access to records. It also recommended a process of reconciliation between Aboriginal and non-Aboriginal Australians.

According to the Australian Institute of Criminology's National Deaths in Custody Program, at least 455 Indigenous people have died in custody since the Royal Commission recommendations were handed down.

The rate of death has decreased, though rates of incarceration have increased.

While Indigenous people represent 3.3 per cent of Australia's population, as of June 30, 2020, they make up 29 per cent of the prison population.

This makes Australia's Indigenous population the most incarcerated people on earth.

Listen: The Quicky examines the legacy of the Royal Commission into Aboriginal Deaths in Custody.

Back in 1991, the Royal Commission concluded "that the most significant contributing factor" to the overrepresentation of Indigenous people in the prison population "is the disadvantaged and unequal position in which Aboriginal people find themselves in the society-socially, economically and culturally".

Wiradjuri woman and federal opposition MP Linda Burney is "incredulous" that we're having the same discussion three decades on. That's just one word she used when discussing the issue with Mamamia's daily news podcast, The Quicky; "frustrating", "distressing", "infuriating" were among the others.

She says it's critical that we address what is driving the rates of Indigenous incarceration in Australia.

"Part of that is the relationship with police. And that, of course, has an enormous historical basis, particularly the issue that the police were primarily the people responsible for the removal of Aboriginal children during the Stolen Generations," she said.

This kind of social and economic disadvantage not only makes a person more likely to encounter the justice system, it means that when they do, they often have limited access to adequate legal support.

Over policing of Indigenous communities and police bias remains an issue, too. 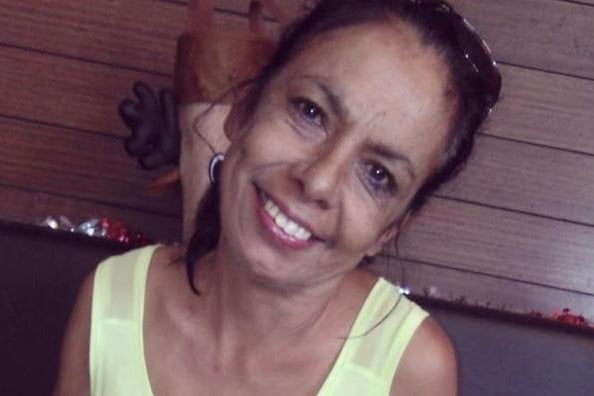 "We believe there is systemic racism in those institutions and we believe that impacted on how they dealt with Mum on that day," she previously told Mamamia. "But what was particularly painful was that people on the stand were asked 'Would you do anything differently?' And they answered 'no', knowing the outcome. How could they say that knowing someone has died?"

Finishing that job is the number-one demand of the collective of families who've lost a loved one in custody. They're calling for a raft of changes including raising the age of criminal responsibility to 14 years old nationwide, repealing punitive bail and mandatory sentencing laws, and decriminalising public drunkenness.

They're also urging the Government to prioritise community-led, grassroots solutions to tackle contributing factors like homelessness and unemployment.

30 years and 474+ of our people whose lives have been senselessly lost in custody.

To end Black deaths in custody, the demands of 15 families must be heard.

One such recommendation is justice reinvestment, which the Australian Law Reform Commission also proposed in its 2018 report into Indigenous deaths in custody. It involves the redirection of resources from the criminal justice system into local communities that have a high incidence of incarceration.

It's proven effective in the regional NSW town of Bourke.

The Maranguka Justice Reinvestment Project there was introduced in 2015 by a council of 21 tribal groups to address the underlying causes of imprisonment and provide support to vulnerable children and families. This involves 'circuit breaker' programs to improve education, housing, mental health resources, drug and alcohol services and so on.

An independent review of the project in 2018 found a reduction in days spent in custody (by 42 per cent) and charges against juvenile offenders (38 per cent), as well as an increase in Year 12 student retention rates (31 per cent).

A parallel proposal is Indigenous sentencing courts like South Australia's Nunga Court, which has been in place since 1999. It is presided over by a Magistrate who is assisted by Aboriginal Elders and/or Respected Persons, and is available to Indigenous people who have pleaded guilty to an offence.

A similar proposal called the Walama Court is on the table in NSW and has been backed by the Police Association of NSW, Law Council of Australia and the Australian Law Reform Commission.

As Wiradjuri and Wailwan woman and lawyer Teela Ried previously told Mamamia, "The Walama court is a proposal for the New South Wales Government to create a culturally appropriate court within a District Court jurisdiction to allow First Nations peoples to come before this court and tell their story in a culturally appropriate way. And where there are elders and respected persons sitting at the decision-making table."

That self-determination was embedded throughout the Royal Commission's findings 30 years ago. It emphasised the need — and the democratic right — for Indigenous people to exercise "maximum control over their own lives and that of their communities".

There is a long way to go in that regard. But it's with that vision that the families of those lost behind bars are urging the Government to meet with them, to listen, to work with them to action their demands "so that no other family has to experience the injustice of living without their loved ones".

"Our communities have had the solutions to end this injustice for 30 years but Governments have chosen not to prioritise saving Black lives," they said in their statement.