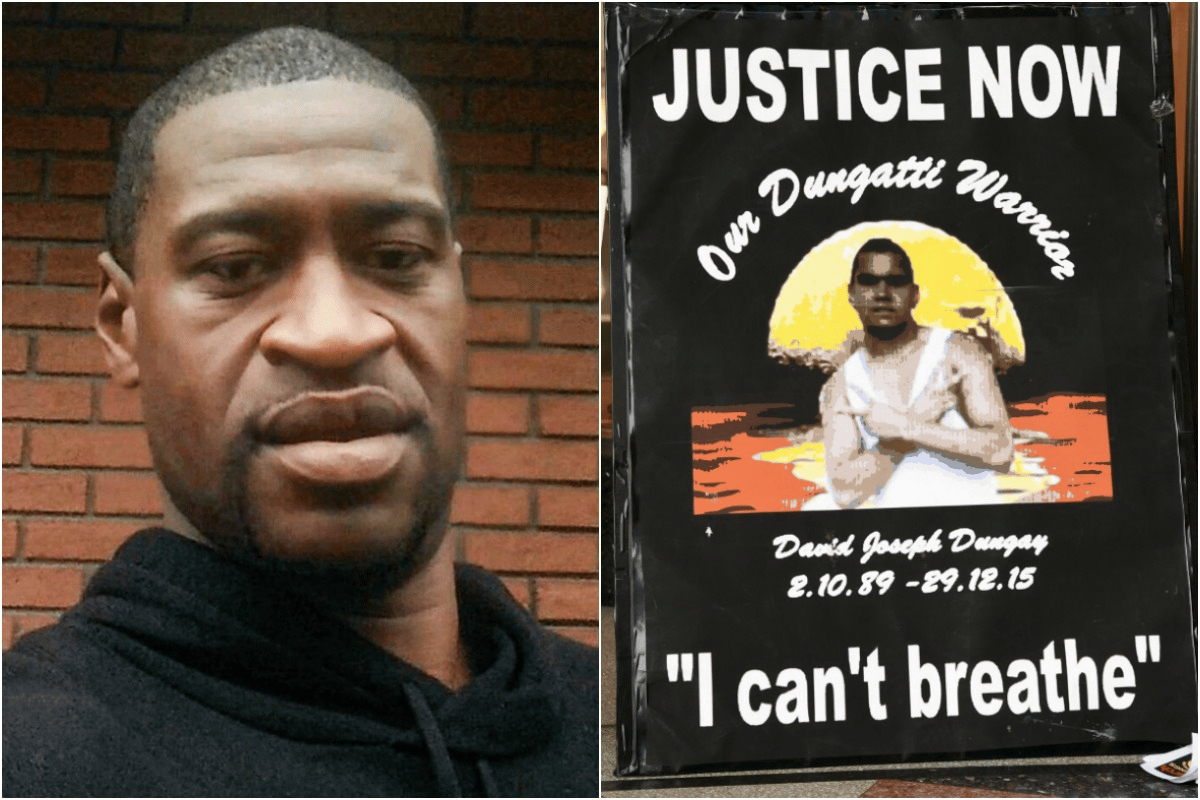 Warning: The article contains an image and the name of an Indigenous person who has died.

These were the last words said by George Floyd before his tragic death at the hands of Minneapolis police officers last week.

Aboriginal man, David Dungay, also muttered these words in his final moments before dying in police custody in 2015.

Many Australians like to believe that racism doesn’t exist in Australia although we can all acknowledge that the murder of George Floyd was racially motivated and abhorrent. We’re watching the news and seeing America fall apart, as protests seek to challenge the systemic racism and oppression faced by black people for generations, without a second thought to what is happening in our own backyard.

I think the reason why Australians fail to believe that racism is alive and well here is because it means they become responsible for change. It challenges them and makes them uncomfortable as they realise what it truly means to be an Australian.

Listen to Mamamia Out Loud. On this episode, Mia, Holly and Jessie speak to Amanda Fotheringham about the parallels that can be drawn between the US and Australia when it comes to racially motivated violence. Post continues below.

You’d think that Aboriginal and Torres Strait Islander peoples would be free of racism in their own country, and on their own land, but for hundreds of years this hasn’t been the case. This is highlighted in the statistics.

Currently, over 400 Aboriginal and Torres Strait Islander people have died in police custody since the 1991 Royal Commission into Aboriginal Deaths in Custody.

How many police officers have been held criminally responsible? Zero.

Aboriginal and Torres Strait Islander peoples make up around three per cent of Australia’s population yet represent over 27 per cent of those incarcerated. They are the most incarcerated people in the world.

READ:  'My mum was stolen from her mum. Please stop telling me to "get over it."'

What do Aboriginal and Torres Strait Islander peoples need to do in order to guarantee their safety around police? We know that saying, "I can’t breathe" isn’t enough, as shown in David Dungay’s case. If the police don’t care for our physiological needs... the very people who are supposed to protect and serve us, how are we supposed to feel?

This is why we need to challenge the systems that are in place because like the systems in America, they have been designed by the oppressor and continue to benefit white people to the detriment of Aboriginal and Torres Strait Islander peoples.

Every Australian needs to go inwards and analyse their beliefs. Challenge them. Ask yourself who or what influenced you to think the way you do.

I’m not here asking you to change everything overnight because that isn’t realistic, but if we all worked on ourselves to understand the way Australia works as a result of its colonial past, and question why Aboriginal and Torres Strait Islander peoples are dying in custody at the rates they are, we can work towards a more fair future for all Australians.

For generations, black Americans have waited and hoped for change. George Floyd’s death was the straw that broke the camel’s back. Australia is headed down the same path if we continue to see Aboriginal and Torres Strait Islander people dying in custody.

Amanda Fotheringham is a Gamilaroi woman currently studying a Bachelor of Community Services whilst working in the Diversity and Inclusion space. Amanda is passionate about sharing her family’s story so others can learn about the ongoing disadvantages faced by First Nations people. Follow her on Instagram here.

"Currently, over 400 Aboriginal and Torres Strait Islander people have died in police custody since the 1991 Royal Commission into Aboriginal Deaths in Custody.
How many police officers have been held criminally responsible? Zero."

I've seen this statement several times over the last few days.  Although this number of 400 is accurate, it's completely inaccurate to imply that all of these are due to the actions of police officers.
If you actually look into this figure, it includes medical issues, attacks in jail by other prisoners and self harm.
A
anonymous 2 years ago

Reply
Upvote
1 upvotes
@james b  Why do you always pick apart the semantics of every article and overlook the big picture, the real message? To avoid taking responsibility, is why.
If you vote politically for the side of politics that focuses on individualistic principles, rather than those of the greater good, it would really bother you to see articles like this that talk about what we could ALL be doing to prevent the suffering of minorities. Conservative voters simply can't afford to empathise with minorities as it would mean their individual interests have to be given up. I feel really sad for those that care only for themselves. They kick and scream against any news article (or fake news as they like to claim) that makes them look like the self-focused individuals that they are. They really hate their shame being exposed. They brandish holy books as subterfuge, to absolve them of their behaviour. They label all opposing views as simply weak or idealistic. They'll do anything to divert attention away from their inner ugliness.
Trump is the perfect symbol of what a leader for that kind of voter must look like. Compassion-less, violent, hating and materially-focused. Surely humankind has progressed further than that.  Surely we are now kinder and more intelligent than to consider any human being less than another?
News
General
Opinion
True Crime
Politics
Sport
Explainer
Entertainment
Celebrity
Reality TV
Movies
TV
Books
Rogue
Royal
Lifestyle
Beauty
Fashion
Weddings
Home
Wellness
Health
Fitness
Travel
Food
Family
Before The Bump
Pregnancy
Baby
Kids
Teens
School
Parent Opinion
Work & Money
Money
Finance
Career
Lady Startup
Relationships
Sex
Dating
Separation
Friendship
Family
Real Life
Couples