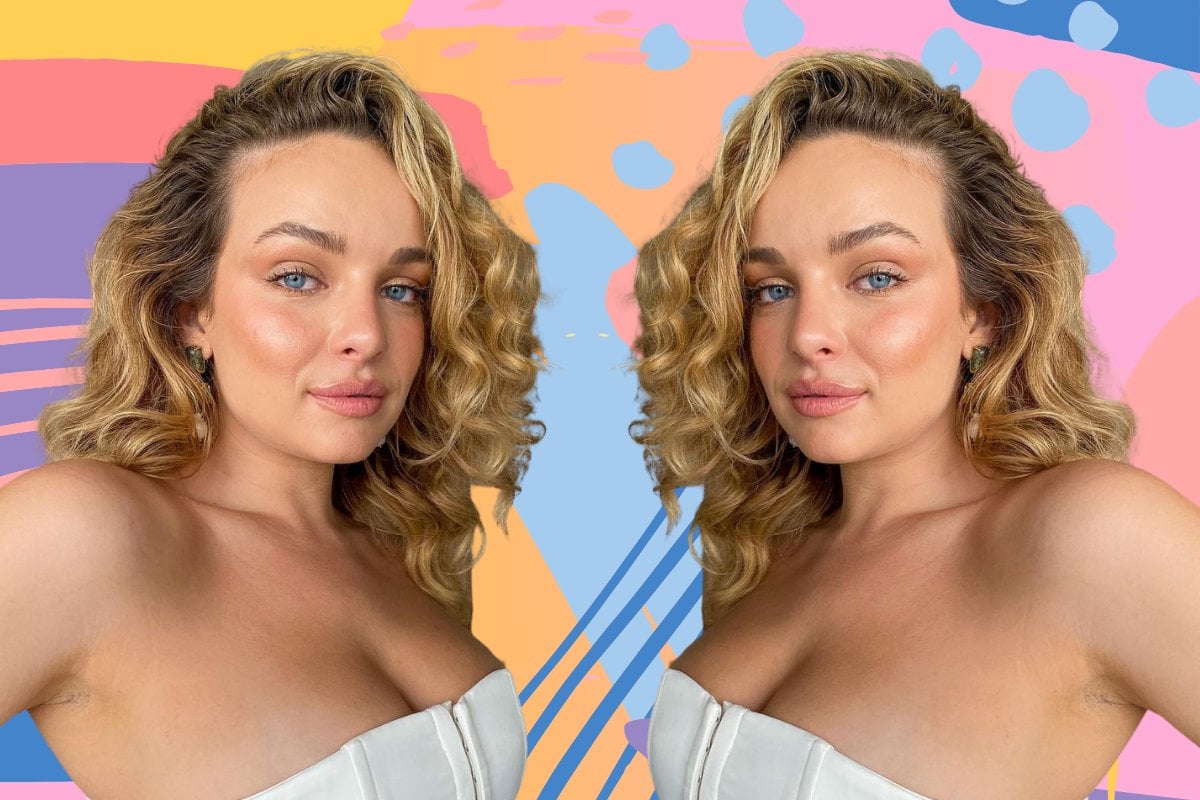 1. Abbie Chatfield had to deal with a ‘poo nugget’ during a date, and we need more information pls.

Abbie Chatfield has opened up about her most rogue dating moment, which involved a "poo nugget" disguised as a grape, and it's a lot.

"We'd had a cheeseboard before this, so I thought that what was on the bed was in fact a purple grape. And I looked closer because the bathroom light turned on, and it is a perfect little reindeer poo, but I was a reindeer," she said.

"I then panicked and picked up the poo with my hands."

She went on to share that in her panic, she put the poo in the sink, as opposed to the toilet.

When her partner asked her what was going on and she confessed that there was some poo on the bed, and he was... unphased.

She eventually went back to place her poo in the toilet, and "scrubbed [her] nails like 14 times".

Listen to Mamamia's entertainment podcast, The Spill, where hosts Laura and Kee discuss the Golden Globes. Post continues after podcast.

2. Michael from MAFS just went rogue on TikTok and we can’t stop watching.

Married At First Sight's Michael Brunelli has jumped on TikTok to spill even more goss from the MAFS Reunion and we care so much.

He responded to the first question; "What were some of the bizarre rules you had to follow on the show?" saying:

“One of the weirdest things when we were on MAFS was that they didn’t film all day, so when the camera crew left [at night], they told us, ‘Don’t learn anything about each other, don’t really talk to each other because it needs to be on camera’.

“If you have a fight, you need to stop mid-fight, call the producer so they can bring the camera and can start recording… then you’ve got to keep going with the fight!”

In other videos, he claimed the producers had little influence on the drama, and that he and Martha didn't stay friends with any other MAFS stars, aside from Nic.

3. Tracey Jewel just announced her engagement, but who the heck is her fiancé?

MAFS star Tracey Jewel has announced her engagement to her high school sweetheart.

Tracey shared the exciting news on Instagram earlier today, alongside a photo of her and her fiancé Nathan Constable.

"We shared our first kiss back in high school braces and all and here we are 23 years later engaged!"

"I would have never guessed it would be you I’d spend forever with but I couldn’t be happier... so here’s to our forever, looking forward to the rest of our lives."

Tracey, who is already a mother to 10-year-old Grace, is currently expecting her first child with Nathan.

In an interview with the Daily Mail, Tracey explained that she wasn't expecting to get engaged before the baby was born.

"We were going to get engaged at some point, but I thought, you know with the bub coming it would happen later in the year, not before he arrived," she told the publication.

Nathan popped the question with a one carat solitaire ring, while they were in Denmark, four hours away from Perth, visiting his parents.

"It's very elegant and classy. It's very me, so he certainly gets points for that," Tracey said about the ring.

"Being my impatient self, I couldn't want to get back so I called my mum and dad to share the news."

4. A very important investigation into whether Brad Pitt is in this Jennifer Aniston selfie.

A photo of Jennifer Aniston is currently doing the rounds on social media. And everyone is asking the same very important question: Is that or is that not Brad Pitt in the background?

But if you look past the cute doggo (a challenge we know) you'll quite clearly see a man in the background of the photo. A man that looks suspiciously like Mr Brad Pitt. 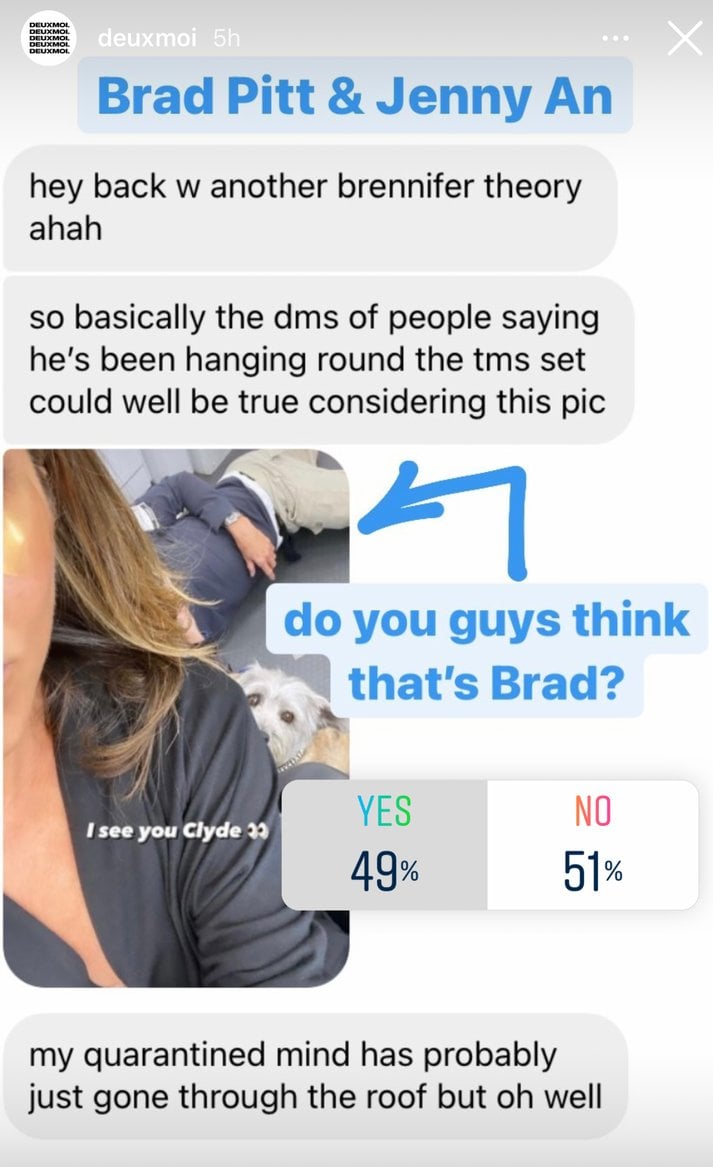 While it's hard to make out if it's her ex-husband for sure, Deuxmoi said they received a number of tips that Aniston is currently filming the second season of The Morning Show on the same lot that Pitt is filming his latest film, Bullet Train.

"There are rumours of [Brad] hanging with Jen in her trailer," the anonymous tip reads.

Of course, the photo could also just be an innocent, albeit sleeping member of the crew.

But we'll leave that up to you to decide.

5. The tide has been turning on James Corden. His Golden Globes nomination hasn't helped.

In recent months, the tide has really turned on James Corden.

The late night TV host and Gavin & Stacey actor is best known as a self-deprecating funny Brit - and the guy who does Carpool Karaoke. 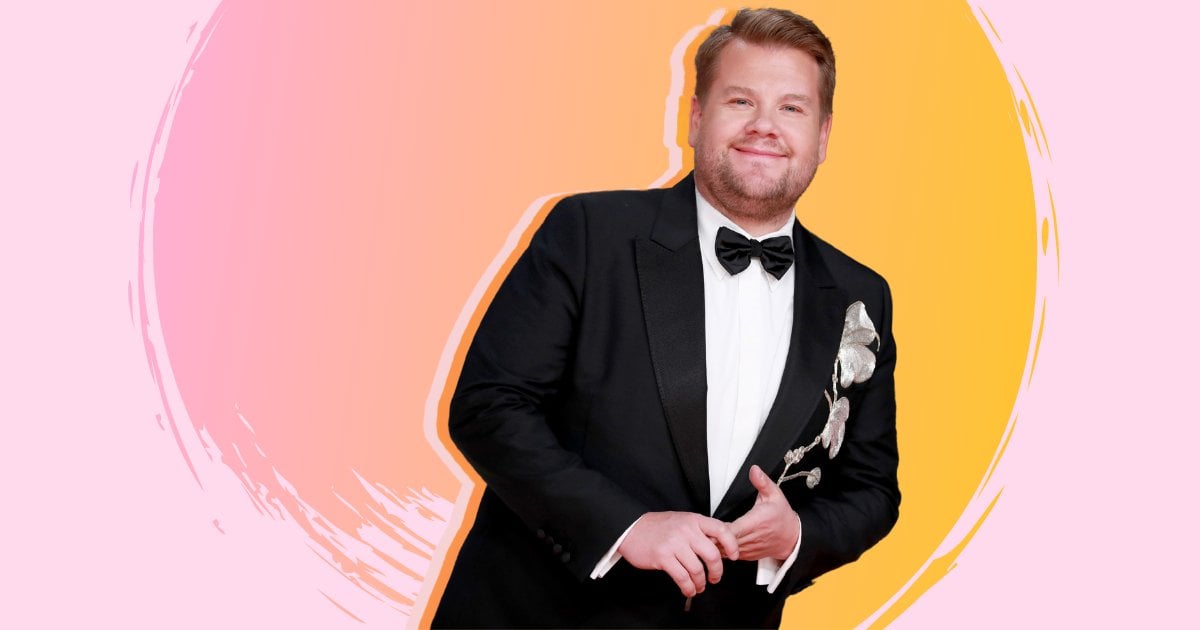 His most recent role was in the Netflix musical The Prom.

It's scored him a Golden Globe nomination for Best Actor-Comedy or Musical, but also a barrage of criticism and controversy.

It's also further increased the mutterings that Corden is not 'nice'.

The criticism is similar to that levelled at Ellen DeGeneres throughout 2020 and ironically, there was speculation Corden could replace her as host of the daytime show.

But the internet has strong thoughts and feelings on Corden, and there are signs Corden's reputation could be heading the same way.

What is the Golden Globe nomination drama?

In Netflix's The Prom, Corden, a straight man, plays gay Broadway star Barry Glickman in a way many considered stereotypical and offensive.

"Corden is playing off crass gay stereotypes rather than sublimating them into his character," Indiewire wrote.

Yet despite the almost universal panning, Corden received a Golden Globes nomination.

In fact, he was the only member of the film's cast to get one. Even Meryl Streep was snubbed.

The internet - almost constantly at each other's throats - were mostly in agreement: This was weird.

So far, Corden has not responded to his nomination or addressed the criticism - but given his silence over the past six months, as accusations about his attitude and behaviour swirled - this is not much of a surprise.

Read the full story over here.