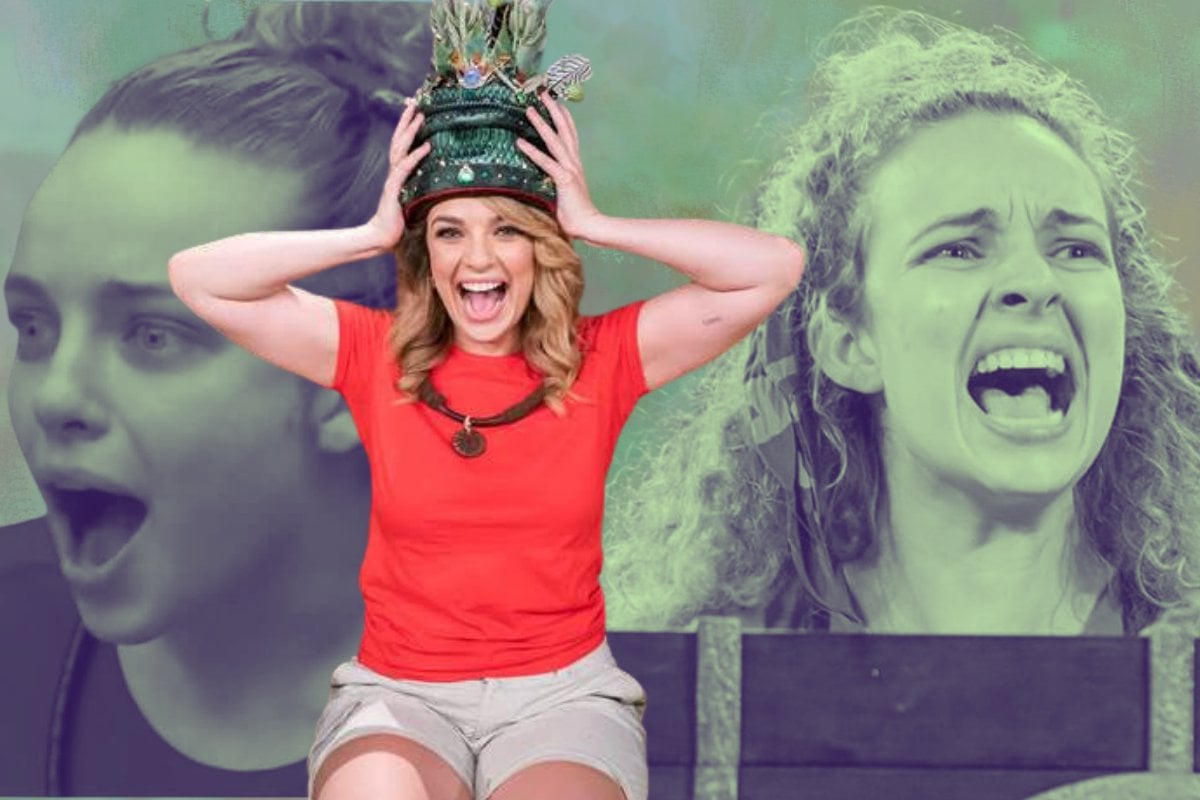 This post deals with bullying, disordered eating and suicidal thoughts and might be triggering for some readers.

Once upon a time in a mansion decked out with roses and date cards Abbie Chatfield appeared on The Bachelor and was instantly labelled a "villain".

After placing as runner-up in Matt Agnew's season of the reality show, Abbie received an outpouring of pubic hate and criticism so strong that she was plagued by suicidal thoughts.

More than a year on and thanks to her win on the latest season of I'm A Celebrity... Get Me Out Of Here! the successful podcast host and soon to be author finally feels like Australia has seen a more realistic side of her.

"After I was on The Bachelor and before I'm A Celeb when I was talking about editing and exposing things people might not be noticing, I was told by people that I changed their perception of girls in the mansion for the next season," Abbie told Mamamia's podcast The Spill.

Listen to Abbie Chatfield's full interview on The Spill.

"Shows like The Bachelor, any love based show really, shows a very one-dimensional perception of the characters on the show, and they are just characters in that sense.

"But on I’m A Celeb your entire range of emotions is on show. There’s a different perception of you in a non-competitive environment because we are all there for charity (Abbie won $100,000 for her charity Dementia Australia, in honour of her grandmother who passed away in June) and to just get through each day."

Of course, wherever reality TV heads, salacious headlines are sure to follow and for Abbie those headlines included her I'm A Celeb co-star, comedian Ash Williams.

But according to Abbie, despite some headlines and Twitter snark that alluded to the fact she was relentlessly pursuing Ash, what really happened behind the scenes was a whole different story.

"We weren’t professing our love for each other or anything like that," Abbie told The Spill. "At one point I said “oh, it’s just a warm body” and everyone was still projecting this idea that I was obsessed with him. But I’m just really affectionate, especially in such a weird environment.

"When I said to him 'no consequences pash' that would translate in real-life to a one-night stand with a friend.

"I was crying about missing (TV and radio presenter) Danny Clayton while I was in there, to Ash, so it was just fun and added a bit of spice to the day."

As lighthearted as it was in the jungle, Abbie said she did experience some uncomfortable flashbacks to her dark post Bachelor days while I'm A Celeb was airing.

"You know how the media is, when the first negative headline started it just circulated around and around. That’s why I didn’t watch the last two weeks of the show," Abbie said on The Spill. "I noticed I wasn’t getting any trolling myself but if I watched the show, I started to get very anxious about what would be written about me.

“But then, no matter what was or wasn’t written about me, my world didn’t change. Which was so different from what happened with The Bachelor, where I would get death threats all the time. There were a few triggering moments, but overall it was a very different experience."

Unlike The Bachelor, however, Abbie experiences an intense physical reaction after filming I'm A Celeb, a show where contestants are giving limited food and take part in a series of grueling challenges.

"The main thing I noticed is that I lost six kilos in the jungle, in three weeks," she said. "I’m quite short, I’m like five foot three, so that’s a lot for me.

"When I got out, I would start eating and then I physically would not be able to stop. I think my body kept thinking it was the last time I was going to eat. But then, because my stomach had shrunk so much, I would binge eat and then vomit afterward.

Watch Abbie get bitten by a snake in a brutal clip from I'm A Celeb. Post continues after video.

"It took me a week or more to recover after the show because of the starvation and the exhaustion. You’re just stuck in this world where you’re dirty and hungry all the time.

And just in case you were under any illusion that filing I'm A Celebrity was a glamourous experience, Abbie explained that the grossest moments of the show included the toilets and an army of flies.

"The grossest thing about it, and this was something we loved to talk about because it was so funny, is that about two weeks in, in the long drop toilet, Botflies started to... exist in the long drop," she told The Spill.

"So when you’d go and do your poos, Botflies would aim for your little, you know. So they would fly up and insert themselves into you.

"We all started sharing information, and it was so funny, we were like cavemen sharing information. There was this seat sanitiser spray, and we learned that if you sprayed it into the toilet for a few seconds, then you’d have ten seconds to do a poo before they came back.

"You’d have a little breather, to do your poo really quickly, and then jump off.

"That was probably the worst thing," she laughed. "Every time you needed to do a poo you would say, “Oh God, the Botflies are going to come for me”.

"I mean, poor Grant Denyer, he’s Australia's Golden Boy, and he’s got Botflies near him."

It turned out to be a genius, if somewhat uncomfortable in the moment, move.

All hail Abbie Chatfield, the new queen of I'm A Celebrity...Get Me Out Of Here!