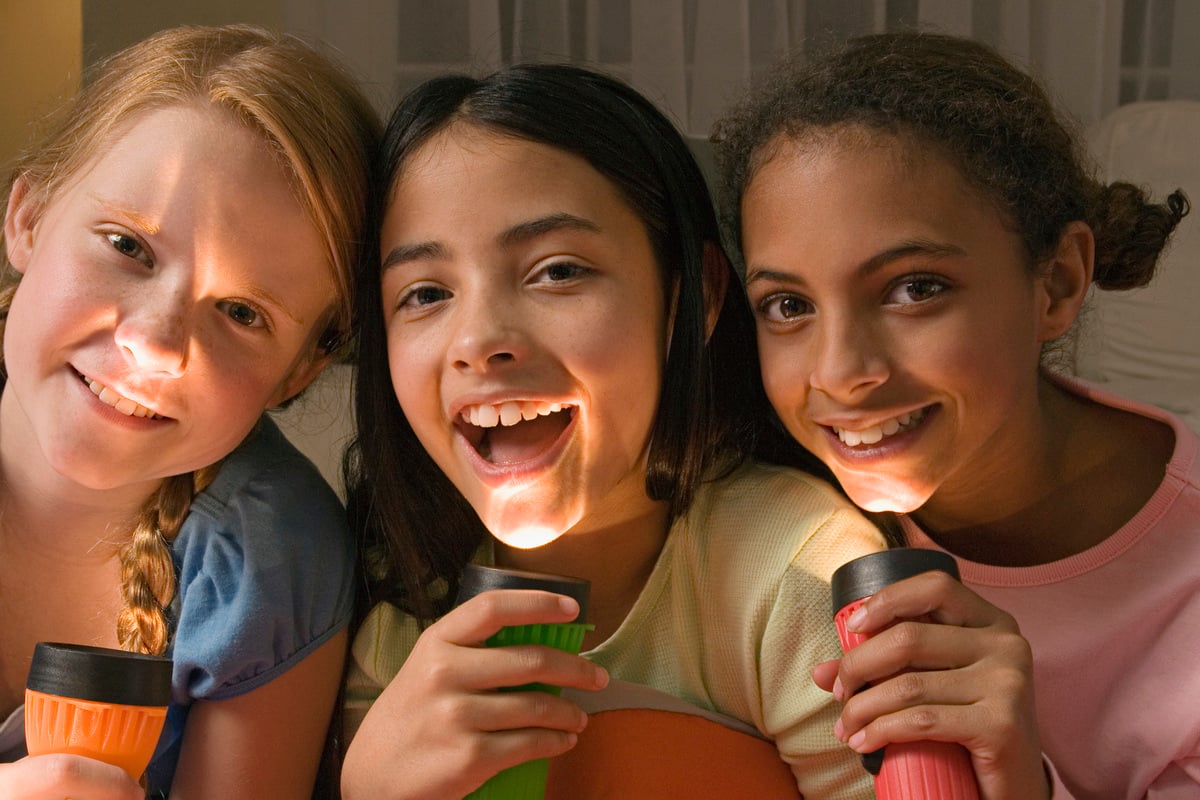 There was nothing quite as exciting to a child or tween in the 90s and early 2000s as a sleepover.

You'd grab your sleeping bag, half falling out of its bag because precisely no 11-year-old girl could correctly roll it up on a sleepy Sunday morning after 30 minutes of sleep and eight hours of ghost stories. Then you would head to your mate's house with your cute flannelette pyjamas and favourite teddy bear under arm.

Once there, the opportunities were endless. Or semi-endless, depending on how cool your friends' parents were.

Side note: these 90s toys would make an appearance at a sleepover too, for sure. Post continues below video.

No matter, there was a fairly well-trodden path of sleepovers past to follow. Because if you did not choreograph a dance routine - probably to a Steps song - were you even at one?

I've recently been thinking about how weird sleepovers were when I was younger. This is mostly because a. I obviously long for much simpler times and b. There really isn't much else for me to do with my time.

Seriously, sleepovers were weird - why are children so obsessed with witches and ghosts? - but they were also the bastion of tween culture, somewhere we could be unapologetically... tweeny.

Sleepovers made lasting memories and have given us plenty of nostalgia. Anyone who attended a sleepover in their youth will remember what they were like... and that they involved absolutely every one of the below activities. Every. Single. Time.

The event would kick off with multiple prank calls to boys in your class, even though you totally didn't like them, ew... boys...

But you'd tried to get their attention on MSN with the classic 'appear online/offline' tactic too... and someone would 'accidentally' write an incoherent jumbling of letters from banging on the keyboard just as an excuse to kick off the conversation with a "omg sorry, that was my friend oops hehe".

After logging off for real, you would crowd around in a circle of giggles because one friend had got their hands on their older sister's Cosmopolitan magazine, and there was a sealed section you all thought was scandalous despite having precisely no idea what any of it meant.

A fashion show and photoshoot would follow, because you had to look your best before outshining your tone deaf pals during your rendition of 'Wannabe'. You were Baby Spice, obviously.

Then came the moment you all got to show off your dance talents with a choreographed dance routine to 'Lady Marmalade', which in hindsight, had far too much hip movement.

For sustenance, you'd play 'the chocolate game', which meant scrambling to dress up then eating a block of chocolate with a knife and fork for reasons that remain unclear to this day. Could you have just eaten the chocolate without putting on a strange hat and scarf? Yes. Did you? Absolutely not.

It would turn out that was just a pre-dinner dessert because after piling into your friends' mum's van, you'd harass her until she gave in and took you through the Maccas drive thru. Win!

Then everyone pretended they were too old for a Happy Meal, even though you all actually really wanted the toy.

On your way home you'd visit the video store (RIP). It was lucky you'd already got changed into your PJs, even though it was definitely still daylight because everyone knows that was the official Blockbuster dress code. You all agreed to rent one scary movie and one comedy or teen rom-com to watch afterwards, so it wouldn't be too scary to sleep.

(Seriously, to this day I wonder why my friends mum let us hire Coyote Ugly as... nine year olds).

This was pointless though, because you never really had any hope of sleep, anyway.

No one wanted to be the first one to drift off. But also on account of every tween girls' obsession with ghost stories and saying Bloody Mary three times in the mirror.

Then suddenly it was 1am and everything was funny, especially when your friend who thrived on attention impersonated teachers and people you didn't like at school.

You tried your best, but you were all terrible at laughing quietly to avoid getting in trouble.

Everyone got really good at pretending to sleep at 2am when your friends' dad would get out of bed to tell everyone to shut up, though.

You'd eventually drift off about 5am, but then the sun would creep in through your mate's non-black-out curtains and you'd be awake again.

Thankfully, the early hours of the morning was the perfect time for GOSSIP.

By mid-morning it was time to pack your sleeping bag away and you... couldn't do it. How does such a puffy, long sack fit into such a small bag?

Sometimes you'd have breakfast, but sometime's your friends' parents preferred to get rid of you early enough for that to become your own family's problem. Fair enough.

Your parents picked you up, and you'd get in the car tired and ready for a day of being an absolute nightmare to deal with. How fun was being an 11-year-old with an attitude?

Later you'd jump onto MSN and pick back up the gossip that was so rudely interrupted by needing to go... home.

>Take our short survey for a chance to win $50.