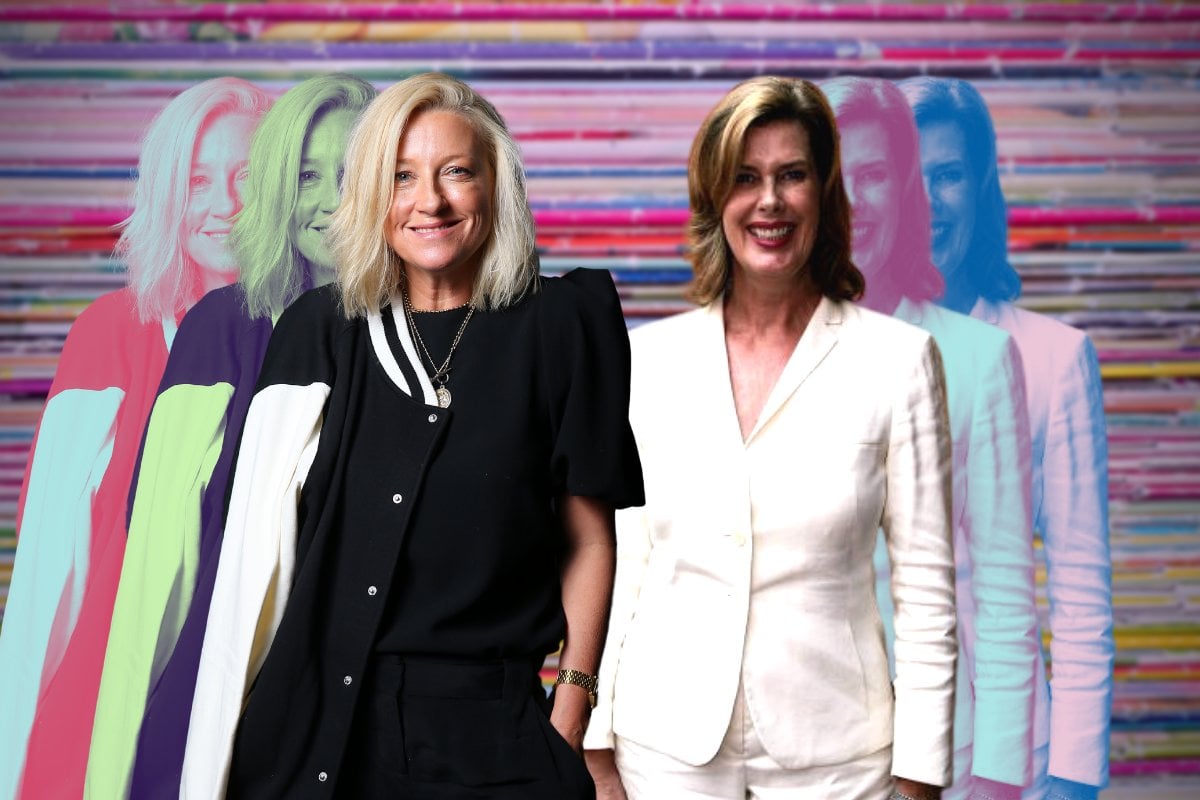 In the early 90s, Paula Joye found herself scrambling up and down the side of a cliff, a Versace dress being tugged from her hand by strong winds.

A photoshoot for Vogue Australia was happening below, and as the magazine's "girl Friday" (a low-level position roughly equivalent to a modern-day intern), she was at the beck-and-call of, well, everyone.

"I was going up and down the cliff, practically with an abseiling rope to get what the fashion editor needed," Joye told Mamamia's No Filter podcast. "And I remember it was so windy and having this Versace dress, sort of like a flag, in my hand, and [saying] to myself, 'You're going to have to kill yourself to save the dress.'"

And what price for her life?

"I really was so happy to be at Vogue," Joye said. "I would have done anything — no, I did do anything — just to breathe the air."

Paula Joye went on to become the editor of several major glossies, including Cleo, Madison and Shop Til You Drop, and was the architect of shoots with the likes of Kate Moss, Claudia Schiffer, Linda Evangelista, and Cindy Crawford.

Comparing magazines to the real-life version of film The Devil Wears Prada, she said she's been both Meryl Streep (formidable boss) and Anne Hathaway (wide-eyed assistant).

From her time as the latter, she recalls running the length of corridors with shoes and handbags, making coffees, photocopying, crying to the tea lady, and giving her editor's dog a straight blow-dry ("That is a true story, that happened").

"Once, for Vogue Living, I had to cut ribbons into 10 centimetre pieces, then iron them and put them on name tags for an event... And that took me until about 2am the night before, and then I had to set up the next day at seven," she said.

"But it's that discipline and it's that excellence and that standard that those five letters stood — and still do stand — for. That was just amazing training."

Listen: Mia speaks to Paula Joye and Deborah Thomas on No Filter. Post continues after audio.

Around the same time, Deborah Thomas was the beauty and lifestyle editor at Cleo, a magazine famous for its 'Bachelor of the Year' issue and being the first Australian women's publication to run a nude male centrefold.

While stepping in for an on-leave Lisa Wilkinson (then the Editor-in-Chief), Thomas leaned into the title's audacious bent and ran an old photograph of Arnold Schwarzenegger, sans clothing.

"We'd just been shown this new scratchy technology, which is the same technology, of course, that they have on all the lottery cards. And I'm saying to [the publisher], we're going to run the picture but we're going to put some underpants on him in the scratchy stuff," she told Mamamia.

The magazine hit the shelves with a cover line to the effect of, "Is Arnie the biggest star in Hollywood? Scratch off his undies to find out."

Fortunately for the actor, the effect didn't quite work, so when readers scratched off his jocks they scratched the photograph away too. 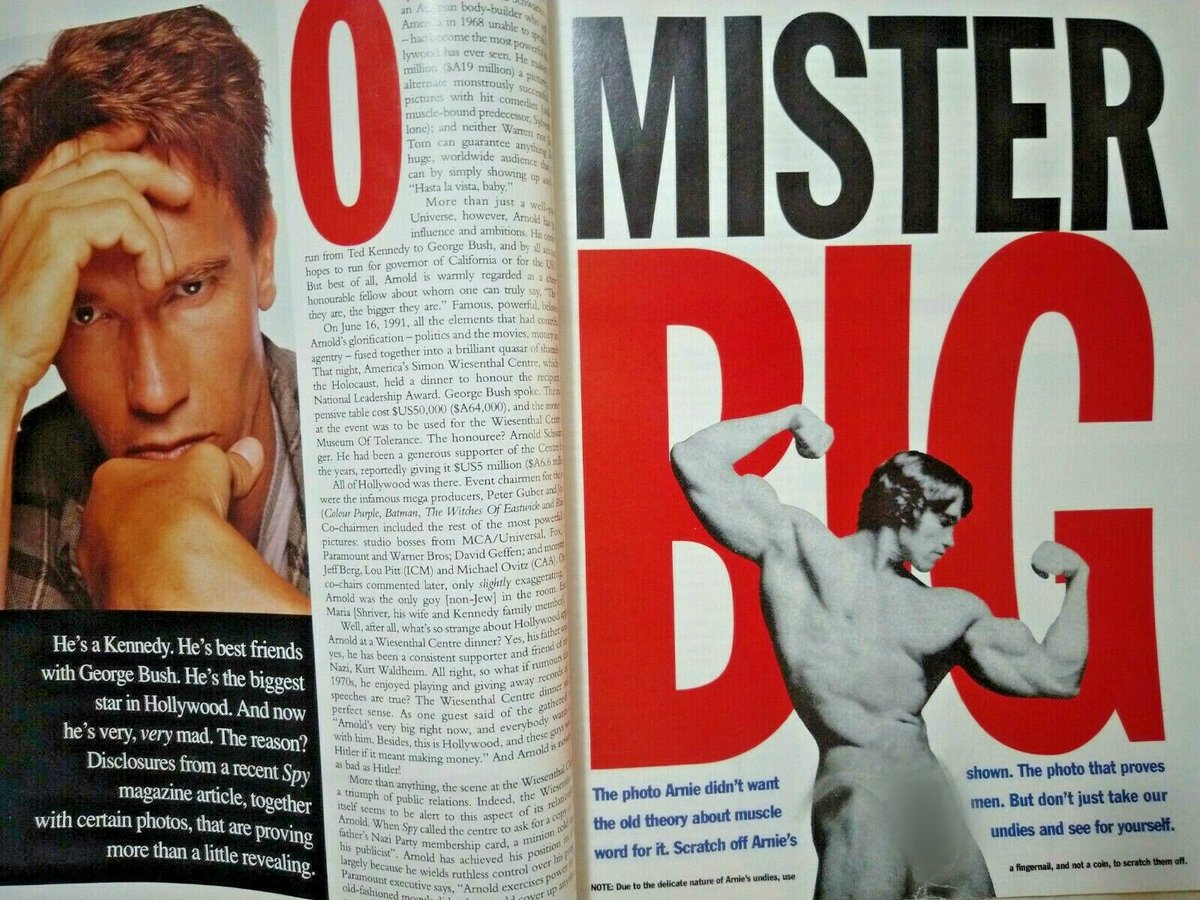 Thomas stepped into the Editor-in-Chief role at the Women's Weekly in 1999, and all the cachet that came with it.

She was invited to a multi-million dollar party at Karl Largerfeld's Monaco house for a fragrance that was never launched, for example. And covered James Packer's $10 million wedding to model Jodhi Meares at his family's compound in Sydney's Bellevue Hill.

"The wedding itself was amazing," Thomas said. "It was dancing cheek-to-cheek, with Elton John singing, the most extraordinary wine and food, and a three-storey marquee."

That sort of extravagance is familiar to Paula Joye from her time as a beauty writer.

"The economy was so robust that you would literally have a mascara launch in Singapore where you would be flown to a five-star hotel possibly on a small plane, or a catamaran with somebody fanning you, and then you would be presented with a mascara," she said.

"Then you would go back on the catamaran and back to your desk in Sydney and write about it. Unbelievable."

Those heydays have now passed, and once-landmark titles have been progressively shelved by publishers looking toward the digital dollar. Dolly, Harper's BAZAAR, Madison, ELLE, and Cleo have been among the victims.

Though they'd already moved on by then (Thomas is now the CEO of children's cancer charity Camp Quality and Joye is steering her own digital lifestyle brand, The Joye), their hearts are with the people whose jobs were lost.

Because among the memories of models and lavish events, it's the late finishes and early starts, the dedicated teams hunched over a frantic page re-design, the bosses and devoted "girl Fridays", that shaped their experience.

"What defined my time is the people," Joye said. "The incredibly funny, hardworking, awesome, well-dressed men and women that I filled two decades of my life with."