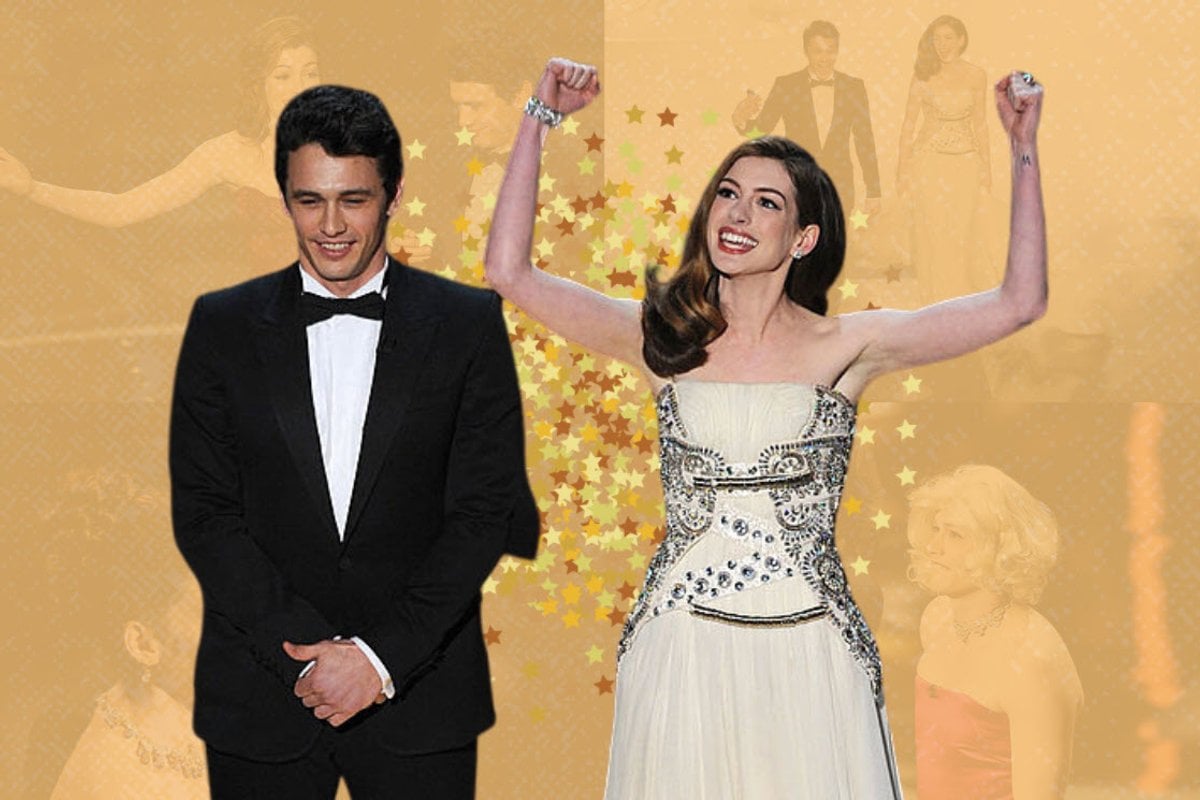 Throughout the long history of the Academy Awards, there have been no hosts, good hosts, bad hosts, and Anne Hathaway and James Franco.

The pair's hosting of the 2011 Oscars ceremony is one of the most memorable ever, and not in a good way. They tanked, spectacularly; bad enough The Hollywood Reporter said the show was "unwatchable".

It's become part of pop culture history, along with a joke used by Hathaway herself in 2019: 'No matter what happens at the Oscars, just remember, it's already been worse'.

Watch: The top five award show fails (excluding the 2011 Oscars, because that would be an unfair contest). Post continues below video.

Hathaway was in peak movie star mode, dancing, singing and changing outfits no less than 10 times. Franco, in contrast, was so low-energy he may as well have been taking a nap on stage.

She was very clearly the one trying, coming across especially over-enthusiastic next to a slow, robotic Franco.

As it turns out, the preparation for that night makes the abysmal result even more awkward.

Oscars show writers David Wild and Jordan Rubin spoke to The Ringer ahead of the 93rd Academy Awards on April 25, 2021, recalling the different work ethics and clash of personalities between Hathaway and Franco.

"It was like the world's most uncomfortable blind date between the cool rocker stoner kid and the adorable theatre camp cheerleader," Wild said, going on to explain the behind-the-scenes tension which was obvious even before they reached the stage.

"This is a memory, but [Hathaway] was like 'Maybe you should try that,' and he was like 'Don't tell me how to be funny,'" he recalled. 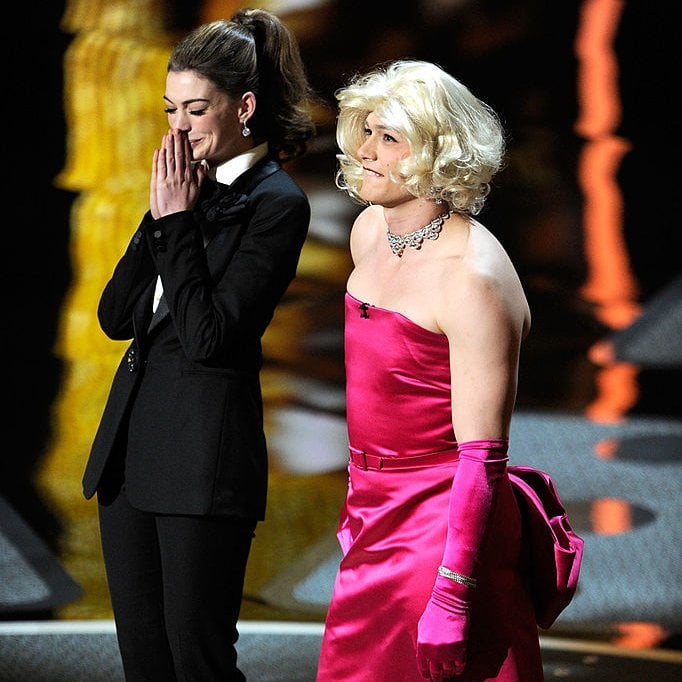 Hathaway "showed up ready to play and committed 110 per cent." But it was hard to get Franco to answer a phone call.

"He always seemed to be on a flight, and it was very hard for me to get a hold of him," Rubin said.

"He was a great guy but often looked like he had just woken up from a nap. It's almost like you're showing up to a tennis court and one person decided that they were going to play in the U.S. Open and the other wanted to play in jeans and just kind of hit a few balls."

The red flags did cause "some level of panic" for the production team, even as close as the evening before the show.

But when Wild saw Franco smiling at Hathaway, he figured they'd made a breakthrough. It was not to be.

"Anne had gone to her dressing room for a minute," Wild recalled. "James was smiling at her stand-in." 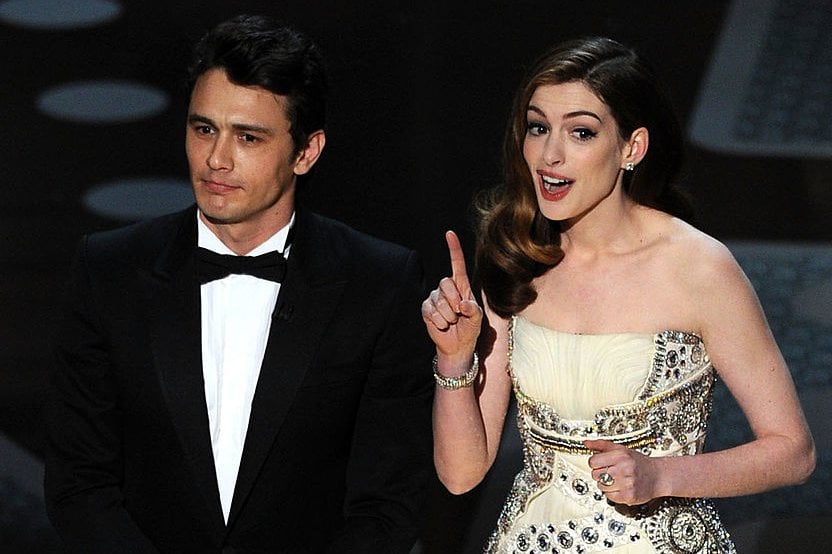 The pair also shared that Justin Timberlake was their first choice as host, but he politely declined.

"I had been writing with Justin and I remember the producers said to me, 'Do you want to do a soft ask if he'd host the Oscars?'" Wild said.

"He said that he'd love to do it, but he thought it was a year too early for him. He wanted to wait until after The Social Network had gone through an awards season."

Production had already decided they needed a host that would appeal to a younger audience, after Hollywood stalwarts Alec Baldwin and Steve Martin had hosted the 2010 show. That's how Franco's name came up.

But of course, Hathaway took the bulk of the criticism, and it had the biggest toll on her reputation.

The 2011 Oscars become one of the key reasons to dislike her, and Hathaway has a bizarrely large group of haters (they've even got a name: Hathahaters).

Soon after the show, in March 2011, Franco told David Letterman on his late-night show that perhaps he did have low energy, but he'd delivered his lines as well as he could.

His comments fueled the narrative that Hathaway gave too much, as opposed to him giving not enough.

"I love her but Anne Hathaway is so energetic," he explained.

"I think the Tasmanian Devil would look stoned standing next to Anne Hathaway." 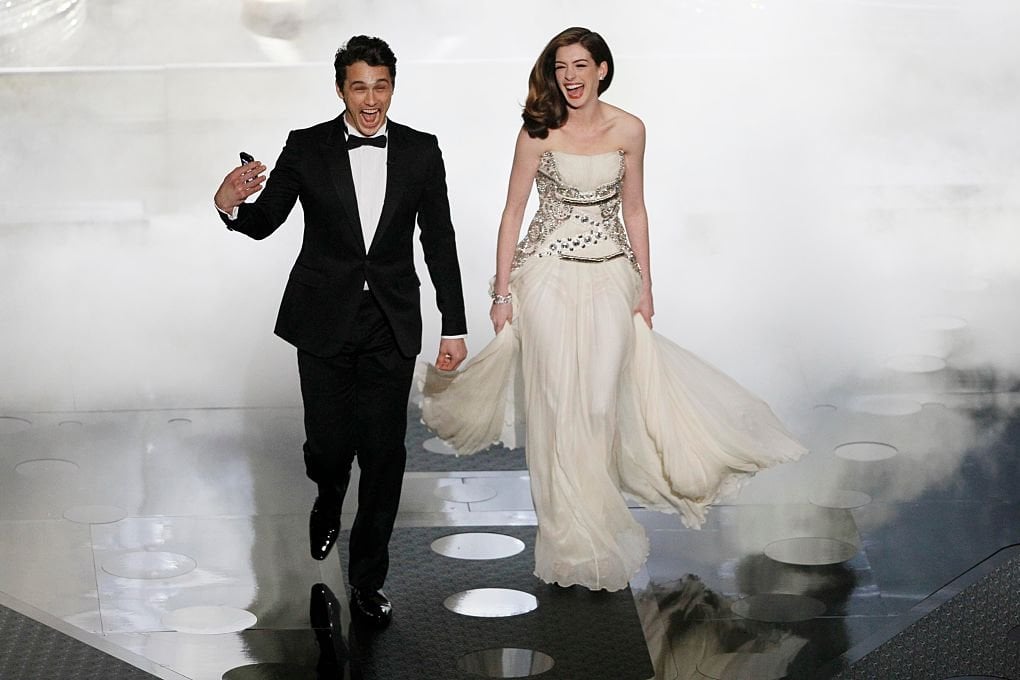 Strangely enough, in 2019, Hathaway said she had not even wanted the hosting gig, but was convinced by Franco.

"Can I dish some tea?" she told People. "I turned that gig down, and James is the one that convinced me to do it."

She said she'd been convinced the entire thing was Franco pranking her.

"If he had turned around and said 'I'm pranking you right now', I think I would have been okay with it," she said.

"I would have been like 'That sucks but it's epic'. So he might still turn around and do that on all of us, by the way.

"When all the dust settled I was just like 'You've got to be kidding me'. Your first instinct is usually the right one and all the reasons why I turned it down, came true."

Perhaps the issue was poor talent choices from producers too focused on bringing in a new audience to consider how ill-matched they were.

But what The Ringer's interview makes clear is that even if the show was doomed from the start, at least Hathaway tried.

Reply
Upvote
From the outset, they appeared to be a completely mismatched and erroneous partnership for the gig.
B
beachhouse84 a year ago

Reply
Upvote
2 upvotes
Hathahaters- are these all women? If so, f#*k the patriarchy for making women turn on each other when James Franco gets away untarnished.
C
cat a year ago