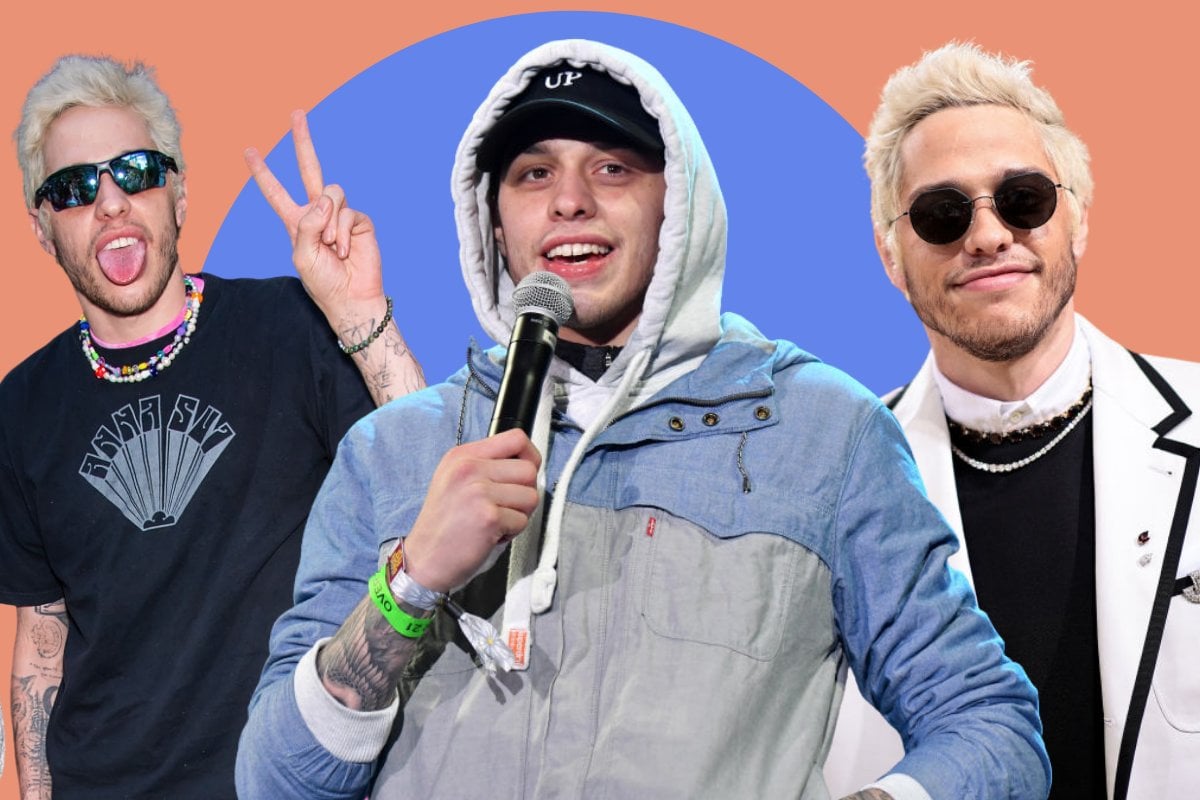 A lot has been said about Pete Davidson and his dating history lately and by a lot, I mean like a lot, a lot, a lot and that’s not even mentioning the memes.

However, for those of you not up to speed with the American comedian, actor, and Saturday Night Live star’s dating history – and we don’t blame you, it’s extensive – let’s just do a quick recap.

Davidson’s first real high-profile relationship was with pop mega-star, Ariana Grande, back in 2018.

Watch: The celebrity couples we forgot about. Post continues below.

The pair made headlines after getting engaged within a matter of weeks and then again for splitting a matter of months later.

Grande then went on to release an album and song titled 'thank u, next' referencing Davidson, amongst other exes.

So, WTF is happening?

As the general conjecture goes, nobody seems to understand how this guy is doing it? And by it, I mean back-to-back dating of some of the world’s most famous, successful, and conventionally beautiful women.

Questions have been asked, and not just in the group chat with my girlfriends, but in countless articles and opinion pieces around the world. And the theories abound. Maybe it’s because he’s funny. Sure.

Or one of the most popular theories: maybe it’s that BDE. Totally plausible.

Most likely it’s a combination of all these factors, but potentially there’s something else at play here that we, and by we I mean the internet, hasn’t yet considered.

Yes, it seems there might be a scientific reason why everyone is falling in love with Pete Davidson right now. And it all comes down to mate choice copying.

Wait. What is mate choice copying?

Mate choice copying is the process of choosing a mate based on the observation and acceptance of a mate by others beforehand.

Extensive studies have been conducted on this phenomenon within the animal world with studies also showing its relevance to humans. It kind of works like fashion trends started or endorsed by celebrities.

Tamara Cavenett, President of the Australian Psychological Society and a practising clinical psychologist says a big part of mate choice copying goes back to the caveman days and the fundamental human need to be accepted by the tribe.

"Biologically, we're designed to actually care about what other people think... There are strong social reasons to actually belong to a group... because humans are innately group driven," Tamara explains.

"So I think if someone's dating someone that’s previously been seen as acceptable, it does give you that social influence that can encourage whom you date, or at least whom you see as acceptable to date. And I think you can see that with famous people. You can imagine if this person has dated them, and they're acceptable to them, then they're worthy."

Tamara goes on to elaborate further, "We certainly do see people who choose to date someone because of social influences. So who they’ve been seen to previously date can actually elevate the status of that person and make them appear more desirable to someone."

I'll have what she's having.

Tamara says this is most likely because females have been conditioned to care a lot about what other people think, especially when it comes to dating.

"From a female point of view, if that person has dated another person that they see as having been valuable to have dated, it automatically means that person is accepted by someone, is seen as verified, and then is therefore also seen as valuable," Tamara says.

"I think as females we’re much more vulnerable to those social validation-type strategies... We tend to care potentially more about some of those social influences, particularly with regards to dating, whereas men seem to be less emotionally affected by that."

Additional mate choice copying studies reveal that both males and females are influenced by the attractiveness of someone’s partner, meaning that people become more desirable to the opposite sex when they have an attractive partner.

So could mate choice copying potentially be what’s going on with Davidson? Tamara says it’s actually quite possible and likens it back again to celebrity endorsements.

"If women who are highly attractive and very successful have dated him, then I can see that he would automatically be considered more valuable than had that not happened. I definitely think that's valid. When you see someone whom you see as high profile or important endorsing or wearing something, it automatically increases the value of that product," she says.

﻿So mate choice copying might go some way to explaining the spike in Davidson’s stocks right now, which may even, if it hasn’t already, become a self-perpetuating cycle, as Tamara explains further:

"I would definitely suggest that it would make it far more likely for him to be able to keep that cycle going. I would say that if they [other women] are aware that he's dated people who are highly attractive that have potentially endorsed him if you like and verified his value, that future partners would see him as automatically dateable as a result. I would also assume that it would potentially increase his own self-confidence and outward confidence to other people, and that for women can be a highly attractive quality."﻿

With reports of Kardashian and Davidson still largely in the grey area, we may have to wait to see if the world’s ultimate influencer has in fact been socially influenced in regards to her latest choice in mate.

And although it was Grande who famously penned the lyrics, 'Thank you, next. I am so f***ing grateful for my ex,' following her split from Davidson, as time and women go by, it’s starting to feel like maybe he’s the one who should be singing them back to her now (along with the long list of beautiful ladies who have since followed).

﻿﻿Emily McGrorey is a writer, digital comms consultant, wife and mother of three based in Newcastle, NSW. You can follow her on Instagram at @emily_mcgrorey.

Reply
Upvote
1 upvotes
Interesting theory. I just find him funny and attractive which is a good enough reason for me. Having dated KK and Ariana makes me wonder if he's actually as down to earth as he seems.