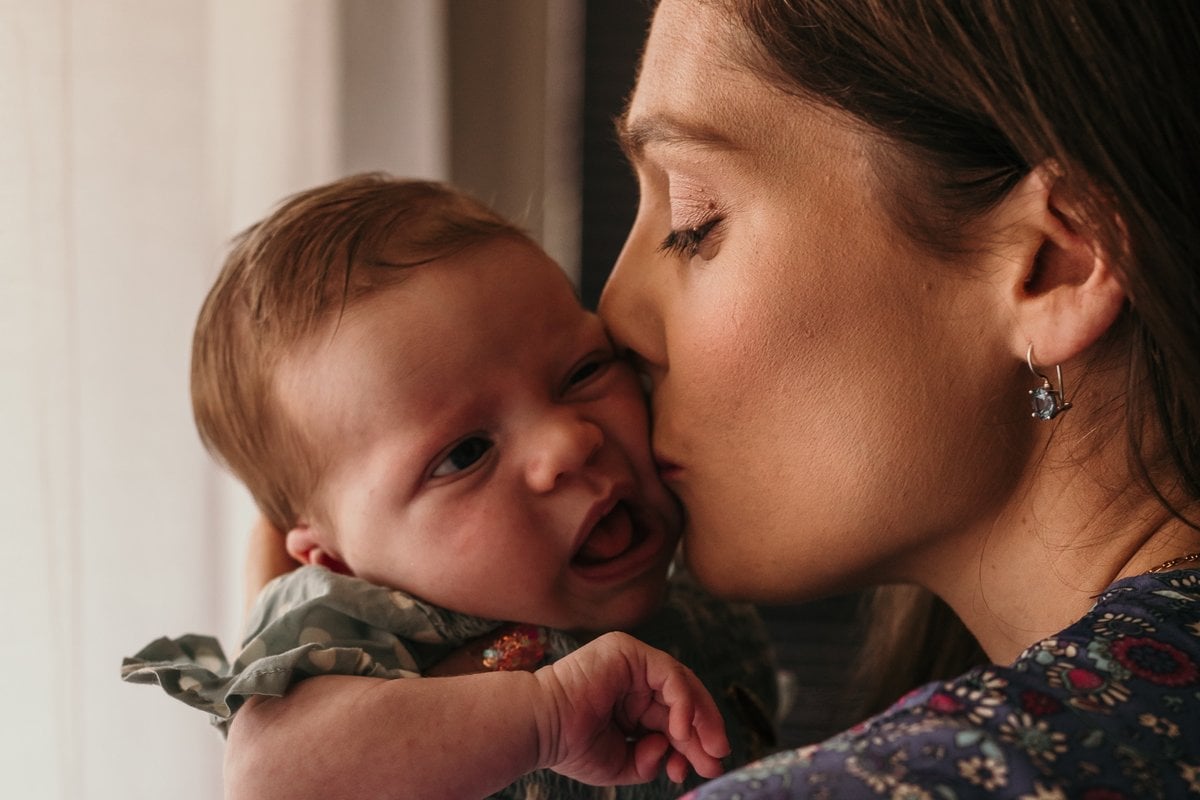 This post deals with postnatal depression and suicide and could be triggering for some readers.

"I felt like I was dying, and I was too scared to fall asleep because I thought I would die," Melinda McLennan told Mamamia.

The young mum from northern New South Wales had just given birth to her first baby four months earlier and was in the grip of postpartum psychosis.

While you're here, Mamamia and PANDA bring you everything you need to know about postnatal depression. Post continues after video.

She spent those early months on limited sleep, in and out of psychosis, which culminated in three days straight of not a wink of sleep.

"I always felt wired. I felt like I was high on drugs and couldn’t understand how time was passing," she said.

"I didn’t know when to eat or sleep."

Melinda described the birth of her daughter in February last year as "frightening" and "traumatic" after going over her due date, being induced and then needing an emergency caesarean – something that was definitely not in her birth plans.

While she says the hospital staff were kind and caring, they were overburdened, and within 48 hours of having her daughter, Melinda and her baby were sent home.

"I didn’t have a huge support network that lived close by, or a network that could be by my side within half an hour to provide support," the 31-year-old explained.

"The months that followed were dark and very isolating."

From the day she brought her baby home, Melinda believed something was not right and as each day passed, her grip on reality slipped further away. 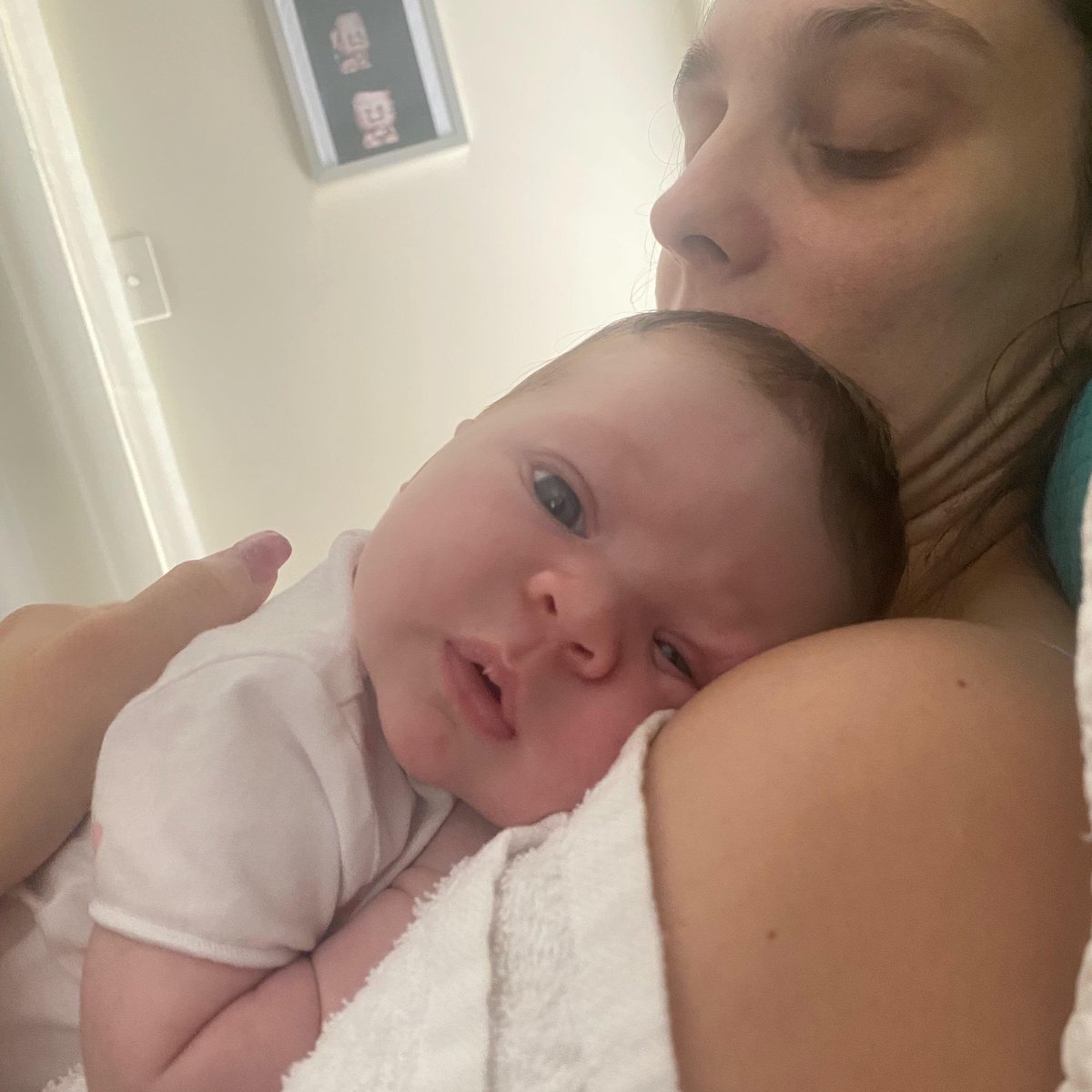 Being aware of postpartum depression, she reached out to her case midwife, community nurse and GP, who organised a mental healthcare plan.

She made regular calls to Beyond Blue and the Australian Breastfeeding Association, and became a client of Tresillian. She also called the perinatal support services, PANDA and Gidget, but was met with answering machines and never a return call.

"I felt severe desperation. I started thinking no one and nothing could help me," Melinda explained.

"I was doing all the 'right things' and yet my calls for help were overlooked."

After two days of only three to four hours sleep in a "very frail" situation, she went to the hospital pleading for help and was given medication to help her sleep.

However, the medication had a negative effect on Melinda, sending her nervous system and mental health into a deeper downward spiral.

In the week and a half that followed, she went to two different hospitals at least four times, pleading for help.

On one occasion she even called an ambulance, but on arrival the hospital told her they couldn’t help and suggested she go to the other one.

It was 4am, and she was asked why she hadn’t come in earlier in the night.

"A nurse said to me, 'What do you expect us to do? All of our mental health care team are gone. We can’t do anything for you,'" Melinda said.

"I was treated like I was a nuisance. My heart was shattered. We left because I couldn’t fight anymore."

Unable to get the help she needed, Melinda began experiencing suicidal thoughts.

She returned to the hospital and grabbed hold of a nurse by the arm and begged her not to send her home.

This time her pleas were heard, and she was put on the acute mental health case load for six weeks.

"My recovery has not been a walk in the park," she shared.

"There were moments of helplessness and desperation, alone at home.

"Getting sleep brought me down, but there would be moments in the day where I would just stand there and didn’t know what to do. I felt like a baby again and had to train my body to listen to messages. I had to reconnect back in with when to eat, sleep, and go to the toilet."

Liste to This Glorious Mess where Leigh Campbell and Tegan Natoli open up about their very different experiences with postnatal depression. Post continues after podcast.

Melinda believes staying in a mother and baby unit with around-the-clock care might have helped her recover quicker.

However, despite having the largest population base, New South Wales only has two units, all in Sydney, with a further one due to open later this year.

She has begun a campaign to lobby the government to establish a mother and baby unit in Northern Rivers.

"I have had hundreds of mothers reach out to me, ones that have ended in suicide, ones that were put in mental facilities without their babies. They all say there needs to be more services," she shared.

"I knew this couldn’t happen to anyone else, and I wasn’t willing to accept it was okay or risk someone losing their life.

"I will see it through. I don’t want my story to be just a story. There needs to be something that gets changed because of it."

Founder of the Centre Of Perinatal Excellence (COPE), Nicole Highet, said given the population base of New South Wales, the demand for more mother and baby units is very high.

She stressed that keeping mother and baby together when the mother has severe mental illness in the postnatal period was critical.

"It is not something you can do via telehealth. Women need monitoring in a safe and secure area," she said.

Reply
Upvote
Thank you for being so brave and sharing your story. I'm flabbergasted this is the way you were treated. I thought things were suppose to be better now, more options available. Do nurses get trained in post natal depression and recognising symptoms? Unbelievable you were told there was nothing they could do. I had PND 24 years ago when I had my first baby and it was 12 months of hell. I was sent to a phychiatrist (male) by my GP (male) who had no idea what it was like after having a baby. It's not like the movies and throw away all the books. I went to Tressillian and I made the counsellor cry after telling her my story. I really thought there was no hope for me. BTW Tressillian were very supportive. I truly admire your guts in telling your story, we need to hear more of them.
B
bowerbird 22 days ago

Reply
Upvote
Thank you for sharing your story and advocating for more baby and mother wards. I was unable to get into a mother/baby ward (in SA) when I went through psychosis and put into a mainstream ward where they didn’t realise I had a baby. When they did, I wasn’t able to bring her in. It was such a traumatizing time and more needs to be done to care for women and their babies at this most vulnerable time.
News
General
Opinion
True Crime
Politics
Sport
Explainer
Entertainment
Celebrity
Reality TV
Movies
TV
Books
Rogue
Royal
Lifestyle
Beauty
Fashion
Weddings
Home
Wellness
Health
Fitness
Travel
Food
Family
Before The Bump
Pregnancy
Baby
Kids
Teens
School
Parent Opinion
Work & Money
Money
Finance
Career
Lady Startup
Relationships
Sex
Dating
Separation
Friendship
Family
Real Life
Couples