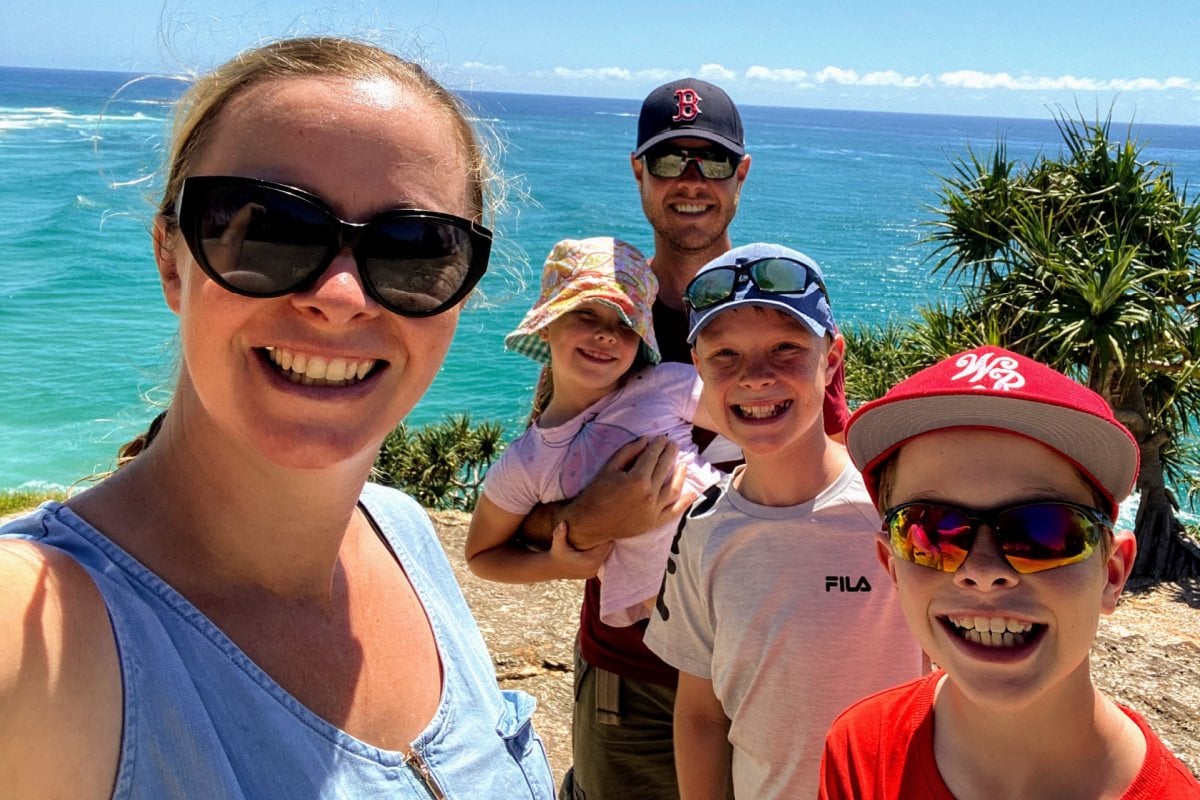 Jaime's phone started ringing at 1am on August 1. Half asleep as it blurted at her from the dark, she missed the call.

They called again at 7am. It was QLD Health informing her that her 12-year-old twins had tested positive for COVID-19.

The whole family had rushed off to get tested the day before, after being notified that the boy's karate gym and school had been listed as exposure sites.

"An ambulance will be arriving to take your whole family to hospital quarantine," she was informed.

"It could arrive in the next 10 minutes," the person on the other end of the phone added.

Watch: The COVID-19 symptom you need to be on the lookout for. Post continues after video.

Panicked, Jaime and her husband rushed around their Brisbane home packing and trying to rearrange their world. They'd be gone for at least two weeks, they'd been told.

What about the dogs?

After realising that they had nowhere to send the dogs, they called the QLD COVID helpline and it was agreed that just one parent would escort the boys to hospital. The other could stay home with their seven-year-old daughter and the pets.

Jaime's husband volunteered. She was the only one vaccinated, but had had Hodgkin's lymphoma a few years prior so was at a higher risk of getting seriously unwell.

At first the boys, who were both unsymptomatic, were super excited by the prospect of an ambulance ride and hospital stay. What an adventure! 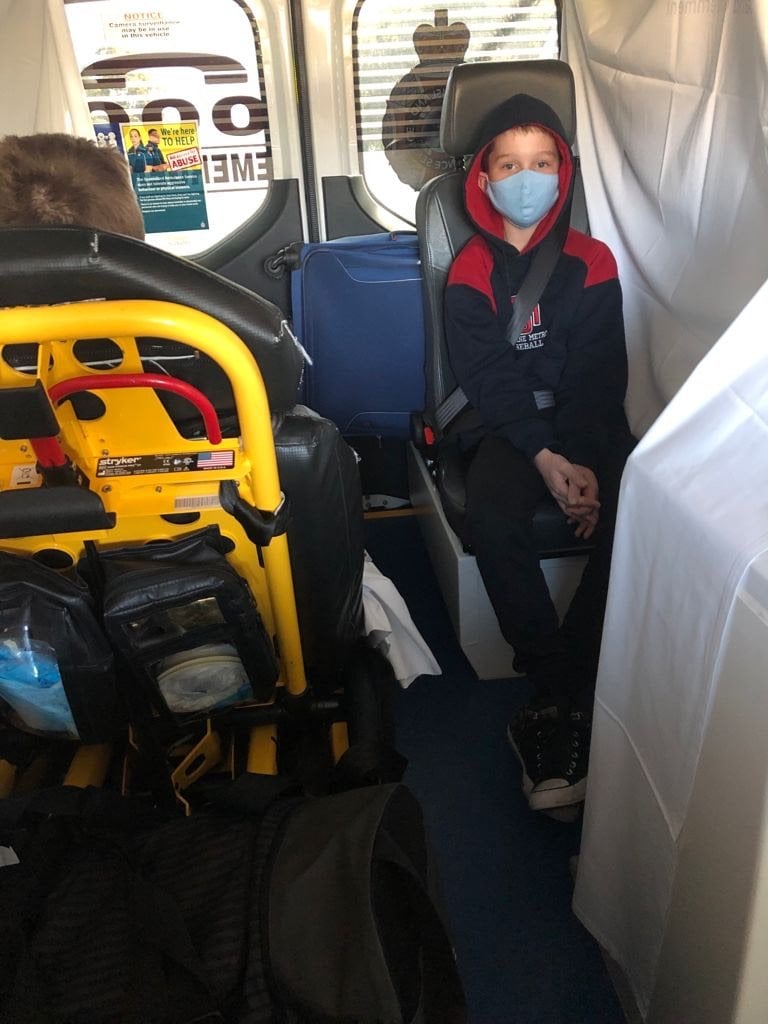 The ambulance ended up arriving six hours after the initial call. Image: Supplied/Jaime.

Up until that point, the Brisbane family hadn't known anyone with the virus and as Jaime told Mamamia, "we kind of felt that we were in a nice little safe bubble here in Brisbane."

Over the next five weeks the family would experience blaming, long periods of confinement and isolation, aggressive phone calls from QLD Health compliance operators, plenty of tears and a swift decline in both the boys and their Dad's mental health. He too contracted the virus after being confined to a tiny hospital room as their carer.

As Jaime explains, "We got this [virus] just living our normal life. We didn't do anything wrong, we didn't cross borders, we didn't go to an engagement party, we weren't in lockdown. But it's made us feel a bit like criminals."

Three days into their hospital stay, the rules were changed in QLD. Queensland Health announced that they weren't going to automatically take everyone into hospital quarantine anymore, as they had previously. They were going to start keeping people at home.

Jaime quickly got on the phone. But it took six more days to get her boys home, and it only happened after she "cried and got mad and really had to do the mama bear thing." Only when the 42-year-old threatened to use Ryan's Rule, a QLD specific process that allows parents to get their child’s care reviewed if they think their concerns aren’t being listened to by hospital staff, did she see real movement. 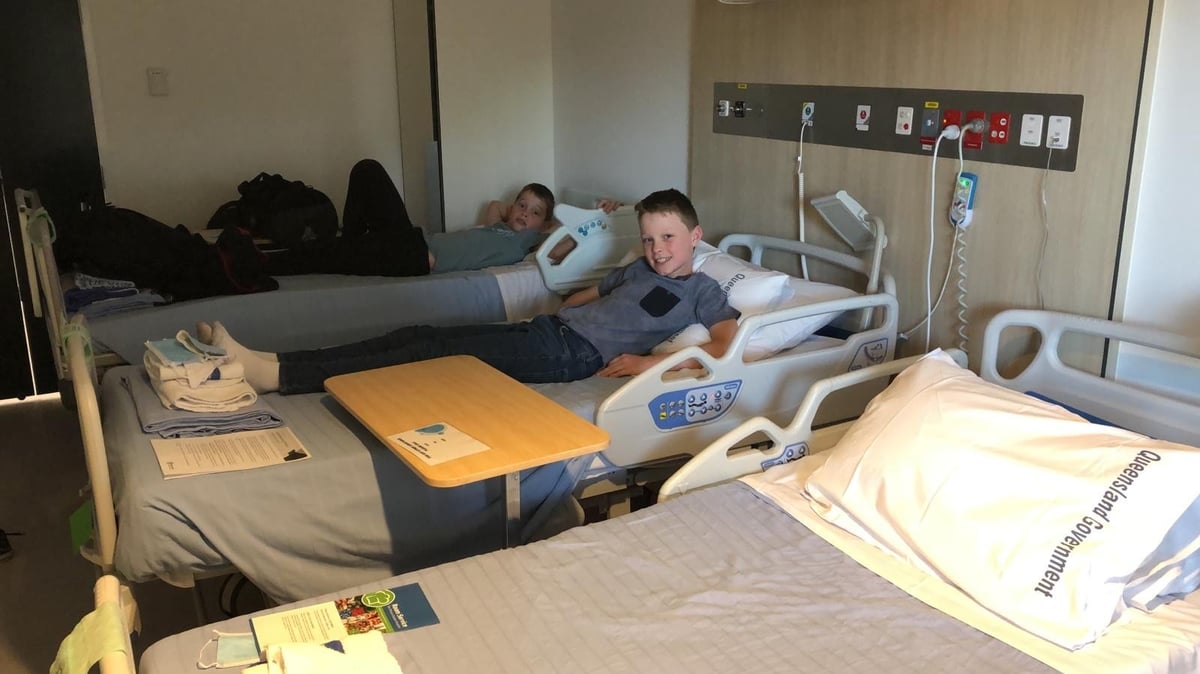 The hospital room the twins and their Dad were confined to after testing positive to COVID in Brisbane. Image: Supplied/Jaime.

"The boys were not coping well at all with the confinement. I had noticed one boy was not really speaking very much...when he was on FaceTime he had resorted to grunting rather than speaking, and he's usually the happier of the two.

"And by that point, my husband had also really declined. He was out of motivation. He was tired. He just couldn't deal with it anymore," she said.

Once home, the boys had to be isolated downstairs in the family home and Jamie wasn't allowed to comfort them as they hysterically cried for their Dad who they'd "left behind."

They'd been worried he would get sicker than the twins (which he did), so they made the decision for him to remain in hospital.

Once he'd improved from the virus itself, Jamie could see that his mental health was still suffering so he too came home. But that meant both she and their daughter had to restart their own home quarantine, since they were in contact with a positive case.

While her husband and the twins are now well and back out living their lives, immune from the virus (for now) and cleared by QLD Health, Jaime and their seven-year-old are counting down until Sunday when they too can leave home, five weeks after they first entered home quarantine.

"Every couple of days we get a phone call from the Queensland compliance department, and they're just very aggressive about 'have you been staying at the place listed on your direction?'. Which I understand, but they have been very forceful and when you're getting these calls every couple of days (and you're doing the right thing), it really starts to drag you down. It's made us feel that we've done something wrong," she told Mamamia.

While they've had a lot of support from friends and family, they've also had some unpleasant interactions in the community.

"The boys got a few messages early on from a couple of kids blaming them for bringing it to the school, and then there were parents who were like 'oh they are back at school already?' when they'd been cleared.

"Another mum I am in contact with, who had a COVID-positive son, has been unable to get an optometrist appointment for him, even though he has now been cleared by QLD Health. Because he [the optometrist] refused to see him."

Jaime says there's a lot of misinformation about the virus in Queensland especially, which has so far been spared a major outbreak like NSW and Victoria.

Read: Claudia caught COVID-19 at the start of the Sydney outbreak. Here's what she's learnt.

"There is this real sort of fear that if you were positive, you're going to be carrying it around and transmitting it to everyone for weeks or months. So we just wanted to sort of get the message out there that once you've had it and you're well and you've been cleared, you're no longer infectious. They have really strict rules up here, so they're not actually going to let us out of the house if they believe we're any sort of risk [to the community]," she said.

At 5am on Sunday morning, Jaime's entire family will finally be allowed outside the house. They've planned a Father's Day horse-riding outing to celebrate. She's also lined up a psychologist to talk to the boys about their experience.

As she told Mamamia, being struck down by COVID, and trying to wade through a system that was not prepared for an outbreak in children, has been hard enough without judgement from others.

"Not many Australians know someone who has had COVID-19 (in Australia), and with so much vilification of COVID-positive people who were doing the wrong thing, I think it's important for Australians to hear about the many, many families who were just going about their usual activities and daily life, who are now are in the midst of an ongoing traumatic experience," she told Mamamia.

Reply
Upvote
You mentioned a friends son was refused a visit to the Optometrist, even though her son was no longer covid positive. Here , in Sydney, Optometrists are not taking routine check up appointments. Only urgent critical care appointments. Rather than deferring this boys appointment because he had covid previously, the Optometrist may have just screened the need for the appointment as non-critical.
F
fitzie99 9 months ago

Reply
Upvote
2 upvotes
I am very grateful to the many families in the “Indooroopilly” cluster, who sacrificed so much for so long. Your actions protected many from dying. I hope your family holds their heads high. My stepfather was separated from his family for nearly 3 years,and put into Auschwitz at the age of 11.He is still alive, and is living evidence that many  people use these experiences to become stronger. May you all be very proud of yourselves.
News
General
Opinion
True Crime
Politics
Sport
Explainer
Entertainment
Celebrity
Reality TV
Movies
TV
Books
Rogue
Royal
Lifestyle
Beauty
Fashion
Weddings
Home
Wellness
Health
Fitness
Travel
Food
Parents
Before The Bump
Pregnancy
Baby
Kids
Teens
School
Parent Opinion
Work & Money
Money
Finance
Career
Lady Startup
Relationships
Sex
Dating
Separation
Friendship
Family
Real Life
Couples