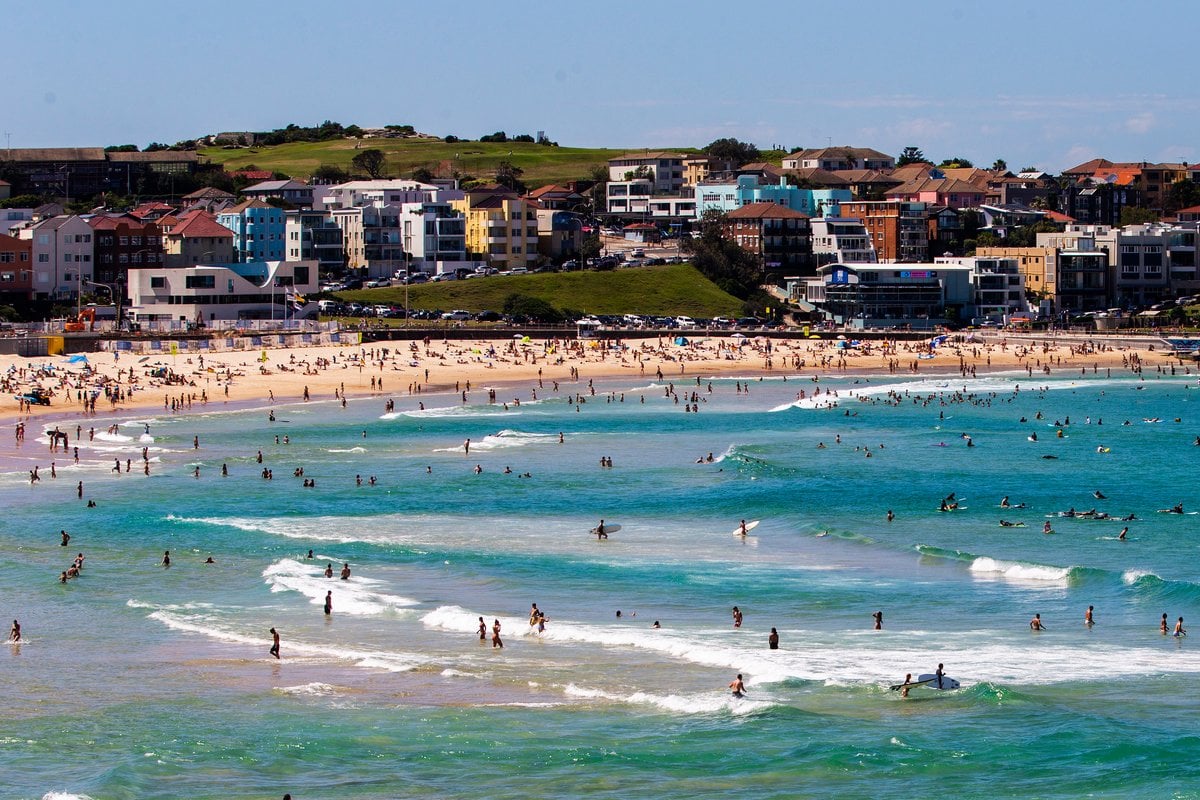 A new locally transmitted COVID-19 case has been recorded in Sydney's Bondi area, with the source of their infection unknown.

NSW Health has issued a new COVID-19 alert, with a list of venues attended by the positive case. Most of the venues are in Bondi Junction and Vaucluse, with another in North Ryde.

NSW Health has been notified this afternoon of a new #COVID19 case who resides in Sydney’s eastern suburbs. pic.twitter.com/EhRW3jHEsL

The Australian Health Protection Principal Committee will convene on Wednesday afternoon to discuss the case.

It's unclear how and where transmission occurred from a couple to another returned traveller who were all staying on the fourth floor of Sydney's Radisson Blu quarantine hotel.

Meanwhile, NSW Health says it administered a record 17,223 COVID-19 vaccines in the 24 hours to 8pm on Tuesday, including 6048 at the vaccination centre at Sydney Olympic Park.

Scott Morrison has hailed a free trade deal with the United Kingdom as the most comprehensive and ambitious in Australia's history.

The prime minister and his British counterpart Boris Johnson announced the deal on Tuesday after sealing an in-principle agreement over dinner overnight.

"I said we would wait for the right deal, and I think we've got the right deal between the UK and Australia," Mr Morrison told reporters outside 10 Downing Street.

"Our economies are stronger by these agreements. This is the most comprehensive and ambitious agreement that Australia has concluded."

The deal will pave the way for more Australians to live and work in Britain and offer exporters more market options.

It will also scrap a requirement for British backpackers to work on Australian farms before extending their visas.

This could create issues for producers who need seasonal workers to pick crops and regional pubs and clubs who rely heavily on working holiday makers.

But the Nationals say they have secured an agreement to guard against labour shortages, which will be separate to the UK trade deal.

Mr Morrison said consumers in Australia will benefit from cheaper products as tariffs on cars, whisky and other UK exports would be eliminated immediately.

"The UK will liberalise Australian imports with 99 per cent of Australian goods, including Australian wine and short and medium grain milled rice, entering the UK duty free when the agreement enters into force."

But import tariffs on Australian beef and lamb will only be fully phased out over 15 years following the urgings of UK farmers concerned about being crushed by cheaper produce from Australia.

"We could have done better": swimming boss.

Swimming Australia's boss says the organisation "could have done better" in handling sexism complaints while admitting deep concern at the tarnishing of the sport.

SA chief executive officer Alex Baumann says the governing body's complaints process could have been better explained to swimmers. But refused to say if there were any current investigations, citing confidentiality within the complaints process.

"We are not going to comment on any individual cases," he said.

"Ultimately we have a confidential process and we have to maintain the integrity of that."

But most swimmers were unaware there were confidential avenues to lodge complaints, which Baumann said was an oversight.

"What I think has happened is we haven't communicated effectively," Baumann said.

"That is what we're trying to address right now. Ultimately they don't have to necessarily come to Swimming Australia."

Australia's Olympic selection trials have been overshadowed by claims of sexism and abusive culture in elite swimming.

The furore was triggered by dual Olympic silver medallist Maddie Groves claiming on social media there were "misogynistic perverts in the sport", which prompted further separate allegations of fat-shaming and abuse of elite swimmers.

Victorians will soon learn if restrictions are to be eased despite a growing COVID-19 cluster at a Melbourne CBD townhouse complex.

Melburnians are still living under onerous restrictions after emerging from lockdown last Thursday including a 25 kilometre travel limit and mask mandate.

In recent weeks, the Victorian government has made a habit of announcing whether regional Victoria and Melbourne would move to more relaxed rules on Wednesdays.

"That would mean the travel restriction, in terms of the 25km, that would go," he said at the time.

But Health Minister Martin Foley said the further potential easing of restrictions from just before midnight on Thursday remained a "day-by-day proposition".

It comes after two residents of the locked-down Kings Park Apartment Complex at Southbank tested positive on Tuesday.

Two further residents of the Melbourne townhouse complex where an aged-care worker and resident have tested positive for the virus now have Covid-19.https://t.co/MIF8myPRgu

The cases will be included in Wednesday's official COVID-19 figures, and brings the number of infected residents to six.

Authorities believe transmission between the two cases occurred in a common area of the complex, which is home to 200 residents. All residents have been asked to self isolate for 14 days.

NSW Health is investigating the source of a COVID-19 case diagnosed in hotel quarantine which has an identical viral sequence to two cases staying in an adjacent room.

The department said on Tuesday night it was unclear how and where transmission occurred from a couple to another returned traveller who were all staying on the fourth floor of the Radisson Blu quarantine hotel.

Genomic sequencing has shown all three cases have identical viral sequences of the Alpha strain (B.1.1.7).

The couple, who were asymptomatic, tested positive to COVID-19 on a routine Day 2 test on June 3, NSW Health said in a statement.

The other returned traveller returned a negative Day 2 test on June 3 before subsequently developing symptoms and testing positive for COVID-19 following a test on June 5.

The three cases were transferred from the Radisson Blu to the Special Health Accommodation, where they remain.

All three cases arrived into Sydney on the same flight from Doha on June 1 and stayed in adjacent rooms in the quarantine hotel.

NSW Health said there was no evidence of further transmission.

A Tamil family detained on Christmas Island for the past two years has been allowed to reunite after the youngest daughter was medically evacuated with her mother to Perth.

Read more: Let's not pretend the decision about the Biloela family is an act of "compassion".

But the family is no closer to returning to their Queensland home in Biloela despite now being allowed to live in community detention in Perth, where Tharnicaa is being treated for pneumonia and sepsis at Perth Children's Hospital.

"This is no big victory. The Immigration Minister's 'compassionate decision' is as temporary as it is sudden." #biloelafamily https://t.co/GUhzvLcGWt

Immigration Minister Alex Hawke is yet to make a decision on whether any of the family members can reapply to stay in Australia.

"Today's decision does not create a pathway to a visa," Mr Hawke said on Tuesday.

"I will consider at a future date whether to lift the statutory bar presently preventing members of the family from reapplying for temporary protection, for which they have been previously rejected."

Mr Hawke said "everyone has compassion towards the ... two beautiful little girls" but granting a permanent visa to the family would "absolutely" start a flood of people-smuggling boats.

After sedating and gassing her grazier partner to inherit his property, Natasha Beth Darcy screamed at paramedics to keep on performing CPR after they declared him to be dead.

But after more than two days deliberations, a NSW Supreme Court jury on Tuesday found the 46-year-old guilty of murdering the sheep farmer.

The 42-year-old was found dead in his bed on his Pandora property in the Northern Tablelands town of Walcha on August 2, 2017.

A woman dubbed 'The Widow of Walcha' is facing life in prison after being found guilty of murdering her partner Matthew Dunbar in NSW.

Natasha Darcy Googled hundreds of way to kill Matthew before sedating him and gassing him to death. #9Today

The couple met on a dating website in 2014, but the Crown contended it didn't take long for Darcy to start pushing for Mr Dunbar to change his will so she would inherit his $3.5 million property.

It also didn't take long for her to start researching ways to kill him, via numerous Google searches on topics including redback spiders, fungi, suicide and "how to commit murder", prosecutor Brett Hatfield said.

She had form, as was revealed in agreed facts relating to her estranged husband, paramedic Colin Crossman.

In 2009, she hit him Mr Crossman on the head with a hammer as he slept and days later sedated him and burnt down their house as he slept.

Referring to a $700,000 life insurance policy on his life, Mr Hatfield said it showed Darcy had a "tendency to sedate and inflict serious harm on her domestic partners for financial gain".

She will face a sentence hearing on October 1.

Businessmen Geoff Cousins has quit the Australian Club and has urged others to do the same after members of the prestigious Sydney institution voted against allowing women to join.

Record turn-out of (male) members to vote NO! to women joining the Australian Club. Warms the cockles. Sounds like a really awesome place. Does any woman actually want to darken this doorstep? https://t.co/uk4NDwRn6J

Cousins describing his horror to The Australian, at the "guffaws and giggling" in the room ahead of the ballot, which was rejected by 62 per cent of the room.

Those who voted against it brought up the fact they'd have to "behave differently at dinner" and "change the decor."

Gone Girl actress Lisa Banes has died 10 days after being injured in a hit-and-run accident in New York City.

The 65-year-old Banes, who was struck by a scooter or motorcycle while crossing a street on June 4, died on Monday at Mount Sinai Morningside Hospital, a police department spokesman said.

Banes appeared in numerous television shows and movies, including Gone Girl in 2014 and Cocktail with Tom Cruise in 1988.

“Gone Girl” actor Lisa Banes has died 10 days after being injured in a hit-and-run accident in New York City. A police spokesperson says the 65-year-old Banes died Monday. She was struck by a scooter or motorcycle while crossing a street on June 4. https://t.co/WIupoDwSl3

On television, she had roles on Nashville, Madam Secretary, Masters of Sex and NCIS.

Her manager David Williams said Banes was hit as she was crossing Amsterdam Avenue on the way to visit the Juilliard School, her alma mater.

Police have made no arrests.

- A New York state judge has ruled that Harvey Weinstein can be extradited to California to face rape and sexual assault charges.

- The former BBC Director-General has apologised to the Royal Family for hurt caused by Martin Bashir's infamous 1995 interview with Princess Diana.

- US health officials have announced a one-year ban on bringing in dogs from more than 100 countries where rabies is still a problem.

Reply
Upvote
1 upvotes
Why would they need to change the decor at this gentlemen's club if they admit women? Or behave differently at dinner? Perhaps we women have been misled about the nature of this club. We think this club is full of businessmen and politicians talking about business and politics, but in reality, it's just a bunch of men in suits chewing with their mouths open, elbows on the table, licking their knives and telling rude jokes. The place is presumably wallpapered with nudie calendars and footy posters (along with the remnants of the mashed potatoes that were flung in last week's food fight).
C
cat a year ago

Reply
Upvote
@rush this is literally exactly what I pictured. It's a club for them to regress to their private school boy days, but with alcohol thrown in.
C
cat a year ago