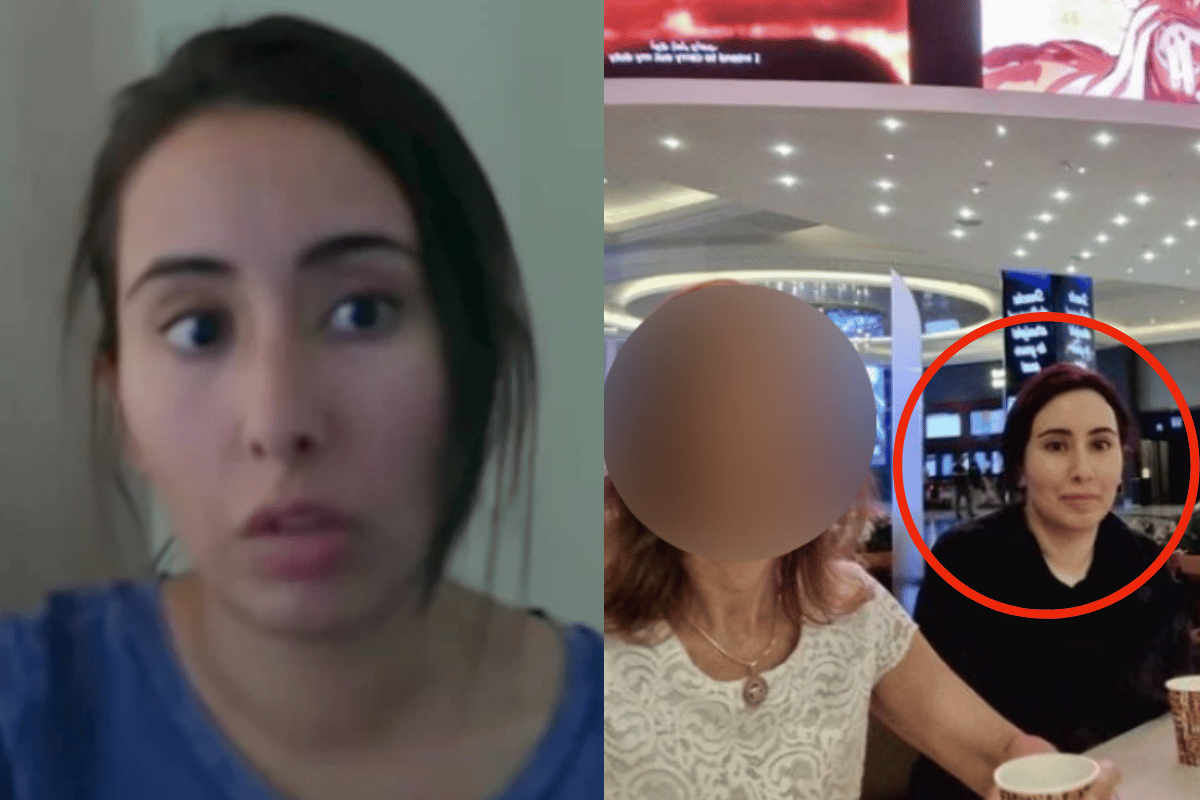 Dubai carefully curates its image to the western world.

And it works: When we think of the United Arab Emirates city we think of glitz, gold and the Burj Khalifa.

Dubai markets itself as a wonderful travel destination. A Gulf city tolerant of Western lifestyles, with a shiny new anti-discrimination law to show off its inclusiveness.

Mamamia’s newest podcast The Quicky spoke to Detained in Dubai CEO Radha Stirling, who was on the phone to Princess Latifa the night she was captured. Post continues below.

But if you chip away at this shiny exterior, Dubai’s hypocrisy starts to show.

Dubai is a really dangerous place for women.

Princess Latifa’s life and the lives of her 30 siblings, particularly her sisters, is far from the privileged life we imagine royals to lead. Oppression, imprisonment, torture.

Princess Latifa escaped from her homeland in March 2018 but less than a week later she was seized by armed men from a yacht off the coast of India, destroying her escape plan and crushing all hope for freedom.

Her family officially denied she fled ill-treatment and instead said she was kidnapped, but what they didn't realise was before she was seized and sent back home, the Princess had released a 39-minute, tell-all video.

In it, she told of how her older sister Shamsa escaped to England but was tracked down, returned to Dubai drugged and imprisoned.

Princess Latifa recounted many stories of alleged capture and torture of women – including her own torture following an earlier attempt to escape when she was 16. She was imprisoned for three years.

She called the public image curated by her father "bulls**t".

"All of this public image that he is trying to portray, human rights, it’s bullshit. He’s the most evil person I’ve ever met in my life. He’s pure evil. There’s nothing good in him."

Detained in Dubai CEO Radha Stirling was on the phone to Princess Latifa when her yacht was attacked off the coast of India.

Radha told Claire Murphy on The Quicky in 2019 that Latifa had contacted her for help before her escape and called her as she heard a commotion on the boat.

"She telephoned me and she was in quite a state of panic and she said 'Rahda, I don't know what's happening. I can hear gunshots outside, I can hear men's voices'," Radha recalled.

"And I said 'Latifa, hide, go into the lower deck bathroom, record what you can - voice messages, videos, whatever you can - and send them to me'.

"Once I told her that, she was very confident; 'okay, I'm on a mission, I'm going to do this,' and she hung up the phone and I saw about 60 seconds later that she was completely offline and I've never heard from her since."

Radha said that for nine months, there was not a word about Latifa's whereabouts. She was thought to have been held in a secret prison.

That was until a damning BBC documentary aired, portraying the UAE and Sheikh Mohammed negatively. Following this, her family released images of Latifa at a meal with former Irish President Mary Robinson.

"We still have grave concerns and we're extremely disappointed that a woman, Mary Robinson who's an ex-UN ambassador in fact and the wife of Shieka Mohammed who is another UN ambassador, that they would circumvent United Nations protocols and try to arrange a private meeting that would basically satisfy the international community and it hasn't, because clearly, from what Latifa said in her video she was seriously abused."

Detained by Dubai's campaign aims to pressure the UAE to allow Princess Latifa the freedom she wanted.

"This isn't going to come easily because we're talking about the Gulf Nations here," Radha said.

"They want to also impress their allies - they're not overly concerned about impressing or appeasing the ideals of the western community. They would look weak for example, if they allowed Latifa to exit the country and be free."

The hypocrisy of these states is dangerous.

"For the past 10 years that our organisation has existed what we have seen is a complete contrast and contradiction in what the UAE and particularly Dubai portrays itself to the international community, that is a modern country that doesn't discriminate against women and doesn't discriminate against gay [people] and allows alcohol, allows Western values and whatever else," Radha explained.

"But what we see is actually the complete opposite."

She pointed to the case of a British woman who was arrested in Dubai after reporting she was allegedly gang raped by two men.

"Women are highly discriminated against and they seriously face legal abuse after they've already been abused or sexually assaulted, and this is the kind of country that's trying to attract tourism and trying to attract investment and the fact is that their legal system is completely medieval."

In February this year, BBC Panorama released videos that were secretly recorded by Princess Latifa, where she said she was being held hostage and was worried about her safety.

Now, two new photos have been shared on a public Instagram account which appear to show Latifa out in public for the first time in years.

In one photo, posted on Instagram last week, Latifa appears to be sitting in the Mall of the Emirates in Dubai with two other women.

While it's not certain when the photo was taken, it's been noted that the cinema in the background is advertising the film Demon Slayer: Mugen Train, which was released in the UAE on 13 May, according to The Guardian.

The BBC said they are unable to verify the photo, however, a friend of Latifa's confirmed to the publication that it is the princess in the picture.

Another photo appears to show Latifa in a Dubai restaurant with one of the two women from the first photo. 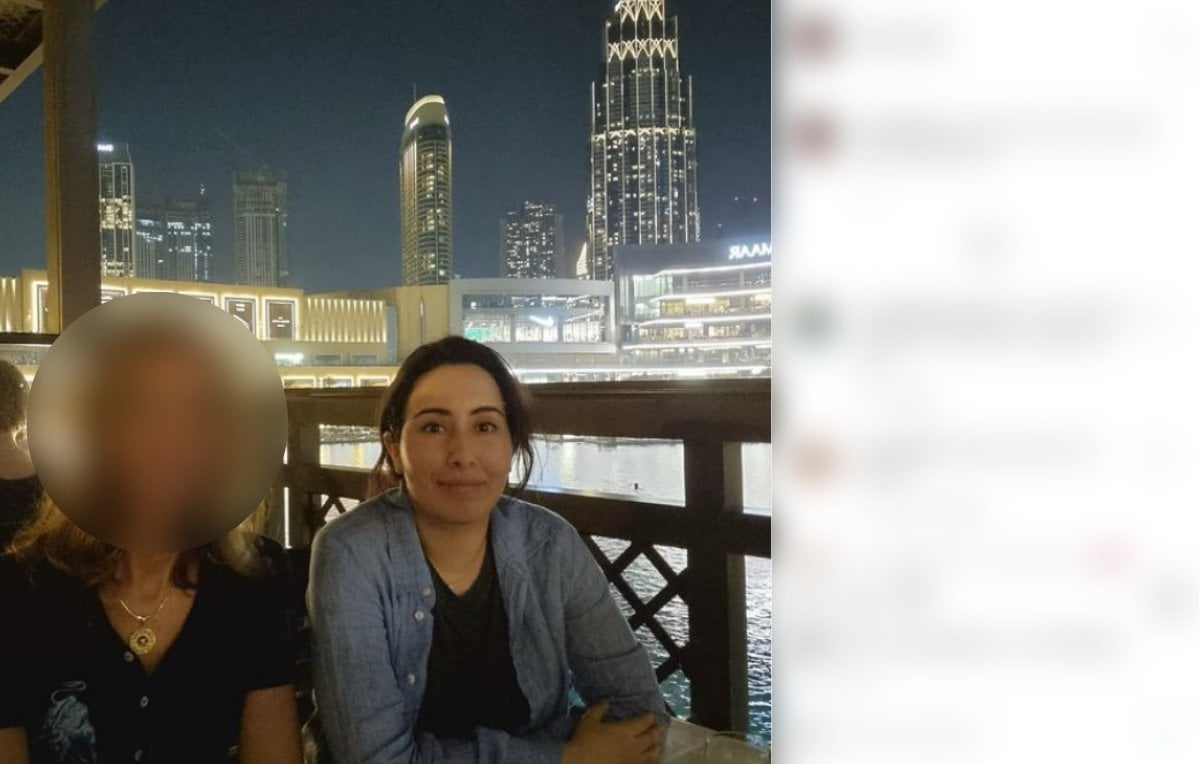 According to the BBC, David Haigh, co-founder of the Free Latifa campaign group, said in a statement: "We confirm that there have been several potentially significant and positive developments in the campaign. We do not intend to comment further at this stage, a further statement will be issued at the appropriate time."

It'd take a pretty breath taking level of wilful ignorance for anyone think the UAE is just sunshine and happiness. It's been pretty well covered for quite some time now.