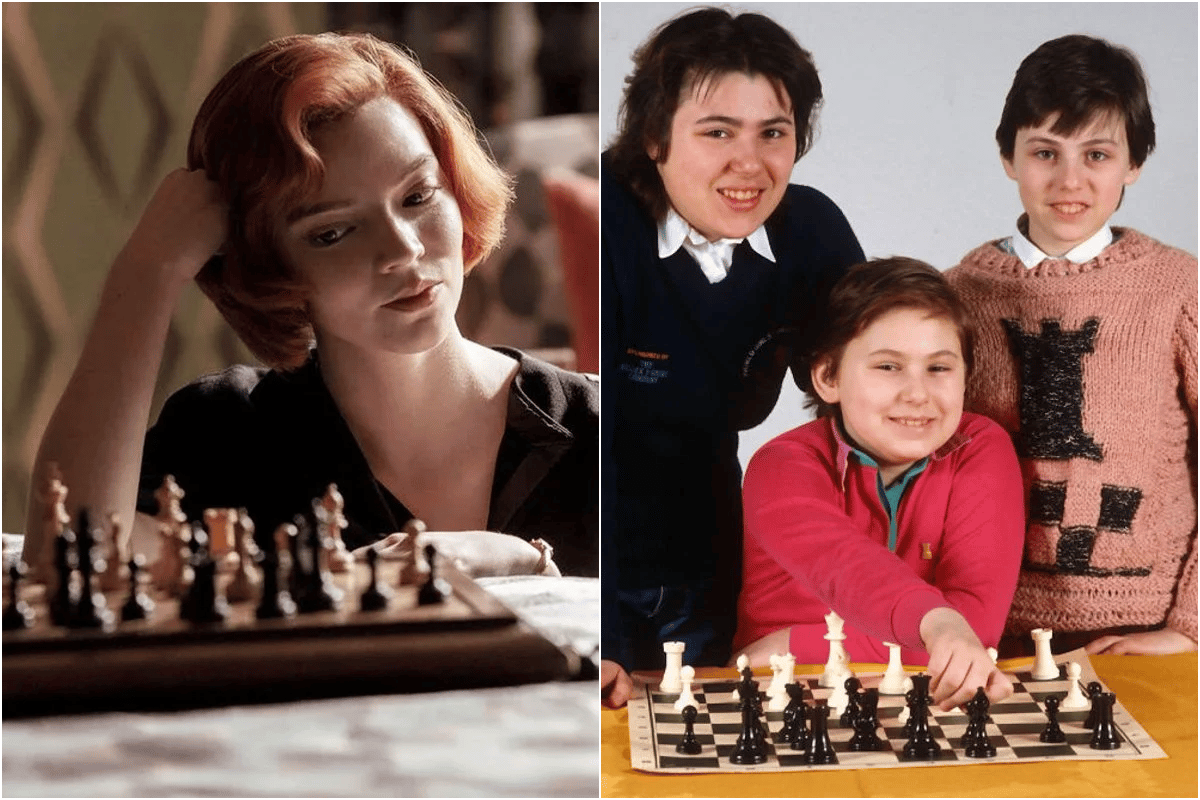 Netflix series The Queen’s Gambit is fiction. There was no gorgeous orphan chess prodigy with addiction issues who took on the male world chess champion in the 1960s.

But there are three sisters who can understand what Beth Harmon went through: Susan, Sofia and Judit Polgar. The trio burst onto the international chess scene in the 1980s, smashing the male dominance of the game when they were only in their teens. In fact, Judit was just nine when she competed in her first international tournament.

So what do the Polgar sisters think of Beth’s story in The Queen’s Gambit?

Watch the trailer for the Queen's Gambit. Post continues below.

"The sexism that she faced seems like it was a picnic compared to what I had to deal with in real life," Susan Polgar told Forward.

The Polgar sisters, who grew up in Hungary, were always destined to be chess champions. Their childhoods were one grand experiment carried out by their father Laszlo, an educational psychologist. Long before he had children of his own, Laszlo had decided that geniuses were made, not born, and he was going to prove it.

"When I looked at the life stories of geniuses, I found the same thing... they all started at a very young age and studied intensively," he said.

While in a long-distance relationship with a Ukrainian language teacher called Klara, Laszlo explained his theory to her and said he just needed a woman who would marry him and have his children.

It was a rather unromantic proposal, but Klara said yes.

The couple’s first daughter, Zsuzsanna (who later called herself Susan), was born in 1969. Laszlo and Klara debated what kind of genius she should be. Maths? Languages? When Zsuzsanna was four, she pulled out a chessboard and asked how to play. Laszlo decided she should be a chess prodigy. He and Klara set up a home-schooling program for her that involved tutoring from top chess players.

"Yes, he could have put us in any field, but it was I who chose chess as a four-year-old," Susan said as an adult. "I liked the chessmen. They were toys for me. Later it was the logic that fascinated me, and the challenge."

Zsuzsanna started playing chess competitively when she was four and a half, and was soon beating adults in Budapest chess clubs.

Younger sisters Zsofia (who later called herself Sofia) and Judit followed the same program as soon as they were old enough. All three of them spent five or six hours a day playing chess. It became an obsession for them. Laszlo told of finding Zsofia in the bathroom late one night, with a chessboard on her knees, and telling her to leave the pieces alone.

By the time Zsuzsanna was 15, she was the women’s world champion in chess.

She became the first woman to qualify for the men’s world chess championship, but was not allowed to play because she was female.

Eventually, because of her, the world chess federation changed its policy, and the championship had the word "men's" removed from its title.

Susan told Forward she was "stunned" that so many people doubted women could compete against men at the highest levels of chess.

"Why? It’s not like a race where physical strength or speed would play the decisive role. This is just about thinking and about strategy and outsmarting your opponent."

It wasn’t just sexist attitudes that she was battling. As she competed against men, she had to deal with everything from physical intimidation (one US champion, 20 years older than her, threw chess pieces at her when he lost) to verbal abuse to unwelcome sexual advances.

Meanwhile, middle sister Zsofia was also carving out a pretty impressive chess record, becoming an international master. As for youngest sister Judit, she won the "unrated" category of the New York Open when she was nine.

At that age, she was still hugging her teddy as she played. Judit was ranked among the world’s top 100 players when she was 12, and became a grandmaster at the age of 15. She was the youngest player – male or female – to achieve those milestones.

Despite following in the footsteps of her older sisters, Judit still faced a huge amount of sexism. When she was 13, chess world champion Garry Kasparov told Sports Illustrated that nature would work against her, "and very soon".

"She has fantastic chess talent, but she is, after all, a woman," he said. "It all comes down to the imperfections of the feminine psyche. No woman can sustain a prolonged battle."

A decade later, after he had lost a game to her, Kasparov changed his mind.

"The Polgars showed that there are no inherent limitations to their aptitude – an idea that many male players refused to accept until they had unceremoniously been crushed by a 12-year-old with a ponytail."

Laszlo Polgar had proven his point. But he wanted to prove it again. Because the chess world was so overwhelmingly white, he wanted to take three children of a different ethnicity and show that he could make them into chess champions too.

"We had a sponsor, a very nice Dutch billionaire named Joop van Oosterom," Susan explained. "He wanted to enable my parents to adopt three boys from a developing country and raise them exactly as they raised us. My father really wanted to do it, but my mother talked him out of it."

All three sisters made careers out of chess. Judit was ranked among the world’s top 10 players in 2005 and is considered the best female player of all time.

Sofia has taught chess. She also illustrated a series of children’s books about chess written by Judit.

Susan is a leading chess coach in the US, and says her teams have won more than all other university teams combined. But she says she still faces sexism.

"Still some male coaches and program directors refuse to shake my hand and congratulate me when we win."