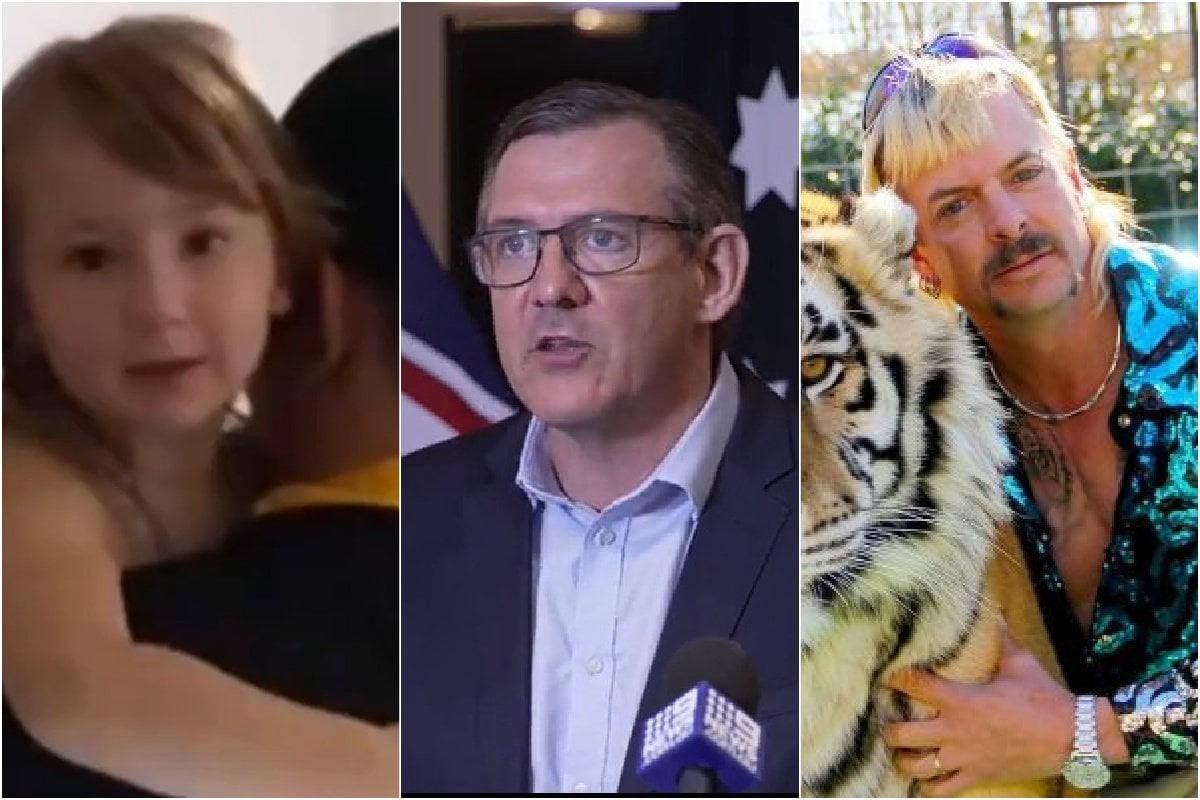 The man accused of abducting four-year-old Cleo Smith from her family's West Australian campsite will return to court next month after being refused bail.

Terence Kelly, 36, appeared before a magistrate in Carnarvon on Thursday charged with various offences including forcibly taking a child under 16.

Kelly, who is alleged to have acted alone, has no connection to Cleo's family and was not on a list of known sex offenders in Carnarvon.

Cleo was found alive and well early on Wednesday, 18 days after she went missing from her family's tent at the remote Blowholes campsite.

The man accused of abducting four-year-old Cleo Smith has been identified. https://t.co/ZLtpZMEBzj

She was rescued from a property just minutes from her family home in Carnarvon, a coastal town almost 1000km north of Perth.

Police forced entry to the home and found Cleo alone in a room, physically unharmed and playing with toys.

Kelly, who is yet to enter a plea to his charges, was arrested on a nearby street around the same time.

Cleo was pictured smiling in the arms of her mother Ellie Smith on Thursday as they travelled to the local police station.

It's understood Cleo was set to speak to specialist child interviewers for the first time.

Homicide detective Cameron Blaine, who was among Cleo's rescuers, said she appeared to be holding up well.

"I can only see her from the outside. But from that point of view, I'm amazed that she seems to be so well-adjusted and happy," he said.

"My name is Cleo." pic.twitter.com/xiy59x4kjP

"It was really heartwarming to see that she's still bubbly and she's laughing.

"She's falling asleep in her mother's arms. There was one occasion where she asked if she could lay next to mum and have Ellie look at her while she fell asleep.

"It's really good to see that she's adjusted, she's getting some sleep, she's playing in the backyard exactly how you would expect."

A Northern Territory town will go into a full lockdown for 72 hours after the Top End's first community transmitted COVID-19 case was detected.

Greater Darwin was set to enter a lockout at midnight Thursday (local time), with only fully vaccinated people permitted to move freely about the community until Sunday.

Unvaccinated people will be locked down after a man in his 20s was diagnosed with the virus in Katherine, 320km south of Darwin.

#BREAKING: The town of Katherine in the Northern Territory will go into lockdown from midnight tonight following one positive COVID case. #9News pic.twitter.com/Kf9aCDPAiy

Chief Minister Michael Gunner said the unvaccinated man had not travelled outside the NT recently and he had contracted COVID-19 locally.

There are currently five exposure sites, including Monsoons nightclub in Darwin and the RAAF base.

All children will be allowed to attend school and sport.

Face masks must be worn by all people in Katherine and Greater Darwin.

Residents of border town Moree will not be able to enter Queensland from Friday after the state recorded three new cases of COVID-19.

All three were in Goondiwindi, with another two people discovered to have been infectious while in the southern border town.

Two of the new cases recently visited Moree in northern NSW and the third is linked to one of them.

Premier Annastacia Palaszczuk says Moree will be declared a restricted border zone area from 12.01am on Friday after 33 cases in the area.

Qld will tighten NSW border zone rules from midnight, incl barring travel from Moree and reciprocating unvaxxed activity, as authorities work to manage a COVID cluster in Goondiwindi, linked to an outbreak centred in the NSW town. https://t.co/gy7ok306n3

"It means residents of Moree will no longer have access across the Queensland border as part of the border bubble except in exceptional circumstances including for the likes of essential healthcare," Ms Palaszczuk said in a statement.

Palaszczuk says Queensland's three cases emerged after 5098 tests in the 24 hours to 6.30am on Thursday.

One is a known household contact of a case, another has been infectious in the community for five days, and a third for four days.

All are women, aged from their teens to their 30s. Two are unvaccinated and one has had her first dose.

Victoria has completely thrown open its border to NSW, even to those not fully vaccinated against COVID-19.

Premier Daniel Andrews and NSW counterpart Dominic Perrottet issued a joint statement on Thursday night announcing the states would open their borders to each other from Friday.

Travel between the two states had already been unrestricted for the fully vaccinated from Monday.

But from 11.59pm on Thursday, all remaining NSW and ACT orange zones were downgraded to green under Victoria's travel permit system.

"This means, for the first time in more than six months in Victoria, all local government areas in all states and territories across Australia will be green zones for the purposes of entering Victoria," the joint statement said.

The change allows all travellers and workers to enter Victoria without any testing or quarantine requirements, including unvaccinated people, if they apply for a permit beforehand to verify they are not COVID-positive or a close contact.

Fully vaccinated Victorians can also freely travel into NSW unless they've been to a place of high concern, but those over 16 who are not double-dosed still cannot for recreation or a holiday.

Vaccines and hospitals on leaders' agenda.

Child vaccines and the capacity of hospital systems to deal with COVID-19 surges will be in the spotlight when national cabinet convenes for the first time in more than a month.

State and territory leaders will meet with Prime Minister Scott Morrison on Friday, the first national cabinet meeting since lockdowns ended in Victoria, NSW and the ACT.

Leaders will be provided with updates on international border arrangements and quarantine measures during the meeting.

Also on the agenda will be an update on Doherty Institute modelling, as well as recommendations from the Australian Health Protection Principal Committee on mandatory vaccines for disability and home-care workers.

It comes as Victorian Premier Daniel Andrews and NSW Premier Dominic Perrottet indicated they would raise the issue of vaccines for five to 11-year-olds.

US regulators have approved the Pfizer vaccine for the age group.

"Hopefully our federal government's doing the same, and they can make announcements quite soon about vaccinating our kids," Mr Andrews said.

The man known as "Tiger King," who gained fame in a Netflix documentary following his conviction for trying to hire someone to kill an animal rights activist, says he has cancer.

"It is with a sad face that I have to tell you... that my prostate biopsy's came back with an aggressive cancer," Joe Exotic, who is being held at a federal US prison in Fort Worth, Texas, wrote in a Twitter post on Wednesday.

Doctors called me in today to break the news that my prostate biopsy came back with an aggressive cancer, Carole Will have her own party over this! Say a prayer everyone & be my voice 😢 love #joeexotic #exclusive #breakingnews #freejoeexotic #justiceforjoeexotic pic.twitter.com/M5wu7fI7a9

The blond mullet-wearing former Oklahoma zookeeper, whose real name is Joseph Maldonado-Passage, is known for his expletive-laden rants on YouTube and a failed 2018 Oklahoma gubernatorial campaign.

He was prominently featured in the popular documentary Tiger King: Murder, Mayhem and Madness.

He was sentenced to 22 years in prison in 2020 after being convicted for violating federal wildlife laws and a failed murder-for-hire plot targeting Carole Baskin, who runs a rescue sanctuary for big cats in Florida.

A three-judge panel for the US Court of Appeals for the 10th Circuit in Denver in July ordered Maldonado-Passage be resentenced to a shorter term, finding that the trial court wrongly treated the two convictions separately in calculating his prison term.

The report says Australia has a history of "greenwashing" aid given to Pacific nations to adapt to global warming, with some funded projects having "no link, or at best a tangential link, to climate change".

The report release coincides with the COP26 climate summit in Glasgow, where Australia has faced pressure from Pacific and other nations to ramp up its target to cut emissions by 2030.

"Australia has a history of using its position as the largest aid donor in the region to influence bilateral and multilateral negotiations on climate change in the region," says the report.

Pacific leaders quoted in the report said Australia had acted to dilute regional climate declarations, most notably at meetings of the Pacific Islands Forum (PIF).

Former Kiribati president Anote Tong said PIF members discussed expelling Australia in 2015 because it was obstructing a consensus on limiting warming to 1.5C.

"It was really clear from the Australians that they saw 1.5 degrees as too much of a sacrifice on their part and would have preferred to see something like two degrees ... because anything less they thought would be detrimental to their economic performance," Mr Tong said in the report.

- A crew member has reportedly died on location in Morocco while filming Indiana Jones 5, starring Harrison Ford and Phoebe Waller-Bridge.

- More than 400 world and business leaders have been slammed for taking private planes to the UN climate conference to preach about the need to cut emissions.

- A New Zealand couple are waiting to hear back from Guinness Book of Records after unearthing a potato weighing almost eight kilograms.

The couple discovered the monster spud when digging a cucumber bed and think it must have self-seeded. They have named it Doug.