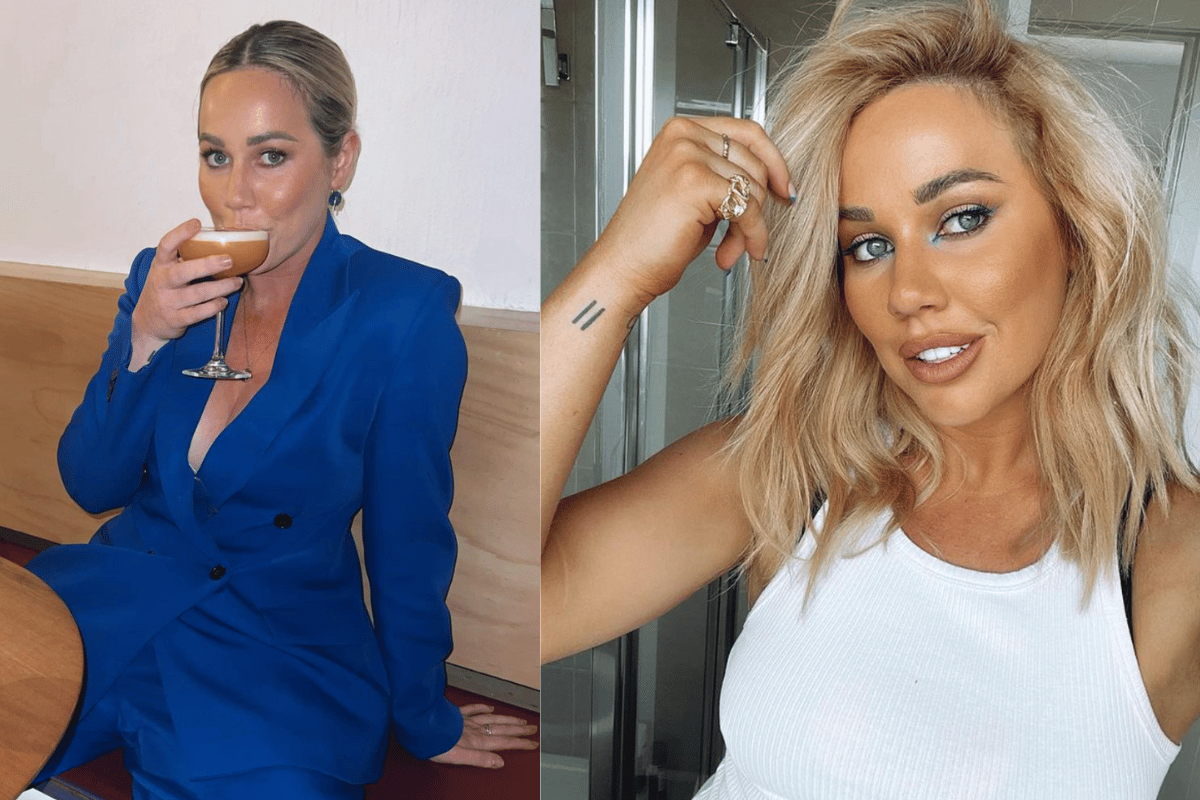 At 28 and married to AFL player Jaryd Cachia, Sophie Cachia first felt a serious attraction to another woman.

"The electricity I felt up my arm when this woman and I shook hands," she tells Mia Freedman on Mamamia's No Filter podcast.

"I vividly remember how strong her handshake was, and I thought, oh, it's like a man's handshake. And then, I saw her fingers. And I saw her arms and veins… and biceps… and I just followed her arm all the way up to her eyes, where I believe I just froze and went… Hello."

It was the moment Sophie says she "instantly" knew she wanted to be with a woman. A few months later, Sophie and the woman kissed.

"Something set fire in me. A kiss with a woman that happened so naturally. So passionate. It was hot. It got things going in my body that I never thought a kiss with a woman [would elicit]. And there was a connection," she recalls.

After separating from Jaryd in 2019, Sophie began dating women for the first time and started to explore her sexuality.

But having sex with a woman for the first time was a learning curve to say the least.

Listen to Mia Freedman's full interview with Sophie Cachia on No Filter. Post continues after audio.

Sophie was initially concerned about how another woman would perceive her naked body. But unlike her sexual experiences with men, Sophie actually felt more comfortable with her female partners.

"The first woman I was ever with, I was thinking 'Oh my god, I'm a mum, I'm broken, I've got saggy this and whatever, she's all fit and toned'. But it's really funny, as all these women taught me that every vagina is beautiful."

Read more: 'Everything went blurry.' Sophie Cachia on the moment she was first attracted to a woman.

One of the first women she had sex with was the same woman who sent electricity up Sophie's arm - the first woman Sophie had been romantically attracted to.

And while at a cafe getting to know one another, their conversation turned flirty. It led to Sophie asking the woman - "how actually do two women have sex?"

"She reached over to my very long, pink, glittery acrylic nails and said to me 'well first of all you're going to have to get rid of these'. I felt so hot and I got fanny flutters, I was sweating and I believe I went home that afternoon and cut off my long pink nails," she says on No Filter.

"I do know now that it is possible to touch a woman's lady parts with nails, you just need to be a little bit more careful. But there is a bit of a joke in the gay community that it's a dead giveaway - short nails."

The first night Sophie and the woman were together, Sophie felt nervous. She didn't know what to do or how to make the other woman orgasm.

"My first few I was very tentative and didn't know what to do. I was a 'virgin' again in this sense."

Reflecting on that first experience with a woman, Sophie says she's "mortified".

"It was generic. I'm not embarrassed about much in my life, but I am embarrassed about that. This woman would have been lying there going 'can this girl hurry up'. But it was my first time ever touching a vagina. Everyone wants something different - and that's where female-to-female sex can be really powerful, because if you match on that energy then it's amazing."

She continued: "Luckily I have that with Maddy my fiancé, we're so in sync. We just had the best sex of my life last night," Sophie says, elaborating further on a bonus episode of No Filter.

"It can and it is a lot more work, but the pleasure you get out of giving pleasure to your partner as a woman is really magical. I will say though that it can work the other way in that vibrators do magical things."

As a 'previously heterosexual' woman, it wasn't until Sophie had experienced a few sexual encounters that she found her groove and confidence.

And one of those formative experiences was with an older woman.

"I had a sexual relationship with an older woman in her 40s who was 'gay from day one' in her words. She really caught me by surprise. I was open to all forms and wasn't opposed to anything," Sophie shares.

The pair were together for two months, and according to Sophie, the sex was amazing given the other woman's level of experience.

"She sort of fell so naturally into this teacher role for me where we were having sex and she would say to me 'it's okay, you can do that or do it harder or maybe try this'. I felt so safe with her, and I do credit that experience so much because once that was finished, my confidence was good and I was ready to go!"

"I really credit that woman for making me feel so comfortable and so free - to make 'mistakes' and ask questions and it was a really great learning experience," Sophie says.

She's now found her person in Maddie Garrick and this year, on Mardi Gras weekend, Sophie proposed to Maddie. And she said yes.

Read more: 'At that stage, she was too good for me.' The love story of Sophie Cachia and Maddie Garrick.

Sophie, who now identifies as sexually bisexual but emotionally gay, says it's been amazing to discover more of who she is and what she wants from life.

"I want to experience life. That's a big thing for me," she tells Mia Freedman.

"It's about abandoning what we think or we're told we should be. And that's what I've done, I've thrown that out the window. I don't think it's bizarre that a woman in her late twenties started finding herself. I think that's actually quite normal. It was a really powerful discovery for me, and to have the love and acceptance that I've had. I've learnt so much about life that is truly so beautiful."