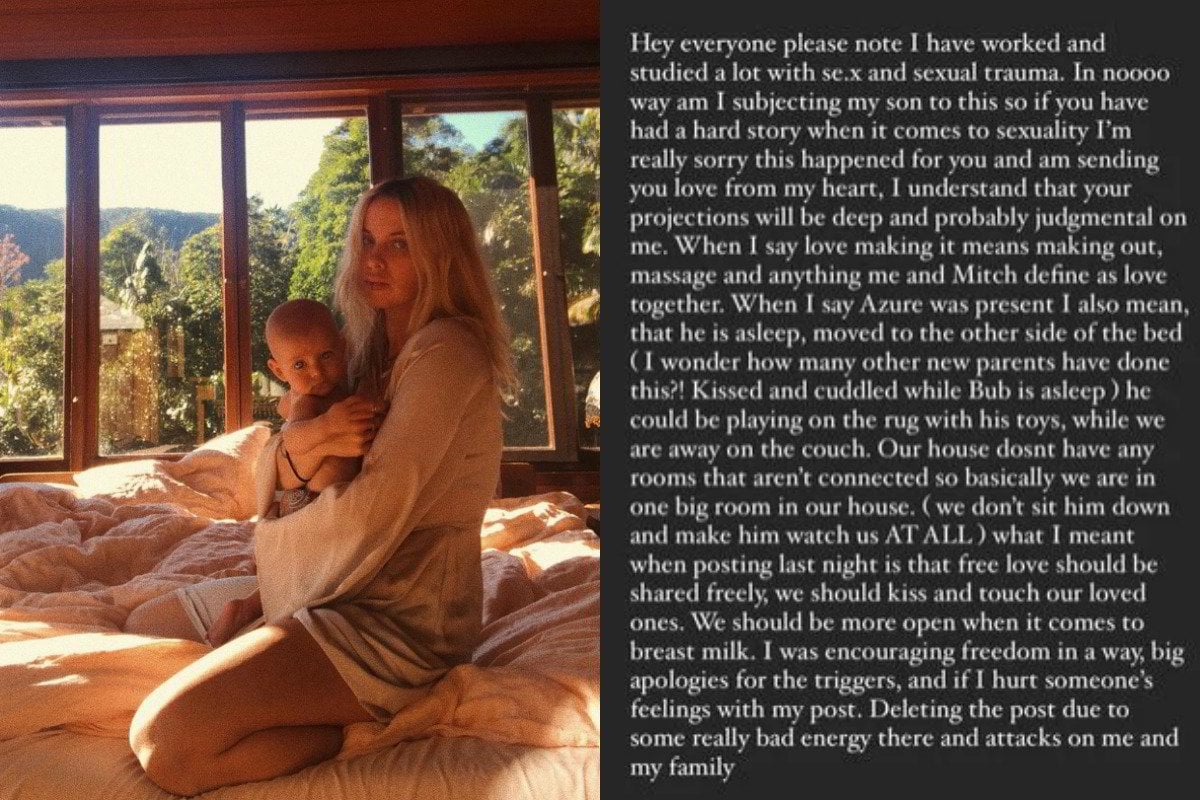 Is it okay to have sex when your baby is in the room? A Byron Bay artist has found out the hard way that a lot of people think it isn’t.

﻿﻿Sally Mustang recently posted on Instagram about “love making” with her husband Mitch Gobel while their five-month-old son Azure was present. But she soon deleted the post due to “really bad energy” and “attacks on me and my family”.

She explained herself: “When I say love making it means making out, massage and anything me and Mitch define as love together. When I say Azure was present I also mean that he is asleep, moved to the other side of the bed… he could be playing on the rug with his toys while we are away on the couch.

“We don’t sit him down and make him watch us AT ALL.”

Mustang said she’d studied and worked with sex and sexual trauma. “In noooo way am I subjecting my son to this.”

The furore over the post raises the question: What do other parents do if their baby is in their bedroom? Do they do it or not? We turned to Mamamia Parents to find out.

Psychologist Donna Cameron believes we need to remember the importance of the parents’ relationship.

“I think in the early months, while the baby’s completely not aware, I’d probably value the relationship and the couple getting back to that intimacy after having a baby as the most important thing,” she tells Mamamia.

She says sex is still a taboo topic, but we need to remember that our perceptions and thoughts are not the same as those of a brand-new infant.

“They don’t have those thoughts,” she says. “They don’t know anything about it yet. So we get nervous of them seeing or hearing something in this infant stage when they’re not even going to know what it is to be harmed by it.”

She says it’s only when children are about three that they might feel frightened if they wake up and see their parents having sex.

“The activity involved in sex might look a little bit scary or dangerous to them, like somebody’s getting hurt. They’ll maybe go, ‘Oh, what’s happening?’ or try to come to one of the parents’ aid. Then it’s about just removing the child, saying, ‘No, no, we’re okay, no one was getting hurt, we were just playing,’ or whatever. They don’t have a comprehension of what sex is so they’re not going to then be traumatised for their future sex lives or anything.”

What do you think? Can people have sex in front of their kids? Let us know in the comments below.