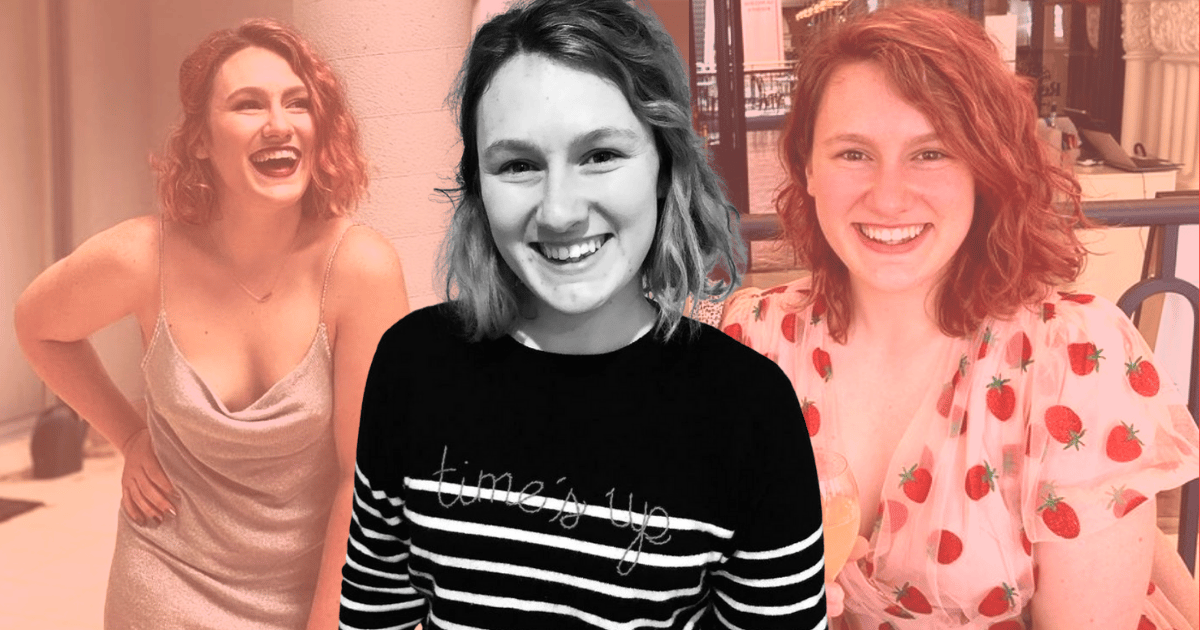 On November 23, 2021, the NSW Government passed their Affirmative Consent Bill through the Upper House, with the new law stating consent must be communicated rather than assumed.

But there’s a woman that catalysed this landmark law reform. And her name is Saxon Mullins.

In 2013, an 18-year-old Saxon says she was led to an alleyway behind a Kings Cross nightclub in Sydney and anally raped by the nightclub owner’s son, Luke Lazarus, a 21-year-old man she had only met minutes earlier.

She was left in serious pain, both physical and emotional, her knees severely grazed from the gravel. From that moment on, Saxon has been a sexual assault survivor.

Now at the age of 26, Saxon has been instrumental in the radical overhaul of sexual consent laws, making it easier to successfully prosecute offenders.

Saxon is now the Director of Advocacy at Rape and Sexual Assault Research and Advocacy (RASARA), a position that has allowed her to ignite major change, she tells Mamamia.

Her advocacy work comes with a personal toll, and it’s a reality many sexual assault survivors know all too well.

Saxon shares her story almost every day in a bid to make a difference. She has come to realise the mental load associated with retelling one's trauma, but amongst the pain, Saxon has found a strength that even surprised herself: that “there is a real power in telling your story”.

Saxon’s court process was arduous to say the least.

Mr Lazarus was initially found guilty of sexual intercourse without consent in 2015, but the NSW Court of Criminal Appeal overturned the verdict and ordered a retrial. The retrial took place in 2017, a judge-only trial finding Mr Lazarus not guilty on the basis of a mistaken belief in consent-based on 'reasonable grounds'.

That ruling was later overturned due to a legal error in the judge’s reasoning, but the Court of Criminal Appeal did not order a third trial, suggesting it would be “oppressive” for the accused.

Saxon says she was incredibly grateful for her family’s support during this time, her loved ones coming with her to the first trial. But it was during the retrial that Saxon made the decision she wished to face it alone, asking that none of her family was in attendance.

It’s not that her family wasn’t supportive. Rather, she didn’t want them to have to hear what had happened to her again.

“I guess I was embarrassed, I didn’t want them hearing this really awful thing described in great detail. When I’m with my friends or my family, we rarely ever talk about those times. It’s just easier,” she tells Mamamia.

When the 2017 retrial was announced, the new judge came to the decision to grant an acquittal. Saxon was three seats away from the accused when the verdict was handed down in Sydney’s small Local Civil Court.

“An acquittal to me is the legal equivalent of saying, ‘we don’t believe you’. It hurt,” Saxon tells Mamamia.

It was also the fact the judge was a female, that made Saxon’s feelings more complicated.

“I was disappointed with how she had characterised me. She took a comment from one defence witness who said she often had this form of sex on first dates and ‘it was normal’. The difference was this defence witness was consenting to these acts: I was not.

“Why was the onus on me, as the person forced into an alleyway with a complete stranger, scared and frozen, to remind him of consent?”

Years on from the court experience, Saxon is now a legal assistance by trade, as well as being the Director of Advocacy at RASARA.

It’s finding a balance between the ‘9 to 5’ job and her advocacy work that has been particularly difficult. Any day that Saxon has taken off in the last few years, has been to do with an advocacy commitment.

“Luckily my direct bosses are really understanding, but sometimes it means logging off early for an interview and logging back on at 10pm with my professional TV appearance makeup on to get my work done,” she tells.

But there’s no denying just how impactful Saxon’s work has been.

Saxon made the decision to remove her anonymity, so that she could tell her story publicly. As while her story was being plastered on newspapers across Australia, it wasn’t Saxon’s face on the cover: it was the accused.

“I’m equally part of this story. This is the trial about my sexual assault.”

Going public with her story not only brought to light the injustices many sexual assault survivors face in the court system, but it also ignited tangible change.

Last week, the NSW Government passed their Affirmative Consent Bill through the Upper House, stating consent must be communicated rather than assumed. It was hearing Saxon’s story that urged the Attorney-General, Mark Speakman, to ask for a review into consent laws.

But the road to reform hasn’t been easy.

Since 2018, there have been countless submissions, roundtable workshops for the NSW Law Reform Commission, various applications, draft proposals, extensive feedback, working with members from across the political spectrum and more. And with her colleagues, including RASARA Executive Director Dr Rachael Burgin, Saxon was determined to make a difference.

The hours they have spent campaigning for reform are astronomical, but the consistent push from RASARA was all about sending a message. “We’re not going to be quiet. This is not good enough.”

“Most people are already engaging in affirmative consent. It’s just bringing that law up to the societal standard,” she says.

This year Saxon received a call from Mr Speakman, saying the government was going ahead to legislate for affirmative consent, a moment Saxon says she will never forget.

“He asked questions, he listened, and he came at it with a lot of knowledge and a genuine desire to learn more. When we found out the reform was going ahead, my colleagues and I were texting each other, saying ‘we did it!’”

Big day lads.
More to say soon but in the meantime, I’ve never been to anything more perfectly timed than the launch of this amazing book Welcome to Consent by @yumichild and @DrMelissaKang on the day of the affirmative consent announcement pic.twitter.com/dMkf8AoYkE

However, as someone who regularly speaks on their trauma as part of their advocacy work, Saxon admits she has good days and bad days.

“It sometimes gets a bit easier. You’re creating those safe pathways in your brain and heart saying ‘Okay, I can retell this story in this certain way’. But there are moments or really tough weeks where the importance of telling my story doesn’t change the fact that it feels very fresh.

“I’ve been talking about my experience all week and my nails are now non-existent, and I’ve been picking at scars,” Saxon tells Mamamia.

For many sexual assault survivors, it can be a challenge putting boundaries in place.

“Something can catch you off guard and be a trigger: it might just be a word, a phrase, something. And you’re right back there, it hits you.”

In the world of advocacy, things run hot and cold. There may be a period of rest, quiet and very little attention or action. And the next moment, Saxon and her colleagues are running full steam ahead. So, balance is pretty hard to come by.

“This stuff just happens so slow or so fast. With years of legal battles, reform discussions and debates and then it’s over.”

But while the momentum is there, Saxon wants to keep going, with her ultimate goal being to end sexual violence: for good.

The big question remains: are our conversations as a collective really changing when it comes to consent?

“I may be just feeling very optimistic this week, but I really think yes,” says Saxon.

“It wouldn’t have been long ago where angry daytime TV hosts or newspaper articles would be belittling this reform, but those voices are growing less and keeping quiet.”

Ironically, Saxon says she has “privilege” when it comes to her case, as it was “very easy to find a villain in my story compared to other ones”.

“We still need to broaden how we talk about sexual assault. It can happen to anyone, and it isn’t just about latching onto the stories like mine with easy-to-find villains: we need to realise that all sexual violence is sexual violence.”

To see more of Saxon and her colleague’s advocacy work visit, RASARA.