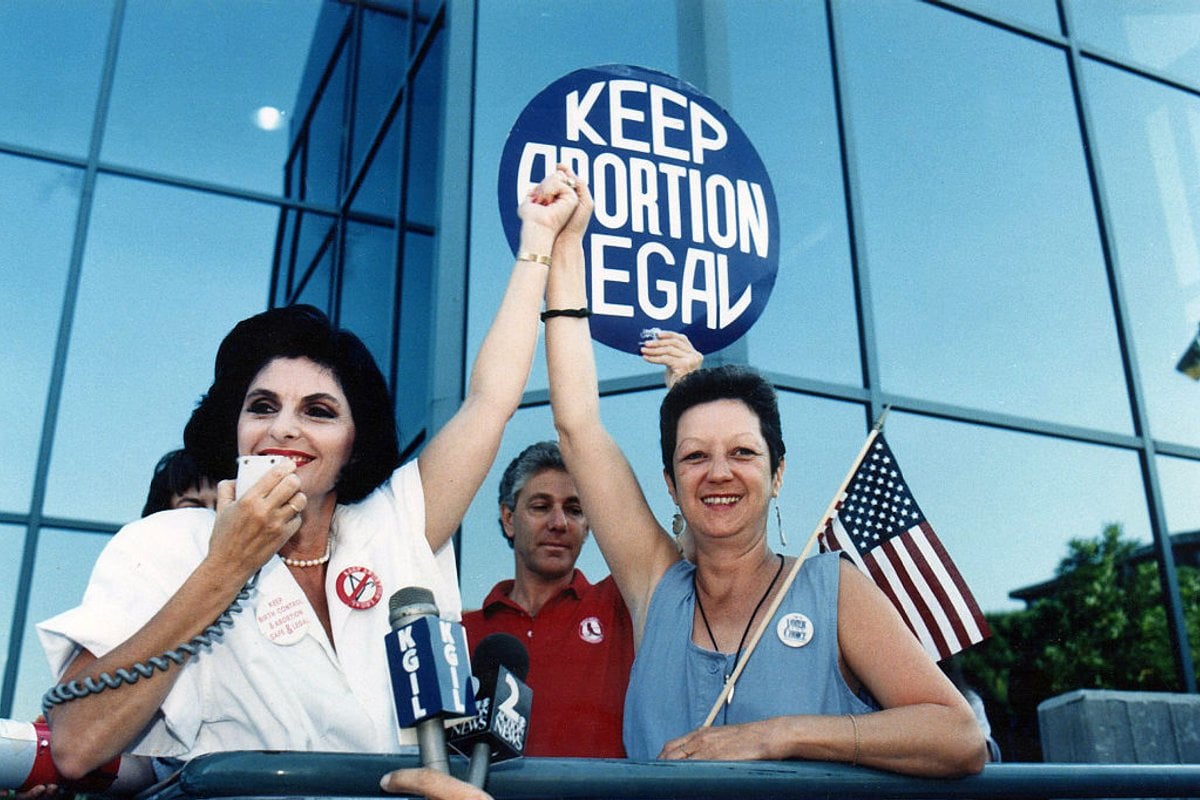 But Norma McCorvey, the “Jane Roe” of the case, never got the abortion she wanted. Instead, she had the baby and gave her up for adoption.

In Joshua Prager’s new book The Family Roe: An American Story, Shelley reveals how she felt when she found out who her birth mother was and what happened when they finally spoke.

Norma had a tough upbringing.

Her father Olin was mostly absent and her mother Mary admitted to Vanity Fair that she “beat the f**k” out of her.

Norma spent years in reform school and, even though she identified as a lesbian, got married to a man at 16.

That marriage was abusive and didn’t last long, but resulted in the birth of her first child, Melissa, who was adopted by Mary. Norma later claimed her mother tricked her into signing the adoption papers.

Norma had a second child, Jennifer, who she gave up for adoption.

She wanted an abortion. She said she had been raped – hoping to boost her chances of getting an abortion – but later admitted the relationship, with a married man, had been consensual.

Norma, who was living in Texas, couldn’t afford to travel to one of the few states where abortion was legal.

Someone pointed her in the direction of two young lawyers, Linda Coffee and Sarah Weddington, who were looking for a test case so they could challenge the Texas abortion laws. Norma fit their needs. But the process moved slowly.

When Norma realised that the laws wouldn’t change in time for her to get a legal abortion, she was furious.

“I was nothing to Sarah and Linda, nothing more than a name on a piece of paper,” she wrote in her 1994 book I Am Roe. “And without them, without their damn legal abortion, my soul was trapped and my body was in jail.”

Seven months pregnant, Norma couldn’t go back to her usual work as a waitress.

“After each rejection I came home, got drunk, and pounded my fists into my belly in frustration.”

Norma gave birth to her third child in 1970, gave her up for adoption, and soon afterwards, started a relationship with Connie Gonzalez. They would be together for 35 years.

The baby was adopted by Ruth Schmidt and Billy Thornton, and called Shelley Lynn.

She grew up knowing she was adopted, and that she had two older half-sisters, but not having any idea who her birth parents were. At the age of five, she decided Elvis Presley was her dad and Ann-Margret was her mum.

Ruth loved being a mother, but Billy, who already had six children from four previous relationships, developed a drinking problem. The couple fought a lot, and Billy walked out when Shelley was 10.

In her teens, Shelley suffered anxiety and depression. Later, she decided that dated back to before she was born.

“When someone’s pregnant with a baby, and they don’t want that baby, that person develops knowing they’re not wanted,” she said in an excerpt from The Family Roe published in The Atlantic.

Shelley wanted to become a secretary, because she thought it was a steady job, and she wanted a partner who would stay with her for life.

Norma, meanwhile, was getting more involved with the pro-choice movement. 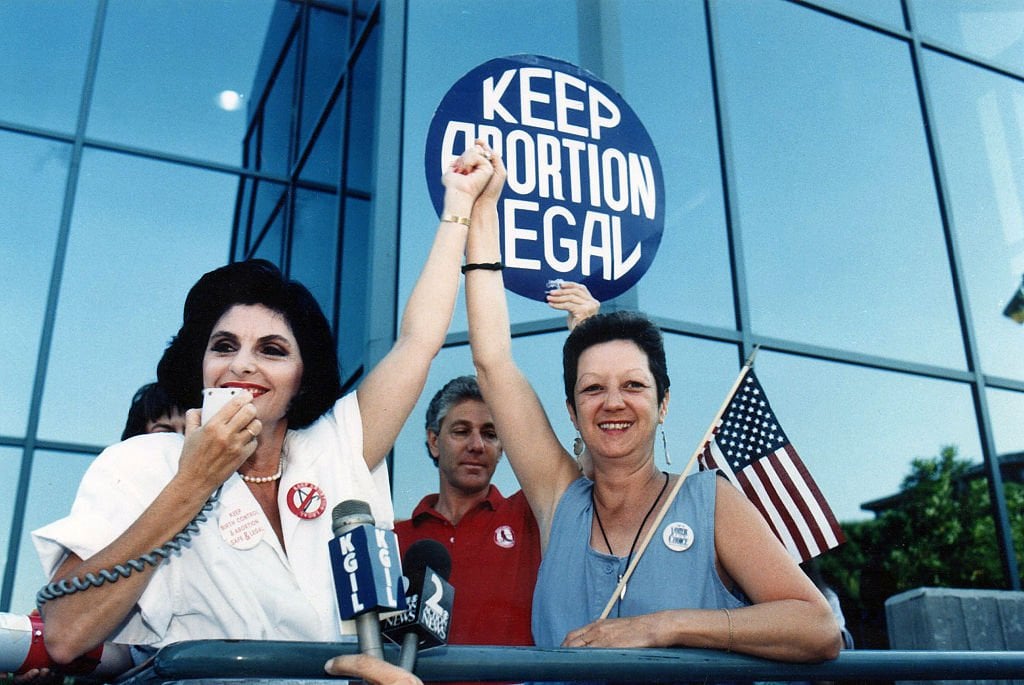 She went on Today in 1989, telling host Jane Pauley that she wanted to track down the baby she had given up for adoption. The National Enquirer saw a good story, and offered to do it for her.

Shelley was 18 when a woman sent by The Enquirer broke the news to her that her mum was Jane Roe.

She’d seen a movie about the Roe v Wade case, so she knew the story. She started crying and shaking.

Asked if she was pro-life or pro-choice, she didn’t know what to say, feeling pressured.

The Enquirer set up a phone call between Norma and Shelley, and Norma wanted to meet, but Shelley didn’t want a reunion in the pages of a tabloid. In the end, the story ran without naming Shelley.

“I’m glad to know that my birth mother is alive,” she was quoted as saying, “and that she loves me – but I’m really not ready to see her. And I don’t know when I’ll ever be ready – if ever.

“In some ways, I can’t forgive her… I know now that she tried to have me aborted.”

Shelley met an older man called Doug, and they made plans to marry. She fell pregnant, unexpectedly, and found herself rethinking her feelings about abortion.

“I guess I don’t understand why it’s a government concern,” she said.

She kept the baby, a boy, and became a stay-at-home mum. She was determined that her son should never feel “a burden or unloved”.

In 1994, Norma wanted to visit Shelley, with Connie. Shelley told her she hoped the two women would be “discreet” in front of her young son.

They ended up arguing, with Norma saying that Shelley should thank her for not aborting her. Shelley was shocked.

“I was like, ‘What?! I’m supposed to thank you for getting knocked up… and then giving me away.’ I told her I would never, ever thank her for not aborting me.”

Shelley had two more children. She suffered depression. She followed the news of Norma, who went from fighting for abortion rights to fighting against abortion, when she was befriended by Reverend Flip Benham, who baptised her in a backyard pool.

"I don't believe in abortion even in an extreme situation,” Norma said in 1998. “If the woman is impregnated by a rapist, it's still a child.”

In 2013, Shelley finally got to meet her half-sisters Melissa and Jennifer. They had all longed to be reunited. Melissa had known Norma growing up, and Jennifer wanted to get to know her. Shelley wasn’t sure.

The three looked different, having different fathers, but all shared the same view on abortion. They were pro-choice.

Four years later, when Norma knew she was dying, she revealed in the documentary AKA Jane Roe that she only joined the anti-abortion side because she’d been paid to do it, saying she was “a good actress”.

“If a young woman wants to have an abortion, fine!” she added. “You know, that’s no skin off my ass.”

When Norma was right near the end, lying in a Texas hospital, attached to tubes, Melissa called Shelley, to see if she wanted to meet her face to face.

Shelley still wasn’t sure. And then it was too late.