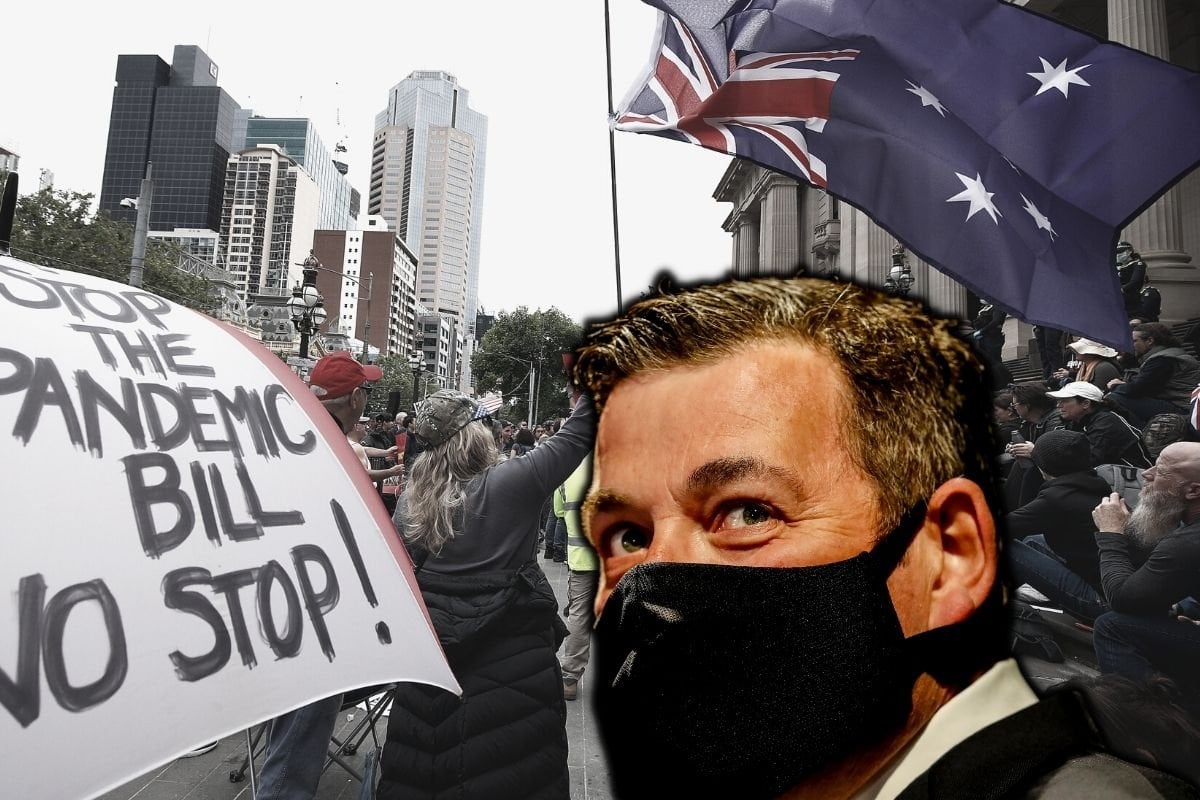 I've seen signs calling for him to die.

I've seen an inflatable doll depicting him thrown from a structure.

I've even seen a carefully crafted noose made just for him. And a makeshift gallows.

Watch: Daniel Andrews responds to the threats against him and his family. Post continues after video.

These were all visible and prominent additions to the demonstrations outside the Victorian parliament this week, as hundreds protest against the state government's controversial pandemic bill that aims to give the state's premier and health minister the power to declare a pandemic and make public health orders without putting them to parliament.

To protest is an Australian right. An integral part of our democracy. But what's happening in Melbourne right now is not constructive or helpful.

As soon as you bring violent death threats and barbaric torture devices into your argument, you've lost. You've cannibalised your legitimacy.

As Samantha Ratnam, Leader of the Victorian Greens, wrote on Twitter, "The thousands of emails I’ve received in recent weeks have demonstrated a very genuine fear. And I understand that people are scared...

"But what I’ve noticed is that almost every email or phone call or social media message has contained some form of misinformation or conspiracy theory; a gross misrepresentation of the bill we’re debating. And this is something the campaign to oppose this bill has to answer for."

I just spoke to the pandemic bill in the Upper House and had a few thoughts I wanted to share here about the campaign *against* the bill.

The thousands of emails I’ve received in recent weeks have demonstrated a very genuine fear. And I understand that people are scared.

There is a portion of Victorians protesting because they are concerned politicians in their state will be awarded too much power under this proposed law, which looks to replace the 'state of emergency powers' that have been used for the past two years to wrangle the COVID-19 pandemic.

The main concerns include the premier being able to declare a pandemic without putting it to parliament, the transfer of emergency powers to the health minister from the chief health officer, targeted health orders based on vaccination status, and the ability to extend the powers indefinitely.

The bill is still being debated, and various amendments are being discussed to alleviate these fears and improve accountability and transparency concerns.

What's not fine are the other people in these protests fuelled by misinformation and anti-vaccine hatred. They're accusing Premier Andrews of being a dictator who is trying to control people and introduce an 'apartheid regime'.

Peaceful protest is a fundamental right in our democracy. The violent images on display in Melbourne have no place and should be condemned by all political leaders.

That is an insult to the victims of those regimes and the horrific atrocities they faced. There is no comparison, and to suggest that there is demonstrates either a lack of understanding in history or a warped sense of reality.

Not only that, they are protesting in a way that's vulgar, violent and terrifying for not just the politicians, but their families.

There is a difference between wearing fur covered in red paint to signify blood (a popular tool used by animal rights protesters to attract attention), and wishing death on a politician with a custom-made noose.

As Daniel Andrew's wife wrote on Twitter this week, "We are reminded that the light shines in the darkness and the darkness will not overcome it."

We have received so many beautiful messages today from all over. Thank you. We are reminded that the light shines in the darkness and the darkness will not overcome it. As ever #IStandWithDan #GoHigh

Her fears of the darkness are not unfounded.

We've seen hundreds of people arrested and charged over violence at COVID-19 related protests across most Australian states and territories, but particularly in Victoria.

Like Daniel Andrews, WA Premier Mark McGowan and his staff have also been receiving threats over his government's pandemic choices, so much so he's been forced this week to close his electorate office.

"Someone turned up with an armoured car with a machine gun on the top."

In September, a man was found guilty of threatening Queensland Premier Annastacia Palaszczuk and Chief Health Officer Jeannette Young after he sent them multiple messages promising to "wipe [them] from the face of the earth".

Counter-terrorism officials have already charged one Victorian man who encouraged anti-lockdown protesters to bring firearms to state parliament and execute Andrews, and as protests continue, investigations into other alleged extremists involved in the demonstrations continue.

Chaotic scenes have been playing out in Melbourne over the past few months; mass protests over lockdowns, vaccine mandates, and construction shutdown have brought the CBD to a standstill. Now, Victoria’s proposed pandemic laws have again taken things up a notch.#TheProjectTV pic.twitter.com/TGTMTNMyS1

What have we become?

In the UK, two MPs have been murdered in the past five years - MP Sir David Amess was stabbed multiple times at a church just last month, and MP Jo Cox was killed outside a library in 2016.

Is this the kind of brutality we're headed towards?

Chant "kill the bill" all your like. Gather outside parliament if you must. But leave personal, violent, horrendous personal attacks out of it.

What we're seeing in Melbourne right now are legitimate concerns being railroaded by loud and proud extremists.

At the end of the day, the Victorian government is trying to work out how to make sure their laws and legislation stand up in the face of future pandemics. To make sure they are robust, and effective and have their citizens' best interests at heart.

Fight for your rights in that discussion, but fight fairly. This is getting out of hand.

Reply
Upvote
2 upvotes
This is an absolute disgrace and what has our so called Prime Minister done about it? Nothing of course. People of Melbourne he lies through his teeth about things to you and  that's ok, but the man who is trying to help you idiots gets this sort of treatment.
K
kb1 2 months ago

Reply
Upvote
10 upvotes
Having lived through the irrational and dictatorship style handling of this pandemic in Victoria for two years. This bill is absolutely terrifying! The things that have been passed on other issues during the “state of emergency status” that Andrews and his government have had really really affects the average Australian and because of this status they have been able to be passed without full sittings in parliament and people have not been able to protest (due to being thoughtful citizens who choose to be abiding by the pandemic rules) not even our local members of parliament have been able to reject or vote on some of these decisions. So this is the broader terror we are all feeling around this bill. People are scared and deeply concerned due to all of the corruption that has been going on under guise of “the pandemic” because when there is something this big across every aspect of media you can get away with just about anything in the parliament!
L
laura__palmer 2 months ago

Reply
Upvote
3 upvotes
@kb1 So threatening harm and death on Dan Andrews is okay because you don't agree with the bill?
S
sarah 2 months ago

Reply
Upvote
5 upvotes
@laura__palmer No one agrees that Andrews should be threatened.
However, people have a right to peacefully protest the Bill.
Remember, many many Victorians, especially children, mothers who home schooled children and businesses are not Ok and have suffered immensely because of many failed Andrews' policies and now he wants even more power.
M
mamamia-user-482898552 2 months ago

Reply
Upvote
2 upvotes
@kb1 What aspects exactly about this bill are so "terrifying" to you? Details and facts, not conspiracies, please. I'm also interested to hear what you think was so "irrational" about Victoria's handling of the pandemic - which, incidentally, saved countless lives.
Gallows and death threats are not "peaceful protests". Not sure why you are citing people's rights to "peacefully protest". That issue is not in contention.
L
laura__palmer 2 months ago