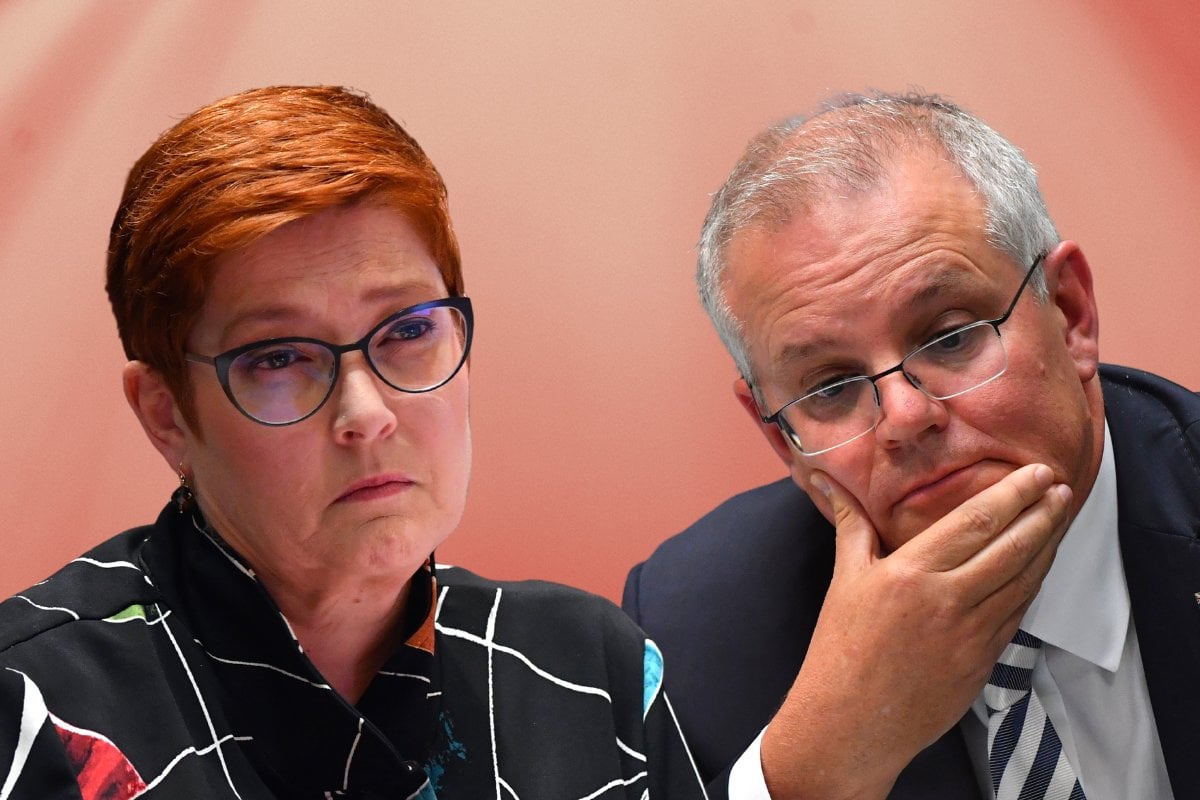 On Monday, Prime Minister Scott Morrison announced his revamped cabinet, a highly anticipated shuffle to lift his government out of a crisis over the treatment of women.

The number of women in cabinet has been restored to seven and a new ministerial task force has been established to deal with women's equality, safety and economic security.

There's plenty to talk about; Morrison said it will provide a much-needed shake up to the ministry and provide a fresh lens to achieve change for women, but he's also been criticised for putting the job security of his colleagues ahead of the country, given embattled ministers Christian Porter and Linda Reynolds are both staying in cabinet in new roles.

All interesting, worthy conversations, overshadowed by another awkward, off-the-cuff gaffe from the man running the country.

In discussing the cabinet task force, Morrison said it would include all female members of the ministry as well as himself, Treasurer Josh Frydenberg, Finance Minister Simon Birmingham and Deputy Prime Minister Michael McCormack.

He was questioned by a journalist.

"Aren't you the women's prime minister?"

Morrison said his point was "misunderstood" and "of course I'm prime minister".

"What I'm trying to bring together is a team of ministers and Marise Payne as minister for women can bring all that together as a leader of that portfolio team," he said.

The damage was done.

Even Peta Credlin on Sky News was furious.

"I want the PM of my country to be the PM for women as much as the PM for men. I don't know why, but the PM keeps making these fundamental mistakes on women," she said.

Over on ABC's The Drum, Jane Caro had the perfect metaphor for the frustration so many women are feeling.

Morrison keeps saying he's listening. But when he goes off-script, he continuously makes mistakes. He's painting by numbers, trying to finish the painting without really stopping to look at what it is.

"It's a very bizarre remark and again, kind of tone-deaf as to what it is that women are trying to get from this government," Caro said.

"It almost smacks of him pushing the 'girly business', the women's business, 'here you are ladies, you can look after this messy stuff, and us blokes can get on with the serious stuff' ... It's as if he's colouring by numbers instead of getting what people are trying to say to him viscerally."

"It almost smacks of him pushing the 'girly' business to the women - 'here you go ladies, you look after this messy stuff, and us blokes can get on with the superior stuff'. It won't cut it." #TheDrum pic.twitter.com/U1YyQmcCYT

The prime minister is not meant to delegate the 'women's stuff' to someone else.

The prime minister's job is to represent all Australians, and women happen to be more than half of them.

What Morrison's remark fails to understand is that sexism, toxic workplace culture, assault and harassment are not exclusively women's issues.

They impact women in huge numbers, yes. Women endure so many of the consequences, but we alone cannot solve the problems which are, mostly, created by men.

Women have been carrying these issues - taking precautions for our own safety, overthinking our communication, staying quiet as to not make men uncomfortable, etc. etc. etc. - our whole lives.

Women need buy-in from men to move the conversation beyond platitudes and symbolism and into real systemic change.

We especially need buy-in from the man leading the country.

The prime minister for women is not a real job title. Yet Minister Payne (who did not attend the women's March 4 Justice, despite her portfolio) now finds herself tasked with 'leading' half the population without the status and paycheck of the actual PM.

L
lachy8 a year ago

Reply
Upvote
4 upvotes
When will people realise this oaf has no idea what he is doing.
G
gypsy a year ago