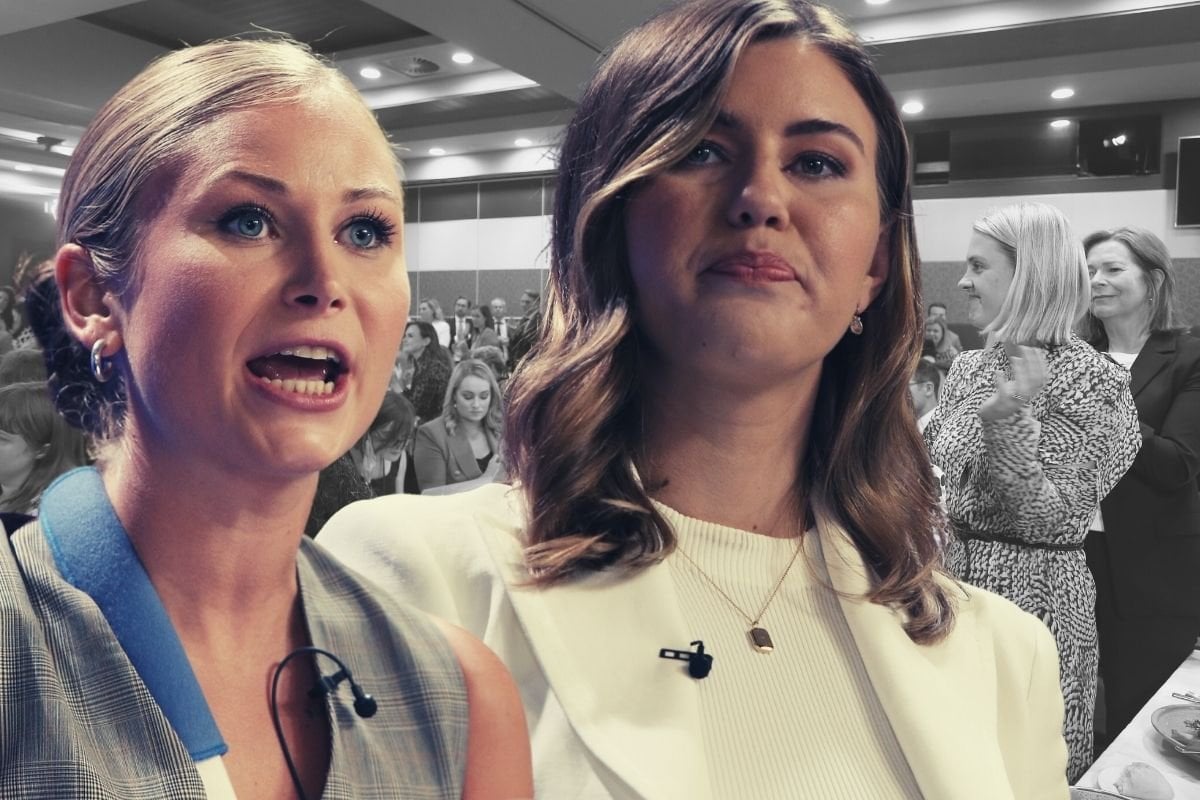 The reaction to the speeches given by Grace Tame and Brittany Higgins at the National Press Club on Wednesday has been described by those who were there as "shell-shocked."

But you didn't even have to be in the room to feel the visceral, palpable cogs of history being written as their words were broadcast across Australia.

It was jaw-dropping. Awe-inspiring. Emotional.

It was two women refusing to soften, or fall-back or sit down.

Watch a snippet of their speeches. Post continues after video.

Their words and their faces are dominating headlines today because they refused to play by the rules.

They made us feel uncomfortable. They weren't afraid to call out the structures and politicians in charge. They shared their unfiltered opinions with bravery, dignity and strength.

There was anger and fury in their words. Anger and fury that so many of us feel as we watch the snails-pace progress our country is making towards real change for women.

Of course there are so many women who've spoken up before them. Grace and Brittany are the culmination of generations who've laid the ground-work. Who made it possible for them to stand up there in front of the nation and dismantle an archaic institution that has always been misogynistic.

It feels like everyone at the press club is a bit shell shocked, and so they should be.

They made sure they used that televised lunch event as a launching pad, making so much noise it was impossible for those in charge to ignore.

A year ago, almost to the day, Brittany went public with the allegation she'd been raped on a couch in Parliament House. Her story sparked a March4Justice and a national moment of reckoning. For generations, women have fought against inequality. That moment was outrage at it all; the horrendous number of women killed by men, the lack of safety, the gender pay gap, and inequality in business, boardrooms and bedrooms. Women had had enough.

Brittany was inspired to speak up after hearing Grace Tame tell her story as she was awarded the 2021 Australian of the Year. Grace was groomed, stalked and repeatedly raped by her teacher when she was a minor, and then fought a complex legal system that allowed her abuser to tell his side of the story while she was silenced.

These women have been through extreme trauma.

And after using their voices, and banding together to tell their stories and advocate for change at great personal cost, they watched politicians and commentators and systems do what they've always done in the 12 months that followed: very little.

"I stand here today fearful that this moment of transformative potential, the bravery of all those women who spoke up and stood up and said 'Enough is enough' is in danger of being minimised to a flare-up, a blip on the radar, a month-long wonder in the national conversation," Brittany said in her speech.

"Or, worse, just a political perception problem neutralised and turned into a net positive." 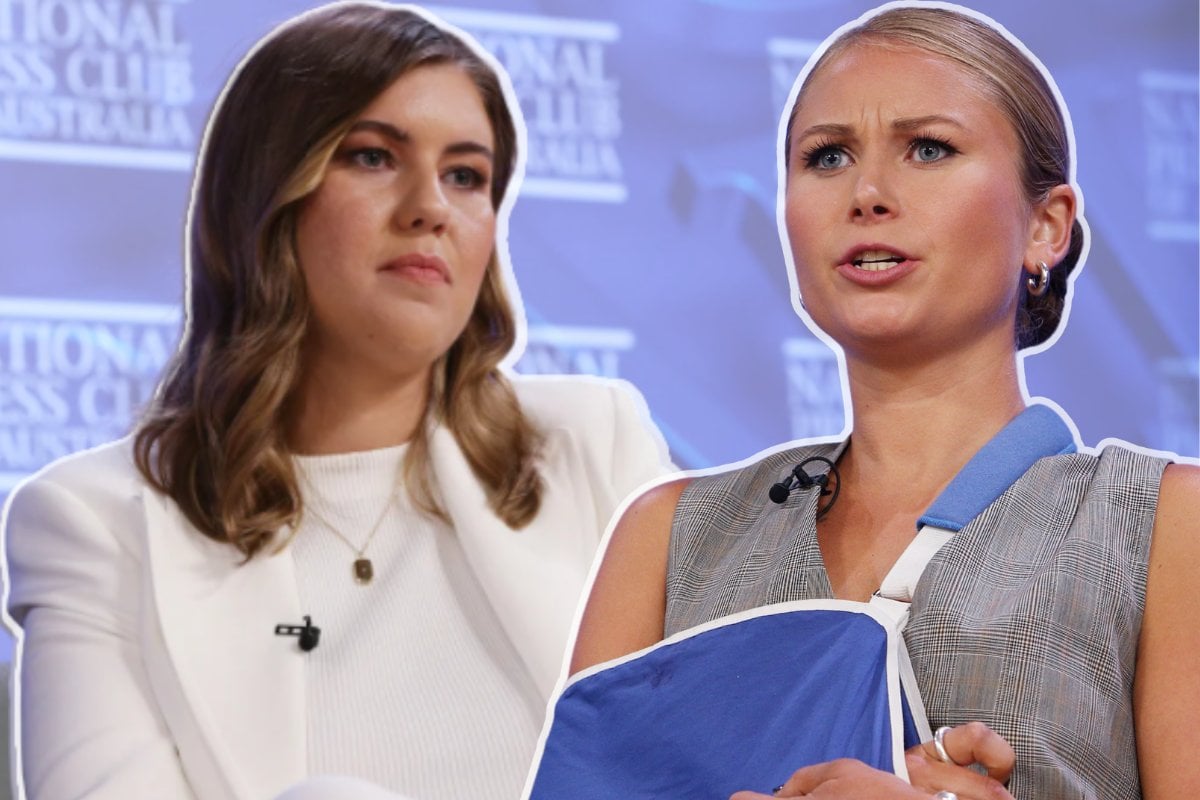 Grace and Brittany are on the front pages of every media organisation in the country. Image: Getty/Mamamia.

She called out the Prime Minister by name for his insensitive reaction to her story. She pointed out that "recognising that there's a problem" is 50 years short of what's required. She called out the fact that "task forces are great. Codes of conduct are important. But only if it’s paired with institutional change."

Grace followed with her own thoughts on Australia's lack of progress over the past year. She too called out the Prime Minister, accusing a senior member of government of threatening her not to say anything "examining" on the eve of the next Australian of the Year awards as she passed on the honour to Dylan Alcott.

She wasn't afraid to shine a light on the structures that have for so long swallowed women's stories. Buried them.

"The federal government’s approach to social issues seems to consist of nothing but empty announcements, placatory platitudes, superficial last-minute acknowledgements, and carefully staged photo ops. Facades and false hope. Reviews, reports, delays, and distractions — if not downright denials. All deliberate spin tactics designed to satiate the press and the general public," she said.

With every sentence. Every blistering allegation. Grace and Brittany didn't hold back.

It was the kind of moment in history; like Julia Gillard's misogyny speech. Like Alyssa Milano's Me Too reckonings, like Michelle Obama telling the world that when they go low, we go high, that hits a collective chord at just the right note.

These speeches. That moment at the National Press Club. Their words will be pored over by our children's children, recognised as a true turning point for women.

It was the kind of moment that rocks foundations to the core. We know that, because the Prime Minister's office immediately responded to the allegation about the threatening phone call, on the defence immediately.

To the government, Brittany and Grace are terrifying.

They are the new frontier of change, and they refuse to be silenced.

Grace and Brittany went in to bat for the rest of Australia yesterday, now it's our job to help make sure that moment changes history.

In the words of Grace, we need to keep making noise.

A
azzuri 3 months ago

Reply
Upvote
1 upvotes
Thank you ladies for not being silent!
M
mamma dog 3 months ago