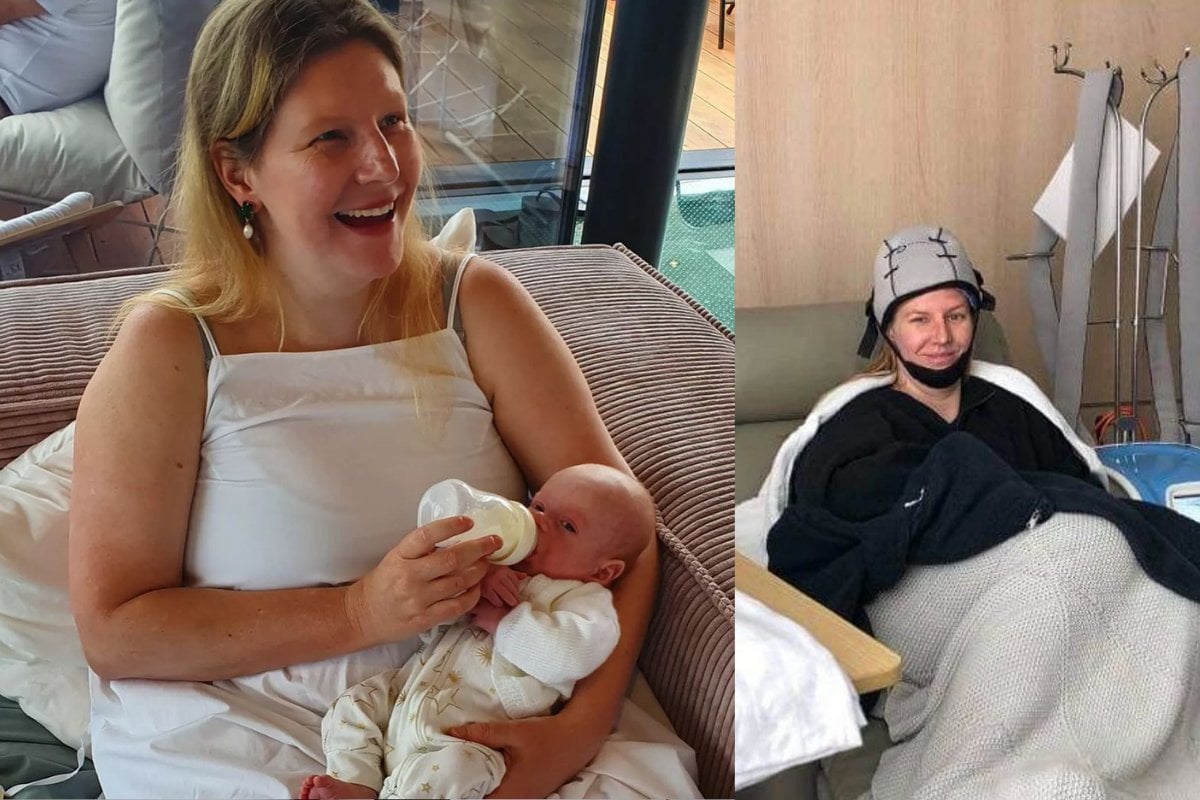 It started to feel as if life had finally starting moving forward for us.

I had experienced infertility due to PCOS and was prescribed medication to assist in ovulation. Our doctor previously told us that if a pregnancy did not happen, then the next step would be the daunting process of IVF.

Sometimes I I honestly didn't know if we would never have a baby.

Every month we waited with bated breath until I finally discovered I was pregnant. We were beyond ecstatic.

I didn’t know it then, but my infertility was building my resilience for the challenges that were to come.

It was during my second trimester, when I was 16 weeks gone, that I started to notice a difference in my breast. My right breast had become hot, red, swollen and sometimes painful. I switched the under wire of my bra for a maternity bra and I shrugged off the changes as being a strange part of pregnancy.

Watch Check your breasts - a quick How To! Post continues after video.

I made this assumption because I was young and healthy. I had never broken a bone, spent a night in the hospital or had an operation. Getting sick just wasn't on my radar.

My husband had noticed that my breast was becoming worse. My skin started to develop a dimpled and thick appearance like the skin of an orange and my nipple had become inverted.

The changes to my breast were noticeable but not overly painful and I continued with my normal life. I thought maybe I had a mild case of mastitis or a blocked milk duct and with time my breast would return to normal. I was about to leave my routine checkup with my obstetrician when my husband casually mentioned the changes in my breast.

I was told to have an ultrasound to further investigate and then I kept working and did nothing for two weeks. It was only with the follow up from my obstetrician and the urging of my mother that I booked the appointment.

Now when I think back on these moments, I cannot believe how ludicrous my poor attitude and carelessness was.

The ultrasound results were inconclusive, so I was required to undertake a biopsy. I was told at the appointment that the medical condition they were looking for was so rare and that I most likely had inflammation as it presented in the same manner, however; we needed to wait for the results.

I never asked my husband to accompany me to the appointment because I prioritised his work and I was at that time confident that the biopsy would be routine.

The doctor took three samples from my breast and lymph nodes. The pain was excruciating due to the inflammation and I let out a guttural scream as I clutched my stomach.

"It took me so long to fall pregnant," I cried to the technician. "I don't want anything to happen to my baby."

The biopsy was a reality check as to the seriousness and I started to have a nagging feeling of dread that something was wrong. My obstetrician called a few days later and told me that they found cancer cells.

From this moment my life as I had known it was over; shattered into a million pieces.

I was diagnosed with Stage Three Inflammatory Breast Cancer (IBC), a rare and aggressive form of breast cancer which does not involve a lump.

I was shocked as I did not have a family history (I was unaware at the time that I carried a gene mutation BRAC-2 that causes breast and ovarian cancer in women).

Most women who develop breast cancer have no family history. The cancer in a short period of time had spread from my lymph nodes to my breast and skin. If I had ignored the changes in my breast for longer and not proceeded with testing potentially, my cancer could have become incurable.

My oncologist advised me that I must commence chemotherapy immediately.

If I chose not to proceed with chemotherapy, I would be dead within six months. My oncologist also said I had three things against me, I had an aggressive cancer; I was pregnant, and we were at the start of a global pandemic.

There were difficult discussions regarding my pregnancy however, ultimately we pushed ahead with chemo, I would be heavily monitored and I could mostly have the same treatment the doctors would have given a non-pregnant patient.

As IBC is a rare disease it does not receive a large amount of funding or targeted research and the survival rates can be as low as 40-50 per cent compared to 'regular' breast cancer which is in excess of 90 per cent. IBC also has a tendency to affect younger women - I was 32 when I was diagnosed.

I think about the survival rates every day.

While you're here, listen to No Filter's episode on discovering you have the breast cancer gene. Post continues after podcast.

My future and the future of my family could rest upon the odds of a flip of a coin. The lack of advancements in IBC means that all the current patients (and the women who are to come) are left behind to flounder in uncertainty.

Every expectation I had about being pregnant was shattered. I never announced my pregnancy so many family and friends were told I was pregnant and battling cancer at the same time.

It was a mixture of joy, worry, excitement and sadness. As other mothers glowed, my hair began to fall out in clumps and my body swelled from the treatment. I felt really disconnected from the ideals of motherhood and I hid any physical signs of cancer (as much as I could) for fear of judgment. We delayed buying baby items for a period of time as we were worried about the future.

An ultrasound of my baby boy showed that his growth had slowed, and it was decided that he would be born five weeks premature by caesarean. My son weighed a tiny 1.8kg and spent two weeks in the special care nursery learning how to feed from a bottle by sucking.

I felt guilty that I could not carry my baby to full term to give him the best possible start to life.

Following my son’s birth, I completed the remainder of my chemotherapy, had a double mastectomy, radiation therapy and hormone treatment which has resulted in a chemical menopause. During treatments, I had to spend time away from my son and rely on my family for childcare.

My son will celebrate his first birthday on October 29, 2021. He is a very happy baby, and he is crawling! I had a PET scan last month which showed I have no signs of cancer, so I continue to be in remission.

I feel less fatigue as time goes by and I want to return to work next year. It is exciting to be able to make plans for the future.

Although my life has been difficult following my cancer diagnosis and I have pushed my body to physical extremes, I am extremely grateful for my second chance and that my son is healthy and continues to thrive.

Life is beautiful, messy, difficult and triumphant and it is in these moments that we truly learn what it means to live!