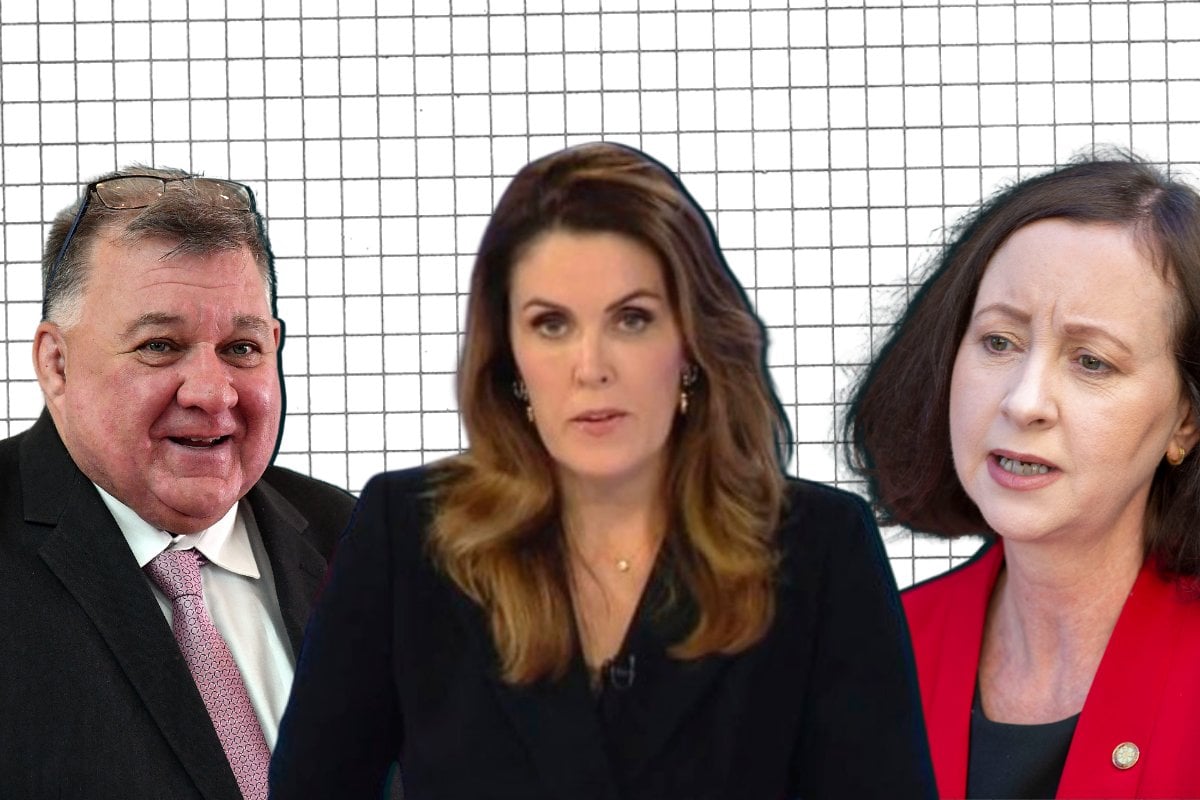 This is not going away anytime soon.

For weeks now, Canberra has been experiencing a reckoning; spurred on by the allegation from former Liberal staffer Brittany Higgins, who said a colleague raped her in Defence Minister Linda Reynolds' office.

Since then, a horrific number of women have come forward with tales of a toxic, sexist workplace at Parliament House, with thousands marching across Australia in March demanding change.

Listen: A Quicky episode to play the men in your life. Post continues below audio.

But it's not just Parliament House. We know there are cultural issues right across Australia, and state government ministers are also now telling their stories.

Here are all the fresh allegations to come out in the past day.

On Wednesday night, NSW Nationals MP for the Upper Hunter Michael Johnsen announced he was taking leave immediately while a police investigation into a 2019 rape accusation against him took place.

Earlier in the day, NSW Labor MP for the Blue Mountains Trish Doyle told the lower house an MP, whom she did not name, raped a sex worker after she did not consent to penetrative sex.

"It is all the worse that this man who raped her is a government member of this chamber ... his power and privileged position as a civic leader make that fear, anger and hurt all the worse," she said.

Doyle added she had been contacted 18 months ago by the sex worker who told her she had responded to an advertisement.

In one day, two women - Sue Hickey (Tas) and Trish Doyle (NSW) accuse colleagues of a. slut shaming & b. rape. What next? Will women MPs use the only space where not inhibited by defamation laws - the privilege of parliament - to call out misogyny & assault? What a prospect. https://t.co/OOCIXMh1Dm

"I am devastated by these allegations," he said in a statement.

"I have voluntarily spoken with NSW Police and I have and will continue to fully cooperate with their inquiries.

"I am confident any investigation will conclude that I am an innocent party."

NSW Police confirmed they were investigating allegations of sexual violence against a woman in the Blue Mountains in September 2019.

"The matter was reported and referred to the squad in late September 2020 and has been under investigation since," they said.

Early on Thursday morning, Nationals leader John Barillaro said he had "sought Mr Johnsen's resignation from his role as parliamentary secretary for agriculture and he duly resigned".

"Labor staffers, not just this Coalition man, and a number of others too."

She said she knew the identity of the man fired this week after a Channel 10 report into men videoing themselves performing lewd sex acts in their workplace.

"The man sacked by the Morrison Government this week for his disgusting acts on an MP's desk and its distribution on a little chat group. How do you even think about doing that sort of crap at work," Credlin said.

Peta Credlin claims she sacked the staffer involved in lewd behaviour with other men & promised he “would never step foot in parliament“ while she was there but was brought back by Turnbull admin. She also has a message for the “former minister” who slept with male sex workers 👇🏻 pic.twitter.com/2rufRt9hsF

She said because of her involvement, journalists were backgrounded that she was "a bitch".

"He never forgave me for it. He backgrounded to journalists about me that I was a bitch, too tough, all the things you've heard before.

"You never heard my side of it, did you? I sacked him and I said he would never be back again in that building. Turnbull rolled Abbott, I was gone and he was back."

She said she knew the names of others involved.

"The other three that Peter van Onselen broke in his story this week, I know who you are. I see you," she said.

"For years I copped hit after hit from unnamed sources. I stand by every decision I made. I would do it all again. And as a woman, boy I made some enemies. I have never publicly spoken about my side before.

"But I am not going to stay silent anymore."

Queensland health minister Yvette D'Ath has told state parliament she was groped by a visiting dignitary when she was working as attorney-general.

Last week, D'Ath shared her experiences with harassment and assault as a teenager and young woman on Twitter.

3/3 At 18 a male twice my age came into my workplace & while alone in the office in a back room tried to kiss me. I quickly left the room. I was shocked & shaking. He left without saying a word & so did I (for 32 years). This has to STOP. #March4Justice #March4JusticeBrisbane

She reflected on the response to this as parliament debated a motion condemning the harassment and assault of women and supporting a right to safety.

D'Ath said "keyboard warriors" replied to her tweets with comments such as "It must have been a blind man", and "No way, she's way too ugly for this to be true".

"And they wonder why women won't speak up? This is appalling behaviour," she said.

"If they want something current - well how about two years ago, as the attorney-general, when I was groped by an international judge at a conference in this parliament?

"This is still happening today. It has to stop," she said.

Liberal Senator Eric Abetz has been accused of slut-shaming Brittany Higgins and saying she was "so disgustingly drunk" she "would sleep with anybody".

Senator Abetz has categorically denied making the alleged comments which were aired by Tasmanian Speaker Sue Hickey under parliamentary privilege on Wednesday.

Hickey told state parliament she spoke with Senator Abetz on March 1 at a Hobart City Council citizenship ceremony and asked if the federal minister accused of a historical rape was Christian Porter.

"The senator quickly responded that yes, it was the first law officer of the nation, Christian Porter, but not to worry, the woman is dead and the law will protect him," she said. Porter has denied the allegations and is suing the ABC for defamation.

"He then said 'as for that Higgins girl, anybody who is so disgustingly drunk who would sleep with anybody, could have slept with one of our spies and put the security of our nation at risk'."

Abetz told a Senate committee he "rejected and categorically denied" the "mischievous assertions made under parliamentary privilege".

"To suggest that I'd make light of a rape allegation is horrendous," he said.

Abetz questioned the timing of Hickey's accusations and said she never raised concerns with him.

Hickey announced earlier this week she was quitting the state Liberals to run as an independent after being told she would not be endorsed by the party for the next election.

Abetz stated Hickey was "trying to destroy the party" on her way out the door.

Morrison said Abetz would continue in his roles on various committees, noting he had absolutely denied making the comments.

Hickey later returned serve in Tasmania's parliament saying she had witnesses to back up her account and had spoken about the conversation with senior Liberal members a few weeks ago.

"No amount of denial from the senator will remove the conversation from our community dialogue, or my clear and concise memories of the revulsion I felt at the time."

Kelly has denied knowing anything about allegations involving Zumbo until media reports first emerged in 2020.

"No specifics or no details of any allegation were ever put to me until recently," Kelly told 7.30 in a statement.

But Johns told 7.30 he had told Kelly about some allegations and concerns at least three times between 2016 to 2018.

"He knew what was going on. He knew the behaviour was unacceptable, and he kept ignoring it. Craig Kelly had a duty of care, which he's failed to fulfill."

Johns said he had also raised the alleged "treatment of young women" in the office with senior members of the party but met a dead end.

According to 7.30, at least seven women have provided statements to NSW Police about Zumbo's behaviour, alleging he was sexually inappropriate.

A seven-page statement from a former staffer, provided to the ABC by the woman, alleged Zumbo attempted to kiss her multiple times.

In June 2018, she alleged Zumbo exposed himself to her.

"I looked over at Frank and noticed he had taken his penis out of his zipper on his pants. I began crying while saying, 'Frank, I don't want to do anything like that. Please just take me home.' Frank tried to encourage me by saying, 'Come on.' But as I continued crying, he put his penis away."

The woman said she'd told Kelly about this after leaving the job in 2018, but he did not reply.

Zumbo has denied all allegations.

Reply
Upvote
3 upvotes
Peta Credlin. Wow, I never thought I'd say this, but you go, girl!
Abetz needs to go. As a Tasmanian, I am horrified every single time he opens his mouth.
G
gu3st a year ago

Reply
Upvote
3 upvotes
Craig Kelly swept disturbingly high level sexual harassment under the carpet?
Abetz displays very high level social dysfunction and a profound lack of empathy, yet again?
Why am I, and presumably, noone, surprised? The writing has been on the wall, in screaming, jagged crimson, for years.
How do these people present well enough to get elected? Craig Kelly was actually rescued from justifiably ending up on the scrapheap, and boy, is karma returning to bite LNP butt on that one.
I've never been a huge fan, but quotas are needed by the LNP. Maybe also pre-emptive mental health assessment.
I'm bi-partisan on this on though, if Labor needs to clean house, then clean house.
K
km a year ago

Reply
Upvote
@gu3st .... it’s an interesting point. I can’t stand Abetz or his views ... but he is my local Liberal member so I feel I get stuck voting for him. Voting Liberal is my preference... but I sure as hell will be happier when it’s not him !!!! Like being stuck between a rock and a hard place ... that’s probably what has kept him in the job unfortunately.
L
laura__palmer a year ago

Reply
Upvote
1 upvotes
@km Even if your preference is Liberal, please don't vote for him in the next election. He's a terrible person who needs to go.
G
gu3st a year ago

Reply
Upvote
@km I think that you're probably right (no pun intended). Maybe your electorate needs a Zali Steggall.
Is the corflute calling you, Km?
K
kolette a year ago