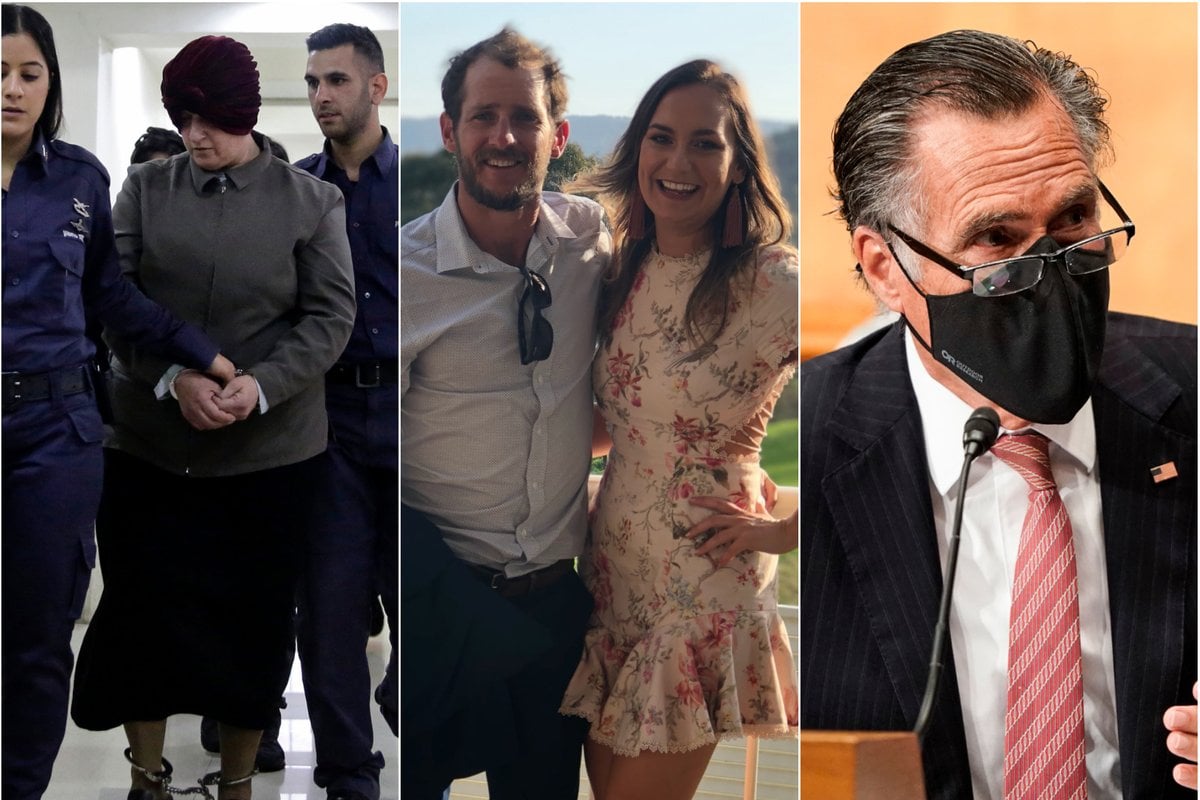 Former Melbourne school principal Malka Leifer will face a court on Thursday after landing back on Australian soil 13 years on from allegedly fleeing to Israel.

Leifer, escorted by Victoria Police, completed the final leg of her extradition from Israel on Wednesday night.

The ex-educator touched down at Melbourne airport aboard a commercial flight from Singapore at 8.44pm and was taken into 14-day quarantine.

It's taken 13 years, but accused paedophile Malka Leifer is now back on Australian soil - landing in Melbourne overnight following her extradition from Israel. #9News pic.twitter.com/1vNxUDmRxF

"The arrival of Ms Leifer in Australia will bring relief to alleged victims who have waited many years for this moment," Mr Porter said in a statement.

"It is now important that the legal processes are allowed to proceed in Victoria without commentary which could affect that process."

Leifer will face Melbourne Magistrates Court via a video link on Thursday for her first appearance.

It is expected 74 charges of child rape and sexual abuse stemming from her years as principal of Elsternwick's Orthodox Adass Israel School will be formalised during the hearing.

Leifer has previously denied all allegations.

After fleeing Australia in 2008, she was first arrested in Israel in 2014 only to be freed from house arrest on the condition she undertook psychiatric assessments.

An independent undercover investigation proved Leifer was feigning mental illness and she was re-arrested in 2018.

A teenager charged with murder after a couple was struck and killed by an allegedly stolen Landcruiser in Brisbane could also be charged over the death of an unborn child.

The 17-year-old from Logan, who cannot be identified, did not appear as the matter was mentioned briefly in the Children's Court on Wednesday and he was remanded in custody.

Family were left devastated after Brisbane couple Kate Leadbetter, 31, and Matthew Field, 37, were killed while walking their dogs on January 26.

Expectant mum, Kate Leadbetter, 31 and Matt Field, 37 were killed yesterday afternoon while out walking their dogs after a 4WD being driven by a male, 17 drove through a red light on Finucane Rd, Alex Hills and collided with a truck.
The teenager has been charged with murder. pic.twitter.com/Im41xTMwGa

Police are waiting for confirmation of Ms Leadbetter's pregnancy and Assistant Commissioner Brian Codd said there was provision for offences relating to the killing of unborn children.

Police allege the 17-year-old boy ran a red light and collided with a truck at an intersection before the 4WD rolled and ploughed into the couple who were crossing the road.

They both died at the scene on Finucane Road in Alexandra Hills and it's alleged the teen fled before stealing a set of keys from a nearby house.

A Facebook post on a Queensland lost pets page issued an urgent call to help locate the couple's dog, Frankie, that reportedly ran from the crash scene.

It's understood Frankie has now been found and a GoFundMe campaign has been started to pay for the dog's medication as she suffers from Addison's disease.

Queensland Premier Annastacia Palaszczuk has announced the border to Greater Sydney will reopen on February 1.

Speaking to Today Show, the premier confirmed the hard border lockout would end on Monday after the December 21 closure.

"The NSW border will reopen on the 1st of February," Ms Palaszczuk said.

"So it's a great time for families to be reunited, but also, too, for people to plan their holidays."

Coronavirus vaccine giants Pfizer and AstraZeneca are set to face a grilling from politicians hunting answers about Australia's immunisation effort.

The Senate's coronavirus response committee will on Thursday hear from two of the companies the federal government has struck a deal with for a combined 63.8 million vaccine doses.

There are concerns the rollout could be delayed with the European Union locked in a dispute with the pharmaceutical companies over supplies.

The European Union’s push to slow exports of the Pfizer and AstraZeneca vaccines has put Australia’s vaccine rollout under a cloud. https://t.co/OVTeKRMqXN

But the federal government insists the first Pfizer jabs will start late next month, with the company not flagging complications for the 10 million doses it is contracted to deliver to Australia this year.

In Europe, Pfizer is delaying deliveries, while AstraZeneca's initial shipments have been smaller than first promised.

The EU is planning to slap export controls on vaccines produced within its borders, including Belgium where Australia's Pfizer order is being made.

Therapeutic Goods Administration boss John Skerrit will give evidence about vaccine approval after Pfizer received the green light on Monday.

Rules on wearing masks and restrictions on gatherings and functions will soon ease across Sydney after the NSW government announced a raft of revised health measures.

A further easing of restrictions is also likely in a fortnight's time.

NSW Premier Gladys Berejiklian on Wednesday announced that restrictions would ease from Friday on gatherings and functions in Greater Sydney.

Rules on wearing masks and restrictions on gatherings and functions will soon ease across Sydney after the NSW government announced a raft of revised health measures.https://t.co/1eRDvPOh0z

Sydneysiders could invite up to 30 people inside their homes, while picnics and other outdoor gatherings - including in yards - can number 50 people.

Attendee caps at weddings and funerals have been lifted to 300 people, while caps have been removed altogether on corporate events, religious gatherings and hospitality venues. However the "four square metre" rule still applies.

Residents will continue to be obliged to wear a mask on public transport, at religious gatherings, in gaming rooms, at hairdressers and beauticians and while working in a public-facing role in hospitality venues.

Romney, in an interview with Minnesota Democratic Senator Amy Klobuchar on behalf of the Economic Club of Chicago, also said he shared hopes that the January 6 uprising at the US Capitol might lead to more bipartisanship, but said there's been no sign of any change in rhetoric.

Romney voted to convict Trump in the former president's first Senate impeachment trial last year and will be a juror in the upcoming trial in which Trump is accused of insurrection for allegedly encouraging the violent attempt by his supporters to take over the Capitol.

On Tuesday, the US Senate voted 55-45 to block a Republican effort to upset plans for former president Trump's impeachment trial.

Five Republicans joined Democrats to reject a motion by Republican Senator Rand Paul that would have required the chamber to vote on whether the trial violates the US Constitution.

At least 17 Republicans would need to join all 50 Democrats for Trump to be convicted, which appears unlikely to be reached. The impeachment trial is set to begin on February 9.

Despite a 90-year high in shark attack fatalities in Australia last year, new research has revealed almost three quarters of oceanic shark and ray species are headed towards extinction.

Using a model based on biodiversity indicators, scientists found the number of shark and rays inhabiting the open ocean across the globe has drastically fallen by more than 70 per cent in 50 years.

In just the last half-century, oceanic sharks and rays have declined more than 70%, mainly because of overfishing, according to a new study. “There is a very small window to save these iconic creatures,” said the study’s lead author. https://t.co/K1xFm7FSjm

The clear driver of the "alarming" trend was a doubling of fishing pressure and a tripling of shark and ray catches, the team of researchers from universities around the world concluded.

Eight Australians were killed in shark attacks in 2020, the highest number since 1929.

- Two further cases have been linked to New Zealand's 'COVID hotel'. Australia has not yet decided whether it will lift the pause on green-zone flights from New Zealand which is due to end at 2pm on Thursday.

- Norway will close its border to all but essential visitors, tightening further some of the toughest travel restrictions in Europe.

- The 2024 Olympic Games in Paris will go ahead as planned regardless of the fate of the Tokyo Olympics.

- The Cannes Film Festival will be postponed for two months to July 2021 because of the coronavirus pandemic.

- A global investigations team has disabled the infrastructure of Emotet, which is considered the world's most dangerous malware capable of stealing passwords and remotely installing malicious software.