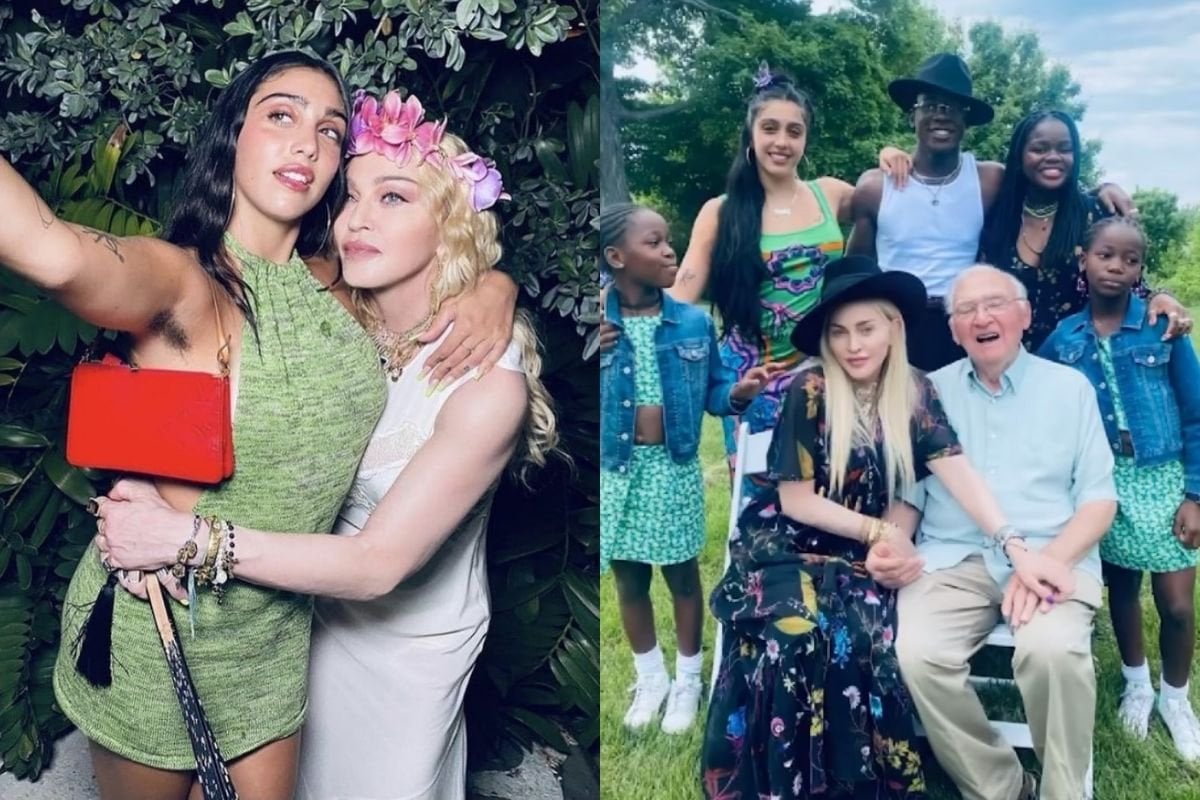 In celebration of her father's 90th birthday, Madonna recently flew to her home state of Michigan with five of her six children, throwing a low-key party at the family's vineyard.

She shared a post on Instagram full of videos and images detailing the family getaway, including a black-and-white snapshot of her hugging her father. But what really caught everyone’s attention was Madonna’s kids.

Rocco, 20, who Madonna shares with ex-husband and filmmaker Guy Ritchie, wasn't in attendance.

But one thing's for sure: Madonna’s kids – all six of them – sure are growing up fast. Here’s a look at what they’re doing now.

Lourdes, whose father is Madonna’s former personal trainer Carlos Leon, has been in the spotlight from a young age. She was a flower girl in that iconic 2003 MTV VMAs performance and also modelled for her mum’s Material Girl line.

Lourdes studied performing arts but has had most success as a model. As well as walking the runway, she’s featured in ad campaigns for Miu Miu, Stella McCartney and more. She’s been dubbed one of fashion’s “It” girls.

It brings back memories of Madonna kissing Britney Spears at the 2003 MTV VMAs, or stripping off for her 1992 book Sex, or... well, any number of other headline-grabbing moments in her career.

“I'm green with envy because she's incredible at everything she does," she added.

Madonna’s son with British movie director Guy Ritchie, Rocco has been through a bit of a rocky patch with his mum.

He went on tour with her when he was 14 and 15, even dancing in her show, but then decided he would rather live with his dad in the UK.

There was a custody battle, and at one point, Rocco took a dig at Madonna online. On a video of his mum with his siblings, he posted, “So glad I don’t live here anymore.”

In 2016, Rocco was arrested for possession of cannabis. However, he seems to have settled down since then, enrolling in a fine arts course and trying his hand at acting.

David was adopted from Malawi in 2006. He’s shown a talent for football, and at the age of 12, he won a spot in Portuguese football club Benfica’s youth academy. Madonna moved the family to Lisbon so he could take up the opportunity.

"I’ve been desperate to get him into the best academies with the best coaches, but the level of football in America is much lower than the rest of the world,” she told Vogue Italia.

In 2020, Madonna told British Vogue that she had more in common with David than any of her other children.

“What he has more than anything is focus and determination,” she said. “I’m pretty sure he got it from me.”

Mercy was also adopted from Malawi, in 2009.

In 2017, Madonna returned to Malawi to open the country’s first paediatric surgery and intensive care centre, which she named the Mercy James Centre. Mercy, clearly a fan of her mum, gave a speech where she described her as “the bomb”.

More recently, Mercy has been getting attention for her piano playing. Madonna regularly posts videos of her playing everything from Mozart to Chopin. The teen shows some impressive skills.

Madonna got to know the twin girls on her regular visits to Malawi and eventually decided to adopt them in 2017.

“Sometimes I would just close my eyes and just think, ‘Why isn’t my kitchen filled with dancing children?’” she explained to People.

Madonna got her dancing children. She regularly posts videos of Stella and Estere to Instagram, and it’s obvious they love to dance, sing and more.

In a recent video posted on Instagram, the two of them are seen 'directing' and 'acting' in a film at home. They both look almost scarily comfortable in front of the camera – just like mum.

Don’t you love it when celebrity kids grow up to follow in their parents’ footsteps?