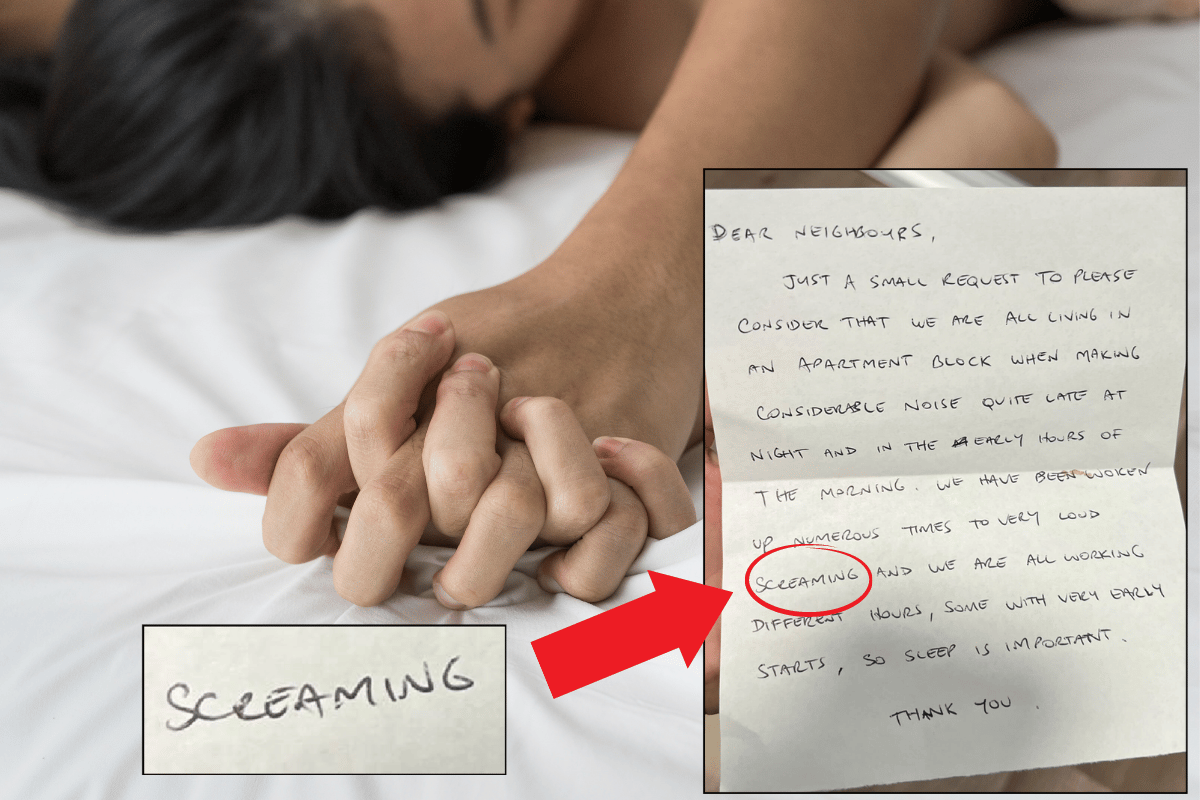 There are so many exciting things about moving into your own place with your partner. For one, you can walk around naked and two, you can finally have all the loud, joyous sex you've been holding off from having when you lived with other roommates.

Or so I thought. Turns out the whole loud, joyous sex thing may only be a luxury awarded to those in free-standing homes and unfortunately, we don't have one of those... yet.

You see, we live in an inner-city unit in Melbourne with about eight apartments in our building. It's renovated, but the original building is from the 60s. So I guess the walls are pretty thin.

Let me set the scene of what happened the other day.

My partner and I were about to go to bed when we spontaneously ended up having some rather passionate sex. And by passionate, I don't mean the slow, love-making, movie-esque sex where the only noises you hear are sighs and heaving panting.

It was passionate in a hot, sweaty, intense kind of way. That's just what gets us both off.

And isn't that a beautiful thing that we still want to rip each other's clothes off and have sex like that all these years into a relationship?

I thought so. But with this loud and enthusiastic sex comes a sense of unawareness.

In that moment, you're not thinking about what Joe and Susie over the hallway are thinking of your late-night antics, are you?

If you were thinking of Joe and Susie at all in that moment, then I doubt you'd be having an orgasm any time soon.

You're purely focused on pleasure. The feeling, the sensation, the connection between the both of you. Not neighbourly etiquette.

And we were made very aware of that the morning after when we found a note that had been slipped under our door. 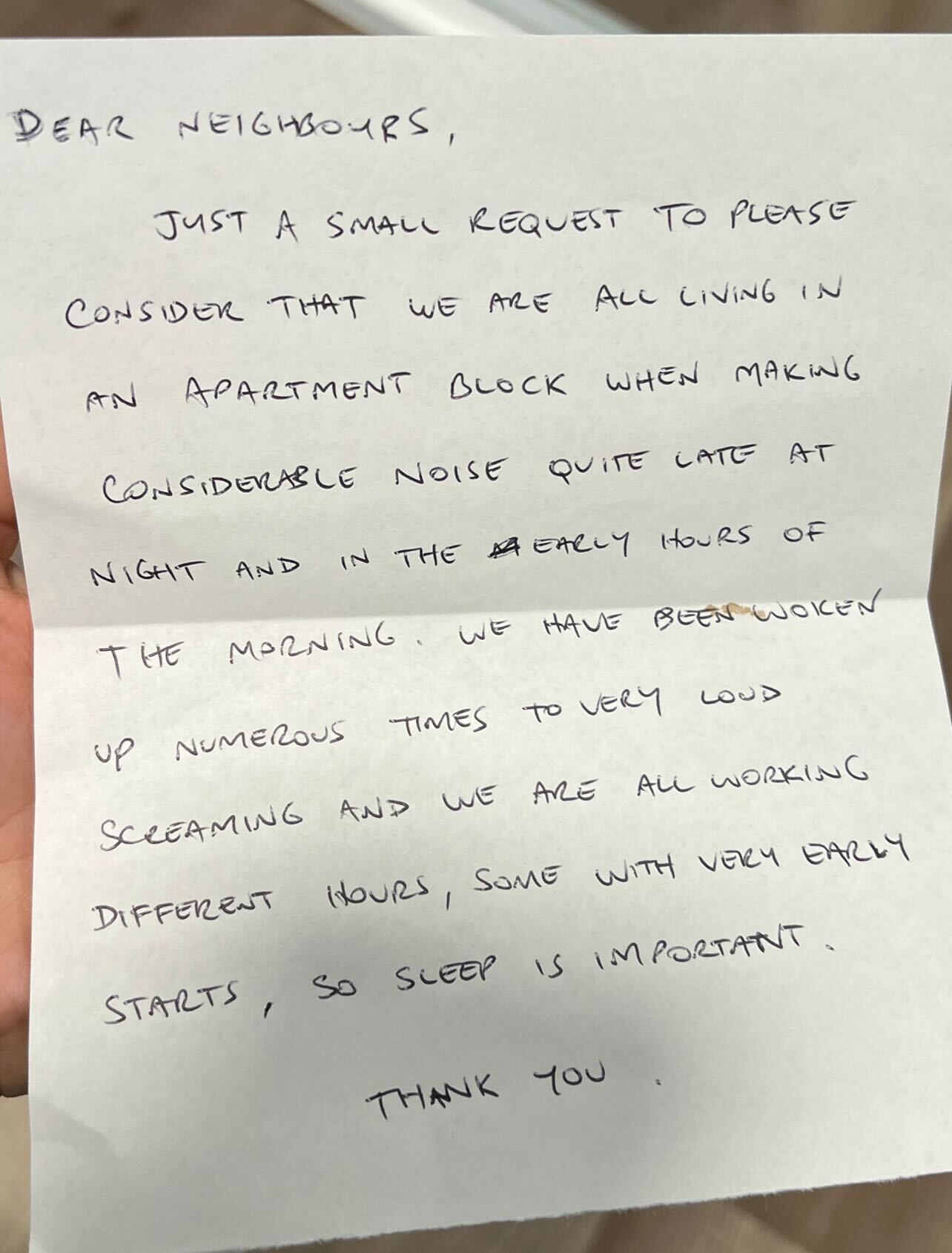 The letter we received the morning after. Image: Supplied.

Just a small request to please consider that we are all living in an apartment block when making considerable noise quite late at night and in the early hours of the morning.

We have been woken up numerous times to very loud screaming and we are all working different hours, some with very early starts, so sleep is important.

My initial thoughts were, that's actually quite polite of them. I've seen on social media many more passive aggressive notes and also ones with threats of making a noise complaint to building managers. So firstly, I was grateful it wasn't something worse.

My second feeling was that of complete embarrassment. I just assumed if we couldn't hear other people, then they couldn't hear us. But now I realise that they're just probably keeping it down. This is my first time living in a unit and I'll admit, I was a bit naive.

I know myself that if I heard that kind of 'screaming' coming from a neighbour (ok let's just call it what it is - it's moaning) - then I wouldn't be too chuffed about it either. So yeah, my partner and I both agreed that we felt a sense of shame about the letter.

But then came the third feeling. The feeling of - well, what are we meant to do about the loud sex?

So I thought of a few options.

1. Shove a pillow in my face - not ideal, slightly uncomfortable, makes me anxious about suffocating etc.

3. Only have loud sex during the day - not foolproof as lots of people are working from home.

4. Only have loud sex when we're in a soundproof hotel room - quite an expensive solution.

5. Move to a rural property - quite extreme.

6. Have sex whenever we want, including late at night, but be more mindful of noise levels.

It became apparent that the only viable option was number six.

But before I gave up on our loud sex for good, I decided to put it out to my social media audience to have them weigh in on the situation.

Also, I am aware that my audience are mostly younger, sex-positive people, but it did still help to reassure me that I'm not entirely a terrible person.

Here's what they said:

"Feels like more of a reflection of their sensitivity around sex and probably the fact they're not having sex like that themselves."

"It's great you're having plenty of awesome sex."

"Your partner's game must be incredible." (It is)

"Loud sex is typical in apartment complexes. That's just what you get if you live in one."

"I can't believe they complained. A couple have loud sex in our apartment building and I just put on some headphones and get on with my day."

"I'm a property manager in the inner city and it frustrates me when people in units complain about noise. If they don't like it, they should move to the 'burbs. In my experience, they're being a bit precious."

So, while these messages did reassure me, I don't want to piss off my neighbours anymore so we are going to try to work on being more conscious of noise.

Even if that does mean slightly less fun sex and maybe a pillow to the face or two.

R
redbett a month ago

Reply
Upvote
I think listening to someone having loud hot sex would be the ultimate turn on. I would immediately fantasise joining in, alone  with my toys.
S
simple simon a month ago