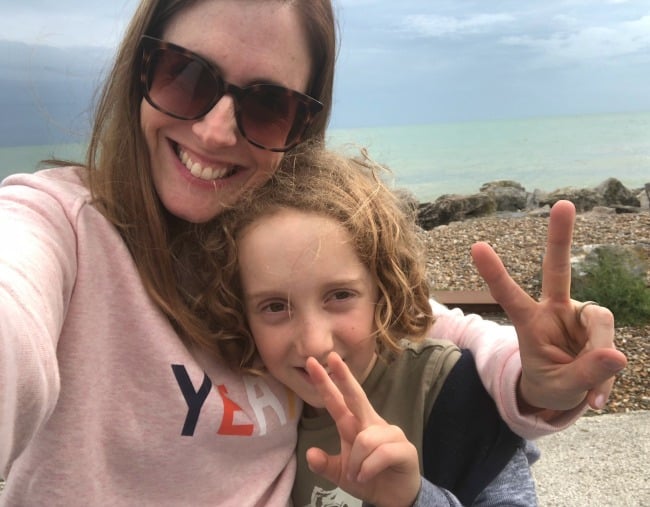 As a pommie expat living in Australia, I have travelled thousands of miles to visit family and friends back home, which is on the one hand a great privilege and the other hand, a hugely expensive pain in the bum.

I always found travel to be exciting with occasional moments of discomfort and boredom thrown in, but once I had children (Toby in 2010 and Leo in 2017) long haul travel took on a whole new level of stress-induced, sleep-deprived exhaustion. I have travelled with both my boys once in 2017 and we decided that it would be much easier (and cheaper) for this year’s trip home to see family, if I only took Toby and left our 18-month-old Leo in Australia with my husband Jules.

While there were moments of travel related annoyance around a lack of freely available Wi-Fi in rural France, it was mostly an amazing adventure. In fact, as Toby gets older I am starting to see through the nightmarish long-haul flights and can appreciate the many benefits of travelling with kids which I shall now explain:

1. Working on our patience.

There is a lot of waiting around when it comes to travel and like most seven-year-olds, Toby struggles with it and if I am honest, so do I.

From the hours we spent sitting around at the airport, to the 21 hours on the plane; there was plenty of time spent waiting for trains and buses, on car trips and even on board a ferry. I allowed Toby to use his iPad to get through some of the longer stints but we also had time to talk, play card games, read books and simply stare out the window. I-Spy was our favourite go-to game for waiting-in-line, and although there were some hair-pulling moments of frustration, I was proud of how well he dealt with being bored.

2. Witnessing the big wide world – warts and all.

Whilst the areas we visited in France and the UK may not look all that different to our comfortable home town of Newcastle in NSW, travelling through big cities such as London allowed for plenty of opportunities to talk kid-friendly history, politics and geography. Just some of the basics we covered in between demolishing Nutella crêpes and playing yet another round of I-Spy was the current prime minister or president’s name, the currency used and historic blood-thirsty battle sites.

Waiting to board our ferry at the port of Caen in France, we witnessed hundreds of refugees who according to the locals, were mostly escaping civil unrest in South Sudan and the Ivory Coast. Toby and I chatted about how sad it was that these people had to escape their home nations in search of a better life and we talked a little about war, poverty and even racism. I’m not naïve enough to think this alone will turn my Nerf-gun loving son into a pacifist, but I’m hopeful some information got through.

Travelling through various airports and terminals meant that Toby was often spoken to directly by officials and couldn’t always rely on me to respond for him. He confidently answered questions and used his own train ticket to get through the barriers whilst using the London underground and British Rail.

In France he was keen to try using the odd ‘bonjour’ and ‘merci’ and whenever he did, he received smiles of encouragement and great feedback, giving him the confidence to do it again and again.

There were too many moments to mention where I felt a fierce mother’s pride watching my little baby pulling his own suitcase along ahead of me.

Spending all that time together and sharing the excitement of a long-haul trip has been wonderful for our relationship which too often is bogged down with routine and unanswered ‘get-your-shoes-on’ exchanges, as we rush from one thing to the next.

I really enjoyed his company and relished the chance to see him bond with my dear family and friends who live so very far away. I was proud of how he not only dealt with the boredom and effort of our big overseas adventure, but also how he witnessed my stress, like when we nearly missed our train to London, and stayed calm. We now have plenty of funny shared anecdotes that relate to when mummy nearly lost her mind.

Now we are back into the work and school routine in Newcastle, our overseas trip together is a distant yet happy memory. I was surprised at how much fun and adventure we managed to pack into 14 days and while I am still slightly knackered thanks to jet lag, I am already looking forward to doing it again next year – hopefully with Jules and Leo in tow.

Have you taken your kids overseas? What do you think are the best and worst parts of overseas travel? Tell us in the comments section below.

Holly Wainwright speaks about the reality of being in a hotel room with small children on This Glorious Mess.

Please, please, please reconsider having your small children pull their own cute little wheelie bag in busy airport terminals and train stations! It might look really adorable to you, but having a small child skittering around pulling a bag in tow when you're in a hurry to get to a platform or gate is frustrating as hell - they're like unpredictable moving traffic hazards (essentially double in size thanks to the bag). If you're a regular traveller, you're doing us all a favour by keeping your kids close by and out of the road.

I travel a lot and to be honest, I have never really found this an issue. Let the little fellows feel involved, getting some exercise and you practice looking where you are going ahead more than a few steps to plan the best route. Fair dos I have a child now but it has always been unorganized scrubs at security or entitled/trying it on queue jumpers cause me more frustration than the odd child lugging a bag along a concourse.

Currently in Greece with my hubby and our gorgeous three year old. And to be honest it has been a lot of hard work. The toddler is most comfortable in the motel room (it’s a long way to come from rural NSW to hang in a room together!) The culture is amazing, the scenery and food are unforgettable but the life of parenting a toddler seems to be trickier all these miles from home. So looking forward to getting some red dust under the fingernails when we get home!

I second this, taking babies and toddlers long haul is hard work and they don't know the difference. They absorb a lot more when they are older, making those long haul trips much more worthwhile.

eh, my little one is three, speaks a little bit of three languages and if it has been a month or so since she last travelled o'seas, asks us when she is next going on a plane. When she does get on a plane, you tell her which seat and she gets in, puts her luggage under the seat in front of her, does up her belt and asks for juice (she does not normally get juice so maybe that little sweetener helps).
My sister's child that has not travelled much screams all the way up to altitude and screams all the way down - the thought alone is a harrowing experience for me and I wonder if he would have been a little bit better if he got some runs on the board while still very young.